I want to let everyone know that I will be stepping down as Chess Director of the Mechanics' Institute on January 31, 2022. These past 3+ years have been an incredible ride and a wonderful opportunity to contribute to the glorious history of the Mechanics' Institute's chess club. I'm proud of all the work we have accomplished in expanding events, growing scholastic programs, and creating program offerings like classes for the chess community, as well as our broadcasting of live events. Among my my most memorable moments are the 2019 Mechanics' Institute Rapid Championship sponsored by the PRO Chess League which drew 37 titled players, including 13 Grandmasters that included world #2 GM Fabiano Caruana and US Champion GM Sam Shankland. The broadcast of the event can be found HERE. US Chess article on the event is HERE. Also on the list is the tandem simul event with super GM's Shakhriyar Mamedyarov and Rauf Mamedov, broadcast can be found HERE.

My proudest moment was keeping our community together through the pandemic when everything was in lockdown through our online events. The value of the chess club can not be measured in words, and during a time of immense uncertainty and fear, where everyone was indoors, the chess club was accessible to all, with weekly events and programming, which included tournaments, arenas, interviews, classes, and chats.

Of course all of this would not have been possible without the hard work of the greatest chess team anyone could ask for. I am forever grateful to Judit Sztaray, FM Paul Whitehead, and GM Nick de Firmian for the their friendship, camaraderie, and teamwork throughout these years. We faced many challenges, and we met those challenges together as one. I can tell you that the energy, fun, passion and love for what we do in truly genuine, and it has been an honor to be a part of that at the club. We will always be a team, and I am forever grateful for that.

One of my biggest regrets in not doing more for the stronger scholastic players in the community through norm events or regular FIDE events that encouraged participation from stronger players. Perhaps this can be something to be considered in moving forward, as the chess community clearly needs this. It would be wrong to discuss the successes without touching on some of the regrets.

Most of all, I want to thank the amazing chess community at the Mechanics' Institute. My goal in coming here was to bring communities together through chess, but the lessons I learned from the community has been a greater education for me than I could ever have imagined. Thank you all for accepting me in, for giving a stranger a chance, and allowing me to learn and love the chess culture and people. It has given me a strong sense of perspective regarding the value of the history of the club, and the power of the newsletter and broadcasts as a source of connection between the people and history.

The number of people there are to thank are too numerous to list, and I'll be doing that separately. I will continue to be a part of the club, either in helping where needed or participating in events. This is not a farewell, but rather a new beginning, as I will begin an exciting new challenge taking everything I learned here and throughout my life to use chess as a social empowerment and community building tool for kids.

Thank you for all your support, and I will always be grateful for the opportunity to serve as the 10th Chess Director of the Mechanics' Institute. 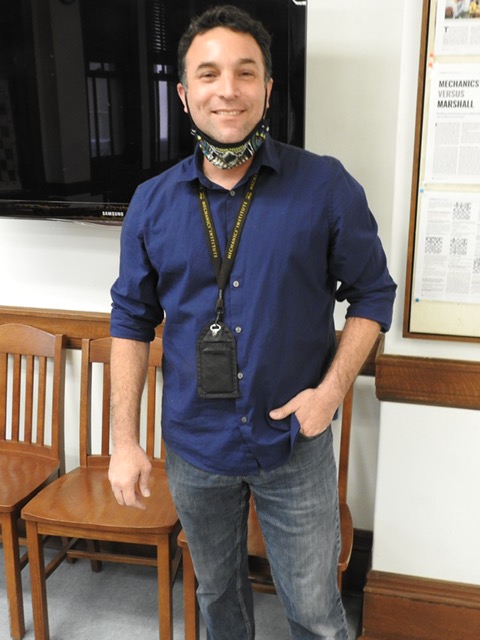 Bobby Fischer, after winning the US Junior held in the Castro at the Spreckels Dairy, spent a month in California. He then headed East in a car supplied by Guthrie McClain. William Addison was at the wheel with Fischer, Gil Ramirez, John Rinaldo and William Rebold as passengers. This was just before the establishment of the Interstate system so the 2500-mile journey was even more of a grind than normal. Driving through Nevada and Utah in the middle of the summer could not have been a picnic, especially with no air conditioning. At some point tempers flared, and the young Bobby, who got tired of being compared to Crusader Rabbit, lunged at his tormentor John Rinaldo, but accidentally sank his teeth into Ramirez's arm instead. Gil automatically responded by swinging at Bobby who showed up at the US Open with a black eye. Fischer went on to make his big breakthrough by winning the event.

A half century later Fischer's will was contested requiring him to be disinterred for his DNA. The test did not support the claim of a Filipino women that her daughter was Bobby's child, but maybe Gil Ramirez still has Bobby's DNA in him?

On page 119 of Bobby Fischer and His World, an endgame study is given which Fischer showed to the late Bill Haines of Vallejo and other participants in the 1957 US Junior. Haines couldn't recall who composed the study which is a perfect illustration that a queen cannot win by itself. Low and behold a few days ago, while studying Chess Tactics for Advanced Players by Yury Averbakh (a great book that is in the MI library and available for only $5 at US Chess sales in the clearance bin), I stumbled upon the exact study on pages 245-46. It was composed by P. Ilyin in 1947. 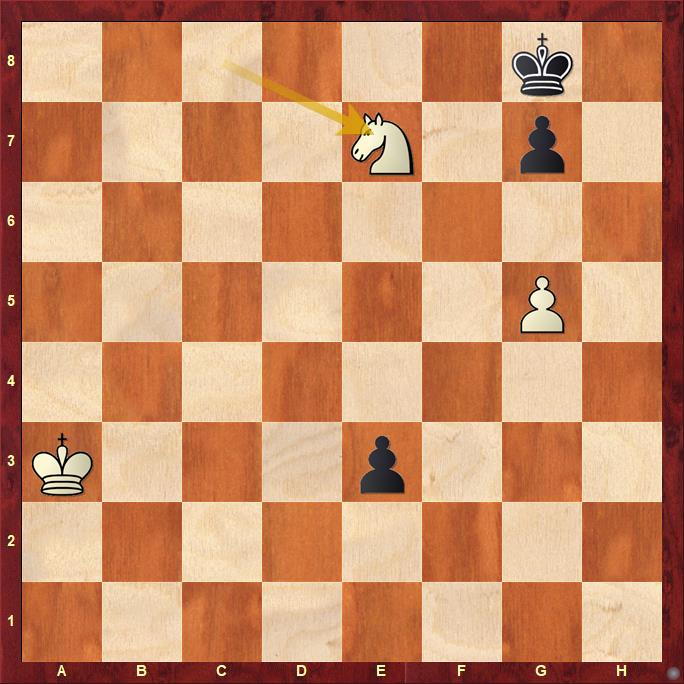 White to play and draw.

How can the pawn be stopped? Hint- it can’t!

Round 2 of the TNM is in the books, and IM Elliott Winslow continues to be one of the leaders with a win against Mechanics' veteran Kristian Clemens. Christophe Bambou walked into NM Michael Walder's preparation as Walder gets the win to go to 1.5/2 for the tournament. Jayden Xu continued his wizardry for a second week in a row, as he won on time again when his opponent William Gray began a calculation of the position and lost track of time. Larry Snyder emailed me last week and mentioned that this phenomenon should be referred to as chess rapture. His reasoning is as follows, in reference to last week's game against Lucas Lesniewski, "It is akin to the common term, rapture of the deep, one form of which occurs when scuba divers get so fascinated with and engrossed in their surroundings, they lose track of their tank's oxygen supply, with sometimes fatal consequences. Instead of being immersed in water, Lesniewski was immersed in chess, in the position on the board". I think a good case can be made that this term should be included in the chess vocabulary, and now it has happened two weeks in a row. Xu joins Winslow, Edward Lewis and Kayven Riese at 2/2.

43 players participated in the Bob Burger Memorial on Saturday January 8th. Joshua Lamstein was the winner of the 1800+ section with 3.4/4, which included a very impressive victory over Lucas Lesniewski. Lesniewski and Alejandro Canales tied for 2nd with 3/4. In the u/1800 section, it was a 3-way tie for 1st between Daniel Perlov, Andrew Ballantyne, and Jan Erik Solem with 3.5/4. Congratulations to the winners and thank you to all the participants for their support of the Mechanics' Institute. 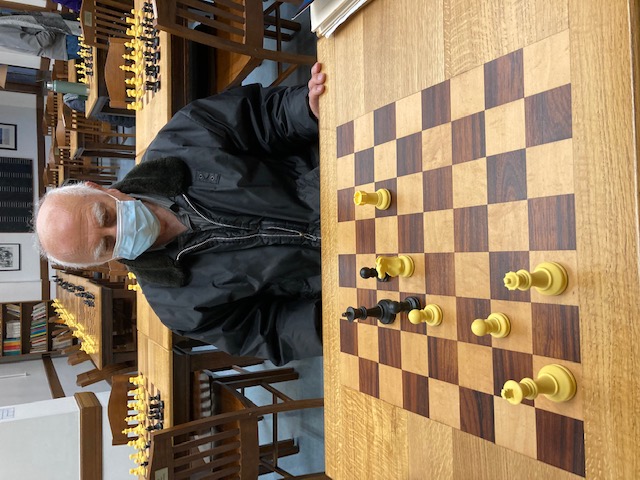 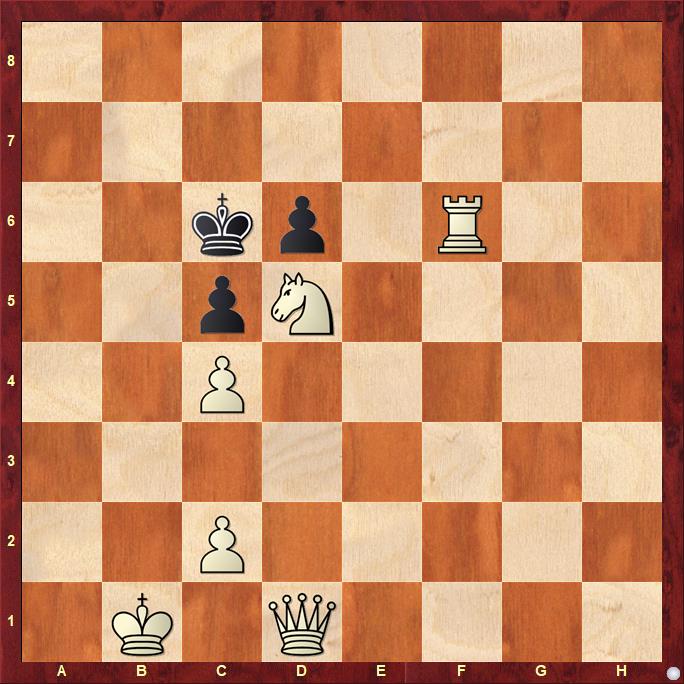 Ear to the Chess Board

It was a quiet week in chess, at least for those in the 2700+ bracket.  The next elite event is Tata Steel Masters in Holland which starts on January 15th.  San Francisco Bay Area maven GM Sam Shankland will be mixing it up with Carlsen and Caruana, et al.  The official website is here:

So on we go, bringing news of chess around the world.  The strange, the amusing, the sporting and the scientific.  The Royal Game is everywhere.

Do you like wasting time on your phone, but want to look smart?  The Onion suggests chess!

Making a difference in the lives of at-risk youth in Los Angeles:

We can never get enough of those chess and sport metaphors:

The ongoing fusion of man and machine is explored in Forbes:

The United States Chess Federation is moving to Saint Louis:

We love outdoor chess tables, and we love Ireland:

Paris Hilton, and chess in the slums of Africa:

Why is this one especially cool? We had Tunde Onakoya on our Mechanics'Chess Social September 4, 2020!

“The board is not set up correctly.”  Baywatch actress Alexandra Daddario gets called out by Indonesian IM Irene Sudankar.  GM Ian Nepomniatchi chimes in as well, and an invitation from FIDE ensues:

What will the new year bring for chess? I will give you a few predictions here – to start it should be a brighter, more interesting year than the last two. We will get lots of live events and the return of many classic traditional tournaments.

Who will win the Candidate’s Tournament this June in Madrid? The usual bet is to go with youth – the highly motivated up and coming players who live and breath chess. I’m betting against that. As good as world #2 Alireza Firouzja is and the great success of brilliant young Nordirbek Abdusattorov, I will anyway go with a veteran. My pick is our own Fabiano Caruana. After a narrow failure in the 2018 world championship match and a miss in the 2020 Candidates, I think Fabiano will be set to give his all this time for the quest. He certainly has the experience and talent and I believe his motivation will be peaked as his time is running out. The youngsters will be great, yet they are not ready for the ultimate battle this time.

The biggest question is who will win the year’s most important event? That’s not the Candidate’s or any super-event with Magnus. No, the great important tournament is the 50th anniversary of the Tuesday Night Marathon! Our club takes priority over those foreign events. You can also predict the winner and you may go with the all time leader of TNM victories, IM Elliott Winslow. I predict instead an unknown dark horse. Perhaps John Donaldson will decide to dust off his boots and enter the arena. Will Paul Whitehead venture into the melee? The TNM will be very special this year and even more exciting than usual. The under 1800 section will also be exciting. Will longtime trustee Mike Hilliard take a victory? The under 1800 section is even tougher though as new improving talents make their mark here first. I believe young Keven Sun will have a breakthrough year. My one surely accurate prediction is that this year will be a lot of fun at our club! We give a couple games below of these possible tournament victors.

31...Nf3+! A tactic to finish this fine positional buildup. 32.gxf3 Qxf3 The light-squared bishop shows its strength. White resigned as 33. Kh2 Rxd2 34. Nxd2 Qxf2 is mate next. I hope we see John playing again soon. Anywhere is good, but the TNM would be best. 0-1