One of the most underrated of USCF Masters is John Grefe of Berkeley, California. ...Grefe waits for time and fortune to give him international tournaments. Very much taken for granted, Grefe could be a monster on the international circuit, if given perhaps five warm-up tournaments in a short time. For now Grefe waits for his great chance, or any chance...

These prophetic words were written by Jude Acers in his introductory comments to the game Grefe–Commons, Fresno 1971. Two year later they came true when Grefe tied for first with Grandmaster Lubosh Kavalek in the 1973 U.S. Championship.

The 14th Bob Burger Open (G/45) will be held this Saturday at the Mechanics’ starting at 10 am.

The Mechanics’ Institute’s Winter Tuesday Night Marathon started last night with 75 participants, and more are expected next week. It’s still possible to enter the eight-round event with a half-point bye for the first round.

Seven Mechanics’ junior chess stars ventured to Al Ainthis last December to play in the World Youth Championship. The top finisher was Grandmaster Daniel Naroditsky, who was battling for first in the Under-18 section throughout the event before losing his last round game to finish on 7½/11 for2550 FIDE rating performance.

All the M.I. representatives in the Under-14 section turned in plus scores, with Colin Chow finishing with 7 points and Siddarth Banik, Vignesh Panchanatham and Kesav Viswanadha at 6-5.

Josiah Stearman started off like a rocket in the Under-10s with 7 from 8. He castled queenside at the finish to remain on 7 points, but this was still a very fine result.

The youngest M.I. representatives, Chinguun Bayaraa and Callaghan McCarty-Snead, competing in the Under-8 category, scored 6 and 5½ points respectively.

Mechanics’ Institute Grandmaster-in-Residence Nick deFirmian was selected to serve as one of the American coaches for the second year in a row, and worked with Daniel throughout the event.

The United States had two medalists this year, with Awonder Liang taking home gold in the Under-10s with 10 from 11. David Peng took silver in the same section.

International Master John Grefe died on December 22 at the age of 66 at Fort Miley Hospital in San Francisco. The cause of death was listed as kidney cancer.

Born and raised in Hoboken, New Jersey, John settled in the Bay Area in the late 1960s and except for a few years in Oregon never left. The next few Newsletters will take an in-depth look at the life and games of the 1973 U.S. Champion, the first Northern-Californian to take the title.

The Mechanics’ Institute will be hosting a tribute to John on Saturday, February 8, from 1 to 5 pm. All are welcome to attend.

Long-time friend Jeremy Silman has written his remembrance of John, which can be found at http://www.chess.com/article/view/john-grefe-talent-isnrsquot-enough.

Six-time U.S. Champion Walter Browne knew John for over 40 years and shares his impressions of the man at https://www.uschess.org/content/view/12477/735/ . John was Walter’s second at the 1976 Interzonal in Manila.

Go to https://www.dropbox.com/sh/d6nduh3eksjfl06/aJMoBmBxCe for some nice photos of John and friends taken by Suba Subramanian when he was visiting the Bay Area about three years ago.

The following interview by Richard Shorman appeared in the Hayward Daily Review on October 7, 1973, not long after John’s tie for first in the U.S. Championship with Grandmaster Lubosh Kavalek. It appears courtesy of Chess Dryad: www.chessdryad.com.

Catching most chessplayers by pleasant surprise, his national triumph actually represents only the best in a series of successes begun seven years ago.

Grefe’s comments on the event should be of interest to everyone who wants to see young American chess talent receive just compensation for superior performance.

Congratulations on winning the U.S. Championship! How did you do it?

The pairings were right, I had the right colors against the right players and I started out with a few wins against the lower half of the field, which helped my confidence.

In addition, I was playing well, was well prepared and I was doing a lot of meditating. My mind was very clear.

Why haven’t we heard from John Grefe before now?

Well, we have, actually. In big Swiss system tournaments that I have played in I have gotten fairly good results. I came in sixth in the U.S. Open this year, tied for eighth in 1969 and 1971, tied for first in the National Open in 1971, came in fourth or fifth at Lone Pine, 1971, and tied for fourth through sixth at Lone Pine 1973. My rating has been over 2300 for the past two years.

Young masters in the U.S. very rarely get a chance to compete in national events like the U.S. Championship, where they get to play against only top-flight competition and where playing conditions are conducive to high quality chess.

Do you think you would have done as well if Fischer, Robert Byrne and Reshevsky had participated?

I could have played as well, but I don’t know whether my result would have been as good. Even though the top three players in the U.S. did not compete, five of those who did are international grandmasters and one is an international master. Four of the players have taken a fair number of first and second prizes in international competition.

The U.S. Closed Championship includes the 14 highest rated U.S. players. Generally, a few players decline their invitations and substitutes are invited on the basis of rating. In the last several years there have been no real surprises in U.S. chess; the person who was supposed to win did.

What are your vital statistics in chess?

Age, 26. Birth place, Hoboken, New Jersey, but a resident of Berkeley for the past five years. I learned chess at ten, finally understood all the rules when I was 13 and began playing USCF tournaments when I was 15.

I won the first USCF tournament I played in, a local club event, and my first USCF rating was 2131. However, I have been playing tournament chess for only about seven years now, because for three years I was in the military service.

Was it right after your tour of duty, then, that the quality of your chess suddenly rose?

No, I came to Berkeley, and there happened to be a number of chess masters living there. We organized some tournaments among ourselves and occasionally played against each other in the various random local Swiss system events. I improved gradually as opposition improved.

What can you do as U.S. Champion to make it worth while winning the title?

I’ve never had great ambitions in chess, to be world champion or anything like that. I’ve just studied chess and whatever happens, happens.

Now that I am U.S. Champion, I hope to use my influence with the U.S. Chess Federation to assist other young masters to attain their titles and also to promote chess generally.

In relation to past U.S. Championships the prizes have been increasing at a steady rate. However, in another field of endeavor a person of equivalent status would receive a far greater financial reward for his work. Perhaps I’ll be able to make some money from exhibitions and lectures. I’ve always felt that it would be advantageous financially to hold a grandmaster title, and it would allow me to play chess against the world’s best players.

I think that the title of U.S. Champion carries a certain amount of prestige in relation to foreign tournament organizers. Perhaps when the news of this tournament reaches them and they play over some of the games, they will be anxious to invite me to play in their tournaments. My initial results in European tournaments will be important, as if I do well it will confirm my result in the U.S. Championship.

I’m going to be playing in the second section of the Hastings Christmas Tournament this year, and the winner is automatically qualified for the premier event next year. I will also be playing in the Beverwijk master event at the beginning of 1974. But these are not exactly plums for a U.S. champion.

How were the playing conditions and organization of the U.S. Championship?

Playing conditions were excellent. We played at the Hotel Paso del Norte in El Paso, Texas. George Koltanowski was the tournament director and William Lukowiak was assistant director. They both did a fine job. The lighting was good, too.

The organizers were a bit disappointed at the low turnout of spectators, but this was not so disagreeable to me, as my experience has been that most spectators at chess tournaments are unaware of proper behavior and merely distract the players with excess noise.

Although local coverage was excellent, the tournament was poorly covered in the national press. Col. Edmondson, director of the national chess federation, says the reason for this is that reports were sent every day over the wire services, but the editors of individual newspapers have the discretion of whether or not to use the reports. If the chess public wants better coverage of chess events, they will have to deluge their local media with requests for news.

Can you say anything about the performance of Walter Browne and James Tarjan, also of Berkeley?

They both played well and generally their performance was rather high.

Tarjan might have added another point to his score had he made full use of his opportunities. He suffered an early loss to Mednis that hurt his chances for a higher place in the final standings.

What are your interests apart from chess playing?

I would like to learn a few foreign languages. I may author a book of the tournament with background material and annotations to most of the games.

I’d like to go to the Soviet Union in order to gain insights into their chess sub-culture and also to promote closer relations between the chess federations and players of our countries. I am a devotee of Guru Maharaj Ji and I spend a lot of time doing meditation and propagating his Knowledge.

John was 17-years-old when he first came to the attention of the chess world in the summer of 1966. In June of that year he won two remarkable games at the Marshall Chess Club Open that caught the eye of the legendary Hans Kmoch who annotated them in his monthly column in Chess Review.

The first to appear in October 1966 was prefaced with the following introduction: This game serves to introduce a new talent, John Grefe of Hoboken, a boy of whom more certainly will be heard.

This seems to give Black the advantage for if the queen retreats, simply 8...dxc4. But White has prepared a surprise for his opponent. 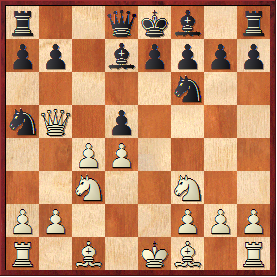 The point of the previous moves.. 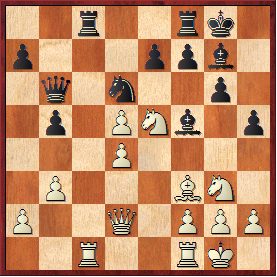 3) The Clock, by Dennis Fritzinger

the clock is a
wizardly device
that runs on electrons
like trained mice,
but in my day
it was one of those things
that ran, instead,
on gears and springs.
when you were trying
to play chess quick,
one of the buttons
would always stick.
and sometimes, ahead
of its time, the flag
would fall and you’d lose—
like a fall from a crag.
you’d have to wind it—
wind? what’s that?
and a blow from a hand
might knock it flat.
it would always sit
by the side of the board,
sometimes doted on,
sometimes ignored.
what went on
on the chessic plain,
due to chance or duel
of brain to brain,
was often decided
(what a shock!)
by the whimsical, fickle,
deadly clock.