Is a person better off using one engine or several engines when analyzing?

The three engines he refers to are Houdini, Stockfish and Komodo.

The penultimate round of the Spring Tuesday Night Marathon was filled with fighting chess but in the end the top three boards all were drawn. This enabled NMs Natalya Tsodikova and Romulo Fuentes to join IM Elliot Winslow and over-achieving Experts Steven Gaffagan and Bryon Doyle in a tie for second with 5½ points from 7. FM Andy Lee continues to lead the 88-player event at 6 points, with one round to go.

From round 7 of the Spring Tuesday Night Marathon:

The Mechanics’ Institute Chess Club has had many distinguished visitors in its over 150 year history. Among them was Henry Nelson Pillsbury whose exploits were covered in the San Francisco Chronicle in April 1904. This is the first of a two part series.

Harry N. Pillsbury, American Chess Champion, left San Francisco Thursday last (April 14th), and after a short stay in Denver he goes East to participate in the great international chess masters tournament, which opens at Cambridge Springs, PA, April 25th. Pillsbury’s engagement here lasted a week, and the local chess enthusiasts were provided with a chess feast such as they will not soon forget. His blindfold exhibitions in particular, astonished all who saw him in action. He became quite popular here, and his genial unaffected manner won him a host of friends who will watch his future chess career with added interest, and all hope to see him emerge from the struggle at Cambridge Springs with top-notch honors.

Pillsbury asked $200 for his week’s engagement with the Mechanics’ Institute Chess and Checker Club, but the club did one better and gave him $250. Much credit is due to N.J. Manson, H.K. Eells, Wallace E. Neville and T. L. Lyon for the able manner in which they handled the financial arrangements.

Dr. W.R. Lovegrove’s victory over the champion last Sunday (the 10th) has created quite a furor in local chess circles.

This afternoon a match game between Champion Pillsbury and Dr. W.R. Lovegrove, the well-known local chess champion, will take place at the rooms of the Mechanics’ Institute Chess Club, Post street.

Play will commence at 2pm. If time suffices, Pillsbury will also play individual games with N.J. Manson and Oscar Samuels, two prominent local experts. The encounters will be well witnessing and are sure to attract a big crowd.

Yesterday afternoon Champion Pillsbury met the local experts in simultaneous play at the Mechanics’ Chess Club. At chess he played against five different teams, and also negotiated five games of checkers at the same time. He won four of the chess games and lost one. At checkers he drew six, won one and lost one.

A departure from the usual play of doubtful value, for after the exchanges which follow Black obtains a predominance of pawns on the queenside and this commits White to a kingside attack.

Houdini 3 prefers 10.Re1 with a slight edge for White.

Best! It is extremely doubtful the knight’s pawn can be safely captured.

A necessary move to dislodge Black’s knight, and also provides an escape for the king.

After considerable analysis Mr. Pillsbury came to the conclusion he would have done better playing: 24...Ne6 but Dr. Lovegrove suggests the following probable continuation which seems to prove White would still have retained an advantage: 25.Nfd5 Kh8 26.Rcb1 Qd2 27.Rxb7 (Houdini 3 assesses the position after 27...Reb8 as equal).

Houdini 3 judges this to be the losing move suggesting instead 26...Qe5 with equal play.

3) The Triumphant March of Black’s King Pawn, by Fred Wilson

Editor—A glance at the crosstable of the Dr. David Ostfeld Memorial, a one-day event held in Hackensack, New Jersey, on March 31, would reveal that three players tied for first. The first two, GM Sergey Kudrin and 2013 New Jersey champion Alexander Katz, finished as expected, but number three was a shocker.

Fred Wilson of New York is well-known as a book seller, author and teacher, but few think of him as a player. They would be wrong. Fred loves the game and studying it. He likes nothing better than to attack, and that is just what he did at the Dr. David Ostfeld Memorial, collecting the scalps of two masters on the way to a USCF performance rating of 2540 and sharing first with GM Kudrin and NM Katz.

Here the 68-year-old Expert (who picked up 48 rating points to raise his rating to 2147) shares his favorite game from the event.

I allow him to transpose into sort of a Kavalek Variation, although 5…e5 or 5…c5 may be stronger.

Whoa Nellie! Now he wants to simply play Qd2, 0-0-0, Bh6, push pawns on the kingside and mate me! Gotta do something!!

I thought a long time here and came up with…

Which after this move must be followed by…

But 27. bxc3 allows me to trade off everything, remaining a rook ahead, after 27…Bxe4.

We were saddened to learn that the Chicago African-American Senior Master Morris Giles died in 2012. On the chance that others missed this information at the time we encourage them to check out an excellent tribute by Dr. Daaim Shabazz at http://www.thechessdrum.net/blog/2013/01/03/morris-giles-chicago-legend-1953-2012/

Noted chess historian Eduardo Bauza Mercere, who has been doing work on the history of the US Opens, recently rediscovered the following tactical slugfest. Notes are written with the assistance of Houdini 4. 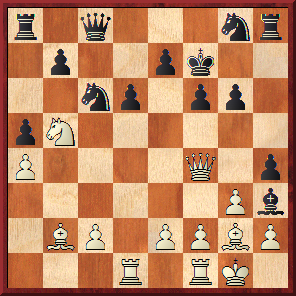 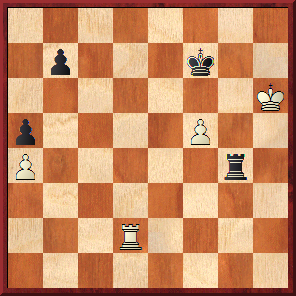 The United States and Soviet Union national teams first met in a famous radio match in 1945 that marked a changing of the guard. The Americans were the dominant teams in the Chess Olympiads of the 1930s (in which the Soviets did not compete) while the USSR would take over as top dog from the 1950s to the breakup of its empire in the early 1990s. Russia, led by Garry Kasparov, was dominant up until 2002, but when he stopped playing things changed. Despite being the top seed they have not won in over a decade, with Armenia (three times) and Ukraine (twice) winning the last five Olympiads.