The first-time chess player who makes the right move based on his feeling for a certain piece is probably experiencing luck, not intuition. But when a knowledgeable player finds the best move simply present in his mind without combing through hundreds of variations, that’s the power of intuition.

FIDE Master Andy Lee defeated newly minted National Master Uyanga Byambaa in round six to reclaim the lead in the Jay Whitehead Memorial Tuesday Night Marathon. Lee has 5½ from 6 (he took a half-point bye in round five) and is trailed by half a point by Byambaa, International Master Elliott Winslow, and Experts Natalia Tsodikova and Pranav Nagarajan. Three rounds remain for the 86 competitors.

From round 6 of the Whitehead Tuesday Night Marathon:

Here is the key game from round 6. You can find this game and others from the round in PGN format at http://chessclub.org/.

Now the game starts to enter uncharted territory. 9...Bc5 and 9...Nb7 have been played more often. 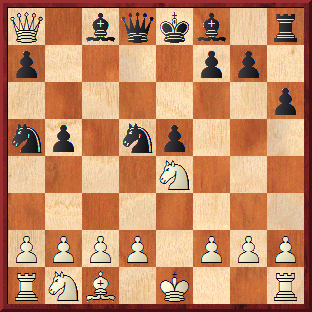 The test of Black's play may well be the direct 11.Nd6+ Bxd6 12.Qxd5 when it is not at all clear if Black has enough for the sacrificed exchange and two pawns after 12...0–0 13.Qxb5 Bb7 14.0–0 . Black has a lead in development but the offside knight on a5 renders his position extremely problematic.

Material may be equal but Black's lead in development and active minor pieces promise White's king will not have an easy life.

Andy correctly brings his problem knight on a5, the bane of many a Two Knight's defender, back into the game.

The direct 15...Nd4 was also attractive.

White has seemingly survived the worst of it, but still is suffering as it is hard to activate her rooks. 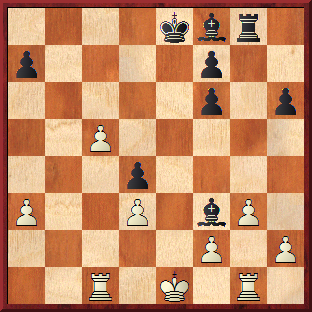 White is only playing with one rook.

The San Francisco Mechanics’ won their third round matchup with the New England Nor’easters by a score of 2½-1½. Grandmaster Daniel Naroditsky and FIDE Master Cameron Wheeler were the stars for the MI, with wins on boards one and three.

Go to http://uschessleague.com/ for more information. 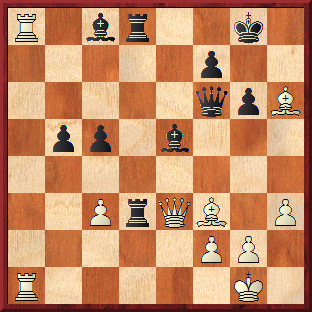 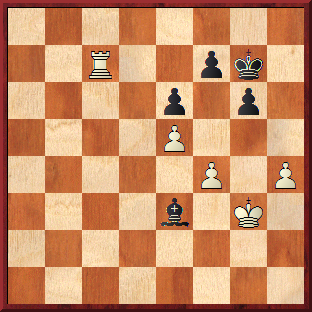 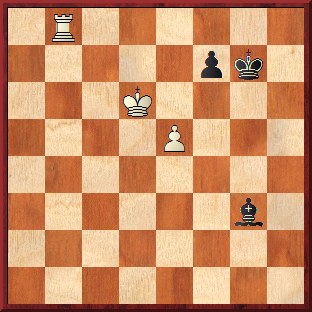 Wednesday Night Blitz is back at the Mechanics’ Chess Club under the direction of Jules Jelinek. He reports:

Hi everyone,
At the Wednesday night blitz last week (September 3rd) , we had 10 players. The results were

Congratulations to International Master Elliott Winslow, who won the Berkeley Chesss Club Marathon held between July 25 and September 5. The Mechanics’ instructor for its Saturday Chess Program for Kids scored 5½ from 6 to top the 26-player field. National Master Roger Poehlmann was second with 4½ points.

Los Angeles chess players covered themselves with several hues of glory yesterday by administering to the San Francisco Chess club the first defeat in its history. Six boards were played over a leased wire of the Postal Telegraph Company. The Los Angeles players gathered at the rooms of the Los Angeles Chess and Checker club and the San Francisco team played at the Mechanics’ Institute, in that city.

The northern players were hard losers, and when they found that the redoubtable Kendrick, their premier player, in an effort to force a drawn game into a win, had run up against a combination which cost him his queen, they raised a howl and sent a sizzling message down, saying that W. S. Waterman, his astute opponent, was making impossible moves.

A perusal of the recorded moves showed this contention to be incorrect; then they substituted a claim that Judge Kendrick had made one move on his board and had given another to the telegraph operator. President Greenwood telegraphed back his regrets that such an unforeseen occurrence could have happened, but stated that in accordance with the rules of telegraph and correspondence play, his moves could not be retracted, and asked that the play continue. The San Francisco players refused to hear to this. Then President Greenwood proposed that a statement of the case be submitted to the New York Clipper for final decision. To this the northern players gave a grudging assent, and the official announcement of the result of the match will not be made until the editor of the Clipper is heard from.

Play commenced at 10 o’clock in the morning and the last telegrams were exchanged at 8 o’clock in the evening. Actual play ceased at 6 o’clock, but the remainder of the time was spent in San Francisco’s trying to get a readjustment of Kendrick’s lost game. E. R. Wickersham, at board six, played a dashing attack against Neville’s Sicilian defense and soon had his opponent in difficulties. He pressed his advantage home and had his opponent’s resignation before the other games were fairly started. Northrop, at board five, was not so fortunate. He was forced to play the defense to Dr. Lovegrove’s celebrated attack in the Ruy Lopez. For a time he was able to withstand the attack and keep an equal game. Shortly after one o’clock he made a couple of hasty moves in order to keep within his time limit, and Dr. Lovegrove took advantage of them to force an opening through Black’s center and followed his advantage up a few moves later by winning: a piece. Realizing the futility of continuing a contest at such odds against a player of Dr. Lovegrove’s caliber, Mr. Northrop resigned his game at the thirtieth move.

C. W. Waterman, at board four, won a comparatively bloodless victory. This was Yerwartt’s first appearance in match play and he played as if he had a bad attack of fright. He lost a piece early in the game and allowed two more to be spirited away from him before the afternoon was half over. There he seemed to realize that something was expected of him and he fought away with a hopelessly lost game until the referee requested him to resign.

Table three was the scene of the hardest fought conflict of the day. S. C. Candler, champion of the L. A. C. C. club, was defending a Sicilian against W. Manson, the most brilliant gambit player in the West. At the end of the forenoon’s play neither player had gained any advantage; in fact, up to the thirtieth move it was anybody’s game. At that stage Manson sacrificed a knight for two pawns and the attack, expecting to gain a tactical advantage, handler accepted the sacrifice and by a brilliant combination forced White to an exchange of queens that left Manson with a lost game. Two moves later, however, Candler made an error in recording one of his opponent’s moves, which led him to place one of his rooks en prise. This gave Manson such an advantage that two moves later Candler resigned what should have been a won game.

R. B. Griffith, at board two, played a spirited attack against Howe’s Queen’s Gambit and at the fortieth move had a won game. Here he tried for what looked like a grandstand finish, only to find that he was one move short in his combination and he only succeeded in drawing with a piece short, a game that a less brilliant player would have won easily.

The contest on board one was a surprise. Here W. S. Waterman played his first tournament game against Judge Kendrick, one of the veterans of the San Francisco team. For forty-seven moves he defended a Ruy Lopez in so able a manner that his opponent could make no headway. Nettled at this unexpected defense Judge Kendrick tried a queen sacrifice that did not turn out as he expected, and left him with a lost position; then came the insistence that he had made an error in recording his moves, and the dispute that has been referred to the New York Clipper for adjudication. The Los Angeles players are a unit in their assertion that there is nothing for the Clipper to decide. The American chess code plainly states that in all cases of a disputed move the one that the player sends his adversary must stand. The play was of a high order throughout and the Los Angeles players are justly proud of their brilliant victory.

The following game was contested during the match:

Remaining moves unplayable. White is completely winning at this point but the game was eventually drawn.