He was a pitiful sight to behold. Over and over he calculated and miscalculated the variations, and couldn’t understand how I could save myself. Of course he couldn’t—he was looking for something that wasn’t there.

—Anatoly Karpov, quoted in The Inner Game of Chess: How to Calculate and Win,
by Andrew Soltis, revised edition, p. 300 on a Candidates’ Match game
he managed to draw from a lost position against Lev Polugaevsky

Three rounds into the Winter Tuesday Night Marathon International Master Elliott Winslow, National Master Tenzing Shaw and Expert Josiah Stearman have the only remaining perfect scores among the 111 participants. It is still possible to join the eight-round tournament with three half-point byes.

Mechanics’ Institute Grandmaster-in-Residence Nick de Firmian has compiled the following attendance statistics that track the growth of the Tuesday Night Marathon from 2000 to 2014. There are five tournaments a year - typically eight rounds each.

The January 2015 FIDE rating list has two Americans in the top ten.

MI member Sam Shankland has been rated around 2650-2655 the past month and has been moving in and out of the top 100 live rating list on a daily basis.

No Americans are rated in the top 10 female players in the world, but MI member Daniel Naroditsky is one of the best junior players (under 21) in the world.

The Czech Benoni in Action, by FM Asa Hoffmann and Greg Keener, has an interesting anecdote on page 79 about the late Jacob Yuchtman and longtime Mechanics’ member Stephen Brandwein.

“I first met Yuchtman in 1973 at the Chess and Checker Club of New York, commonly known as the ‘Flea House’. I remember a short, stocky man with a smile like a Cheshire Cat, but when he was displeased with something, a dark cloud would come over his face. A brilliant blitz player, there was no one to compete with Yuchtman at the Flea House and he soon moved to ‘The Game Room’ at West 74th St. Here, one could play chess, Scrabble, backgammon, and gin rummy day and night. The resident champion of The Game Room was master Steve Brandwein. He and Yukhtman would play countless hours of blitz with about equal results. I sometimes played these two myself, but could only manage to win about 25% of my games against either of them. ...”

International Master Boris Kogan, who died of colon cancer on Christmas Day in 1993, is best remembered for playing in three U.S. Championships and winning the Georgia state championship seven years in a row (1980-1986). He was also the coach of Stuart Rachels, helping him advance from being a young national master to sharing the U.S. Chess Championship. What isn’t so well known is that Kogan was a very promising player (Soviet Junior Champion in 1956 and 1957), before making the transition from player to coach at a very early age.

The 1974 Southern Open still ranks as one of the biggest and strongest ever held in Nashville. It ended in a five-way tie, in this order:

This information and the following games were supplied by Peter Lahde.

The following position occurred in Sherwood–Kolla. With the black king unable to get to b7, Black shuffles his knight between a8 and c7. How should White proceed? 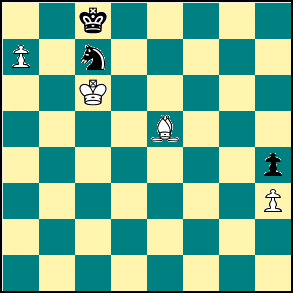 Obviously, White cannot win by taking on c7, because Black will be stalemated (in the game, White made this mistake).

Black cannot capture the pawn unless the king gets to b7, so White wants to keep him from doing so. There are three squares from which White controls b7: a6, b6 and c6.

While Black is playing ...Na8-c7-a8, if White can arrange to have his king on a6 or b6 when the knight moves to c7, he can safely capture it.

This is the same position, but without the h-pawns. Can White win this? 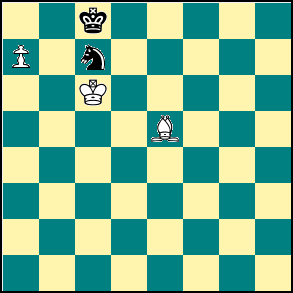 Now, in order to win, White must promote the a-pawn. Black will try to prevent this by checking with the knight to prevent White from getting to b6 or a6 while the bishop controls c7. In the previous solution, we saw that that required a check from b4 when the White king is on a6. So, all we need to do is place the bishop so it controls both c7 and b4.