Mistrust is the most necessary characteristic of the chessplayer.

—Siegbert Tarrasch, quoted in The Inner Game of Chess: How to Calculate and Win, by Andrew Soltis, revised edition, p. 261.

Attendance in the Winter Tuesday Night Marathon is nearing the all-time Mechanics’ Institute Chess Club record, with 116 entrants to date. The only larger event held at the M.I. was the 1974 Stamer Memorial with 119 participants, won by many-time Oregon state champion Clark Harmon a point ahead of the field. Two participants in the Winter TNM, Thomas Maser and Peter Grey, also competed in the 1974 event.

Four rounds remain in the USCF/FIDE rated competition and entries are still being accepted.

Young American players did well in Tata Steel (formerly Wijk aan Zee), which finished a few days ago. 21-year-old Wesley So tied for second in the top group with 8½ from 13, half a point behind winner Magnus Carlsen. Wesley’s 2854 performance raised his FIDE rating to number seven in the world at 2787½ and makes him the highest-rated American player, just ahead of Hikaru Nakamura who is number 10 at 2776. Now if we can only get Fabiano Caruana to return to representing the United States!

The second section of Tata Steel saw current Samford Fellow 23-year-old Sam Shankland score an undefeated 9 from 13 to finish third. Sam might even have done better if he had converted some superior positions that ended in draws. His 2696-FIDE result raises his rating to number 86 at 2661.

14-year-old newly-minted Grandmaster Samuel Sevian, a member of the 2011 and 2012 MI US Chess League teams, started slowly in the second group, with one draw and two losses, but finished strongly to score 7½/13, for a 2622 performance.

Grandmaster Sam Shankland, currently rated #86 in the world at 2661 FIDE, gave a well-received lecture before round four of the Tuesday Night Marathon. The 23-year-old GM from Orinda showed several of his games from the second group at Tata Steel, where he finished a strong third in the 14-player section. Among those listening to Sam’s lecture were former U.S. Champions Nick de Firmian and Patrick Wolff and International Master Yian Liou, who was presented his check for $2502 as the 2015 Neil Falconer Award winner earlier in the evening. The Falconer Award is given annually to the highest-rated junior under 18 in Northern California.

The next Mechanics’ Institute Chess Club guest lecturer will be Wesley So, currently rated number seven in the world, on Tuesday, February 10, from 5:15 to 6:15 pm. All are welcome to attend this free lecture.

The Wednesday Night Blitz restarted this week. It will be every Wednesday night (no interruptions) until mid-May, so circle your calendars to play Blitz on Wednesday night.

Last week we had nine players. The results were:

Also, mark your calendars: the Steve Brandwein Memorial Blitz tournament (he will be attending) will be held at Mechanics Institute on Saturday February 21, 2015. Prizes are $400-$250-$150-$100-$100, and every participant gets a free book prize.

going over
game positions
in my head
when i should be
asleep
& dreaming.

Here is an undated (though am guessing circa 1974-76) game, also without the location where it was played. It comes from a booklet produced by Martz that he used to teach a class in 1976.

Does anyone know what event the following game is from?

Hello, I am Marian Stere, a chess historian from Romania, member of the KWF&A (Ken Whyld Foundation & Association for the Bibliography and History of Chess) and member of the Board of the Romanian Chess Federation.

I invite you now to visit my site dedicated to the history of the chess game in Romania—www.stere.ro [select your language from the Google Translate list at the lower right—ed.]—which will soon reach its first year of publication. Here you can find a lot of information, events, biographies, photos, statistics about Romanian chess life.

The content of the site is permanently growing, because in this stage is posted only around 20% from the information gathered till now. You can also access a lot of chess materials from our site: books, regulations, archival materials, magazines, periodicals, tournament bulletins and many others, cumulating over 35,000 pages from Romanian (and not only!) chess publications.

A catalogue from a San Francisco book store in the donation given to the Mechanics’ last fall by Leighton Allen lists the following item:

The appellants on Wells’ behalf include some of the most prominent professionals in the state, Black and White. The pamphlet includes a one-page letter from Henry Gross, at that time one of the strongest chessplayers in the state, who had played with Wells.

This week we have a pair of studies. A chess study is a composed problem, usually an endgame, in which there are unexpected and artistic lines of play.

The first is a classic study by Richard Réti, published in 1921. Which color do you prefer? 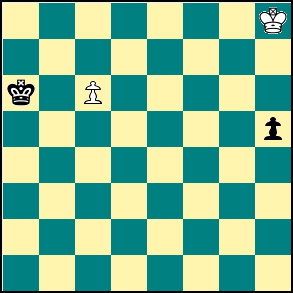 At first glance, White is doomed. He cannot catch the black pawn, but Black can easily capture his. Perhaps he should try offering a draw; you never know.

Not wanting to give up his only pawn by 1 c7, White looks left and moves

Black is not fooled by White’s apparent dash for the queenside. He has the winner, and he’s going for it.

The centralized White king now threatens to catch the Black pawn by 4 Kf4, or to promote his own with 4 Kd6.

So no matter which color you chose, you were right! Or wrong, depending on how you look at it.

The second, by the same composer, appeared in 1931. 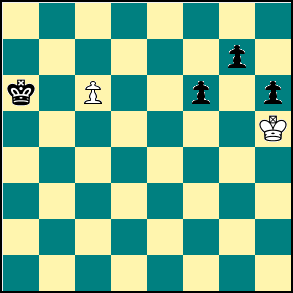 What’s going on? White’s going in the wrong direction.

Now Black has a choice: promote, and then White promotes also, which will be a draw; or try to stop White from promoting first.

Maybe getting the f-pawn out of the way so White doesn’t get it for free while heading for the center? Let’s see:

is also a draw; Black can’t promote his remaining pawn.