Half the variations which are calculated in a tournament game turn out to be completely superfluous. Unfortunately, no one knows in advance which half.

—Jan Timman, quoted in The Inner Game of Chess: How to Calculate and Win,
by Andrew Soltis, revised edition, p. 175

This coming Tuesday, world top-ten player Wesley So will give a free lecture from 5:15–6:15 pm. All are welcome.

The two leaders, who have 4½ from 5 (each has taken a half-point bye), are trailed by a large group with four points, headed by FIDE Master Paul Whitehead. Three rounds remain to be played.

Grandmaster Daniel Naroditsky is having a tremendous tournament at the Gibraltar Open and, with two rounds left to be played, has an undefeated score 6½ from 8, good for a tie for second. Initially seeded 26th at 2622 FIDE, Daniel has a performance rating of 2758, bringing him up to 2636.

Results from the January 28 Wednesday Night Blitz, by Jules Jelinek

Also, mark your calendars for the Steve Brandwein Memorial Blitz Tournament (he will be attending).

A chance to pay tribute to an old friend (Steve will be attending!)

Don’t miss this chance to play and watch some of the Bay Area's best players!

Every participant will win a book prize (Quality Chess, Everyman, New In Chess, etc). Many of the books are worth more than the cost of the entry fee.

The Mechanics’ Institute Chess Club has held two traditional weekend events, the Stamer and the Capps, for over forty years. The former is named for the Mechanics’ first chess director Arthur Stamer and the second after the chess master and science-fiction writer Carroll Capps.

Here is some information about Capps.

Back in the thirties, forties and fifties, Carroll Capps was one of the masters who dominated the club and Northern California Chess.

Carroll was born in 1914 in San Francisco. He attended U.C. Berkeley, where he lost an eye playing football. Undeterred, he joined the Navy and became a photographer in the Pacific theater of World War II. After the war he made a career as a paint chemist. In the 1960s he retired to write science fiction. Sci-fi buffs may remember C.C. MacApp, the pseudonym of Carroll Capps, as the author of many short stories and a couple of novels.

But Carroll Capps was more than a mere chess master, he was a good friend to all who knew him. He was a raconteur par excellence, who sort of “held court” at the club. It was his popularity, rather than his achievements as a master, that resulted in the tournament named in his honor, which has been held 43 years.

The following excerpt is taken from Aagaard’s Quality Chess Blog at http://www.qualitychess.co.uk/blog/?p=2855:

John (Shaw) and I agreed our way to ten books and I have put them in order of quality, as I see it. It is certainly up for debate. Below I will give books that fell just outside the list.

One of the rules of the list is that the same writer cannot be repeated. Another rule is that the books should be relevant today.

Eduardo Bauzá Mercere and Andy Ansel have succeeded in bringing this forgotten event back to life. All games were required to start 1.c4 e5, which might partly explain Marshall’s poor score.

Edwin Dimock of New London, Connecticut, sponsored a series of thematic tournament throughout the 1920s at the Marshall Chess Club.

This was a leisurely-played tournament. It started in May, but then was delayed when Marshall participated at Bradley Beach in June and traveled to Europe to play at Carlsbad. The tournament ended in November. Perkins withdrew, “his business took him to Chicago”.

The following four game scores are courtesy of Andy Ansel and taken from Reinfeld’s notebooks.

Bay Area youth have a national scholastic tournament coming up soon in their own back yard.

Go to http://susanpolgar.blogspot.com/2015/01/spf-national-open-for-boys-and-girls-in_26.html for more information.

In the game Sherwood–Uzzaman, the following position arose: 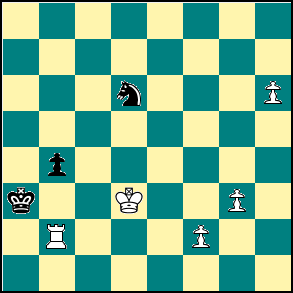 In the game, White played 57 Kc2, but suppose White had instead played 57 Rxb4 Kxb4, to give this position: 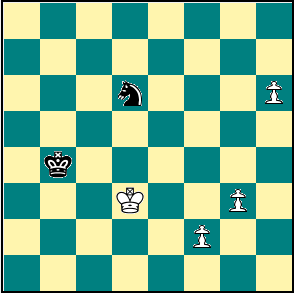 Is this still a win for White, or can Black draw?

First, the black knight has difficulty stopping a rook pawn, because if the white king attacks g6, the knight cannot survive. For any other file, the knight has two squares accessible from the promotion square (e g, Ne8 can go to d6 or f6).

Second, there is a trick involved in promoting connected g- and h-pawns when the enemy king can get to h8, because White must be careful not to stalemate Black.

The most straightforward plan is for White to get his pawns on f5, g6 and h7, and play f5 so the knight has no move. Then g7 will win. Black will try to get his king over to help. 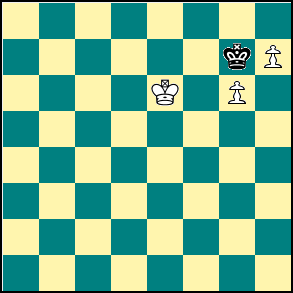 If, in the initial position, the black king had been one square closer to the kingside (say, on c5 instead of b4), the position would be a draw, because Black will capture the h-pawn with his king.