Preparing for a game with Larsen is a matter which is either too complicated, or too simple. The Dane’s repertoire contains practically all opening systems, and one’s chances of guessing the variation are no better than in a lottery. Therefore at home it was decided to begin the game with the advance of the king’s pawn. At that the preparation came to an end…

Andy Lee moved into clear first in the Winter Tuesday Night Marathon by defeating fellow FIDE Master Paul Whitehead in round six. The victory not only left Lee a half-point ahead of the field with two rounds to go, it also unofficially put his USCF rating over 2400 USCF for the first time in his career.

Tied for second in the record-setting 120-player field, a half-point behind Lee’s 5½ from 6 score, are International Master Elliott Winslow and National Masters Tenzing Shaw and Uyanga Byambaa.

International Master Ricardo De Guzman won the 15th annual Henry Gross Memorial held February 7 with a score of 4½ from 5. Tying for second in the 45-player field were National Masters Ian Schoch (lost to De Guzman in round 4) and Jerome Sun, plus Experts Rochelle Ballantyne (round 4 win over Sun) and Jason Childress (round five draw with De Guzman).

Erika Malykin, rated 1511 going in, had a spectacular event, scoring 3½ from 5, including wins over two Class A players and a draw with an Expert. Her only loss was to Schoch in the last round, and she ended the event at 1657.

Congratulations to Mechanics’ Institute Grandmasters Sam Shankland and Daniel Naroditsky, who will be part of the U.S. squad playing in the 2015 World Team Championship in Armenia this April.

This will be an especially busy and challenging month for the two, as they will also be competing in the U.S. Closed Chess Championship from March 31 to April 13 in St. Louis. This promises to be an especially strong event this year, with world top-ten players Hikaru Nakamura and Wesley So competing, as well as defending champion Gata Kamsky.

Last week (February 4) the results were

Also, remember, the Steve Brandwein Memorial Blitz Tournament (he will be attending) is only 1½ weeks away. It will be held at Mechanics’ Institute on Saturday, February 21. Prizes are $400-$250-$150-$100-$100, and every participant gets a free book prize.

Thanks to Vega Capital Management Limited for sponsoring the Mechanics’ Sunday Class for Girls and Women this February and March. The free class is held from 11:00 am to 1:00 pm each Sunday and taught by Ewelina Krubnik.

the director announces
the pairings are up
and everyone rushes
to the bulletin board
and crowds around
to see who they’re playing
and where they’ll be sitting.
peeling away,
you rush off to your board
to wait for your opponent,
either that, or find
he’s setting the clock
getting ready to start.
on your mark, get set,
"start your clocks!"
and the race begins.

Editor—FIDE requires who want to switch their allegiance from one federation to another potentially have three charges they have to pay. The first fee is a modest 250 Euro to FIDE for processing the transfer. The second is potential compensation to the player’s existing federation.

This can be huge, if the player is over 2700 and doesn’t want to wait two years to be eligible to play. The old federation can demand as much as 50,000 Euro (for a + 2700 player) in compensation or ask for nothing.

The only way out of the final potential charge is to sit out two years of official FIDE competitions (Olympiads, World Cup, etc.). Failing that it is pay-to-expedite-play for the new federation.

I counted 56 fees for 2013, with no fees listed for one of the players, with the following fees:

500 Euros=34 total, mostly lower players who never competed for their former country in an Olympiad.

Scottish chess journalist John Henderson, long based in Seattle but now back in his native Glasgow, has written a very interesting blog on kibitzing, that venerable pastime that has been profoundly altered by the rise of the silicon oracle. It can be found at http://jbhthescots.com/2014/11/10/the-death-of-kibitzing.

This is a famous study by Fernando Saavedra, based on a position by Barbier, and published in 1895. As with all studies, you should play it out to be absolutely sure you have the solution. 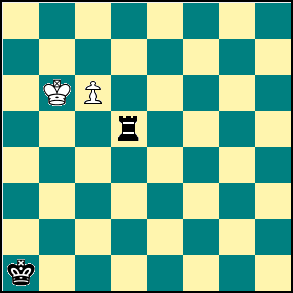 What is the result from best play?

White wins, but he must find some tricky moves.

The only winning move, because if 2 Kd7 Rd7, followed by capturing the pawn, draws, and 2 Kc5 Rd1, and subsequent ...Rc1 will trade the rook for the pawn or queen from promotion. Any other king move allows ...Rc6.

Black is out of checks, so 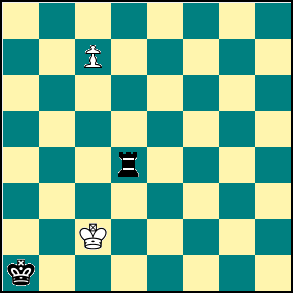 Saavedra’s contribution was White’s next move:

Rook vs rook, a draw, right? But wait: White threatens Ra8 mate, so Black must defend with

wins the rook because of the threat of Rc1 mate.

As a practical matter, Black would have had a better chance if he had let White promote, forcing him to win with queen vs rook. For example, 3...Kb2 4 c8=Q Rd4+ 5 Kb5 Kb3.