Chess is a scientific game and its literature ought to be placed on the basis of the strictest truthfulness, which is the foundation of all scientific research.

The winner of the Winter Tuesday Night Marathon is very much undecided with one round remaining. FIDE Master Andy Lee looked to be the favorite before round seven with a half-point lead, but he had to take a zero-point bye, opening the door for International Master Elliott Winslow and National Master Tenzing Shaw. They both won, and now share the top spot, with six points from seven games, a half-point ahead of Lee and Oleg Shaknazarov. FIDE Master Paul Whitehead heads a large group on five points.

The Steve Brandwein Memorial Blitz Tournament (he will be attending) will be held at Mechanics’ Institute on Saturday, February 21. Prizes are $400-$250-$150-$100-$100, and every participant gets a free book prize.

Last week there were nine players for the Wednesday Night Blitz, and the top finishers were

The following article was published at US Chess Live with photos. It can be found at http://www.uschess.org/content/view/12957/798/.

Grandmaster Wesley So, currently rated number seven in the world, gave a well-received lecture to an audience of approximately 80 players at the Mechanics’ Institute Chess Club of San Francisco on February 10. Among those in the audience were USCF President Ruth Haring and Grandmasters Sam Shankland, Daniel Naroditsky and Nick de Firmian.

The topic of Wesley’s talk was his games with Black from the Tata Steel in which he faced 1.e4 and answered 1...e5. These included his victory over Vassily Ivanchuk and draw with Fabiano Caruana.

Following the lecture Grandmaster So took questions from the audience. Here are his answers to two of them.

Q: Do you believe the time control should be speeded up because well-prepared players today often blitz out the first 15-20 moves?

A: No. It’s true that sometimes your preparation appears on the board deep into the game (see for example Ding Liren - So, Tata Steel 2015), but that is not always the case. There is so much to remember these days that it can be difficult to recall the exact move order in a given variation. Just a slightly different sequence can make for big differences. Also you may face an opponent that just wants to play chess and opens 1.g3 or 1.b3 in which case you may need all your time.

Q: Can you give general advice how to improve?

A: Play over the games of the World Champion Magnus Carlsen. You can learn much from them. He has no real weaknesses. Imagine what it was like for Anand to play two matches with him!

So, who is the latest in a long list of top chess players who have lectured at the Mechanics’, including all World Champions from Lasker to Karpov, except Botvinnik, made a very favorable impression on members of the nation’s oldest chess club (founded in 1854) who liked his down-to-earth manner and sense of humor. American is lucky that it has such fine ambassadors for the game in its two world-top-ten players Hikaru Nakamura and Wesley So.

America’s oldest Grandmaster, Elmars Zemgalis, died on December 8 in Seattle at the age of 91.

The Latvian-born Zemgalis first gained the attention of the chess world by his second place finishes at Augsburg and Regensburg in 1946, but it was his tie for first with world championship contender Efim Bogoljubow at Oldenburg 1949 that really made him known. There he finished above such players as Unzicker, Rossolimo, Smisch, O’Kelly, Wade, Tautvaisas, Rellstab and Enevoldsen, scoring an undefeated 12 from 17. These results and other strong performances in Germany from 1946 to 1950 led to his receiving the Grandmaster title from FIDE in 2003.

Seattle Post-Intelligencer sports writer Royal Brougham had the foresight to include a chess master in his program to bring displaced sportsmen from Europe to Washington State. This made it possible for Elmars and his wife Cacilia to move from Germany and settle in Seattle in the spring of 1952. Their arrival was immediately celebrated with two special events. The first saw Elmars play 50 players simultaneously at the P.I. auditorium with hundreds of spectators watching. The second was a match against the leading Washington chess master, Olaf Ulvestad, who had competed in the 1946 USA–USSR match. Elmars won convincingly, 3–1. He would later win the Washington State Championship in 1953 and 1959, but his days as a chess professional had passed.

By transposition Black has arrived at one of the main positions of the Semi-Slav, which was a great favorite of Chigorin. He was the first to appreciate the solidity of Black’s position and that White’s threat of d5 wasn’t so terrible. That it could simply be ignored and when White exchanged on c6 Black could recapture with the b-pawn, willingly taking the isolated c-pawn in exchange for the control of d5 and possible use of the d4 square.

Modern-day theory holds this variation to be somewhat better for White, in part due to his superior center influence and also because Black must often concede the bishop pair to solve the problem of how to develop his queenside pieces.

Natural and seemingly consistent with the plan of holding e5; however after this move Black will have difficulty bringing out his queenside pieces without having to give up the center with ...exd4. The most popular moves here are 11...Rd8 and 11...Nb6 - planning ...Bg4. Anand was successful with 11...exd4 on two separate occasions.

It’s easy to criticize this move giving up the center, but it is likely Black’s best try here. White can meet 13...b6, intending to complete development with ...Bb7 and ....Rad8, with 14.d5!, as Black can no longer answer dxc6 with ...bxc6 to maintain control of d5.

16...Nfd5 17.Nc5 Rd8 had to be played. Now White builds up a powerful attack that Black is powerless to stop.

Johannes Zukertort’s visit to the Mechanics’ Institute Chess Club in 1884 was the first by a world-class player. The following material adds to what has been previously published in M.I. Newsletters 34, 156, 610 and 620.

J. Fennimore Webb, who conducted Zukertort reception; collected $304.50, received $50 from exhibition, paid Zukertort $354.50, including $250 salary and the rest for expenses.

Other simuls are planned for Wednesday, Friday and Saturday (July 19th), which will close his San Francisco engagement. He plans to go on to China. Zukertort’s visit led to considerable discussion on the strength of local players which may lead to tournament to decide supremacy.

Editor – we believe Zuckertort extended his stay to July 25th.

Here is an opposite-colored bishop position, taken from an actual game, not a study. 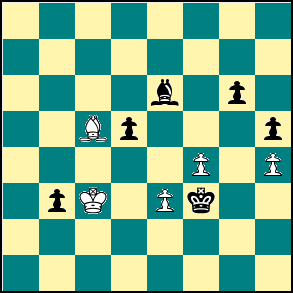 For the moment, Black is up a pawn. Can he convert it to victory, or does White have chances of his own?

The game is Kotov–Botvinnik (yes, that Kotov, and that Botvinnik), Moscow 1955.

Here is the game text, with notations therein by Botvinnik:

Black will win White’s bishop with either the b- or h-pawn, whichever White doesn’t blockade with his king, and promote the other. For example, 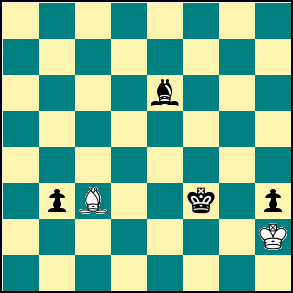 Here Black will win White’s bishop on b2.