Carlsen is a psychologist. He understands a secret of chess—that sometimes, however well you play and calculate, if a freak, brilliant tactic ruins your position, you’re dead. So he’s always in control—he’ll first prevent your counterplay, and then go about improving his position. Of course, when he’s pushed against the wall, particularly with Black, he can just as easily enter unexpected complications, but no more than he needs to. He doesn’t try to play the best move in the position, but the best move against the opponent. At the same time, he does whatever needs to be done—never getting hung up on the emotional aspects of the position such as its aesthetics, or how the position was two moves back.

International Master Elliott Winslow’s performance at the Winter Tuesday Night Marathon showed that at 62 years old he still possesses plenty of “chesstosterone”. His win over Oleg Shakhnazarov in round eight of the event gave him clear first with a score of 7–1, good for $750. Elliott’s wins over national masters Tenzing Shaw, Uyanga Byambaa and Josiah Stearman pushed his rating back over 2300 USCF.

Shaw was second with 6½ points, good for $500, while Byambaa, FIDE Master Andy Lee, Natalya Tsodikova and Igor Traub tied for third at 6–2.

From round 8 of the Winter Tuesday Night Marathon:

It’s safe to say almost all blitz chess today is played online, but that didn’t stop the Stephen Brandwein Memorial Blitz from attracting 76 chess players to the Mechanics’ Institute Chess Club of San Francisco on March 21. Among those participating were six Grandmasters and six International Masters, making this one of the stronger and larger stand-alone (not connected with another event like a US or National Open) blitz tournaments ever held outside New York City.

The winner of the six double-round Swiss (opponents played each other as both Black and White), played at a time control of 4 minutes a side plus two-second increment, was 2014 Tromso Olympiad gold medal winner Sam Shankland, who scored 10½ from 12. He took home $400 for his efforts.

The success of the event was made possible by the generous donation of $500 to the prize fund by former MI Chess Director Jim Eade, honoring Stephen Brandwein. Steve, rated in the top 50 players in the United States in the mid-1960s and a USCF 2600-strength blitz player in his prime, was in attendance. Jim’s gift kept the entry fee at a very affordable $10 for the four-hour event, which offered book prizes to all participants, but no class prizes.

A crosstable of the event can be found at http://chessclub.org/archive.php?y=2015&t=club-events&e=x03.Brandwein1Standings

Photos of the event can be found on the homepage of Chessdryad at http://www.chessdryad.com/

The Mechanics’ Institute Chess Club, the nation’s oldest, founded in 1854, will host the 9th Annual Ray Schutt Memorial Blitz on May 3rd. Go to http://www.chessclub.org for more information.

While looking for the Grefe–Martz game from the Mechanics’ Institute Chess Room Newsletter for 30 January 2015, I came across a couple of games Max Euwe played in a Simul on 25 July 1976 from the Fremont Argus.

The following game was played by correspondence between the chess organizations of Harvard and the University of California. The East and West broke even in a match of two games and as many years.

This is one of the most famous studies of all time, composed by Richard Réti, with contributions from Arthur Mandler and Henri Rinck. It looks simple, but is diabolically clever. Try to work it through completely before looking at the solution. 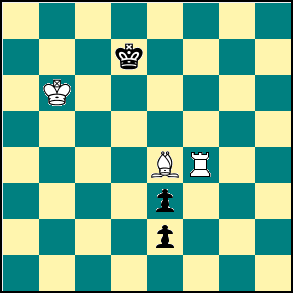 You probably started with the obvious plan of getting rid of the black pawns, followed by an easy mate, so let’s see how that goes: 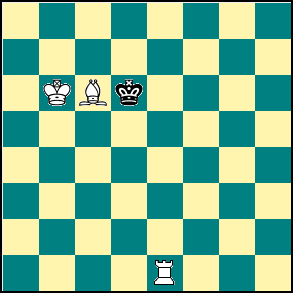 But we can modify this plan, so the bishop leaves d5 open, avoiding the above stalemate: 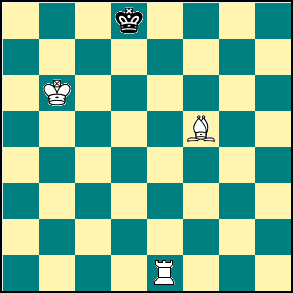 That darn bishop messed things up again, so let’s just get rid of it:

If Black takes the bait:

Of course, Black isn’t going to fall for this, so he plays

And now White has the amazing move 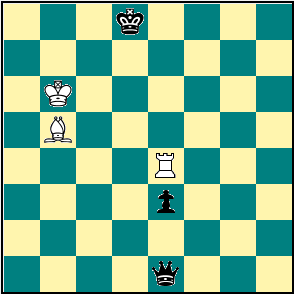 Black’s only check is the useless Qa5, and no other way of stopping