I sometimes get nervous before a game, but once play starts I’m completely relaxed.

The 15th Max Wilkerson G/45 is this Saturday

The 87-player Spring Tuesday Night Marathon includes International Master Elliott Winslow, who won the Winter TNM. It is still possible to enter the event with a half-point bye for the first round.

From round 1 of the Spring Tuesday Night Marathon:

Congratulations to 19-year-old Daniel Naroditsky, who reached 2640 FIDE by scoring an undefeated 7½ from 10 in the recently-concluded Reykjavik Open. His score, which tied for 4th in the powerful Open, was good for a 2663 FIDE rating performance and a seven-point rating gain.

On Saturday March 28th at 1 pm, there will be a blitz tournament at the Discovery Bay Community Center, 1601 Discovery Bay Boulevard, Discovery Bay, CA 94505. Entry fee will be $25 and prizes (based on 12 participants) will be $100/$50 for 1st/2nd respectively. Those interested please contact Ana Hatarik ([email protected]).

Expert Jason Childress won the 40-player A.J. Fink Amateur (below 2200) held March 7 and 8, with a score of 5½ from 6. Risith Susarla was second with 5 points. Renate Otterbach, who won the top under-1200 prize, was the big rating point winner, gaining 153 points.

2) A Memorable Life: A Glimpse into the Complex Mind of Bobby Fischer explores the brilliant career of one of the greatest American chess players of all time.

Newly-donated artifacts from the collection of the World Chess Hall of Fame and never-before-exhibited materials from the Fischer Library of Dr. Jeanne and Rex Sinquefield highlight some of the chess champion’s most significant accomplishments.

You do not need to be a chess player to understand the impact that Bobby Fischer had on the game of chess. Born Robert James Fischer on March 9, 1943, he received a $1.00 chess set from his sister Joan when he was six, and his love of the game quickly blossomed. Already showing a proclivity for puzzles and advanced analytical thinking, a young Bobby began what his mother Regina referred to as an obsession for the game. Little did she know that this passion would eventually lead to her son becoming the World Chess Champion, ending 24 years of Soviet domination of the game in 1972 and changing the way the entire world would view chess.

A Memorable Life: A Glimpse into the Complex Mind of Bobby Fischer presents a few key moments in the storied life of a man who was both a source of intense admiration and controversy. Beginning with his rise to fame as a young boy, this exhibition includes material related to his early training with teachers Carmine Nigro and Jack Collins, many of the major tournaments in which he participated, as well as his historic World Chess Championship victory, and his later retirement from tournament play. Through artifacts generously loaned from the Fischer Library of Dr. Jeanne and Rex Sinquefield, we are given unprecedented access to Fischer’s preparatory material for the 1972 world championship run, as well as the initial versions of his classic text My 60 Memorable Games. Never before exhibited, these materials supplement highlights from the collection of the World Chess Hall of Fame, donated by the family of Jacqueline Piatigorsky, which include photographs, correspondence, and other artifacts related to his 1961 match against Samuel Reshevsky. These remarkable artifacts illuminate Fischer’s brilliance, showing how he revolutionized American chess.

Historic front page articles featuring coverage of Bobby Fischer’s landmark World Chess Championship victory have been provided to the World Chess Hall of Fame through the generous support of Historic Newspapers LTD. The company supplied valuable research support and discounted issues of newspapers from both the United States and the United Kingdom, including back issues of The Guardian, The New York Times, and The Daily Express. For more information about the company, please visit http://www.historic-newspapers.co.uk/

Bay Area chess players will once again be treated to an outstanding event featuring great Soviet players of the past. The field will consist of the following players with the country they now represent in parenthesis.

Spectators are welcome to watch this event, organized by Sam Palatnik and directed by Eduard Dukhovny, free of charge.

The following excerpt is from an interview which appears at http://en.chessbase.com/post/viktor-korchnoi-interview-true-to-himself.

V. Korchnoi: My opinion about the current World Champion is not that high.

E. Surov: Well, then let’s talk about Kasparov and Karpov. Who do you appreciate more as a chess player?

V. Korchnoi: Kasparov’s chess is much better than Karpov’s.

G. Sosonko: Better even than Fischer’s?

V. Korchnoi:  (smiling, with a characteristic smooth hand gesture) Fischer... Fischer is in a class by himself.

79-year-old Viktors Pupols, who played in the 1954 Washington State Championship, finished last in this tournament, but had many tough games. The 60-year span between events (he has played over 35 total) has to be some sort of record. The Washington Chess Federation has held an annual round robin since 1932(!) to determine its state champion. For more information go to http://www.nwchess.com/articles/history/WA_chess_champions.htm.

Thanks to Andy Ansel for sending along the following game.

This move and the following are considered the refutation of Black’s supposedly premature ...e5. However Blacks moves 13 and 14 cast some doubt on the soundness of White’s play against the Black pawn on e5.

Gligoric and Sokolov only got this far and comment “in White’s favor”.

Kavalek thought for an hour on this move and tries to divert some of the pressure on e5.. However this move creates a new weakness and commits White to a very inferior position.

After this move Black is lost. I should have played:

This position is from a 1996 Grandmaster game. 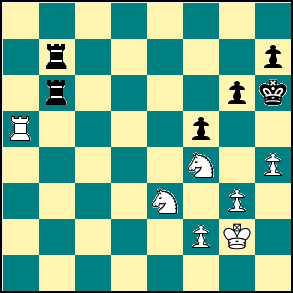 White has two knights for a rook; can he convert this advantage, or does Black have some unexpected resource?

After the shock had worn off, GM Zurab Azmaiparashvili tried 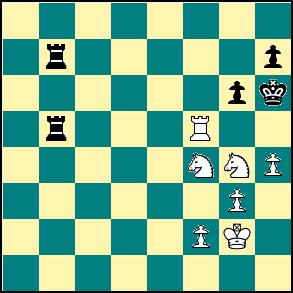 Black resigned because after 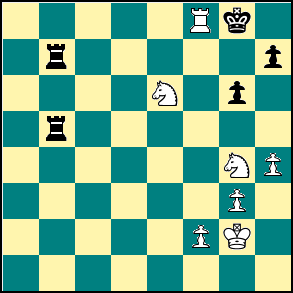 A better try would have been 46 ... Kg7, but White will move the rook, and Black is still lost.