In general, what a chess player needs has always been the same, with a love of chess the main requirement. Moreover, it has to be loved naturally, with passion, the way people love art, drawing and music. That passion possesses you and seeps into you. I still look at chess with the eyes of a child.

—Boris Spassky, in an interview with Anatoly Samokhvalov at chess24.com

International Master Elliott Winslow heads a group of 15 players with perfect scores after round two of the Spring Tuesday Night Marathon. The 8-round event, currently with 98 participants, is still open for entry with half-point byes for rounds one and two.

Mongolian Grandmaster Batchuluun Tsegmed won the 15th Max Wilkerson G/45 tournament held March 21 with a score of 4½ from 5. Jason Childress, Chinguun Bayaraa and Anthony Acosta tied for second at 4–1 in the 33-player field.

Results of the Wednesday Night Blitz for March 18

Also the Blitz on Saturday March 28 at 1 pm at Discovery Bay has been moved to a different location. It will be held at 29 Rudder Ct. in Discovery Bay. Entry fee has been lowered to $20 and prizes (based on 12 participants) will be $100/$50 for 1st/2nd respectively. Those interested please contact Ana Hatarik ([email protected]).

Congratulations to FIDE Master and International Arbiter Eric Schiller who celebrated his 60th birthday on March 20. Eric has contributed a tremendous amount to chess as an author, player, teacher, tournament director and organizer. He may be best remembered for the latter, particularly the World Student Team Championship he put at the University of Chicago in 1983 and the 1998 US Open in Kona, Hawai.

Mechanics’ members will be glad to hear that 11-year-old Hans Niemann, who made the MI his second home in 2013–2014, playing hundreds of games there, is continuing to improve in 2015 at his new residence—the Marshall Chess Club.

The following victory pushed Hans’ U.S.C.F. rating close to 2300. The notes to the game are very generously supplied by Grandmaster Alex Lenderman, who will represent the United States in the 2015 World Team Championship this April in Armenia.

19...Nf6 with equal chances is more accurate, although 19…Re8 basically won Hans the game.

This doesn’t work against perfect play, but props for being brave, and trusting your instincts.

Total hallucination. As soon as I touched his pawn on b7 I saw the writing on the wall. Moral of the story: Don’t play after a tough long day if you have a chance.

This was obviously missed by me.

Props for being brave and turning down the repetition despite being down to less than 5 minutes in a complicated-looking position against a higher-rated player.

And later Black won. Good for Hans! Not a perfect game of course, mostly due to its being rapid, but a lot of props to Hans for energetic and brave/confident play. I think Hans has all the chances in the world to go far in chess.

Irina Krush and Anna Zatonskih have dominated this tournament the past decade. One of the two has won every event going back to 2006, with Krush victorious the last three events. Five players make their debut this year (Paikidze, Sharevich, Virkud, Wang and Yu). The latter two are only 12 years old.

Live spectators may also take in the action in the upstairs tournament hall of the CCSCSL, which offers additional on-site GM-led commentary as well as food catering included with ticket purchase.

3) Boris Spassky on his 1992 match with Bobby Fischer

Weren’t you worried when you travelled to the 1992 match with Fischer in Yugoslavia? You’re a citizen of France, which supported sanctions against the Balkan state.

No, I wasn’t worried. I looked on that match as a celebration. Fischer had surfaced, there was no burden of responsibility and the prize fund was good. I could secure myself a pension and I had the enormous pleasure of inviting my Soviet friends Nikitin and Balashov to be my seconds.

Did France try to persuade you not to go?

France, like the USA, got involved itself from the legal point of view during the Yugoslav crisis. The point was that a great number of French businessmen sold weapons during the war in Yugoslavia, which wasn’t permitted. When the question of paying taxes arose I ended up having to find the best lawyer in the country, someone who dealt specifically with such issues.

The Chess Club and Scholastic Center of Saint Louis has done the chess world a favor by conducting a literature review to answer the question, “Does chess provide educational benefits?”

Here is a study composed by Sergey Mikhailovich Kaminer in 1927. Black is ahead in material, but can he win? As is typical of studies, things aren’t as simple as they seem. 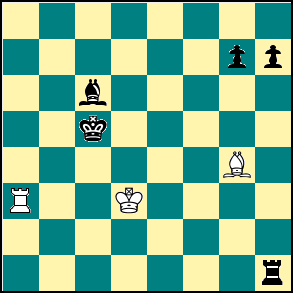 Taking advantage of the black bishop and rook lying on the same diagonal, White fires first with 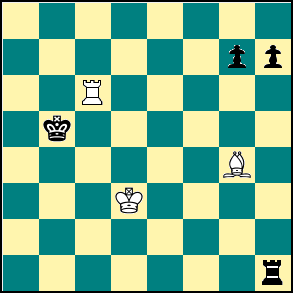 Now capturing the rook draws because of Bf3+, followed by Bxh1. Instead, Black goes after the white bishop.

The rook is defended, but Black attacks the defender: 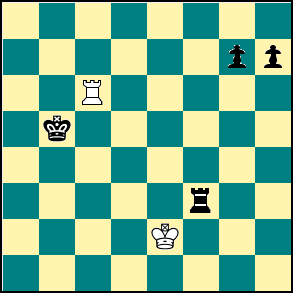 Each side is attacking the other’s rook, so it looks as if White is lost, whether or not he trades rooks. So,