How do world champions and top GMs keep physically fit for grueling matches that last several months? What kind of sports or exercises are they active in?

Bobby Fischer swam and played tennis. I vividly recall [his] telling me how glad he was to see that Efim Geller had developed a paunch before their game at Mallorca in 1970, where Fischer as Black declined a draw on move 7 and went on to swindle a win in 72 moves from a simple rook and pawn ending after Geller missed a draw on move 71!

The Newsletter will take a break for the next four weeks, as the editor will be in Reno, St. Louis and Armenia. It will resume May 8.

The 2015 San Francisco Scholastic Championship, sponsored by Robert W. Baird & Co and the Mechanics’ Institute was held last Saturday in Golden Gate Park and was a great success. The 65-player top section ended in a three-way tie for first at 4–0 among Jayson Shi, Callaghan McCarty-Snead and Aaron Thompson, with Shi taking the title in a playoff.

Baird is an employee-owned, international wealth management, capital markets, private equity and asset management firm with offices in the United States, Europe and Asia. Established in 1919, Baird has more than 3,100 associates serving the needs of individual, corporate, institutional and municipal clients. Baird has more than $135billion in client assets. Committed to being a great place to work, Baird ranked No. 9 on FORTUNE’s 100 Best Companies to Work For in 2014 – its 11th consecutive year on the list. Baird’s principal operating subsidiaries are Robert W. Baird & Co. in the United States and Robert W. Baird Group Ltd. in Europe. Baird also has an operating subsidiary in Asia supporting Baird’s investment banking and private equity operations. For more information, please visit Baird’s Web site at rwbaird.com.

The results for March 31:

Be sure to mark May 3 on your calendar. That is when the 9th Annual Ray Schutt Blitz will be held at the Mechanics’ Institute. Signup that day will be 12–12:45 pm, with the games getting under way around 1 pm.The prizes will be $400-$250-$150-$100-$100. Entry fee is $10 (free for GM, IM, WGM, WIM) with book prizes for all participants. The Schutt family will be providing beverages and light refreshments.

Six-time U.S. Champion Walter Browne will be among the participants in the Larry Evans Memorial in Reno this weekend. He will be offering autographed copies of his best games collection The Stress of Chess on Sunday from 11 am–1 pm. Walter also has a half-dozen DGT clocks available for $40 each. You can contact him at his website at http://www.finessebybrowne.com/

Grandmaster James Tarjan, now living in Portland, has long ties to the Mechanics’ Institute Chess Club. Its members have enjoyed seeing him come back from a thirty-year break from tournament play and write about his experiences (see the January issue of Chess Life).

Jim’s second international event since coming back was this past January in Gibraltar. Here he shares a funny story from it:

“In Gibraltar there played a man from Mongolia named Badrakh Galmandakh. He showed up with a FIDE rating of 2240. I didn't realize it during the tournament, but I see now that he played not only in the Masters but also in both of the five-round Challengers. So for ten days, in the morning he played in a Challengers round, and then the Masters in the afternoon.

“Already in the first round of the Masters, he blew his cover. He was White against GM Motylev (2665). The game began 1.d3 d5 2.e4 dxe4 3.dxe4 Qxd1+ 4.Kxd1. One can almost hear Motylev thinking to himself, just what kind of patzer do I have here? Motylev was steadily outplayed and finally resigned on move 77.

“In one Challengers game, against his countryman Ravdanlkhumbuu Amgalanbaatar, Badrakh opened with 1.e4. The game ended in a draw. In the last round of the Challengers, GM Juan Bellon played 1.b3, and Badrakh responded 1. ...b6. Bellon won. Despite losing in the last round, Badrakh made an IM norm with 4½ points against 4 GMs, 5 IMs and one other. He scored four and a half out of five in both of the Challengers. At the end of the ten days he had a 2328 FIDE rating, having gained 88 points, 6.6 of them for his draw against me.”

With long-running chess columns dropping like flies these days (The New York Times for one) it is heartening to hear stories like the following one from long-time Mechanics’ friend John Henderson, who writes:

Firstly, many thanks for your support after The Scotsman opted to recently drop my chess column. The good news is that First Move, the forward-thinking Bellevue-based education foundation in Washington that puts chess into classrooms across America, will now be sponsoring the column from today. We will start the partnership by initially running the column three-times a week—please show your support for First Move by following the column at http://www.1stmove.org/2015/03/10/the-marshall-plan/

Each time a new column is published, you will be sent a link directly to it. Please pass the link on to the wider chess community.

Many thanks to First Move!

I am asking for help from you and the other members of the international chess historians group.

In his book I Cannot Forgive Rudolph Vrba describes his escape from Auschwitz in early April, 1944 with Alfred Wetzler. After escaping they hid in a large clump of bushes “Fred lectured me amiably on the finer points of chess until we fell asleep. He was an expert. The champion of Auschwitz, in fact; and I am glad to say that he retired, unbeaten.”

I am interested in finding out whether Alfred Wetzler played in tournaments or had a rating, either before the war or afterward. He and Vrba were Slovakian Jews who had been incarcerated since 1942, so most likely they both were in their twenties.

After their escape they wrote a very detailed report dated April 25, 1944 in Zilina, Slovakia. It was immediately translated into German and Hungarian and soon into English. This was the first detailed account of what was happening at Auschwitz and the imminent planned murder of one million Hungarian Jews. Their report eventually reached the Pope, Churchill, and Roosevelt, and pressure from the Allies finally forced the Hungarian President to stop the deportations in early July, 1944, saving the lives of 600,000 persons (e.g., the Allies threatened to bomb Budapest). Some of the more than 400,000 persons deported and murdered from May 15 to early July might have been saved also, were it not for Kastner’s apparent deal with Eichmann. Kastner was the head of Hungarian Jewry and in late April had been given a Hungarian translation of the report so he could warn everyone. However he apparently suppressed the Vrba/Wetzler report in exchange for Eichmann’s arranging the transport of 2000 Hungarian Jews to safety (Kastner’s family and friends as well as other big shots). Kastner was assassinated in Tel Aviv in 1958.

Jeremy Silman offered his and his friends selections earlier this year in an article posted at http://www.chess.com/article/view/the-best-chess-books-ever. It has already attracted close to 60,000 views!

I won’t put my 32 selections in any order, except to note that I favor books I learned from as a youth. I also have minimized tournament book selections (if not the list would be huge).

Here is a corrected crosstable replacing the one published in MI Newsletter #698.

Go to http://kenilworthian.blogspot.com/2014/05/the-dimock-theme-tournaments-and.html to find out more about the Dimock thematic opening tournaments.

Since this is the last issue of the newsletter for four weeks, we have two different positions. 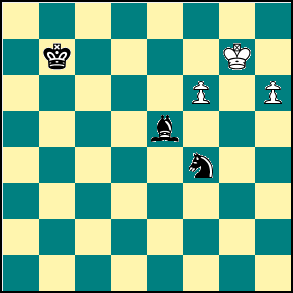 This position is from Holland–Flear, Uppingham 1987; it appears in GM Glenn Flear’s book Practical Endgame Play—Beyond the Basics: The Definitive Guide To The Endgames That Really Matter.

This is the only winning move. 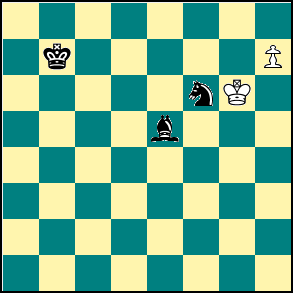 After this, White cannot defend the pawn; the bishop and knight together block f7, g7 and g8, while the bishop controls the promotion square. Black brings his king over to captures the h-pawn. 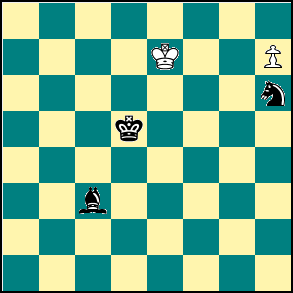 and the finish could be

You do know how to mate with a bishop and knight, right? 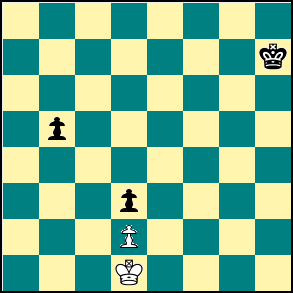 White’s back is literally and figuratively against the wall. Can he save himself? The solution to this one will be in the next Newsletter.