The 52nd Arthur Stamer Memorial will be held this Saturday and Sunday at the Mechanics’.

International Master Elliott Winslow heads a group of 11 players who have perfect scores after two rounds of the Summer Tuesday Night Marathon. It’s still possible to enter the eight-round event, which currently has 95 players, with half-point byes for rounds one and two.

Grandmaster Sam Shankland will be playing in the Edmonton International from June 20-28. Among those participating besides Sam are Vassily Ivanchuk, Wang Hao and Indian Grandmasters Pentala Harikrishna and Surya Shekhar Ganguly.

14-year-old Jeffrey Xiong made his third and final Grandmaster norm in winning the Chicago Open over Memorial Day Weekend. Foster City Grandmaster Daniel Naroditsky was among those tied for second. Daniel will play in the Benasque Open (Spain), the Politiken Cup (Denmark) and the Riga Open (Latvia) this summer.

This game is an example of how to checkmate with only two knights ... when the opponent has an extra pawn. It is a fairly rare endgame where this happens. This is truly an exceptional endgame by young 11-year-old Hans. 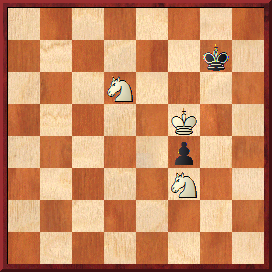 There is only one move that draws in this position... can you find it?

The draw is secured by Kh7. After Kh6 there is a mate in 10, but who can calculate a mate in 10, aside from Houdini and super strong GMs? Will the 11-year old Hans be able to find it? 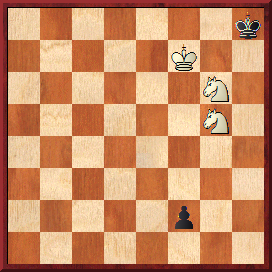 Six-time U.S. Champion Walter Browne and International Master Elliott Winslow tied for first in the Boris Siff Senior Championship, held May 29–31 in Berkeley. The two winners, who drew in round three, scored 3½ from 4 and split $600. Michael Walder, who lost only to Browne, was third with three points.

The tournament, which was open to players 55 and over, was directed by Kerry Lawless for the Berkeley Chess School. Organizer Elizabeth Shaughnessy hopes to make this an annual event.

Grand Master Sam Shankland will teach a special morning class for adults and juniors rated 1800–2200 in Berkeley the week of June 29th. There will be four classes, starting Tuesday June 30 and running through Friday, July 3rd. 10:00 am to 12:00 noon each day.

Cost is $160 for the class and it will be located at the site of the Berkeley Chess School's summer camp, 1581 Le Roy Avenue, in Berkeley Please contact Marc Newman at 510-843-0150 or [email protected] if you have any questions or are interested in registering

3) Anand on the effect of computers in chess

You can find the article in its entirety at http://en.chessbase.com/post/bringing-chess-into-the-spotlight-2.

Kunal: Anand, how much has the emergence of computers and all these information being available to you constantly all the time, changed your sport over the last 20-25 years?

Anand: It’s night and day. Computers have brought this forward so much. For instance when I was growing up in order to acquire the experience people used to say: well, he needs about seven or eight years of experience and then he’s ready to challenge for this or to try for that. Now, you think six months, because computers collect all the information, they present it to you instantly, and if you have any doubts you don’t need to discuss it with another strong player – you can just ask the computer, because quite often the computer itself will give you the answer. In the event you need to talk to another player, you do it online – on Skype or with a phone, whereas there are years I remember where I had to write down stuff I wanted to ask someone and then wait for the next time we happened to be in the same city together. The way you can consult and ask questions and clarify your thoughts has changed so much that people get much stronger much younger.

When I became a grandmaster at the age of eighteen, I was the youngest grandmaster in the world. Now I would have to be eleven to be the youngest grandmaster in the world. So that age is descending fast, and in fact chess is getting much, much younger, and one of the reasons is because of computers. The other thing computers have done is to level the geographic playing field. Once upon a time if you wanted to become a good chess player, it was ideal to be born in Russia. If you couldn’t be born in Russia, if you had to be born in India, then Chennai was a good bet, and so on. Now it doesn’t matter. You can be in some island in the Pacific – it’ll still hurt, the lack of contact, because you won’t make the initial friend and you won’t interact, but a big part of the gap has disappeared, which is why the top ten now is filled with players from countries which never had a top ten player for the last hundred years. You can see how computers are changing the game.

The 1978 event was scheduled for the normal dates, the second week of November, but canceled at the last minute. A tournament was held in July of 1979 and another was advertised in Chess Voice to be held in November of that year. All indications are that it was held. We have been unable to find results for this event and ask for assistance.

This seminar will take place immediately before the Las Vegas International Chess Festival. The cost is $125 until 5/25, and $150 after that date. The lecturer will be IA Carol Jarecki. For more information and registration, please visit http://www.vegaschessfestival.com/2015/01/fide-arbiters-seminar-added-to-festival/

The Arbiters Seminar is required for individuals interested in pursuing the title of FIDE Arbiter. Upon the conclusion of the seminar there will be a written examination which participants must successfully pass with a score of 80%. Topics of discussion include the FIDE Laws of Chess, tournament rules, tie-break systems, pairing procedures, title and rating regulations, anti-cheating, and electronic clocks.

This is a classic study. Can Black win this one? 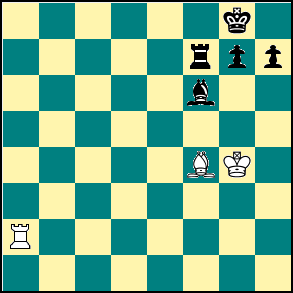 The idea is that a bishop and rook pawn cannot win unless the bishop is the same color as the promotion square (h1, which is light). Since Black has only a dark-squared bishop, if he has a single rook pawn, the position will be drawn. But the same is also true if he has two, three, or more rook pawns on the same file.

Then why not avoid losing the g-pawn by playing 3 ... g6? You figure that one out.