Q: Do you think computers have spoiled things a bit?

A: They’ve changed things enormously, but spoiled? That I wouldn’t really say. Certainly the chess world is completely different now because of computers, and one really negative consequence has been the possibility of cheating in chess. You know, people can go into the bathroom and analyze the position on their pocket phone, so steps have to be taken to try to prevent that kind of thing, but otherwise, it’s just a change. And in a way it helps because, for example, people can watch games on the internet now from tournaments all over the world live, and with the computer backing them up, they can have an evaluation of the position so they know what’s going on. It’s like having a continuous commentary, expert commentary, on the game. So from the point of view of chess publicity, and the general chess public, computers have in fact helped quite a lot.

From round 4 of the Summer Tuesday Night Marathon:

International Master Yian Liou of Alamo will be playing in the U.S. Junior Closed at the Chess Club and Scholastic Center of Saint Louis from July 7–16. This event will probably be arguably the strongest ever in the series dating back to the 1960s. Players will be competing for over $20,000 in prizes and a spot in the 2016 U.S. Championship.

Pal Benko was not the only Hungarian player to make his way to the United States after the Hungarian Revolution in 1956. Master Lajos Szedlacsek (1910-1964) moved to Cleveland and had a short-lived but major impact on Ohio chess in the late 1950s. Tibor Weinberger’s influence on Southern California chess has been considerably longer lasting.

Weinberger did not immediately settle in the Southland. His first two years in the United States he won events in Minnesota, Nebraska and New Jersey before making Los Angeles his permanent home. His arrival was soon felt as he won the California Open and Closed Championships plus several smaller events in 1959. The next few years he was the dominant player in California before being supplanted by International Masters William Addison and Anthony Saidy, who both played on U.S. Olympiad teams in the 1960s.

Weinberger continued to have many successes, and his rating went over 2400, earning him a spot in the 1968 U.S. Championship. Earlier that year he had arguably the greatest success of his career at the National Open, held in Stateline on the Nevada-California border next to Lake Tahoe. There Weinberger shared second place with William Lombardy, behind Pal Benko with a 7–1 score. His performance included wins over Grandmaster Larry Evans and 1967 World Junior Champion Julio Kaplan, and a draw with Benko.

Weinberger, now age 82, is currently the second highest rated player in the United States over 80. He scored 3–3 in the open section of the National Open last year, with wins over National Masters Anjelina Belakovskaya and Alisa Melekhina. Tibor will be back in Las Vegas this weekend to play in the National Open once more.

One of the most important figures in Bay Area chess prior to World War II was chess master and noted problemist A.J. Fink, who was a fixture at the Mechanics’ for several decades. The following article gives an idea of the esteem in which he was held by his peers. Thank to John Blackstone for tracking this done.

A.J. Fink, a truly great American chess problem composer and also a strong chess player comes from San Francisco. He took up chess by way of mental occupation in the days which followed the great earthquake in that city in 1906 and it was not long before he became distinguished equally as player and problemist.

When the international Good Companion Club was founded his interest received a new impetus. He contributed about 60 problems to its tourneys, winning numerous prizes and giving special pleasure to the solvers all over the world by the ingenuity of his key-moves and the spontaneity of his cleverly-pointed themes.

When the World War reached the United States in 1917 Fink was among the first to enlist. After the Armistice he returned to San Francisco, where he has held a government position ever since. His productivity as a problem composer is now unfortunately reduced, though from time to time solvers are gratified to meet one of his more recent works. It might be added that to this day he has a standing appointment to play chess over the board at the club on Saturday nights.

The September-October 1944, v. 41, issue 5 of the American Chess Bulletin, on unnumbered page 97, starts with the headline “Membership Campaign of U. S. Chess Federation”.

“Half a dozen clubs, the executives of which recognize how vitally important it is to the advance of the cause of chess for all the organizations devoted to the game, to work together toward a common goal, have become charter members of the United States Chess Federation in accordance with the general program printed in the American Chess Bulletin. The list includes the Washington Chess Divan, Austin Chess Club and Checker Club of Chicago, Ventnor City Chess Club, Grand Rapids Chess Club, Syracuse Chess Club and Houston Morphy Chess.

This is a good start, but hardly representative of the 1708 individual members on the Federation roster, according to last accounts. The State of California, with 536, leads all the rest; mainly due, we understand, to the personal efforts of Herman Steiner of Los Angeles.”

A subsequent list gives the U.S.C.F. having 536 members, 16 affiliated clubs and 1,708 associations. Does any Newsletter reader know precisely what the latter were? The U.S.C.F.’s membership figures have it crossing the 1700 member level only in 1954.

The California Open State Championship has been won by Herman Steiner with a score of 17–0. Steiner is well-known in New York chess circles and has frequently competed in national chess events. Now that Arthur Dake, who has gained lasting fame for his win from World Champion Alekhine in the 1932 Pasadena tournament, is in retirement, a family man helping Seattle’s (should be Portland—Ed) war effort, Steiner is the Coast’s undisputed champion.

In this study, the position is almost symmetric; Black just lacks a bishop on f8. 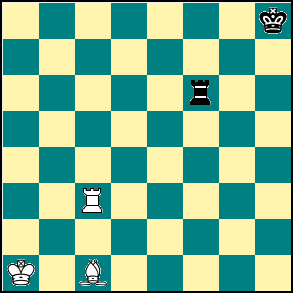 There are some tricky lines, so be sure to work this one to the end. 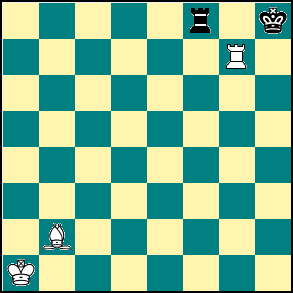 This study was created by the Italian endgame composer Rinaldo Bianchetti in 1925.