I think Lasker’s main strength, and what distinguished him from the other players of his generation, was his excellent psychology. He knew precisely which moves would discomfort his opponent, and without taking excessive risks he would cause situations to arise on the board in which his opponents were likely to make a mistake. This doesn’t necessarily mean that he was making deliberately bad moves, but he knew how to induce mistakes.

A memorial for Alan Benson will be held this Sunday, June 28, from 1 to 4 pm at the Mechanics’ Institute. Light refreshments will be served. All are welcome to attend.

The Tony Lama Birthday Blitz, honoring the long-time Mechanics’ guard (25 years!), will be held July 12 at the Mechanics’. Go to http://www.chessclub.org/calendar.php for more information.

Congratulations to Uyanga Byambaa of Oakland, who tied for first with a score of 4–1 in the U.S. Women’s Open Chess Tournament, held in Las Vegas last weekend. USCF President Ruth Haring of Chico finished with 3 points.

Senior Master Cameron Wheeler tied for fifth in the US Game in 10 Minutes tournament held in Las Vegas in conjunction with the National Open. The event, which was quite strong, was won by Ilya Nyzhnik, ahead of fellow Grandmasters Gata Kamsky and Alexey Dreev.

The winners of the main event, held June 19–21, were Grandmaster Alexey Dreev, Gata Kamsky, Ilya Nyzhnyk and Axel Bachman at 5–1. Top Bay Area scorers were International Master Kesav Viswanadha and National Master Vignesh Panchantham. The two teenagers each scored 4½ points, with Kesav beating International Master Aldama and losing only to Dreev, while Vignesh beat Grandmaster Rohde and was only defeated by Kamsky. Mechanics’ Grandmaster-in-Residence Nick de Firmian had a strong performance, scoring an undefeated 4–2, including draws with Grandmasters Kamsky, Rohde and Alex Lenderman.

This Intermediate Tournament Director was originally an over-the-board USCF Master (1971), ICCF Master (1975), and simultaneous blindfold chess expert (up to 10 boards). He personified Berkeley tournament chess during the post-Fischer era.

He was also the Director of the East Asia Book & Game Center Chess Club during Fischer’s reign and the Director of the UC Berkeley Campus Chess Club (under the auspices of SUPERB Productions) from 1976 to 1981. He was Games Bulletin Editor of the Lone Pine tournaments from 1976 to 1979. He was Chess Editor of several East Bay newspaper chess columns: the Berkeley Gazette and the Daily Californian. He started as treasurer of the Professional Chess Association (PCA) and eventually became its president. He was also the Promotions Coordinator for ProChess from 1979-1980. More recently (2004) he worked for Games of Berkeley and ordered the chess books for them.

Edward Winter’s Chess Notes , the number-one site in the world for chess history, has come through again with an amazing find—a forgotten Fischer simul in Colorado Springs. http://www.chesshistory.com/winter/ number 9219 has information on a previously-unknown simul Bobby Fischer gave in Colorado Springs, Colorado.

Here is the only draw Bobby gave up. I have added light notes to the game (John Donaldson).

This variation of the Philidor has been played for over a hundred years, but it was the Soviet Grandmaster Antoshin who made it respectable in the 1960s. Today many Grandmasters use it, including Mamedyarov and Bu. Black has rich strategical play with ...d5, .c5 and ...b5 breaks, plus pressuring the e4 pawn.

This move is a serious mistake as it loses control of f5. Black had to play 9...Kf8.

Congratulations to Erik Karklins (father of Andrew) of Chicago who recently celebrated his 100th and continues to play Expert-level chess.

The following game is from the 1945 California State Championship.

I enjoyed this classic video on YouTube - https://youtu.be/aPjie2S3tQI . Some good games—the Great Dane Bent Larsen and the last half hour my old friend GM Julian Hodgson, albeit in a much younger version. I also was amused by the crude computer graphics in this 1990–91 video. Notice in the first games how slowly the pieces move. But this was state-of-the-art in 1990.

Leonard Barden and George Koltanowski are two names that come immediately to mind when thinking of long-running chess columns. Frederick Chevalier is another. His column in the Christian Science Monitor ran from October 1929 to Apr 8, 1980.

The World Chess Hall of Fame opened an exhibit entitled Battle on the Board: Chess during World War II on June 25. It will run until January 17, 2016.

Though chess is often perceived as a game of war, it also serves as a means of passing long hours or as an aid in recuperation for members of the military. Battle on the Board: Chess During World War II provides insight into how a game modeled upon battle can provide a sense of home and community as well as demonstrating the dramatic changes the war brought to the game. The exhibition includes prisoner of war chess sets from the collections of the National Museum of the Marine Corps and National Museum of the United States Air Force, archival material from the John G. White Chess Collection at the Cleveland Public Library, and highlights from the collection of the World Chess Hall of Fame.

Go to http://www.worldchesshof.org/exhibitions/exhibit/battle-on-the-board-chess-during-wwii/ for more information. 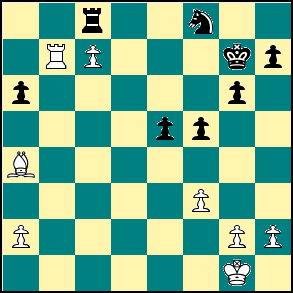 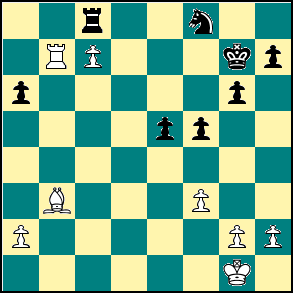 What can Black (Hector Rossetto) do?

So Black can only move his pawns, and after 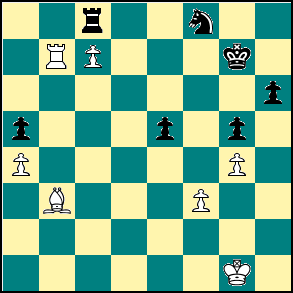 “Zugzwang! Black has run right out of satisfactory pawn moves.” (Fischer), so 1–0