Every World Champion is a reflection of his times. He is the stock market generation—all bottom line, no ideology.

—Garry Kasparov, speaking about Vladimir Kramnik, shortly after losing his title.
From an article by Dylan Loeb McClain, published in
the New York Times, November 18, 2000, page A3.

From round 3 of the Leighton Allen Tuesday Night Marathon:

The Mechanics’ entry in the United States Chess League starts its eleventh season on August 26 against the defending champions, the St. Louis Bishops. Our team is lead by Grandmasters Daniel Naroditsky and Vinay Bhat, who, aided by a strong supporting cast, hope to maintain the team’s record of success (eight playoff appearances, and a championship in 2006).

We reproduced a quote about Walter Browne by long-time MICC supporter Chris Mavraedis in MI Newsletter #711, which was republished in the latest issue of New in Chess (issue 5 of 2015).

The memorial for Walter Browne on Saturday August 15, attracted around 60 attendees, who came to pay their respects to the late six-time U.S. chess champion. Among those present were his widow Raquel and siblings Susan and Roger. The latter came from the East Coast specially for the event.

Among those speaking were International Master Elliott Winslow and National Master Dennis Fritzinger, who shared their memories of Walter. Interestingly the two had very similar first impressions of the future Grandmaster Browne.

Fritzinger, then rated an Expert, remembers being drafted at the 1966 Seattle U.S. Open, along with four Masters, to play in an unusual speed-chess simul. The event, played at a time control of five minutes apiece, had Walter playing all five players simultaneously. Dennis recalls the event was something to see, as the 17-year-old Walter was racing back and forth, battling both five strong opponents and the clock. He scored 80 percent both times he tried this in Seattle.

The following year at the Atlanta U.S. Open, the 15-year-old Elliott Winslow was amazed to see a fellow teenager pulling off the same feat—it was Walter once again. Fellow MICC member Peter Grey also recalls Browne talking on all comers, in groups of five, for stakes in Atlanta, until future IM Norman Weinstein took one of the boards, to which Walter shook his head no. The teenage Walter had superhuman energy and confidence in his abilities, but even he knew when enough was enough.

The Mechanics’ Institute Chess Club would like to give a big thanks to Renate Otterbach and Will Clipson for helping to make this memorial possible.

2) Randy Bauer and Anjelina Belakovskaija elected to Executive Board

The United States Chess Federation announced on August 9 that Randy Bauer and Anjelina Belakovskaia were elected to at-large positions on the U.S. Chess Executive Board, for terms of three years each. A total of 1252 ballots were returned and validated.

Belakovskaija, who lives in Tucson, Arizona, is a three-time U.S. Women’s Champion and holds the Women’s Grandmaster title. Bauer, a 2300-rated master, is one of the strongest players in the history of Iowa.

Chess Evolution, a highly-respected weekly publication http://www.chess-newsletter.com/, produced by Arkadij Naiditsch and Csaba Balogh with support from fellow Grandmasters Etienne Bacrot and Kamil Miton, recently featured two games of Daniel Naroditsky from the Politiken Cup held a few weeks ago. The annotator, French 2700-rated Etienne Bacrot, notes that Daniel is currently the tenth-rated player in the world under 21.

Here is one of the games, with abridged notes.

4...Nge7 is the usual move in the Rossolimo.

If he doesn’t play this, Black will simply have a bad version of the Hedgehog.

Normal play for development. The slow move also would have given an advantage:

Let’s have a look at other defensive tries:

The d4 knight should be defended!

12...Qc7 13.Rxc3 Qd8 was a more solid option, but it is understandable that Black takes material in a bad position.

Provoking more weaknesses on the kingside.

Black cannot survive with all his pieces on the last rank.

As of August 16 the United States currently has seven players rated in the top one hundred players in the world.

Newsletter reader Richard Reich of Madison, Wisconsin, passes along the following previously unpublished game, which he recorded as it was played.

Black offered a draw: “I think I have the best of it, but I’ll offer a draw.”

After some garbling of the score, we have the correct position.

Casey Bush, the biographer of Arthur Dake (Grandmaster from Oregon) has written a piece on Dake for the Oregon magazine 1859 Magazine, entitled “King Arthur”; it can be found at https://www.1859oregonmagazine.com/2013-january-february-1859-magazine-chess-master-arthur-dake .

National Master John Blackstone of Las Vegas passes along the following game which was published in E.H. Bryant’s column in the Sunday Oregonian on November 6, 1921, and almost certainly elsewhere. Why? Because White was 7-year-old Celia Neimark of Youngstown, Ohio, and Black the reigning Ohio champion Irving Spero (1892-1955). According to Bryant, Neimark had supposedly only been playing nine months when this game was played, and Spero greatly underestimated her.

You can learn more about the short-lived career of Neimark at http://www.chess.com/blog/batgirl/girl-prodigy.

The following position occurred in a 1978 game. What is best play for each side? 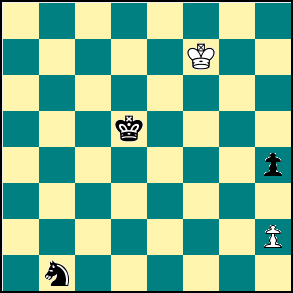 This position came about in an interesting way. Starting from 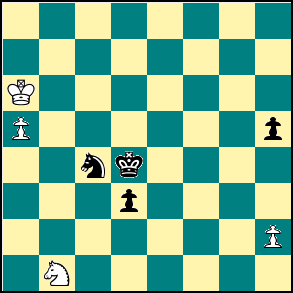 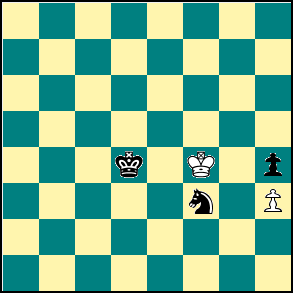 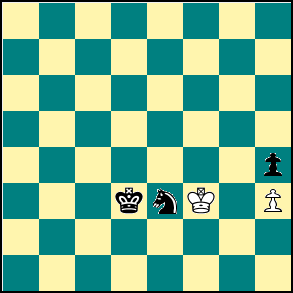 Black to move–the same position as after move 19 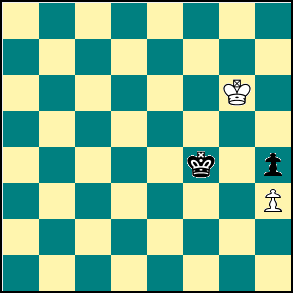 The position and analysis are from Mikhail Shereshevsky’s classic Endgame Strategy, p 27, “The Problem of Exchanging” (referring to the queen exchange following move 10).