Any attempt to emulate the engines and their 2,000,000 moves a second is doomed to fail. We need to supplement calculation with all other weapons available. And one of these is intuition, which is strongly rooted in pattern recognition. When you have “uploaded” a lot of chess patterns to your brain in your childhood, you will often have a very strong suspicion regarding what the right move is in a position, even though you have no idea why.

From round 5 of the Leighton Allen Tuesday Night Marathon:

San Francisco won its second-round match in the US Chess League, beating San Diego 2½–1½ on September 2.

The Mechanics’ are tied for first in their division.

Jules Jelinek, Weekly Wednesday Night Blitz Coordinator, writes that the series, which starts every Wednesday at 6:30 pm, is back in action.

2) Walter Browne annotates two of his last games – Part One

Walter Browne played in tournaments right up until his death. His last event was the 2015 National Open, but just before that he played two Bay Area events in late May, tying for first in the Berkeley Senior Championship with International Master Elliott Winslow, and sharing third in the Best of The West in Santa Clara. Here is the first of two games played by Walter from these events, with his notes. Note they were done Chess Informant style and some words have been added to make it easier to follow the games.

The first game sees Walter employ one of his old favorites, the Classical Variation (Nf3, Nc3 and Be2) against the Pirc Defense. When Walter made his international debut in the late 1960s he was a committed 1.e4 player, but even when he made the switch to 1.d4 he still liked to play this variation when he got the chance—after 1.d4 d6 and 1.d4 g6 he would play 2.e4.

10...Nxe5 11.Nxe5 dxe5 12.Bc4 Rd8 13.Qf3 Nh5 14.Ne2 Re8 15.Rfd1 leaves White with a slight but persistent pull. Walter won many games in this structure where his minor pieces are more active than their counterparts, particularly the dark-squared bishops.

This move, heading into a superior endgame, is typical in such positions, but even stronger was 16.Qe2!, when Black must be extremely careful, as White now has serious threats against f7. If the White queen arrives on c4 with check Nc3-b5 (exploiting the unprotected queen on c7) followed by Nd6 can be very powerful as Black’s queenside pieces are bottled up.

White takes time out to safeguard his h-pawn, keeping moves like a4-a5 and Nd2 (intending to come to c4 later) in reserve.

The knight begins preparations to come to c4, but 22.a5!? was an attractive alternative.

Thanks to First Move chess columnist John Henderson for bringing to our attention a great video on the USSR-USA radio match, which celebrated its 70th anniversary on September 2. Go to https://www.youtube.com/watch?v=L-6jfnGKUAE to see the match from the Soviet perspective. You can find a recent column by John at http://www.1stmove.org/2015/09/01/trash-tolkien/.

National Master John Blackstone of Las Vegas passes along the following win by Capablanca (16 at the time) in a friendly game played against Joseph Redding, one of the best California players of the late 1800s and early 1990s and son of Benjamin, for whom the town in Northern California is named.

Just read Chris Impey’s Beyond: Our Future In Space (New York, Norton, 2015), in which the nuclear engineer Robert Zubrin, an advocate on the human exploration of Mars, apparently developed a type of “three-person chess.” See page 166.

Mark Anthony Wilson wrote Frank Lloyd Wright On The West Coast (Layton, Utah, Gibbs Smith, 2014. On page 106 in the library of the Hanna House (Honeycomb House) completed in 1937 in Stanford there’s an impressive chess set shown. Paul Hanna was a professor at Stanford. The budget was $15,000.

Writing in response to the piece on chess and celebrities in Newsletter #717, Mike Schemm of Seattle shares his memories of the 1972 American Open:

I am sure you remember me saying I sat next to Joni Mitchell, but did not remember her. I do remember Bobby Fischer. He took a circle of the room. I was at the end of a row at the edge of the room. He stopped and spent perhaps 5 or 10 seconds looking at my game. A small thing, but I will never forget. I had a worse position in a gambit opening I had played, but I won the game. I don’t remember them being the same tournament, but my memory is not great, so it certainly could have been the same tournament. I do remember the sound was like a beehive when Fischer walked in. He took a tour of the room and left.

He was only there for a few minutes.

This was indeed the 1972 American Open, which might have been Fischer’s last public appearance. The event was played November 23–26, while San Antonio 1972, the scene of another Fischer sighting, ran November 19 to December 11. We are not sure if Fischer was in San Antonio before or after the American Open.

The report in Chess Life & Review on the 1972 American (published in the February 1973 issue, pages 71–73) includes a photo of Fischer signing an autograph, and the actor Peter Falk talking with Senior Master Dennis Waterman, one of the strongest players to grow up in Oregon. Falk was gathering information for his performance in the Columbo episode “The Most Dangerous Match”, which aired March 4, 1973. The plot revolves around a chess player who murders his opponent before a big match and Columbo’s attempts to discover how he did it. Chess was very much in the public eye in the early 1970s.

It’s good to know how to play rook-and-pawn endings. For instance, what should be the result of this one? 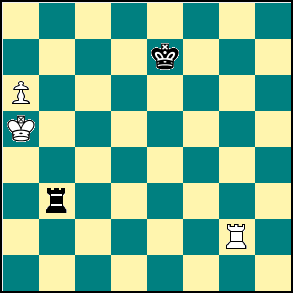 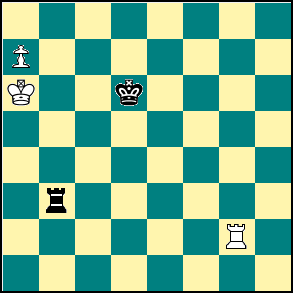 Black to move (analysis, after 4 Ka6) 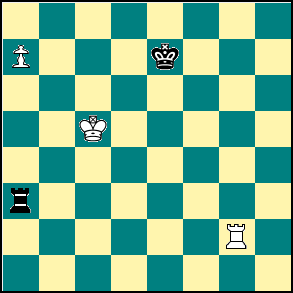 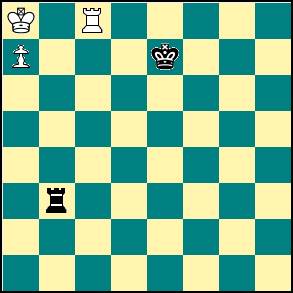 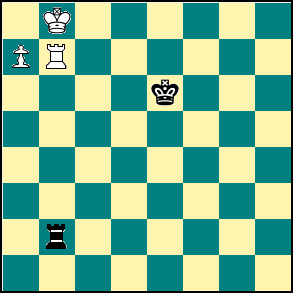 This position, from Fischer–Benko, USA ch 1959-60, is analyzed in John Nunn’s Secrets of Rook Endings (Gambit 1999), a book well worth studying.