With all due respect, he is not a young man. He is the oldest player in the Grand Prix and he is 46. He was a World Champion in his forties, while the competition is much younger, I think that tells a lot about his chess ability, his strength. Even with his composure, and his ability to deflect the tension, it’s tough, it’s very tough. He’s competing with young boys who are twenty or more years younger than he is, and there are also all the expectations… it’s tough. We have to give him credit, but 46 is a tough age.

—Garry Kasparov, taking about Viswanathan Anand
during the 2015 Sinquefield Cup.

National Uyanga Byambaa is a full point ahead of the field at 6½ from 7 (first-round bye) in the Leighton Allen Tuesday Night Marathon. International Master Elliott Winslow (who beat top-seeded James Critelli—2376 USCF—in round 7) and Expert Natalya Tsodikova are tied for second at 5½. Two rounds remain for the 99-player field.

From round 7 of the Leighton Allen Tuesday Night Marathon:

The Mechanics’ lost to Las Vegas 3–1 in round 4 of the US Chess League, with the only point scored by Grandmaster Vinay Bhat on board one with Black. The games were much closer than the final score indicates.

Sam Shankland had an excellent run in the FIDE World Cup, beating Grandmaster Ivan Popov (2662 FIDE) in round one 1½–½ and losing to Hikaru Nakamura in round two only in a rapid-chess playoff, after going 1–1 in classical games.

Jules Jelinek runs the Wednesday Night Blitz each week at the Mechanics’. Signup starts at 6:30 p.m. and round one begins at 6:40. Late entries are accepted. It will be every Wednesday night (no interruptions) from here on out until Thanksgiving.

National Master Uyanga Byambaa took first place in the Alan Benson Memorial, held August 7 to September 11 at the Berkeley Chess Club. Her score of 5½ from 6, which included wins over International Master Elliott Winslow and National Master Roger Poehlmann, earned her $200. International Master Winslow was second with 4½. Elizabeth Shaughnessy organized and Kerry Lawless directed the 30-player event. The La Vieve Hines Marathon, named after the first women champion of California, starts September 18. Details for the event can be found at http://www.berkeleychessschool.org/programs/adult-chess-tournaments/.

The late Charles Powell won a record seven Virginia State Championship titles between 1964 and 1976 and was a member of the Washington Plumbers that won the US Chess League in 1976. In the late 1970s Charles moved to San Francisco and played in many events at the Mechanics’ Institute, including several Northern California State Championships. He died in 1991 at the age of only 46 and every May the Mechanics’ holds a tournament to remember him.

National Master Erik Osbun pays his respects to Senior Master Powell by annotating his victory over Bobby Fischer in a simul during Fischer’s 1964 tour. Osbun, who played Fischer that same year in a clock simul, also shares his memories of Bobby.

Fischer is known for his unstable performances against the Winawer French, so Powell adopts it. The evidence is booked in How To Beat Bobby Fischer, by Edmar Mednis.

An unusual variation pioneered by William Hook of the Virgin Islands.

A new theme emerges: you take my rook and I’ll take yours. I wonder how much of it Charlie had calculated?

Powell rejects the perpetual check to be had by 11…Qd3+. It looks as if he intends to castle.

What has transpired is the mutual capture of a piece, except that Black has the threat to take one more by 16…Qd3+. Thus, the white king flees.

Editor – The text may not be that bad (see note at the end of the game).

What has transpired is the mutual capture of a rook, except that White’s two remaining pieces are awkwardly employed. This factor decides for Black.

A not so simple game of “Double Take My Rooks!”

Additional commentary on the simultaneous exhibition, the theme, the characters, and chess professionalism:

The story of Fischer’s Richmond simultaneous exhibition is spread over three books: Legend On the Road, 1st and 2nd editions, by John Donaldson; and The Unknown Bobby Fischer by Donaldson and Tangborn. Our subject game was discovered too late for inclusion in any of these books.

Two queens capturing all four rooks is an unusual occurrence. The game might make a good addition to a second edition of Take My Rooks I, by Seirawan and Minev.

The late Charles Powell, with whom I was acquainted, contrived the victory over the U.S. Champion. Charlie was a lawyer often assigned to defend unsavory bad guys in court, which Charlie did not like. Chess must have afforded great relief from those stressful tasks.

The late Robert J. Fischer, World Chess Champion 1972–1975, met the U.S. chess public at many simultaneous exhibitions in 1964. I saw him in person only two times in my life, a day at the U.S. Junior in 1957 and taking a board at Davis on April 16, 1964. He was very popular. To the best of my knowledge he did not do anything like that after winning the world title. Instead, after an amusing skit with Bob Hope, he retreated to Garner Ted Armstrong’s religious establishment and its girls. Outside of any gratification that path may have provided, it became a financial disaster for Fischer.

In my opinion, he should have done a tour of simultaneous exhibitions across the U.S.A. in 1973. Greater popularity, higher fees, and continuing solvency would have been his just for the taking. It appears to me that he did not realize fully that he was a professional personality in the entertainment business. In that regard, the late Walter Browne was far more professional.

The September Top Ten Women’s list has Hou Yifan almost one hundred points ahead of her nearest competitor.

National Master John Blackstone of Las Vegas sends the following article on A.J. Fink, which appeared in the July 15, 1950, issue of the Christian Science Monitor.

A. J. Fink, whose problems have graced this column from time to time for many years, celebrates his 60th birthday July 19. A San Francisco resident, he first took up chess in the days following the earthquake of 1906. Except for service in World War I, his adult years have been spent in government service (Editor—Fink worked for the US Postal Service), and much of his free time has been devoted to problem composition and local competitions.

He won the California state title in 1922, 1928, 1945 and 1946, receiving 74 awards in problem contests. He is now conducting the problem section of Chess Digest, a California monthly issued by George Koltanowski.

You are invited to compete in The Friendship Games!

The Friendship Games is a norm-possible nine-round FIDE-rated chess tournament, October 28–November 1, organized by Michigan Chess Festival LLC. IA Hal Bond, a widely and richly experienced arbiter who served as Deputy Arbiter for the Anand–Kramnik World Championship Match in 2008, will be the Chief Arbiter.

Players already committed to compete in the Friendship Games include (partial list): GM Fidel Corrales, GM Roberto Mogranzini (Italy), IM Martha Fierro (Ecuador), WGM Lisandra Ordaz Valdez (Cuba). We expect additional Cuban players to compete, including members (note the plural) of the Cuban Olympic team. Also expected to compete are titled players from Canada, India, numerous titled players from the USA, and many other strong players. Updates on the players who have committed to compete can be found on the tourney website, www.michiganchessfestival.com , or interested persons may inquire at [email protected]. The Friendship Games builds on the success of prior Fall Festivals organized by MCFLLC.

The tourney is organized with an eye towards being a super-swiss under FIDE rules. Some conditions are available for GMs, and a few internationals who are not GMs. For details, and other questions, contact Alan Kaufman at [email protected].

Rook-and-pawn endgames are tricky, so we have simplified by giving White the rook and Black the pawns. What is the result of best play on both sides? 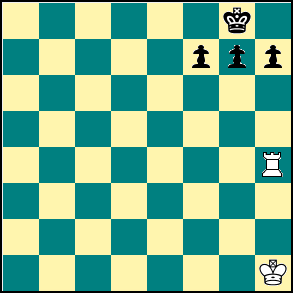 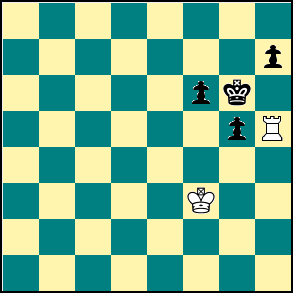 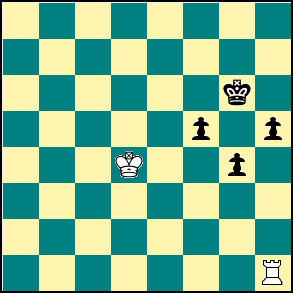 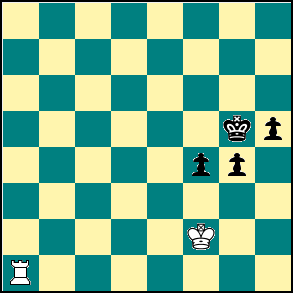 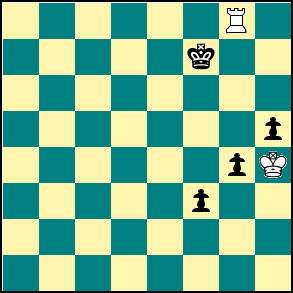 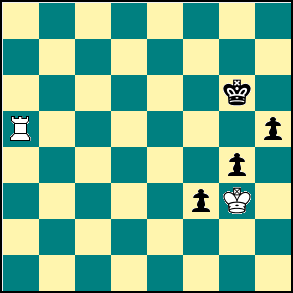 Black will just shuffle between g6 and h6.

This position comes from Oxford Companion to Chess, as an example of a basic endgame, rook vs three connected pawns.