Are you happy with the current World Championship selection cycle of players getting selected for the Candidates from different tournaments like the World Cup, FIDE Grand Prix etc. And then competing in a round robin Candidates tournament to determine the challenger culminating in a twelve-game World Championship match? If not, what would you change?

I think the current system of the Championship Cycle is more or less balanced. The Candidates tournament and the following match is fine. Qualification to the Candidates might be a bit better. In fact, I strongly dislike the wild cards which are distributed not according to some sportive criteria. (Ed: referring to the wild card into the Candidates, for a player who never qualified either by rating or result, while all other players need to earn their spot). Ideally they'd be removed. Also, it would be a nice idea to add some qualification tournament, for example for the players in the Top-100, to have a couple of spots to the Candidates from there. But I am afraid it is not going to happen anytime soon, as I foresee a reduction in the money flow into top chess - Russia and Azerbaijan are involved very heavily in conducting the majority of the top events, but with the present oil prices it is not likely to continue the same way.

The 15th Annual J.J. Dolan Memorial will be held this Saturday at the Mechanics’ Institute.

The Newsletter will take a two-week break with the end of the Leighton Allen Tuesday Night Marathon and resume with the beginning of the Fall TNM.

The last round of the Leighton Allen Tuesday Night Marathon was one of the wilder ones in the history of the 52-year-old series, with upsets galore, including games won by Sammy Greene and Erkhes Erdenebileg against opponents rated respectively 739 and 728 points higher.

International Master Elliott Winslow, who was a point out of first with two rounds to go, ended up taking first place all alone. His 7½–1½ score, which included a last-round win over Natalya Tsodikova, earned him $650. Tying for second at 7 were National Masters James Critelli and Uyanga Byambaa with Tsodikova and 80-year-old Peter Grey. The latter two split the prize for best Expert.

From round 9 of the Leighton Allen Tuesday Night Marathon:

The Mechanics’ entry in the U.S. Chess League, minus Grandmasters Daniel Naroditsky and Vinay Bhat, lost its third match in a row, for the first time in its 11-year history in the league, to Arizona 2½–1½. Cameron Wheeler, playing Grandmaster Rogelio Barcenilla on board one, nearly won to equalize the match after James Critelli won on board four and David Pruess and Andy Lee lost on boards two and three.

Jules Jelinek runs the Wednesday Night Blitz each week at the Mechanics’. Sign-up starts at 6:30 pm and round one begins at 6:40. Late entries are accepted. It will be every Wednesday night (no interruptions) from here on out until Thanksgiving.

Thanks to the efforts of Diane Lai and Kris Ashley placards with information on the 80 photos hanging on the walls of the main chess room and room 407 are now available for viewing.

Grandmaster Sam Shankland will be the special guest lecturer before the start of the Fall Tuesday Night Marathon on October 20. Sam’s talk, which runs from 5:15 to 6:15 pm, is free and open to all.

Walter Browne’s chess archives continue to bear fruit. Below are the four games of the first match between Walter and Jude Acers.

Walter writes in his book The Stress of Chess (page 26) about his adventures in the summer of 1967 (Walter was 18).

In August I took an all expenses paid trip to Atlanta to compete in the U.S. Open, courtesy of the USCF for coming second in the US Junior Closed. In a so-so performance I tied for fourth.

Afterwards I visited a friend in New Orleans and then got talked into hitching a ride ninety miles up to Baton Rouge, Louisiana, in the rain. On the way up my friend and I first got a ride from a trucker, quite likely a KKK member, who swore almost non-stop for a good thirty minutes, lamenting mostly of his hatred toward fellow human beings in the South. A few minutes later in the rain we get a ride from a black family that was so tranquil and low-key; it was a complete and highly appreciated change!

I stayed with my friend in what seemed like a mansion, a huge three-storey house in Baton Rouge. I met the infamous master and organizer/showman Jude Acers, who is an incredible character with boundless infectious energy. Jude and I ended up playing a four game match which I won handily: 4–0.

Here, for the first time, are the games of this USCF-rated match, played at a time control of 40 moves in 2 hours.

Note: Walter’s scoresheets for games 1, 3 and 4 match the information provided in The Stress of Chess, but the fourth score is confusing. The other games are dated August 29 and 30, but this has August 27 written on it and ends in a draw. Unlike the other three games there is nothing on the scoresheet to indicate it was game two (although the colors match perfectly). No other scores between Walter and Jude from 1967 were found in Walter’s records. It seems quite possible this other scoresheet was game two and we have presented it below as such.

The following day the U.S. Game in 30 minutes Championship was held at the same site and won by El Cerrito Grandmaster Ioan Christian Chirila with a score of 4½ from 5. Tying for second at 4–1 were Grandmasters Zerebukh and Carlos Matamoros and International Masters Keaton Kiewra and Faik Aleskerov. The event attracted 165 participants. John McCumiskey, Tom Langland and Judit Sztaray directed both events for Bay Area Chess.

International Master Jeremy Silman has just written an interesting article on the late Walter Browne and Dennis Waterman. All three have long Mechanics’ Institute connections, dating back to the early 1970s. The article can be found at http://www.chess.com/article/view/cracked-grandmaster-tales .

The Western States Open will be held October 16–18 in Reno at the Sands Regency Hotel and Casino. Go to https://sites.google.com/site/renochessclub/ for more information.

East Bay players looking to improve will want to check out Grandmaster Jesse Kraai’s Thursday Seminar at the Berkeley Chess School at 1845 Berkeley Way in Berkeley. Jesse is a strong believer that the study of our own games is the one true path to chess improvement, and each session will look at a game of one of the participants. The class is composed mostly of players between 1900 and 2300 and runs from 7 to 9 pm. Pre-register with Jesse at [email protected]. Each class is $40.

Portland Grandmaster James Tarjan will be returning to play in the Poker Stars International chess tournament on the Isle of Man from October 3 to 11.

The event, sponsored by PokerStars and the Scheinberg family, has over 100 players from 27 countries entered for the Masters with a week to go. The 63 titled players, including 35 GMs, 18 IMs and 10 players in the world’s top 100, make it the strongest event ever held in the British Isles. Follow the action at http://www.iominternationalchess.com/.

Las Vegas Master John Blackstone passes on the following win by Walter Shipman, played at the Marshall Chess Club and published in the Christian Science Monitor on March 7, 1966.

This is from the game Miles–Schneider, Philadelphia, 1980. Watch out for Black’s b-pawn. 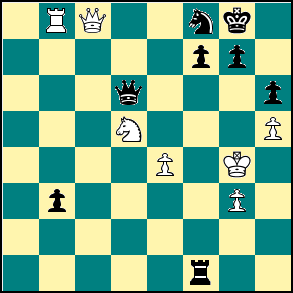 Since this column is about endgames, we’d better get rid of the queens.

White has won a piece, but now Black is about to promote. 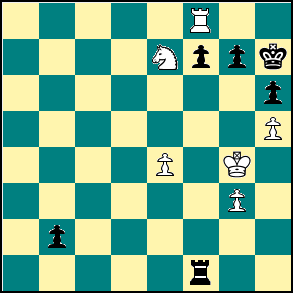 If winning a piece allows Black to promote, we must just give it back, and then he won’t be able to promote. Don’t believe that reasoning? Well, just watch. 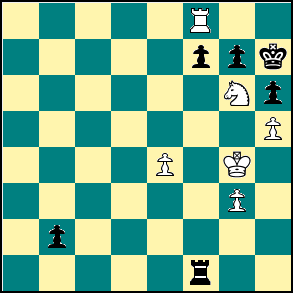 In view of this, maybe Black should get his rook off the f-file. Let’s see. 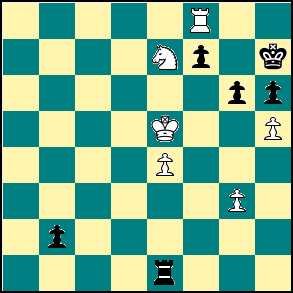 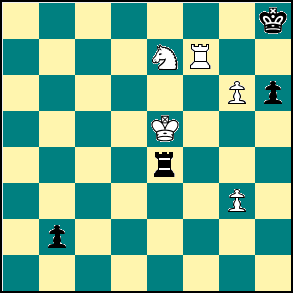 This position and its analysis are in the book Your Move!, by Yakov Neishtadt (Batsford, 1990).