It is an interesting question - why do so many players play the King’s Indian? Probably because it is easy to describe to students how to play it. ‘On the kingside your pieces stand close together. You advance them a little and castle your king. Then make a couple of pawn moves in the center, when your position is exactly the one Fischer used to have, and you need fear no one!’ But what the trainers and their young pupils forget is that Bobby Fischer, apart from his knowledge of the King’s Indian, also possessed the rare talent of understanding chess! - and this is a gift that God does not give to everyone!

International Master Emory Tate died on October 17 while playing in the GM Sam Shankland Championship in Santa Clara. We will have an obituary in the next Newsletter.

International Master Elliott Winslow and National Masters James Critelli, Uyanga Byambaa and Keith Vickers are the top seeds in the 85-player Fall Tuesday Night Marathon. The first round of action saw many upsets, with Asher Dan Eastham, David Smith and Enkhjin Gomboluudev defeating opponents that out-rated them by more than 500 points.

It’s still possible to join the nine-round Fall Tuesday Night Marathon with a half-point bye for round one. The event is both USCF- and FIDE-rated.

Kevin Kuczek, who gained nearly one hundred rating points in the last TNM, nearly pulled off a big upset himself Tuesday night.

Note: the following game can be viewed in PGN by going to http://chessclub.org/index.php and clicking on round one under Fall TNM.

If Black wanted a more double-edged game a better way to achieve it was with the immediate 12...0–0–0.

By a series of fine moves White has achieved a winning position, due to Black’s vulnerable king.

White has found the right plan, although it is not quite as dangerous as before.

Now Black is back in the game.

31.Qxg8 Rxg8 32.dxc5, with enough compensation for the queen, was obligatory.

Michael’s brother David was not so lucky. In the following game his opponent, 12-year-old Enkhjin (Cindy) Gomboluudev, rattled off 13 moves of theory (note—1400-players are not what they used to be) before varying from the theoretical 14…c4 or 14…h6 with 14…Be7, which looks quite playable.

David met the novelty with the exciting, but probably not quite sound, piece sacrifice 15.Nxb5. Black did not accept the offer (15…axb5) and soon found herself in a difficult position. White was winning near the end, but blundered into a checkmate in mutual time pressure.

The Mechanics’ entry in the US Chess League is currently in fourth place in the 10-team Western Division with a score of 5 from 9. Next Wednesday evening it finishes its regular season against the Rio Grande Ospreys, with a playoff spot on the line.

Wednesday Night Blitz at the club (Mechanics’ Institute) continues without interruption until Thanksgiving. Sign-up is at 6:30; round one at 6:40 pm. Late entries are accepted.

Congratulations to Grandmaster Jesse Kraai and Womens’ Grandmaster Tatev Abrahamyan, who tied for first in the Western States Open in Reno last weekend, with Jesse winning the playoff. The Mechanics’ won the top scoring team prize in the event, organized and directed by Fran and Jerry Weikel.

Good luck to Mechanics’ US Chess League team members Cameron Wheeler and Rayan Tagizadeh, who are playing in the 2015 World Youth Championships in Greece. They will be joined by MI Grandmaster-in-Residence Nick de Firmian, who will serve as one of the US coaches.

Here is a fighting win played near the end of the tournament.

The third and final article in former M.I. member Jeremy Silman’s Cracked Grandmaster Tales series makes for an entertaining read. It can be found at http://www.chess.com/article/view/final-cracked-grandmaster-tales

2) A chess poem by Dennis Fritzinger

pity has no place on the chessboard

I set the chess set up to play
a chess game with my dad;
and right away I could tell
his moves were very bad.

I decided to give him a break,
and made some weak moves too;
then suddenly he played better,
almost as if he knew.

realizing my mistake,
I tried to right my game;
like a ship steered to an iceberg,
I had just myself to blame.

no matter what it was I tried,
I couldn’t avoid my fate;
and so the inevitable happened
and I had to face checkmate.

so take a lesson from me--
it’s always a mistake,
if you have a winning position,
to give your dad a break.

It looks like Black has this wrapped up with his h-pawn; does White have a chance? 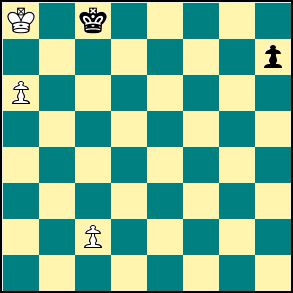 White has two chances: drawing by stalemate, or Black making a fatal error. He wisely plays for the former. 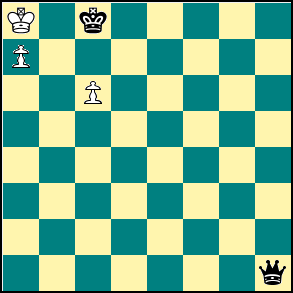 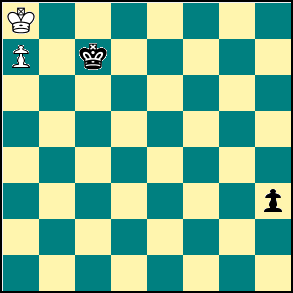 Similarly, if Black starts with 1 ... h6, White just rushes the c-pawn down to c7 as above for the stalemate.