Chess wise I would say don’t use computers, use your brain! On a general note my advice would be that in the race to be more successful we tend to forget what is more important in life—human relations. That’s why life has become so fast. It’s like a race, some sort of global hypnotization. We should slow down and understand that loving each other is the right way to live life.

FIDE Master James Critelli and Experts Josiah Stearman, Natalya Tsodikova and Igor Traub are tied for first in the Fall Tuesday Night Marathon with 4½ points from 5. Four rounds remain to be played.

From round 5 of the Fall Tuesday Night Marathon:

Batchuluun Tsegmed was the winner of the 15th Pierre St. Amant Memorial, held November 14. The Mongolian Grandmaster scored 4½ out of 5 to top the 21-player field. Tying for second at 4–1 were National Master Josiah Stearman and Venkatagiri Acharya. Tergelsar Enkh won a copy of Walter Browne’s The Stress of Chess for turning in the biggest upset. Attendance was significantly lower than usual for this event, in part due to its being held on the same weekend as the Emory Tate Memorial in Fremont. Normally the CalChess Clearing House prevents double bookings, but here it was unavoidable as Bay Area Chess wanted to honor the late International Master in a timely fashion.

Hey folks, we just have been written up by the San Francisco Chronicle.

It stars Peter Grey, an 80-year-old MI member since the mid-1960s who played in the inaugural Tuesday Night Marathon in 1973 (and has played in almost every one since!) and Enkhjin Gombuldeev, a 14-year-old female player from Mongolia (now living in El Cerrito) who has played in TNMs with her mom for a couple of years.

Check it out here: http://www.sfchronicle.com/thetake/article/The-quirks-of-chess.

TNM regular Ashik Uzzaman writes about the upcoming match at the MI between tech titans TubeMogul and DropBox on his blog at http://dragonbishop.blogspot.com/2015/11/tubemogul-vs-dropbox-chess-match.html.

The Tuesday Night Marathon schedule for 2016 is now available:

All events are both USCF and FIDE rated.

We wrote about the late Emory Tate in Newsletter #724, but neglected to mention that last April–June he not only took part in tournaments in the Netherlands, but also several events in Bulgaria, Italy and Spain. Chess and travel were two of Emory’s favorite things to do in life, and we are glad he was able to make one last European road trip before his passing. 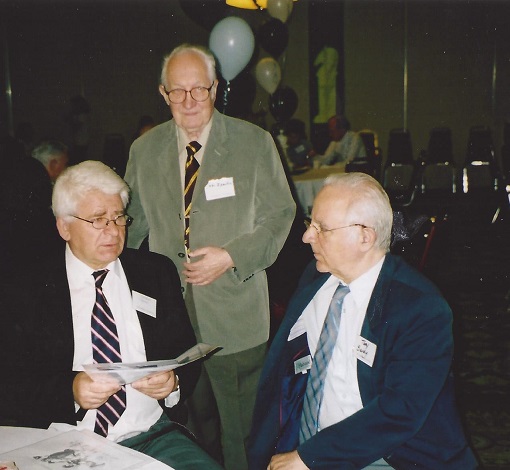 The following game was played in the U.S. Game/30, held September 27 in Santa Clara. Notes to the game are by the winner Arun Sharma, a math professor at UC Berkeley. Sharma is best known to American chess players for his selfless promotion of the game, which includes organizing international tournaments and serving as the technical director of the US Chess League. If not for these duties he would have become an International Master several years ago.

This was definitely not a perfect game. But certainly it was interesting and exciting, worthy of a bit of analysis. I found it somewhat amusing that after the game my opponent asked me if playing in this way was my “usual style”—when in some sense this game was as far from my usual style as it could have been. I’ve often been criticized for being too reliant on calculation—refusing to sacrifice material in a speculative fashion, only if I’m able to see a firm conclusion. Well that’s exactly what I did to an extreme degree in this game, though I will admit it certainly wasn’t the original plan!

A surprise. I do not recall ever seeing Black play an early g5 in this particular line/setup, as retreating with Be7 is pretty much universal. The computer seems to think that g5 is fine, but it feels somewhat suspicious to me.

I was calculating a lot of lines here, in several of which Black would follow his aggressive g5 with f5. With the possibility of the f-file opening and g4 occurring, f2 becoming a target did seem entirely possible. As such I decided to be “safe” and force the bishop back to an “inferior” square. Hard to know how the game might have progressed had I not thrown this in, but it likely would have taken a completely different route as the change in position of the bishop ending up having a much bigger impact than I expected!

A surprise, as I did not expect Black to so readily open the h-file with my rook stationed on h1, figuring he would wait until I committed to castling, or simply not capturing if I did not castle.

A move I completely overlooked as I expected 16...Bg5 17.Nxg5 Qxg5 18.Rxh6, where White should be winning in the ending without too much difficulty.

I was proud of how clever I was, allowing my opponent to take a free piece with check here without any anxiety. Of course it’s much easier to not have anxiety when you are actually winning by force if they take the bait, as after 17.Qxh6 Bxc3+ 18.Kf1 Re8 19.e5! Black can’t avoid mate. Unfortunately I didn’t realize how strong the e5 idea was in general, as instead of 17.Qxh6, much better is 17.e5! Bg7 18.Ne4!! gxf3 19.Nf6+, simply winning for White.

I sort of wrote this off as a “computer line”, but when I showed the game to GM Zherebukh, he felt this was something that was quite seeable. While of course Black doesn’t have to take on f3, if he does not White will not be in danger of losing material and should have a large advantage.

Not necessarily the objectively best move (though close), but certainly the move which puts the most pressure on Black. I kind of wonder if I would have had the guts to play like this in a normal time control game, as definitely the fact that we were playing G/30, with my opponent already somewhat low on the clock, was motivation to go for the line which might be hardest for him to meet practically. A good decision, it turns out, as the other line I was mostly considering is simply bad for White: 18.e5 Bg7 19.Qh7+ Kf8 20.Nh4 Nxe5.

Of course the move I had planned to play on Bxh4. Once again objectively perhaps not best, as the computer wants the strange looking 19.gxh4 gxf3 20.e5 Nxe5 21.Bh7+ Kh8 22.Be4+=, but once again 19. gxh4 did not even cross my mind. The main alternative I had considered here was 19.Nxh4, which is also close to equal as White certainly has some compensation for his slight material disadvantage. But this not seeming especially good, I went for the gusto!

It might have been time to congratulate Black on defending appropriately the last few moves and earning a well-deserved perpetual. But given the general factors: tournament standing, having White, and my opponent having only a couple minutes on his clock, I again went for the throat!

Once again, objectively might have been best to just go with 21.Qh7+ Kf8 22.Ne4 Qg7 23.Qxg7+ Kxg7 24.Nxh4 with an endgame that should probably be OK for White, but certainly if anyone is on the worse end it is him. And after declining a perpetual the move before, rather hard psychologically to go for that!

After a fantastic defensive effort, especially considering his super-low clock, my opponent finally goes astray. Given more time I’m sure he probably would have found 25...Re7!–+, the move I was most concerned about during the game, and indeed the computer gives Black a big advantage there. Granted, I think it’s still far from easy practically, particularly with a low clock, but at that point White’s attack is mostly beaten back. My plan was 26.Nfg5+, where Black must find the cold-blooded 26...Kg8! walking right into a discovery; instead the more natural 25...Re7 26.Nfg5+ Kh8 27.Nd6 leaves things much more in doubt.

Today San Diego chess is more vibrant than ever, with International Masters John Watson, Cyrus Lakdawala and Keaton Kiewra all calling the nation’s eighth-largest city home. The San Diego Chess Club has a permanent home in Balboa Park and the SD Surfers made their debut in the US Chess League this season.

San Diego chess has deep roots as evidenced by the following game unearthed by National Master John Blackstone. It was published by E.H. Bryant in his chess column in the Sunday Oregonian on November 20, 1921.

The US Chess Federation membership in 2015, at over 80,000, is higher than it was in the Fischer boom years in the early 1970s, but here is one record that will be hard to beat. According to the Christian Science Monitor for October 11, 1972, over 20 million dollars of chess supplies had been purchased by Americans since the beginning of the year!

National Master James McCormick, who will turn 80 next year, has won the Washington State Championship seven times, second only to J.L. (Jacob Leonard) Sheets’ eight titles. That said, a strong argument can be made that McCormick played his best chess during prolonged stays in Northern California in the early 1970s and 1990s. Here is a sharp battle against Walter Browne, who had received the Grandmaster title earlier in the year.

Mechanics’ Chess Coordinator Paul Whitehead tied for first in the 1978 US Junior Closed along with Yasser Seirawan and John Fedorowicz. Paul, who turned 18 during the event, used his favorite Rossolimo Attack to win a nice game against one of the pre-tournament favorites.

Go to https://instagram.com/p/984vNHDGCd/ to see two very nice photos of Fabiano Caruana and Bruce Pandolfini separated by over a decade. Both were taken in Washington Square Park at the chess tables when it was raining. The first is from the early 2000s and the second from November 2015.

Bishop-and-pawn endings can be tricky. Try this study: 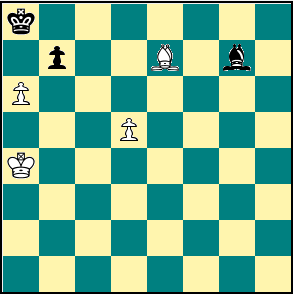 What could more natural than to push a passed pawn? 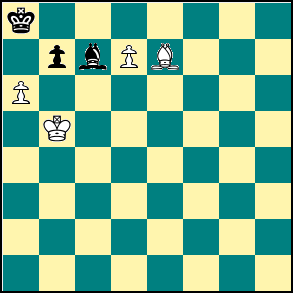 Suppose White had captured instead with the king. Then 4 Kxa6? Kb8 5 Bd6 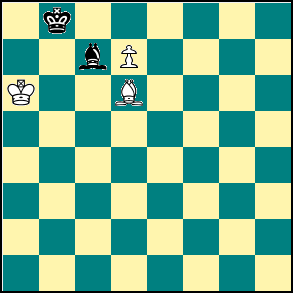 Black to move (analysis, after 5 Bd6) 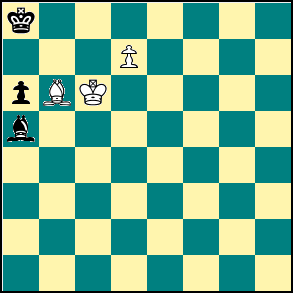 Black is helpless. He cannot bring his bishop to the other side in one move.

This elegant study was composed by Genrikh Kasparyan in 1928.