First of all you must try to solve studies. There are many fantastic authors like Kubel, Grigoryan, three times World Solving champion David Gurgenidze from Georgia (he has some fantastic studies on rook endgames). Really, if you want to improve your calculations and understanding of the game then you must solve these studies, and also ones by other great composers like Kasparyan and Pervakov. Also solving combinations is a good way to improve. Dvoretsky’s books are very good and have many complex questions in them. I have not really studied recent books written by new authors, not because I don’t like them, but because I am an old-style player. Three hours of studies and three hours of practical combinations will help you immensely. Put the time on your clock, begin with not so hard problems. If you begin with mate in five moves of course it will be tough for you, but if you start with mate in two and slowly move up, it won’t be too difficult.

—Baadur Jobava, interviewed by Sagar Shah, in answer to the question
of how to improve one’s tactical vision.
Go to http://en.chessbase.com/post/living-life-the-jobi-way-1-2 for the interview.

The 15th Annual Guthrie McClain Memorial G/45 will be held this Saturday at the Mechanics’ Institute Chess Club.

Top seed James Critelli (2376) and Expert Igor Traub are tied for first in the Fall Tuesday Night Marathon at 6–1 with two rounds to go for the 102-player field. Tied for third, a half-point behind are Experts Josiah Stearman and Mike Walder. Heading a large group on 5–2 is International Master Elliott Winslow. The Fall TNM is the sixth consecutive event in the series which has attracted over 100 players.

From round 7 of the Fall Tuesday Night Marathon:

Grandmaster Sam Shankland of Orinda is back over 2650 FIDE after leading Colegio New Hope to first in the Costa Rica Team Championship which finished November 30.

Sam’s score of 6½/7 (a draw as Black against Russian Grandmaster Romanov) puts him at 2651, a point outside the 100th-rated player in the world.

Walter Browne after winning the US Open in 1972 (Photo: Col. Paul Webb)

It’s not just chess games that he wins. Browne will state flatly, “I’m the best all-around gamesman in the world,” and then challenge you to a hand of poker, a game of backgammon, a Scrabble match. Or ping-pong or tennis or pool or Monopoly or any of a dozen other games. Walter Browne is a Vince Lombardi dream-come—true: winning, at whatever game, isn’t the most important thing—it’s the only thing.

Just as the flag on Browne’s clock is beginning to tilt, to drop him into a time-forfeit, Douglas Root learns about Browne and winning. Browne sacrifices a rook for a knight: click-thump. His black queen comes in to make a lunch of Root’s pawns.

A crowd is drawn from the other tables to watch. Root, still with 25 minutes to play with, is deep in concentration. Browne reaches to his right and pours from a bottle of Perrier into a plastic-foam cup, then returns his attention to the board, sipping. A large Hershey bar sits on the table beside him, still in its wrapper.

A series of checks eats up moves but little time. At last, Browne’s flag falls, but he’s two moves beyond the limit; he’ll have another hour for his next twenty moves. The game stands at king, queen, knight and three pawns for Browne, king, queen and rook for Root. Browne starts on the Hershey bar.

He moves again, then gets up and strides purposefully around to check out the other games. Browne walks in an electrified lope, engaging every muscle of his body in a rapid pacing like a man walking over hot coals. This is the Cook’s Tour of the tournament: Browne pauses at each game only long enough to size up the situation, then moves on. Left behind, alone, Root stares at the board, trying to puzzle out exactly how it all went wrong. Browne comes back for a sip of Perrier, whips his eyes over the board, and resumes his tour. On Browne’s second return, Root puts his hand out to stop the clock-he resigns. The devil has his due.

Lone Pine has not been a good tournament for Browne, this victory notwithstanding. He lost his first game to another sixteen-year-old, a New York prodigy named Joel Benjamin, and managed only a draw in the second game (“i hate draws,” Browne says, “they make my stomach turn”) before getting a win in the third round. Now, with the win over Root, he thinks he’s hitting his stride. Browne is coming off two top finishes in tournaments in Iceland and Holland; his first days in California, he says, he was simply worn out.

But Browne is not one to let anything stop him from competing. Prior to his trip to Europe, he broke his ankle playing racquetball. Although his foot is in a cast, Browne wouldn’t use crutches or a cane, nor change his plans. “You should have seen me hobbling through airports,” he says, grinning. Exhausted, he nonetheless couldn’t get to sleep for hours upon arriving in Holland, becase of the pain. “He was in agony,” says his wife, Raquel, her “I’s” coming out like elongated “e’s” in an accent that is pungent with her native Argentine Spanish. She functions as a combination factotum, den-mother and cheerleader for Browne. “I had to put ice on his foot every night.” Browne still managed to beat Viktor Korchnoi, the leading contender for world champion Anatoly Karpov’s crown, and finish in a tie for first place.

“I’m a bit obsessive,” Browne will admit. He speaks a pouty Brooklynese, unmitigated by years of living In Berkeley. “But, to me, chess is a very satisfying game. I’m doing something I like to do. It’s as satisfying to me as art is to an artist, music to a musician. It’s an art. It’s a science. It’s math. It’s logic. It’s will-power. It’s strength under adversity.” He leans forward a bit and lets the devil shine through his eyes. “It’s the absolute desire to overcome.”

The desire to overcome had led Browne to a mastery of more games than most people will ever learn the rules to. Scrabble? He can beat 99 out of 100 experts, regularly, says self-proclaimed U.S. Scrabble champion Leonard Schonburg. Browne knows every two-, three-, and four-letter word in Funk & Wagnalls, most five-letter ones. Match tiles with him and he’ll toss in words like rotl (a unit of weight) or ouistiti (a type of monkey).

Tennis? Browne will demolish 90 or 100 good opponents. His uncle trained for the Davis Cup, and Browne says that he himself has often thought that tennis would have been an interesting career. “The dream,” he explains, “would be to be really good in physical game, like tennis, and in a mental game, like chess-champion in both. But of course it’s only a dream.”

Ping Pong? Browne will beat four out of five. Blackjack? He’s a terror in Las Vegas. Roulette? He once dreamed of breaking the bank at Monte Carlo. “Biased wheels,” he will say cryptically.

“I’m very good at abstract logic,” Browne says by explanation for his abilities. “I’ve got the ability to visualize a series of things in my head without moving them.” Is there any game he’s not good at? “Sure-games I haven’t played.”

Browne tells of the time he played Schonburg in a combination backgammon-Scrabble-Pool match. Browne won. Another time, he and a fellow gamesman invented a physical-mental decathlon-long jump, Las Vegas chess, backgammon, ten events in all. Browne won, 6½–3½. Bridge expert Oswald Jacoby has sometimes been touted as the best all-around gamesman in the world. Browne is straightforward about that: “I like Jacoby. I respect him. But I’d also like to get up some money and play him.”

Having a stake is important to Browne. “Even when I’m playing somebody better, I like to play for something so you know the guy’s trying. I have a saying: “ If you win, you earn. If you lose, you learn.” He adds he now plays only “social” games, which he defines as “not playing with people who can’t afford to lose.” Browne adds, “When I was seventeen years old, playing poker in New York, I had a list this long of people who owed me money. Now, I couldn’t care less about the money. Now I think, “Those poor suckers, so what?” 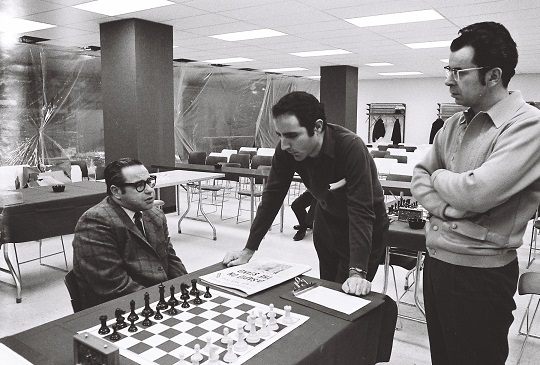 Anthony Saidy is a living legend of American chess, who has played and beaten pretty most all of the top American player of the 20th century, from the 1950s onwards. Although he missed a few (he never played Max Pavey, Isaac Kashdan, Herman Steiner or Reuben Fine) he did beat most of the stars of the 1950s including Sammy Reshevsky (4–3 for Sammy in seven US championships), Olaf Ulvestad, Anthony Santasiere, Albert Pinkus, Herbert Seidman, Robert and Donald Byrne, I.A.Horowitz and Arthur Bisguier.

The decline of English chess is the theme of a recent article by Stephen Moss in The Guardian, which can be found at http://www.theguardian.com/sport/2015/nov/20/grandmaster-crash-how-english-chess-pawned-its-future.

While there is no question that English chess is not what it once was it does still have 5 players in the top 100 (even if a couple are not full-time professionals) and Gawain Jones at 2615. However after that things drop off precipitously with only eight more players rated over 2500 and little help coming up. It looks like a combination of English chess declining and the rest of the world improving which has led to the current state of affairs.

Andy Ansel sends in the following miniature by the late Igor Ivanov, which is not to be found in any database.

Can White take advantage of his b-pawn, or will Black prevail in this ingenious study? 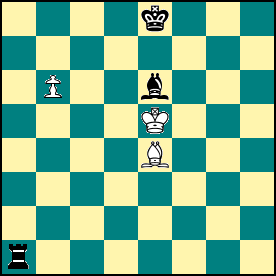 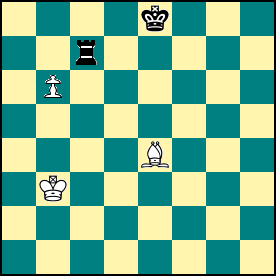 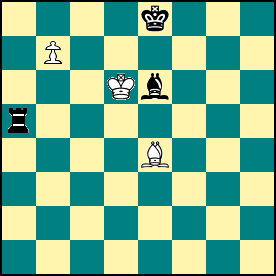 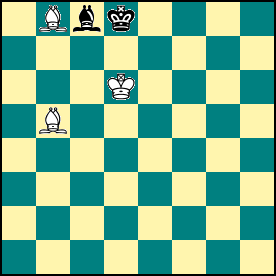 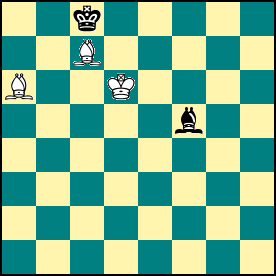