I was completely winning. If I don’t kill myself tonight I’m going to live a thousand years.

—Ivan Sokolov, being interviewed after losing to Magnus Carlsen at Tata Steel in 2013.
You can find the short video clip at https://www.youtube.com/watch?v=pTg46f85RBQ

The Winter Tuesday Night Marathon started this past Tuesday. It is still possible to enter the eight-round event with a half-point bye for the first round. This tournament is both USCF- and FIDE-rated. 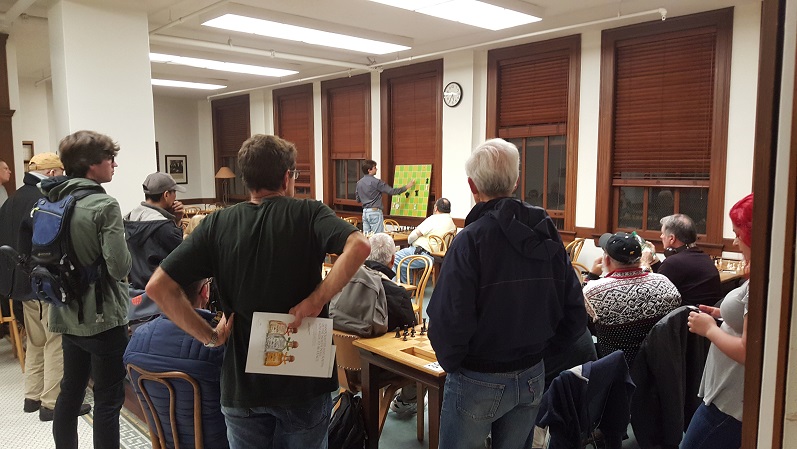 GM Sam Shankand lectured to a full house before the start of round 1 (Photo: Elliott Winslow)

Each of the Wednesday Night Blitz events held over the holidays attracted eight participants. Here are the results:

Congratulations to MI member Daniel Naroditsky, who turned in a 2670-FIDE performance in the Qatar Masters, losing only as Black to Vladimir Kramnik and Wesley So. 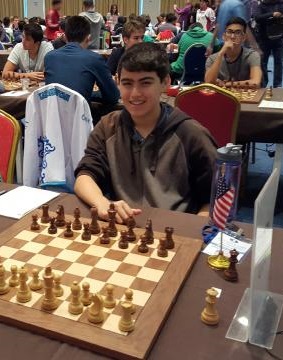 Cameron Wheeler at the World Youth in Greece in 2015 (Photo: Kerrie Utsumi)

Cameron’s score of 6½ from 9 included wins over International Masters Andranik Matikozian and Darwin Yang, and the following crucial last-round victory.

The event was won by Grandmasters Gata Kamsky and Alexey Dreev and International Masters Eylon Nakar of Israel with 7/9 to win just under $7000 each. 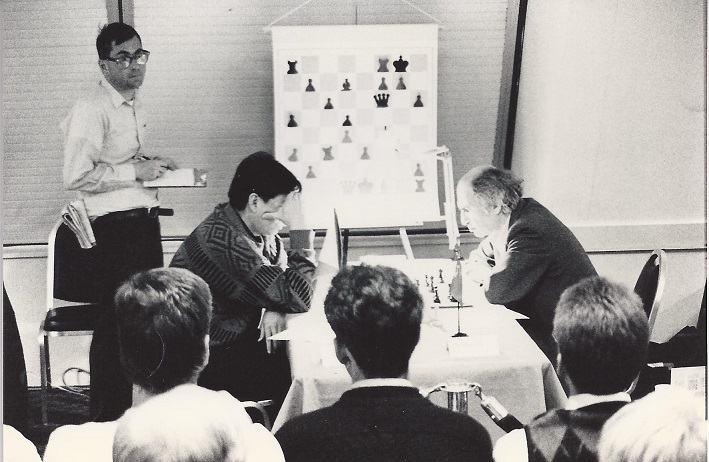 The tributes for the late Steve continue to appear. Two of the best we have seen are by his good friend International Master Jeremy Silman http://fr.chess.com/article/view/a-legendary-chess-zen-master-has-died?page=2, and by Joe Rivano Barros, which first appered in the Mission Local and was later picked up by ChessBase http://en.chessbase.com/post/us-master-steve-brandwein-passes-away-at-73.

Tournament games and results of Steve are hard to find as he didn’t keep any records, but more details on his performance in the 1964 U.S. Open have surfaced. Here are Steve’s round-by-round results that lead to his winning prizes for top Expert and highest-finishing Massachusetts player. This event raised Steve’s USCF rating close to 2300.

A memorial will be held for Steve at the Mechanics’ Institute Chess Club on January 24 from 1 to 5 pm, and all are welcome. Those who are unable to attend are encouraged to send their remembrances to [email protected], to be shared during the event.

3) A Chess Poem by Dennis Fritzinger

the whales will eat tonight

i announced
at the beginning
of the tournament
i was playing
for the whales.
after i
had won it,
steve brandwein quipped
“the whales
will eat tonight.”

4) The Ultimate Gamesman—Walter Browne (Part Five), by David A. Fryxell 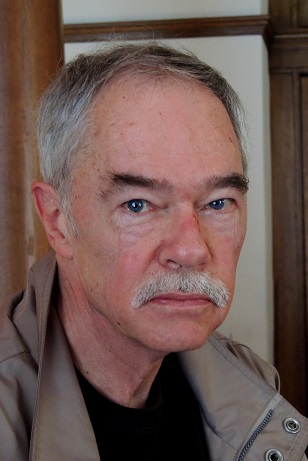 March nights in Lone Pine are brisk, but Browne lopes along as though it were July, wearing just a thin sportcoat over his sweater. He announces he’s withdrawing from the tournament. “I can’t play serious chess here. I haven’t lost a game with White since October, and now I come here and lose twice. It’s just not a serious tournament – 45 moves in 2 ½ hours! In Europe they play 40 moves in 2 ½ hours. And here they pair opponents Swiss style – winners play winners, losers play losers – instead of a round-robin, where everybody plays everybody. It’s all to help these children, these patzers.

He makes his case again to one of the tournament organizers, stopping outside the Dow Villa motel. The man nods and nods, then points out that Browne could still win, at least $600. “You know what I say?” Browne replies, his face lit by the thin red neon, his voice without venom. “I say you can take that $600 and buy flowers for Kashdan’s grave.” Walking away, he admits, “I know this sounds terrible. It’s just, you know … A bitter smile.

Over dinner at the Merry-Go-Round Restaurant, Browne tries to steer the conversation to pleasanter topics, but the incident with Kashdan keeps coming up.

“I told him not to play in this tournament,” his wife points out for the third time this evening. “I told him he should rest.”

He slices off a chunk of sirloin. “You know, I was just noticing. The size of this steak keeps getting smaller every time I order it. First time they give you a huge steak, really big. I’ve been here three times, and each time the steak has been smaller.”

Chess in the United States is a very small piece of the total sports and games action. “American’s don’t like to think. “ Browne says. By contrast, he tells of the reception he got in Iceland and Holland: “I know this is going to sound egotistical, but it’s true. I’m a popular figure over there. There were 40 stories in the Icelandic papers about my trip. On the flight back from Reykjavik, four people asked for my autograph, and one guy wanted to buy my pocket chess set. Per capita, Iceland has the most chess players in the world. In Russia, Yugoslavia, chess is second only to soccer.

Will Clipson writes that a new chess club has formed in Pinole, which meets Wednesday evenings from 5:30 to 9:00 pm at the East Bay Coffee Company (2529 San Pablo Ave). Player strength is about 1200 to 2300, except when Craig Mar shows up, when it is stronger. Most days there are six to eight players.

A dozen U.S. players are rated over 2600 FIDE on the January 2016 list, including two Mechanics’ members.

The strongest tournament ever held in Oakland was won last weekend by Mongolian Grandmaster Batchuluun Tsegmed with the outstanding score 5½ from 6. Among his victims were FIDE 2600s Parimarjan Negi and Yaroslav Zerebukh. These two Grandmasters were joined in a big tie for second at 4½ with Grandmaster Oliver Barbosa and International Masters Richardo De Guzman and Istvan Sipos. 127 players competed in the Bay Area Chess event, directed by Tom Langland.

In the following game position, we imagine White ready with a queen, eagerly awaiting his chance to promote the c-pawn. But to do so, he has to stop the annoying checks. Can he do so? 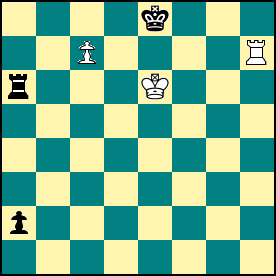 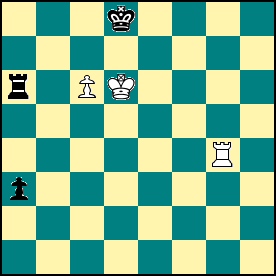 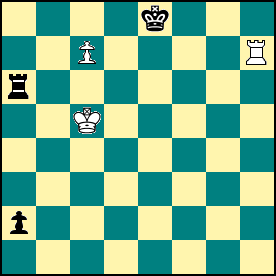 and the players agreed on a draw in the problem position.

However, White did not see the winning strategy: 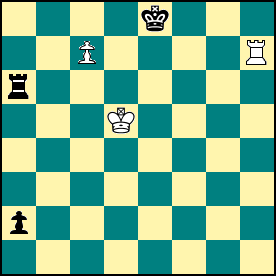 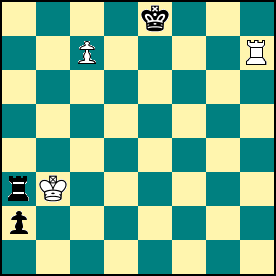 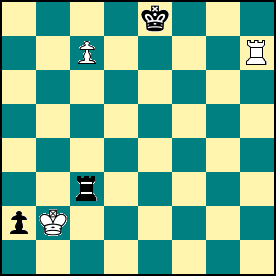 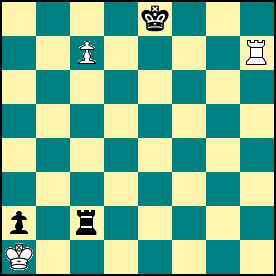 This ending and analysis comes from the classic How to Play Chess Endings, by Eugene Znosko-Borovsky.