Probably Bobby Fischer at his best. Because the precision and energy that he played with is just unmatched in the history of chess. So Bobby Fischer from 1970 to 1972.

—Magnus Carlsen, answering Gabriel Sam’s question
“If you could play one of all the players in history, who would you play?”

The Winter Tuesday Night Marathon has 119 players after two rounds and will surpass the all-time TNM attendance record of 121. It is still possible to enter the event with half-point byes for the first two rounds.

The first round of the TNM saw almost all the rating favorites victorious, including the following miniature.

The Wilkes-Barre variation, named after the Pennsylvania coal mining town.

Arjun Sankar and Samer Sabri were the upset kings (653 and 491 points respectively) and won copies of Walter Browne’s The Stress of Chess. A complete list of prize winners can be found at www.chessclub.org.

A memorial will be held for Steve Brandwein at the Mechanics’ Institute Chess Club on January 24 from 1 to 5 pm, and all are welcome. Those who are unable to attend are encouraged to send their remembrances to [email protected], to be shared during the event.

2) The Ultimate Gamesman—Walter Browne (Part Six), by David A. Fryxell 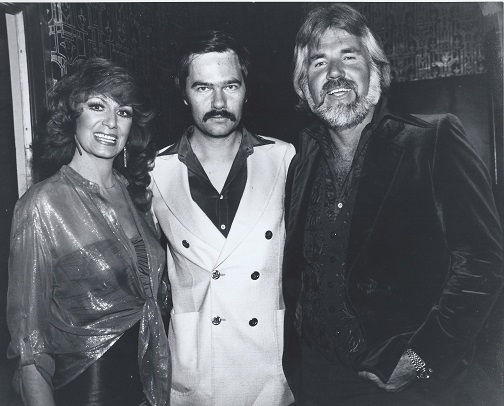 Browne is perhaps the game’s most ardent salesman in America. Two separate deals that would have matched him against Karpov, chiefly as a publicity stunt, fell through last year—$75,000 and $50,000 deals, one including TV rights to the game. “It was just a stunt, but it would have mushroomed, “Browne says, shaking his head. “I was going to take just over $10,000 because I thought it would be a great promotion for the game. But Karpov didn’t want a measly $25,000 for two hours’ work.”

Another aborted deal would have brought Browne $10,000 for breaking the world record for simultaneous chess—over 600 games at once. Browne already holds most of the records for chess exhibitions, which allows amateurs all over the country to play the game’s best. In 1971, he defeated 29 challengers simultaneously in an incredible 45 minutes, for a record that probably will never be topped. In 1973 Browne played 105 humans and one computer in a record seven hours, twenty minutes. He polished off the computer in just fifteen moves: “They have no imagination, no creativity,” he explains. “With a computer, you have in effect a good average player who can see an infinite number of moves. But in chess, the exception is the rule, and how do you put that into a computer?”

If Joe Namath had done something comparable in football, or Henry Aaron in baseball, we would have all read about it. Howard Cosell would have fawned over the gifted performer and the President would have posed with him in the Rose Garden. The United States Chess Federation didn’t even give space to Browne’s tour.

Fame, Browne says, isn’t important to him. “It bothers me only from a financial point of view. I should get more respect in this country. Whether I get famous is something else.”

He is not famous, nor is he particularly rich by sports superstar standards. But Walter Browne is not an unhappy man. “I don’t want to have to work for anyone, ever, and I’ve lived up to that,” he says. “I’ve never had to do something I didn’t want to, for money. What I’m doing is meaningful; it’s creative; it’s an art form. Chess games are recorded; they live on. I can keep playing chess all my life. I’ll still have chess at age 80, 90—others in sport have to give it up at 35.”

In Lone Pine, California, at midnight on a weeknight in March, the only people on the streets are chess players. Where the sidewalk ends in dark tress outside the Lone Pine High School, Browne encounters a Russian player who wants to buy some chess bulletins Browne is selling. They walk together back to Browne’s hotel.

Browne tries to share his tale of woe and Kashdan’s perfidy with the Russian, who may or may not speak enough English to understand. Chess isn’t popular enough in the United States. Kashdan is out to get him. His three minutes were worth more because he had fewer left.

The Russian just shakes his head. At least this is not Russia, he says. “This country is gold.”

Browne, not The Savage now at all, nods his head and chuckles in the cold mountain night. It’s true: in America there are still things to be won. For Walter Browne, for now, that is enough.

…While I’m a long way from Capote in either writing ability or memory skills, I know from experience that is indeed possible for writer to fly solo, without a notebook. When TWA Ambassador sent me out to a California chess tournament to interview chess champion and jack-of-all games Walter Browne, I found myself hounding the great gamesman for interview time. Every moment, it seemed, he was either actually playing chess or preparing for the next match. I finally got the time I needed by going to dinner with him—but the restaurant Browne chose was too dark to take notes, even if I’d been able to wield a pencil along with my knife and fork. So we talked—more of a dinner conversation than a formal interview, the casual atmosphere seemed to put him at ease. And then, after I bade Browne goodnight, I raced to my tiny hotel room. Frantically, I wrote down all I could recall of the evening’s several hours of revealing conversation. Much to my amazement, I remembered almost everything of importance.

4) US Championships in St. Louis this April

SAINT LOUIS (January 7, 2016)—For the eighth consecutive year, the nation’s top 24 chess players will gather in Saint Louis to compete for the titles of U.S. Champion and U.S. Women’s Champion.

The 2016 U.S. Chess Championships, boasting one of the strongest fields of American men and women ever assembled, will be held simultaneously at the Chess Club and Scholastic Center of Saint Louis (CCSCSL) from April 13 through April 29.

The 2016 U.S. Women's Championship will feature seven-time U.S. Women’s Champion GM Irina Krush, who seeks to maintain her iron grip over an up-and-coming field of American females. The 12-player round robin will also include 8 players selected by the January 2016 U.S. Chess rating supplement, two wildcards and the U.S. Junior Girls Champion, 15-year-old WIM Ashritha Eswaran, who also appeared in the 2014 U.S. Women’s Championship.

“We’re excited to assemble America’s best chess players in Saint Louis for the eighth year running,” said Tony Rich, Executive Director of the CCSCSL. “The top rated American players have all expressed interest in participating in the 2016 U.S. Championships.”

The U.S. Championship will culminate with the top three players competing in a special blitz round robin format against legendary chess champion Garry Kasparov. The round robin matches will take place over two days upon the conclusion of the Championships.

The 2016 U.S. Championships will be streamed live daily on www.uschesschamps.com, featuring play-by-play and analysis from the world-renowned commentary team of GM Yasser Seirawan, GM Maurice Ashley and WGM Jennifer Shahade. Live spectators may also view the action in the tournament hall of the CCSCSL, which offers additional on-site commentary led by grandmasters. For further details, visit www.uschesschamps.com.

A strong (2549 FIDE average) 10-player Grandmaster round robin will be held January 19–23 in Burlingame. 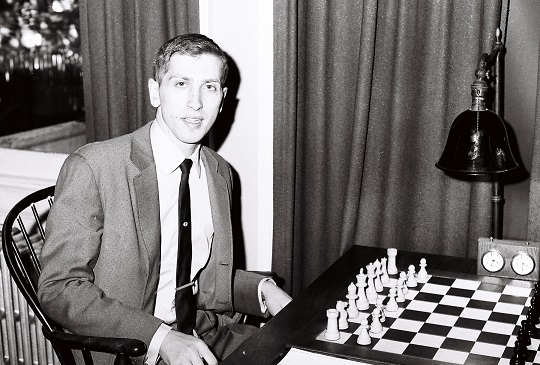 The second book of John Donaldson’s four volume series on Bobby Fischer, written with fellow International Master Eric Tangborn, is out in a Kindle edition at http://www.amazon.com/dp/B01ACW1C02. This 254-page work covers all of Bobby’s simultaneous exhibitions (except 1964) and blitz games. The highlight is 62 pages devoted to Fischer’s 1971 month-long tour of Argentina after his match with Petrosian.

Volume one in the series is a 398-page third edition of Legend on the Road, which offers an in-depth look at Bobby’s 1964 transcontinental tour of North America. It can be can be found at http://www.amazon.com/dp/B019JX3GUY. The third book in this 1200+ page project will be devoted to Fischer’s writings and the fourth is biographical in nature. All computer users can read Kindle products with a free app.

I just wanted to let you know that I have finished my chess e-book for beginning chess players. It's free to download on my new website, www.laurengoodkindchess.com/free-chess-ebook.

In this book, I talk about how to win a chess game by asking questions. In the second half of the book, I talk about how chess has benefited my life in many ways. I also invite chess players to Like my Facebook page, https://www.facebook.com/LaurenGoodkindchess which includes what I hope are fun and useful discussions about chess. People are also welcome to follow me on Twitter: https://twitter.com/LGoodkind.

I hope this effort will inspire and grow the female chess player population.

White is a pawn up, but his b-pawn is threatened, and his king is in a poor position. Since this is a study, you can expect the unexpected. Or not. 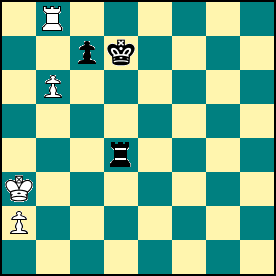 When you have a material advantage, it’s often useful to simplify. So,

Black must accept this sacrifice or lose his rook. 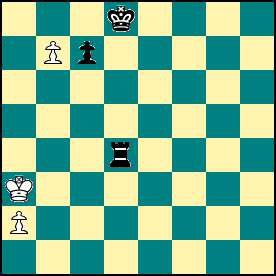 Now the way is clear for the pawn to promote, and the black king can’t defend. But what about the rook? 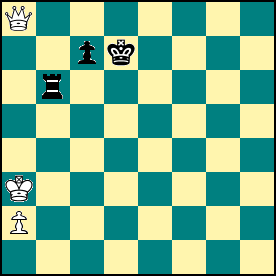 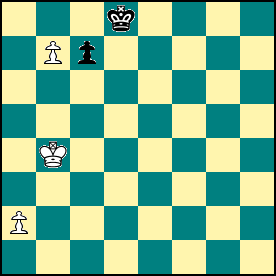 4 Kxc5? draws: the c-pawn is doomed, and then the black king just goes to the corner. 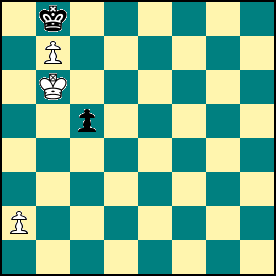 Black’s satisfaction in being a queen up is short-lived. He won the race, but 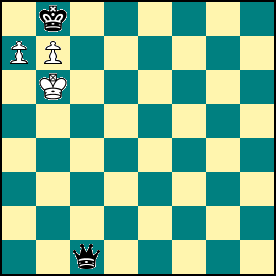