I don’t think I ever played Brandwein, though it’s possible he beat me so badly that I have blotted the game out of my mind. I do remember well, though, appearing on the Shelby Lyman show in 1972 in a studio in Albany with Ken Regan, and Brandwein was the previous guest, and when he said ”Mad dog Kissinger invited Fischer to the White House to meet Nixon, the murderer of the Vietnamese people, ”those running the show went into a panic probably thinking Nixon would see to it that the station would lose its license. They called a quick station break and when the show resumed, Regan and I had replaced Brandwein and the show made repeated apologies after that for some time for the “gratuitous” comments.

From round 3 of the Winter Tuesday Night Marathon: 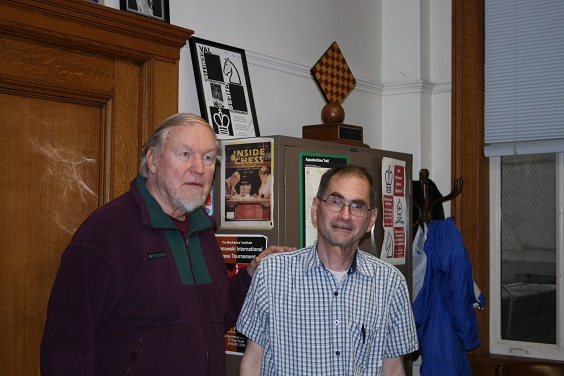 A memorial will be held for Stephen Brandwein at the Mechanics’ Institute Chess Club this Sunday, January 24 from 1 to 5 pm, and all are welcome. Those who are unable to attend are encouraged to send their remembrances to [email protected], to be shared during the event.

Just a reminder: there will be a blitz every Wednesday night from now until April. Sign-up is at 6:30; round one is at 6:40 pm. Late entries accepted.

Last week (January 13) there were 8 players; the results were 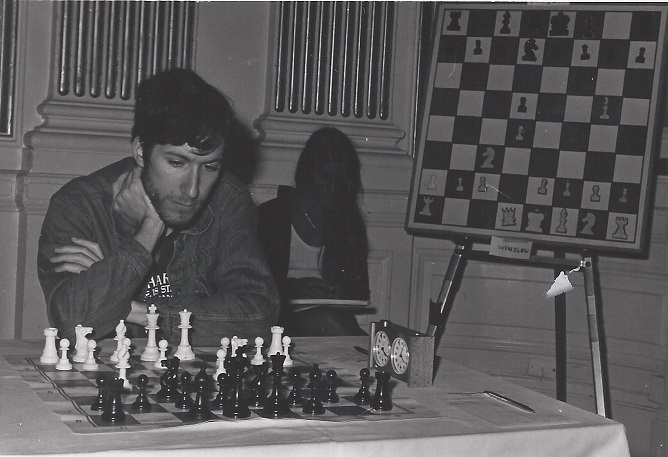 The Mechanics’ Institute Chess Club has had a long and interesting history. One of the things that make it so special is the many fascinating people that have walked through its doors and few have been as colorful as Raymond (Ray) Joseph Conway who served as M.I. Chess Director from 1970-1981.

Conway was hired by Charles Bagby as Chess Director, and he was definitely the right man at the right time. The Mechanics’ Chess Club was more of a rough-and-tumble place in the early 1970s and Conway was not only a well-educated and cultured man who spoke several languages, but a formidable physical presence with some resemblance to W.C. Fields. Old-timers at the M.I. remember Conway was always formally attired. A black shirt and vest were his trademarks, as was a gun secured in a shoulder holster. The latter became a part of Conway’s person after he was mugged outside the Mechanics’ building in the early 1970s.

Packing heat in the Club was not the only thing that made Conway unique among the persons who have served as Chess Director since the establishment of the position in the early 1950s. He fit in well with the lunch-time professionals who frequented the Club in the 1970s and could often be seen smoking his trademark cigar. Conway’s big red nose was a signal that he was not an enemy of the bottle, and the Chess Director’ office was well-stocked during his time at the Mechanics’.

Conway lived in a San Francisco that was much different than today. Imagine someone in 2015 with two apartments—one to live in and another for their library. They would have to be very wealthy indeed. Conway wasn’t, but he did have two apartments for exactly this reason—times were different!

A chess player of some distinction (class A to maybe low expert), Conway has the distinction of having introduced the Tuesday Night Marathon, which is still going strong more than forty years later. It serves as a fitting memorial to Conway, who died on February 21, 1995, and is buried at Holly Cross Cemetery in Colma (row 32 grave 2).

3) An interview with Grandmaster Parimarjan Negi, by Irene Hsu

Grandmaster Parimarjan Negi, who led India to a bronze medal at the 2014 Olympiad and is rated in the top 100 players in the world, is a student at Stanford. He is the author of several outstanding opening books.

The following is a brief excerpt from the an interview he gave The Stanford Daily (TSD) which can be found at http://www.stanforddaily.com/2014/09/24/qa-with-a-freshmen-chess-grandmaster/.

TSD: You said you didn’t like it as much—could you elaborate on that?

PN: Something can be a hobby, but once you’re doing it professionally, often you lose that kind of excitement about chess. You’re trying to do such small things to improve slightly, that don’t seem to have any significance. Every point suddenly seems so important and life-changing, but when I took a step back and looked at what I was doing over the last few years, it was the same thing over and over again: one better performance, one slightly bad performance. They had such importance to me, but I don’t think it was really changing me. Playing chess felt a little bit disconnected from reality. There’s a completely different world out there than those squares. You get too absorbed, and you forget there’s a real world with real things going on. I wanted to be more of a part of that, to look at other parts and other interests.

TSD: Can you elaborate on that?

PN: Chess is basically a war game, and that’s how it’s been structured. Every move is a decision. Often you make a mistake, but you have to go on so the mistake doesn’t affect you, so you can continue doing well. Not everyone is able to recover from those mistakes. I wouldn’t say chess helps in areas of the most common sense, but it can help you make a decision without worrying about every consequence, because you realize most of the decisions we make have alternatives, for better or worse. We have to make the best out of the current situation. For example, I decided to continue with studies instead of with chess. It’s hard to quantify the decision and analyze it, like this is the monetary value or expense I get, or this is what happens after four years, but that was a decision I made partly on intuition. Now I try to make the best out of this decision, rather than think about what it could have been.

4) A letter from John Hilbert about Walter Browne

The following material comes from the noted chess historian John Hilbert, the world’s greatest expert on American chess from 1850 to 1950. He writes:

Knowing your interest in Walter Browne, I attach a game played in the 1972 (6th) New York City championship, held at the McAlpin Hotel in NYC, against Ariel Mengarini. In looking over some other materials from Ariel Mengarini’s scores, I happened on it and thought you might like to see it. I didn’t see the game listed in the index to the 1972 Chess Life & Review, although the tournament itself was advertised in the April 1972 issue, at page 261. I also didn’t find the game in Browne’s game collection.

Mengarini finished 0–3 against Browne in 1972, including his loss in round 7 in that August’s US Open, held in Atlantic City, NJ. Mengarini was hardly a weak player, though. He had, in the same tournament, just the round before, drawn with Arnold Denker. And in round five he had beaten some fellow named Bent Larsen (Browne also beat Larsen that year, winning the US Open with 10½–1½. Browne also wrote that “Larsen was about 25 minutes late for every game and used only about one hour in each, which partly explains his poor performance.” CL&R, 1972, p.623. See full tournament crosstable, CL&R, 1972, p.674). The 1972 US Open games are in ChessBase, but this NYC championship game is not. 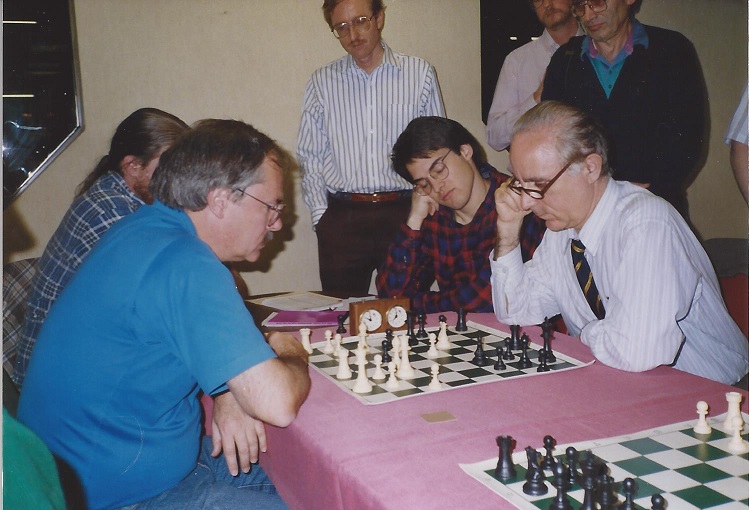 This event is named in honor of McKinley Williams, President Emeritus of Contra Costa College. Mr. Williams was very supportive of chess initiatives in the local area because he knew the educational impact of the game on students. Mr. Easterling was a mentor to young men and women in the city of Richmond who wanted to learn the game. His legacy lives on in the many chess players who were first exposed to the game by him.

Details are below. You can register by email or phone.

The next move is yours.

The following is a position from a game of GM Larry Evans. White is fighting for a draw. Can you help him? 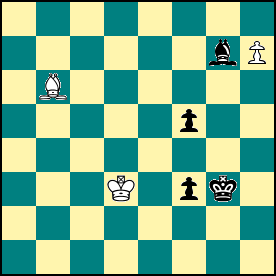 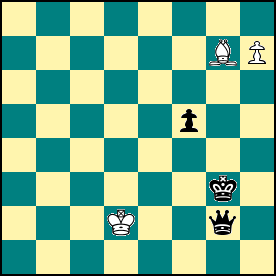 In this position, there is only one move that will save the draw. White, Evans’ opponent, did not find it, and the game concluded 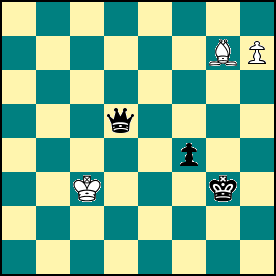 Black finished him off with 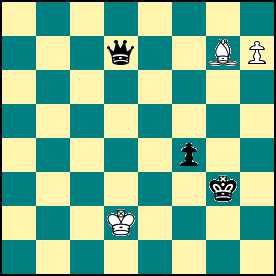 But what could have happened is 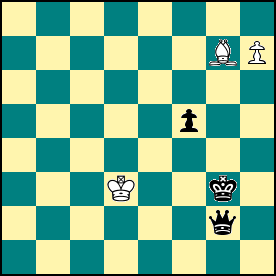 Black to move (analysis, after 4 Kd3)

Now Black has nothing better than to follow the old saw, “Always check—it might be mate.” But alas, 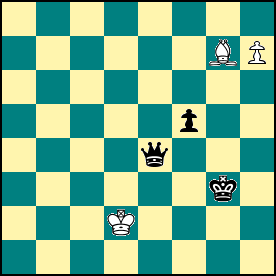 Black to move (analysis, after 6 Kd2) 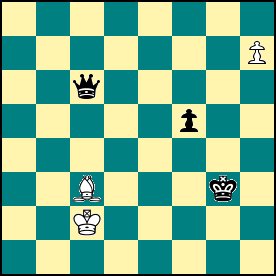 Black to move (analysis, after 8 Bc3)

White could also have drawn from the initial position by 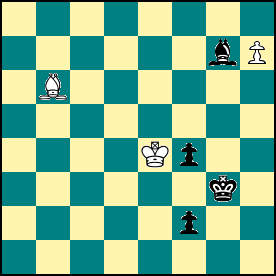 This ending, from the game Blohm–Evans, from the Strawberry Open (Washington), 1969, appears in Larry Evans’ 1970 book Chess Catechism. The problem position was 15 moves after an adjournment, in which Evans had sealed a move that gave White the opportunity to draw.