International Master William Addison, who knew Fischer very well, said. “There were two things about Fischer at the board. He was absolutely honest and would never cheat.”

This is what Addison said. “I played him thousands of speed games, I watched him play people all over the country and he’d get like a knight and a bishop and his opponent might have a queen and a pawn, on the rare occasions he got in trouble, and Fischer would just flip over his king in a five minute game and I’d tell Bobby, ‘Look, Bobby, I don’t care what the position is, I don’t care if you’re a rook down, keep playing, if you’ve got two bishops and the other guy has a queen, he’s not going to be able to beat you, even though it’s a win for the queen. Go ahead and play it, you’ll still win on time, you’ll still beat him.’ And Fischer just threw the chess pieces in the center of the board and said, ‘If I can’t win it clean, I don’t want to win it.’ At the board he would die before he would cheat. No one, ever, ever, for one moment, caught Fischer in anything that wasn’t strictly class at the board.”

—As related by Jude Acers in “The Man in the Red Beret”, part 2 at http://gbitchspot.com/classactionfilms/?p=5.

Elliott Winslow is the only perfect score at the mid-way point of the Winter Tuesday Night Marathon. The 63-year-old International Master got to 4–0 by defeating National Master Tenzing Shaw in a sharp, tense struggle in round four, which can be found in the games section at http://chessclub.org. The Winter TNM continues to grow, and currently has 127 participants, the all-time MI Chess Club attendance record.

This past Sunday over 100 people came to the Mechanics’ Institute to share their memories of the late Steve Brandwein. Among those attending were Steve’s younger brother Russell and his wife Mary Sue, his college roommate Steve Kellerman, Mechanics’ Executive Directors past and present (Jim Flack and Ralph Lewin), MI Trustee Mark Pinto, Three-time U.S. Champion Grandmaster Nick de Firmian, Matt Gonzalez, the chief attorney of the SF Public Defenders Office, and Andrew McKinley the owner of Adobe Books. The last was Steve’s last roommate, and master of ceremonies for the event, which ran from noon to 5 pm. Go to http://www.chessdryad.com/ to see close to 150 wonderful photos taken by Richard Shorman at the event.

Just a reminder: there will be a blitz every Wednesday night from now until April. Sign-up is at 6:30; round one is at 6:40 pm. Late entries accepted.

Last week (January 13) there were 8 players; the results were

Sam Shankland won the 2nd Ghinggis Invitational held in Burlingame from January 19–23. The Orinda Grandmaster scored an undefeated 7 from 9 to win the Grandmaster round-robin, which featured an average rating of 2549 FIDE. Tying for second in the event with 6½ points were Timur Gareev and Andrey Stukopin, followed by Yaroslav Zerebukh and Alejandro Ramirez on 5.

15-year-old Senior Master Cameron Wheeler of Cupertino has won the 2016 Falconer Award. Rated 2426 on the December 2015 USCF list, he just nudged out International Master Kesav Viswanadha, who was 2423. Vignesh Panchanatham was right behind them at 2395.

This award, named after the late Neil Falconer, is given to the top-rated player in Northern California under age 18. The prize is equal to winner’s rating ($2426). A list of previous winners is pretty impressive, as several have gone on to become Grandmasters.

An award ceremony will be held at 5 pm on Tuesday, February 2 and all are welcome to attend. 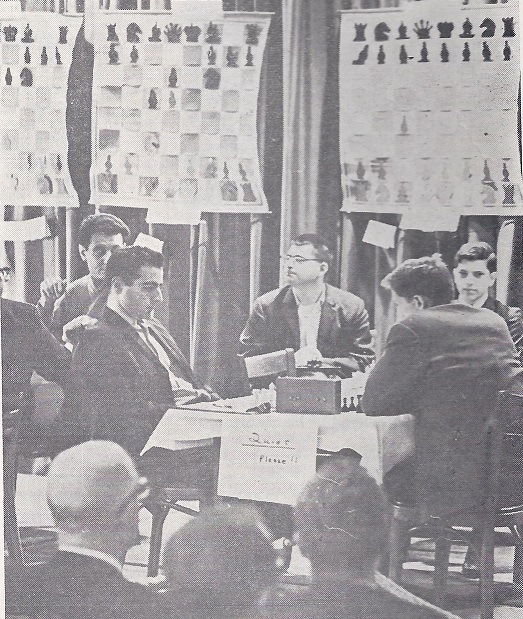 I met Steve Brandwein during July 1983 at the Game Room on Manhattan, and I spent many nights for roughly one week playing late-night blitz sessions with him. I remember that the games were extremely interesting and that Steve had a very distinctive and dynamic playing style combined with an almost encyclopedic knowledge of 1950’s and 1960’s chess opening theory, particularly games from the Soviet Championships. Steve was an exceptionally strong player, very modest, and knowledgeable about a wide range of subjects—the type of guy that you meet and after 30 minutes it seems like you have been friends with him for your whole life. I’m sorry that our paths never crossed again, but Steve made a very favorable impression on me and I was glad to have met him. Rest In Peace, Steve. 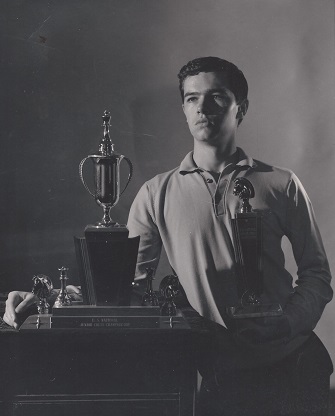 At $100 for three hours Walter Browne must be one of the highest-paid workers around.

“Nah, just three hours of boredom,” said Mr. Browne as he groaned about having to bother playing simultaneous chess with people who can’t play the game as well as he.

The organizers would have been horrified to hear his honesty.

He’d just finished a simultaneous series against 30 players at Grace Bros in Sydney.

The score—Browne 28, the rest 2—were no real indication.

“The two were blunders, not real losses,” he said. “Nobody outplayed me. Chess is nothing for me unless I am playing someone at least as good as me.”

Surely the people playing in the store hoped to day to be that good?

“Well, they’ll never get there playing simultaneous,” he said.

“They have to study and study and practice hours and hours.

“It starts as a gift but you have work on it hard.”

At 22, Mr. Browne is the second-youngest of the world’s best five chess players.

He was born in Australia but as a child his parents took him to live in New York.

“I’m Australian all right,” he said. “But I’d like to live in San Francisco or Scandinavia.

“This tour I’m on now is a good thing. There ought to be more sponsorship of chess: more money, more interest.”

Walter Browne did his part to help the show succeed; he even wore a tie in Melbourne.

“I felt I was all aagh,” he said. “Strangled or choked or something.”

With longish hair, red corduroy pants and a snakeskin patterned shirt, he creates a whole new image of chess as he swoops from board to board.

He’s been called the “Nureyev of chess.”

“I can be good at anything I want to do.”

So far he has only wanted to play chess. He left school at 16 because “it was one big drag” and became a chess professional.

“Just now I want to see how far I can go with chess. Then acting and perhaps business. People keep saying I’m going great because I’m 22: if I gone into business instead of chess I’d have a lot more money.”

Former M.I. Chess Club member International Jeremy Silman writes: “there is a great article by Batgirl (Sarah Cohen) on Herman Steiner which can be found at https://www.chess.com/article/view/hollywood-herman.

The New Yorker ran a short piece on Fabiano Caruana in its January 4, 2016, issue:

Paul Stagnoli writes about the two annual tournaments held each year in Santa Rosa. Here is the tournament schedule for 2016.

The format is still the same (4 round Swiss, G/120 d5).
A $10 fee will be charged for playing up a section.
I post tournament information at http://pstagnol.users.sonic.net.

Andy Ansel sends in the following creative effort by the late Igor Ivanov, who sacrifices his queen for two minor pieces and a couple of pawns.

This study requires careful play on both sides. It seems White is winning, but how should he proceed? 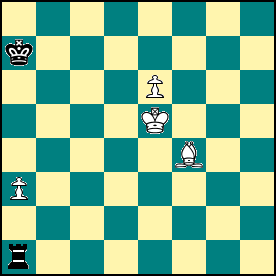 White begins by repositioning the bishop. Any other move draws. 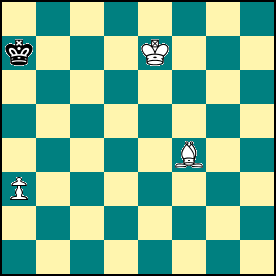 Black to move (analysis, after 3 Kxe7) 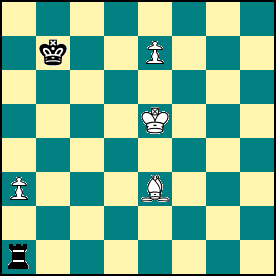 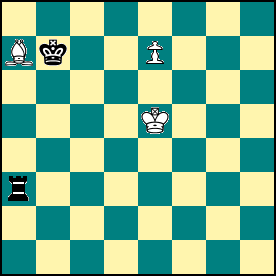 The point of White’s move is that it blocks the a-file, so the black rook cannot reach a8 to capture the nascent queen. It is the only move that wins for White.

Needless to say, the bishop cannot be captured. And, if you considered 3 ... Re3+, remember that bishops move both ways. 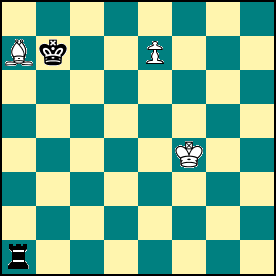 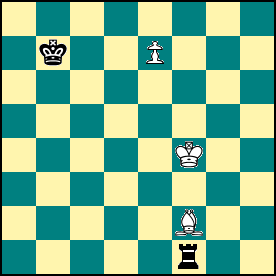 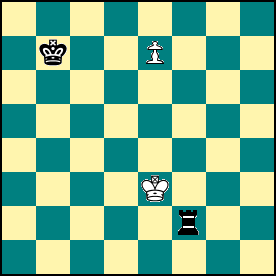 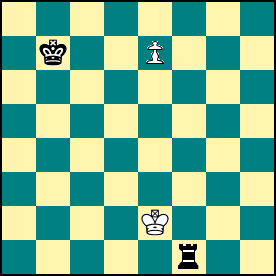 This ingenious study was published by the Latvian master and composer Hermanis Matisons (aka Herman Mattison; 1894–1932) in 1914.