"If you’ve ever thought all politicians were crazy, spare a thought for us poor old chess players: our illustrious leader, Kirsan Ilyumzhinov, not only believes in aliens, he’s met them. He once described on prime-time Russian TV how he was abducted by space aliens and taken on a whistle-stop tour of the galaxy on their spaceship, as you do. Now, a further controversy could well jeopardize a dream world-title match in America for Magnus Carlsen.”

Last week there were 7 players; the results were

We reported in a previous Newsletter that the late Steve Brandwein retired from tournament play in 1965 or early 1966. This is almost true, and would be completely accurate if we had added the words “in the United States”. While Steve never played another U.S.C.F. event after the mid-1960s, he did in fact did play one more tournament in France at the end of 1970.

Steve was in Paris at the time and was a last-minute replacement in the 2nd Memorial for Madame Le Bey Taillis. The ten-player round robin was held at the Cercle Caïssa in Montmartre and organized by Ms. Chantal Silans, who had taken over the running of the club after the death of Jeanne Le Bey Taillis.

Andy Ansel has tracked down the report on the event in the February 1971 issue of the French magazine Europe Echecs, where on page 12 there is a report with crosstable that gives the final standings.

All players were representing France except Ostojić (Yugoslavia), Ducrest (Switzerland) and Steve, whose score was a bit unusual. He lost to Ostojić, drew Todorcevic (then representing France and a future GM) and then scored 3 from 3 against the remaining players who scored 50 percent or more.

1) On principle, avoid playing dubious openings! To make them work one has to sacrifice too much energy, which will be badly missed during the game.

2) If you are, nevertheless intent on playing such an opening, then analyze it very carefully, as I did in this case. But this is not enough: in addition it is essential to thoroughly memorize all the analysis before the tournament, so as to have a clear mind during the games.

3) If, in spite of all your efforts, you feel before the start of the game that you will not remember everything then it is better to play another line from your repertoire. You should make this choice without any guilt, as I believe you will immediately feel relieved and have much more appetite to play a good game.

4) If, during the game, you forget what you thought you knew perfectly, then stop trying to remember, even stop trying to calculate. The first thing you should ask is: What is the most harmonious move in the position?

5) To remember the lines better, use verbal explanations in the notes and add punctuation signs only in crucial positions that are worthy of being assigned as memory markers. This is the toughest part of memorizing, as these positions must be very carefully selected.

In 1977 he easily defeated a computer at the Massachusetts Institute of Technology (3–0), and he crushed his teacher Collins in a training match (+16 –1 =3).

No source is given for the match with Collins and we have never seen the information reported elsewhere. Can any reader confirm this?

As to the computer match there are several unanswered background questions. Namely exactly when was it played? Who initiated contact and did Bobby play from LA (Cal Tech maybe!?) or did he go to Boston? Was he paid to play?

Besides the games, all we know is that Fischer mentioned the program in his Boys Life column in the late 1960s and gave a game played by it. Also that MacHack (also known as The Greenblatt Chess Program or MacHac) was a computer chess program written by Richard Greenblatt. Can any reader offer more information?

The FIDE World Chess Candidates Tournament 2016 will take place in Moscow’s digital hub, the DI Telegraph space in the historic Central Telegraph building from March 11 to 29, 2016. Eight of the world’s top grandmasters will compete for a chance to face the reigning World Champion, Magnus Carlsen, later this year. The €420,000 prize fund is also at stake. Tashir Group is the general partner of the Tournament.

The Candidates Tournament, considered one of the most important and grueling in the sport, will be played over 14 rounds and will feature GMs from six countries: Sergey Karjakin and Peter Svidler (Russia), Hikaru Nakamura and Fabiano Caruana (USA), Viswanathan Anand (India), Veselin Topalov (Bulgaria), Levon Aronian (Armenia) and Anish Giri (Netherlands).

The event is organized by Agon Limited, owner of the WORLD CHESS brand, as well as the owner of commercial rights to the FIDE Chess Championship cycle. The tournament’s general partner is Tashir Group, Russia’s largest diversified industrial holding, as well as one of the largest developers in the country. The event is also supported by the Russian Chess Federation.

The choice of the Central Telegraph building, Moscow’s digital hub that is home to many of Russia’s tech start-ups, as the tournament venue is indicative of the organizers’ ambitions for the World Chess Championship cycle events and plans for taking chess digital, enriching the experience of tens of millions of people who follow the game online.

5) Her Turn: Revolutionary Women of Chess

The World Chess Hall of Fame in St. Louis, Missouri, has just opened a new exhibit.

Her Turn: Revolutionary Women of Chess curated by Assistant Curator Emily Allred, celebrates the legacies of many of the game's greatest female players. Highlights from the collection of the World Chess Hall of Fame and loans from the John G. White Chess Collection at the Cleveland Public Library and private collections provide insight into the careers of U.S. and World Women's Chess Champions, writers, organizers, and other trailblazing women.

An accompanying installation of artifacts related to the 2009–2015 U.S. Women’s Chess Championships curated by Research Assistant Catherine Niehaus will be on view at the Chess Club and Scholastic Center of Saint Louis.

For more information go to http://www.worldchesshof.org/exhibitions/exhibit/her-turn-revolutionary-women-of-chess/.

In this position from a tournament game, White is threatening to promote. Can Black stop him? 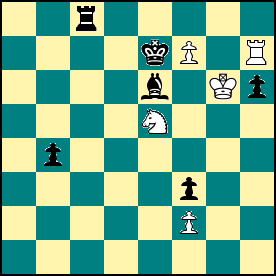 White, the world champion, starts by promoting with a double check. But you can bet he knew what he was doing. 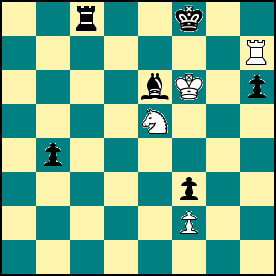 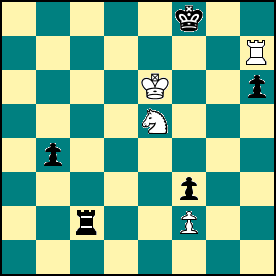 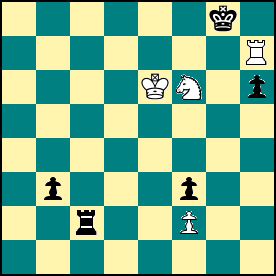 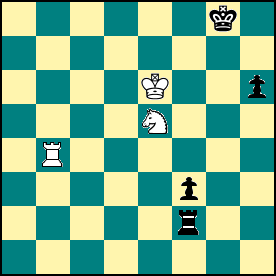 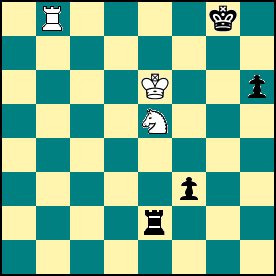 Back to the game: 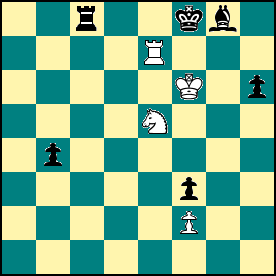 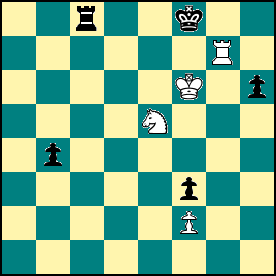 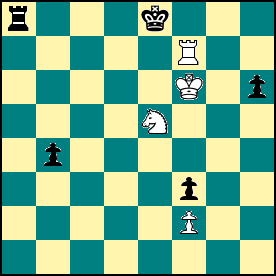 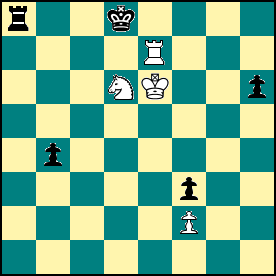 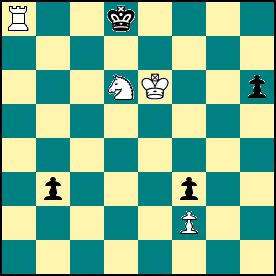