Nowadays, I feel that analyzing a won game may even be more important than the game itself. I now recall with appreciation the lengthy analysis of Dr. Hubner in Chess Informant, realizing why, boring as they looked in the complete absence of any exclamation marks, they were constantly reproaching mistakes rather than praising his good moves or those of his opponent. If you want to reach a high-level you cannot be superficial, you must scrutinize. 0n the other hand, even if we disregard the competitive approach, it is always nice to search for the absolute truth and a chessboard is one of the few places in life where you can be sure of finding it.

Action is heating up in the 131-player Winter Tuesday Night Marathon. Six players are tied for first at 5–1: FIDE Master James Critelli, National Masters Natalya Tsodikova, Josiah Stearman and Tenzing Shaw and Experts Joe Tracy and Michael Askin. Right behind them at 4½ points is a pack of nine players led by International Master Elliott Winslow. The players are shooting for a TNM-record $850 first place.

Last week there were 7 players; the results were

Hikaru Nakamura won the 2016 Tradewise Gibraltar Masters, defeating Maxime Vachier -Lagrave in a playoff after the two ended up tied at 8–2. Former M.I. member Grandmaster James Tarjan won the top over-60 prize ($1500!) for his 6–4 score. 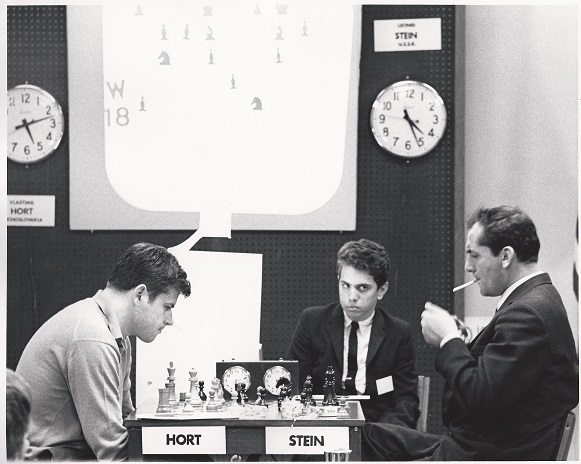 The Mechanics’ Institute Chess Room will host a battle of tech teams on Thursday evening, February 18 from 7 to 9 pm (time control is G/55 plus 5-second delay).

Chessplayers from Salesforce, Square, Arista and Looksharp may also be participating. Spectators are welcome.

2) A Chess Poem from Dennis Fritzinger

when rip van winkle
awoke
from his long sleep,
the world he knew
was different.
i hadn’t played
serious chess
in twenty years;
much had happened
in that time.
i was rip van winkle.
my inner chessboard
was overgrown with weeds.
even seeing where
the squares were
was a burden.
my armies
i dispatched
for the most part blindly.
i needed a
clear view
and i wasn’t getting
a clear view.
finally
the milling around
cleaned off most
of the squares,
and i was able to play
a decent game
or three.
remembering how
the pieces move?
no problem.
or the pawns?
ditto.
the real problem
was the board.

This was the first of a series of USCF/FIDE rated events that the BCC plans to hold, a most welcome development for East Bay players who normally have to travel to the South Bay or San Francisco. Unfortunately the chosen dates undoubtedly had an adverse effect on attendance as there were four tournaments going on simultaneously. Two were important scholastic events which had normal turnouts, but the Bay Area Chess tournament in Milpitas, directed by Tom and Jordan Langland, was also negatively impacted by the many choices, as it only attracted 57 players. This event was won by International Master Ricardo De Guzman with a score of 4½ from 5 including a last-round draw with Grandmaster Oliver Barbosa. National Master Teemu Virtanen was second with 4 points and Barbosa was among those tied for 3rd with 3½.

Veteran chess players think of the 1970s and 1980s as the golden age of Bay Area Chess, when the area was full of active Grandmasters and International Masters. While it was indeed a special period and Berkeley-based players finished =1st (John Grefe), 3rd (Walter Browne) and 4th (James Tarjan) in the 1973 U.S. Championship, by any objective criteria the Bay Area chess has never been stronger than it is now.

Check out the following list of the top ten players with their USCF and FIDE ratings on the respective January 2016 rating lists.

National Master James McCormick of Seattle, a seven-time Washington State chess champion, turns 80 this year. He is looking for the complete score of his win over Grandmaster Larry Evans played in the first round of Lone Pine 1971. A fragment is given in Grefe and Waterman’s book about the Lone Pine tournaments; it starts in the late middle game, so most of the moves are missing. Can a reader help? If so please e-mail the score to [email protected]. 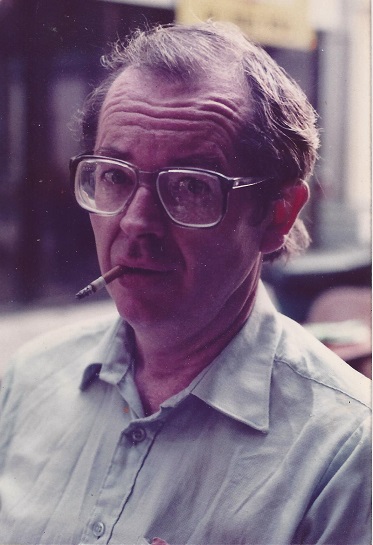 Frank Berry of Stillwater, Oklahoma, the driving force behind the 2007 and 2008 U.S. Championships, passes along the following quotes from Emory Tate (1958–2015) during a 2006 San Diego lecture the late International Master gave.

“When it comes to tactics I have no equal.”

“I don’t pay attention to Fritz’s suggestions... it’s only a machine.”

“I am one of very few strong players who doesn’t book up against a particular opponent before a game..... that is... why even get involved in an opening line that my opponent is comfortable with and plays all the time... I want to get away from that right away.”

The prestigious annual Susan Polgar National Open Championship for Girls and Boys was created in 2006 and is sponsored by the SPF to give more opportunities to young chess players in the United States. The top player of each championship section in the SPFNO will be awarded:

Go to http://www.spfno.com/ for more information.

In this study, White has absolutely no chance to win, so he is playing for a draw. All he needs to do is capture the pawn, and stay out of the corner (two knights cannot force mate, but can give mate if the enemy king is trapped in a corner). 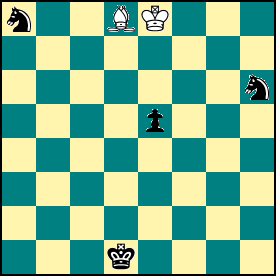 An important theme of this study is the inactivity of the black knight on a8. White can immobilize it by placing his king on c6, and even capture it by moving Kc6-c7. But his bishop has to guard the pawn, and Black will try to prevent this by covering all the squares on the key diagonals with his king and knight (or knights, if he can free Na8).

White can easily go wrong right at the start: 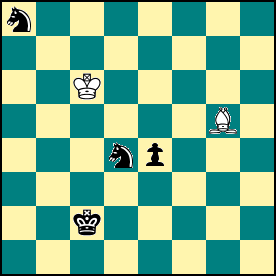 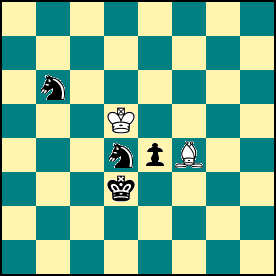 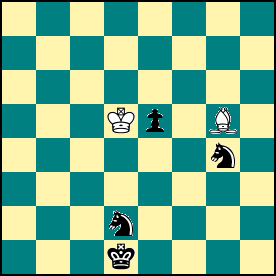 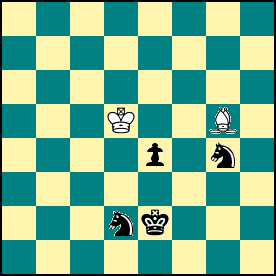 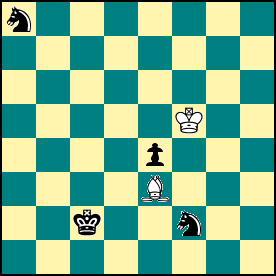 Black to move (analysis, after 5 Be3) 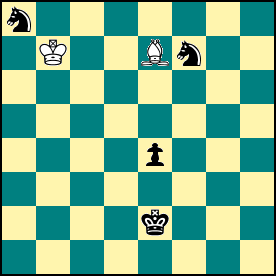 Black to move (analysis, after 4 Be7) 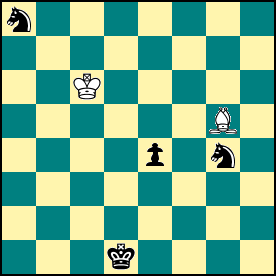 Black to move (analysis, after 3 Bg5) 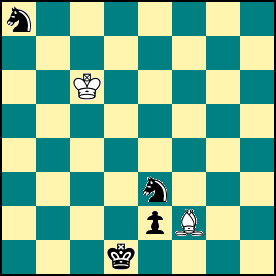 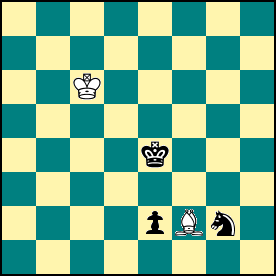 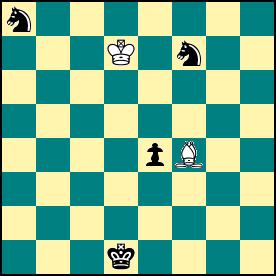 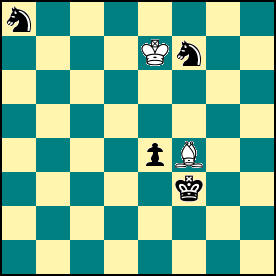 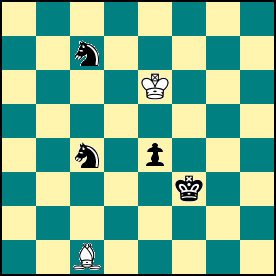 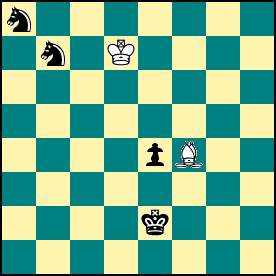 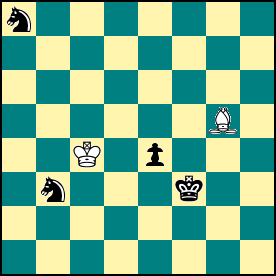 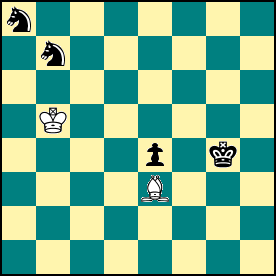 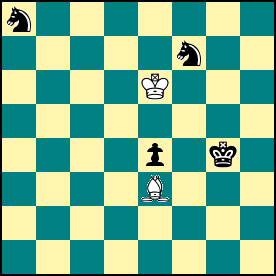 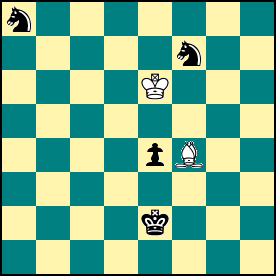 This study by the renowned composer Genrikh Kasparyan won first prize in a 1965 FIDE competition. This is the 1969 version.