—David Navara, when asked on Chess24.com how he keeps calm after a loss.

The 16th Max Wilkerson G/45 will be held this Saturday at the M.I. Chess Club.

Sam Shankland (2648 FIDE), who will be playing in the US Championship this April, gave an excellent lecture this past Tuesday, right before the start of the Spring Tuesday Night Marathon.

This edition of the TNM features International Master Elliott Winslow and National Master Tenzing Shaw, who has played very well in the past few TNMs and is now only 8 points from reaching 2300 USCF. It is still possible to play in the 8-round TNM with a half-point bye for the first round.

From round 1 of the Spring Tuesday Night Marathon:

Congratulations to 15-year-old Ashritha Eswaran of San Jose, who had a brilliant result in the American Women’s Continental Championship, held the second half of February in Lima, Peru. Rated 15th (out of 38 players) going into the event, Ashritha scored 6½ from 9 to take third. The event was won by Peruvian star Deysi Cori (2430 FIDE). You can read reports by her coach Bulgarian GM Dejan Bojkov at http://en.chessbase.com/post/lima-a-place-to-visit.

Back in Mechanics’ Institute Chess Club Newsletter #489 we printed the following information about a match between the young upcoming star Herman Steiner and the Mechanics’ standard-bearer, the world-class problemist A.J. Fink.

John Blackstone sends in the following game from the match between Herman Steiner and A.J. Fink held at the Mechanics’ Institute in May of 1930. Steiner won the planned three-game match 2–0.

Recently we uncovered the first game, which was an epic encounter, with the advantage swinging back and forth several times.

The May 11, 1930 San Francisco Chronicle column of E.J. Clarke reports Steiner was in SF for a week as a guest of the MI and had just left to return back to NYC. Clarke included both games of the match, including the missing game one.

Notes are by the Newsletter Editor.

Now White has counterplay against the d5 pawn.

Now Black is on top again!

36...Nd7 was even stronger activating the knight.

44...Nd7 brings the knight into the game while stopping White’s f5–f6 advance.

White is back in the driver’s seat.

A picture of the two masters playing game two hangs on the wall of the Chess Room Annex. Here is what the slightly water-damaged photo looks like: 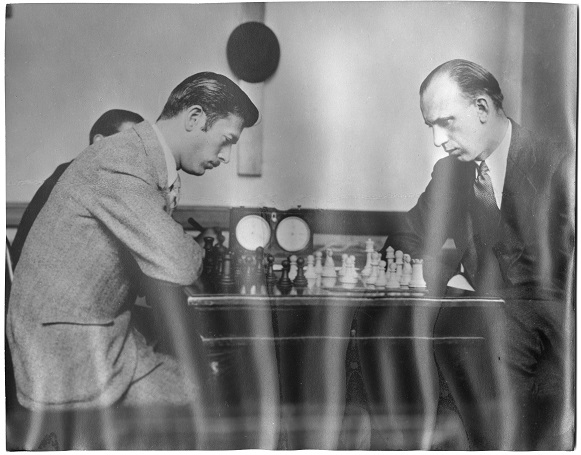 The Frank P. Samford, Jr. Chess Fellowship, marking its thirtieth annual award, has selected Grandmaster Wesley So of Minnetonka Minnesota, as its 2016 Fellow. The Samford is the richest and most important chess fellowship in the United States having awarded over two million dollars the past three decades. It identifies and assists the best young American chess masters by providing top-level coaching, strong competition and access to study materials. The Fellowship also supplies a monthly stipend for living expenses so that the winners may devote themselves to chess without having financial worries. The total value of the Fellowship has been increased several times over the years and is now $42,000 annually. The prize is awarded for one year and can be renewed for a second year. The winners’ term begins July 1, 2016.

22-year-old Wesley So is currently the 10th-rated player in the world at 2773 on the March 2016 FIDE rating list. He won the Bilbao Masters last fall ahead of Anish Giri, Viswanathan Anand and Ding Liren and tied for second in the Tata Steel tournament held earlier in 2015. So also won the inaugural Millionaire Open in October 2014.

The Samford Chess Fellowship was created by the late Frank P. Samford, Jr. of Birmingham Alabama. Mr. Samford was a distinguished attorney and CEO of Liberty National Life Insurance Company (now Torchmark). He was active in civic, business, political, educational and cultural affairs. Mr. Samford was also an enthusiastic competitor in chess tournaments. After providing financial support for several chess projects he decided to do something significant for American chess. The result was the Samford Fellowship.

Since its inception the Fellowship has proven very successful. Many Samford Fellows have become strong Grandmasters, members of the United States Olympiad team and US Champions.  Hikaru Nakamura, currently rated number five in the world, is a former Samford Fellow.

Generous contributions from the late Mrs. Virginia Samford and the Torchmark Corporation support the Fellowship. The Samford Fellowship is a fitting memorial to an extraordinary man. The dedication, creativity and achievement that marked Mr. Frank P. Samford, Jr.’s life are examples for all chess players to admire and emulate.

This position is taken from a 1975 game. It is said that all rook endings are drawn. Is this one? 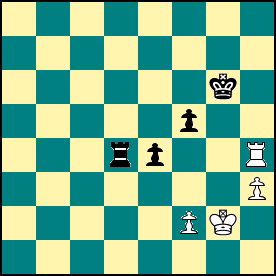 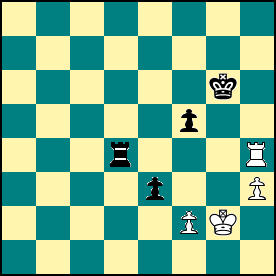 Can this be right? Black is dropping a rook? 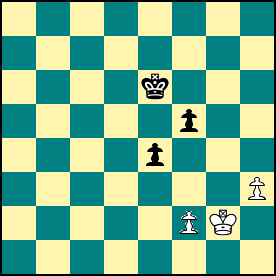 Let’s see what happens if White avoids taking the rook: 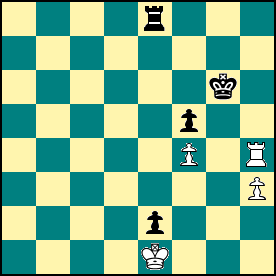 Therefore, White has to accept the sacrifice 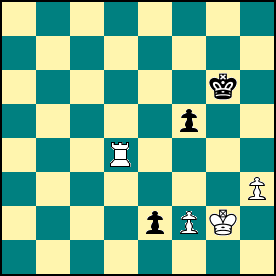 White figures he’ll let Black promote, but trade his rook for the queen So, 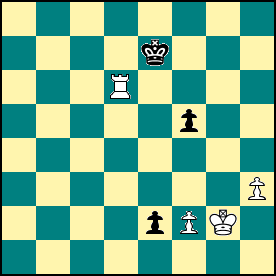 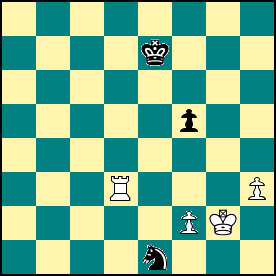 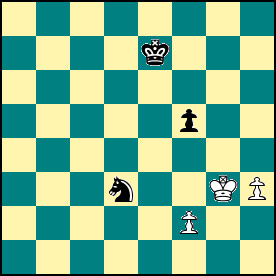 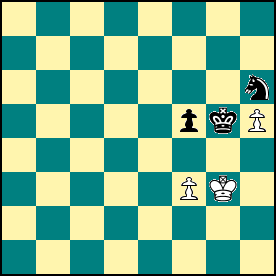 White miscalculated at move 6 He could have drawn with 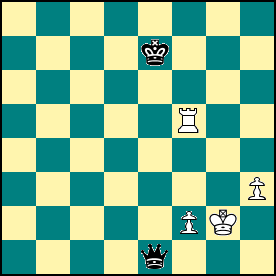 Black to move (analysis, after 7 Rxf5)

The position is from Galić–Vukčević, Yugoslavia, 1975. The analysis is from Yuri Averbach’s Chess Tactics for Advanced Players.