There are people who are always optimistic. You should force yourself to be optimistic, but I don’t know how to do it. I try to be realistic, but sometimes I realize that it would be better for me if I were a bit more optimistic. …Quite often it is a matter of understanding. A guy doesn’t understand that he is worse and this helps him play much better. A strange phenomenon.

—Vladimir Kramnik, interviewed in New in Chess, No.3/1996

There were upsets galore in the first round of the 119-player Spring Tuesday Night Marathon, with Robert Frank, Jerry Simpkins and Daniel Weingarten collecting the scalps of players rated over five hundred points higher than they were. Round two saw fewer upsets, but Kevin Walters and Patrick Donnelly both defeated opponents rated significantly higher.

Top seeds in the eight-round event (half-point byes are available for the first two rounds for those who still wish to enter) are FIDE Master James Critelli, International Master Elliott Winslow and 2292 USCF rated Tenzing Shaw.

Max Wilkerson served as Mechanics’ Institute Chess Director from 1980 to 1996, golden years for the M.I.C.C. Among the highlights during Max’s tour of duty were the 1987, 1991 and 1995 Pan Pacific Internationals, which included players like Mikhail Tal and Viktor Korchnoi. 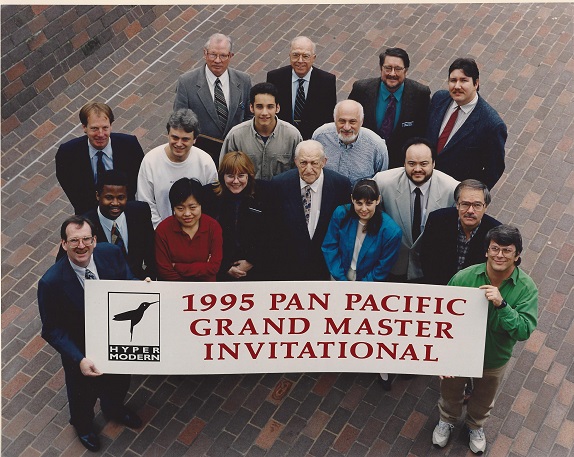 Max Wilkerson is in the back row on left (Photo: unknown)

A strong Expert, Max was the champion of Colorado in 1954 and New Mexico in 1959. We wrote about his some of his great tournament successes in Newsletter #480, but didn’t mention that he traded wins with Bobby Fischer during the latter’s 1964 Transcontinental Simul Tour.

Here is Max’s win during Bobby’s simul at the Mechanics’ Institute.

Interestingly the two had met previous to 1964. Max, who was born in Texas in 1923 (some sources say 1925), earned a Master’s in Fine Arts in Mexico in the early 1950s, and soon after receiving his degree moved to New York City to further his development. There he not only explored his artistic aspirations but also played chess. 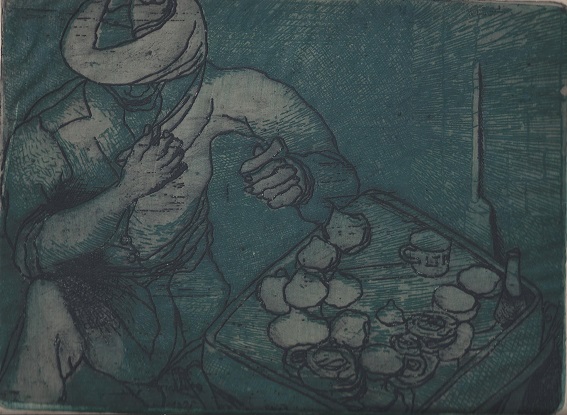 Max told me one of his sparring partners at the Manhattan Chess Club was a young Bobby Fischer. Many have told such a story, but Max was not exaggerating. Proof of this surfaced a few years ago when Bobby’s brother-in-law Russell Targ donated Fischer family archives to the Marshall Chess Club.

Among the items that Regina Fischer entrusted to her daughter Joan and son-in-law Russell, when she began her march from San Francisco to Moscow in 1961, was a collection of approximately 100 Fischer scoresheets from roughly 1955 to 1959. About half are carbon scoresheets from major tournaments and offer nothing new, but the others are pure gold—unpublished Fischer games. The Newsletter editor was privileged to be shown these games, and among them were several between 12-year-old Bobby and Max! One hopes that one day these scores will be made public.

Bay Area Grandmasters are doing well in the Fagernes International in Norway. Sam Shankland is tied for first at 4–1 and Mechanics’ Grandmaster-in-Residence Nick deFirmian has 3 points, good for a 2534-FIDE performance. Go to http://fagerneschess2016.blogspot.com/ to follow the none-round Grandmaster section. Tuesday Night Marathon regular Ralph Palmeri, rated 1646 FIDE, has 2½ out of 5 against a field averaging 1791.

2) A Chess Poem by Dennis Fritzinger

You can learn more about National Master Dennis Fritzinger’s poetry and life in an interview he gave to UC Berkeley News, which can be found at: http://www.berkeley.edu/news/berkeleyan/2006/11/01_veterans.shtml.

Here is his latest poem with a chess theme.

a bishop may rule
and a bishop may rock,
but you still have to make
your move, punch the clock,
establish for all
to see, your credential,
but the knight
has cheapo potential.
the way that it gallops
from hither to yon
has inspired troubadours
to sing in the dawn,
all of whom agree
that in things existential,
the knight has
cheapo potential.
so my horse i’ll maneuver
from black square to white,
let him boldly ride into
the thick of the fight.
then from white square to black
he’ll lead the attack,
and from that moment on
there’ll be no turning back.
chess kingdoms may rise,
then certainly fall,
as with my faithful knight
i conquer them all.
in war, as in love,
a knight is essential,
because of its
cheapo potential.

3) Chess and Baseball, by John McCrary

William R. Wheaton was a pioneer in the birth of modern baseball, as well as organized chess. He may also be the first documented umpire.

In A Game of Inches (by Peter Morris; published by Ivan R. Dee, Chicago, 2010 edition) pp. 21–22, the entry on the history of umpires gives Wheaton as the first name listed. After briefly referencing the Olympic Ball Club of Philadelphia (which played town ball, a baseball variant, in 1838) the entry reads: "The Knickerbockers’ rules outlined a similar role for the umpire. William R. Wheaton officiated during a game of October 6, 1845, that appears in the club’s scorebooks". It then adds that Wheaton was one of three umpires in a game between the New York Ball Club and the Brooklyn Club on October 23, 1845.

Wheaton came to San Francisco in 1849 in search of gold like so many others, but soon resumed practicing law. In 1855, the Pioneer Chess Club was formed in the City, and Wheaton served as its first Vice President. In October 1857, four members on the “Committee of Cooperation” of the First American Chess Congress, held in New York City, were from California. These members were T. B. Baillie, Selim Franklin, T. J. Grotjan, and William R. Wheaton.

In this complex study, Black seems to have an overwhelming advantage, but White can save himself. How? 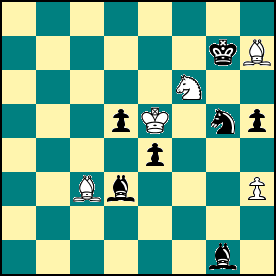 White to move and draw 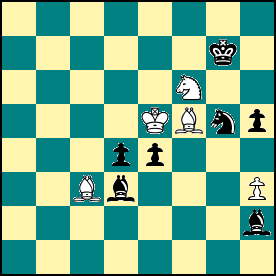 The other possibilities are losing: 2 Bxe4? Bxe4 3 Nxe4 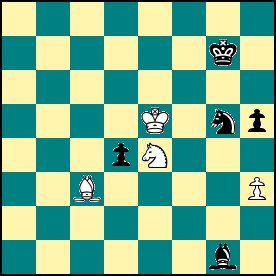 Black to move (analysis after 3 Nxe4) 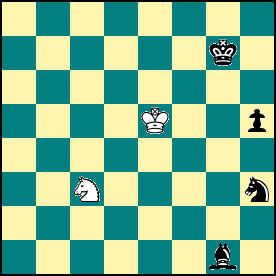 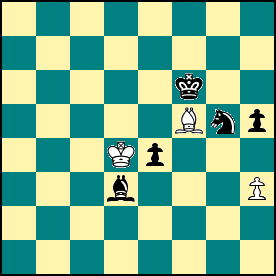 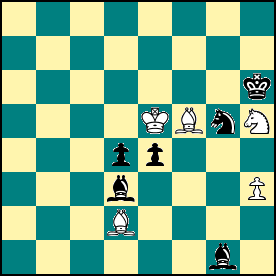 White cannot afford to lose the dark-squared bishop. Note that 3 Bxd4? loses the bishop to a knight fork 3 ... Nf3+. 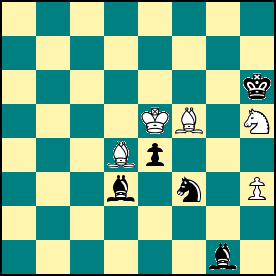 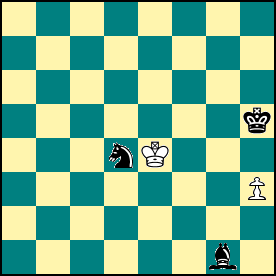 White will lose the h-pawn, and Black will mate with the bishop and knight. 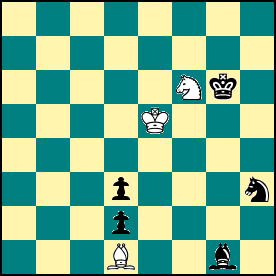 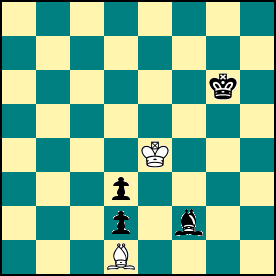 Black to move (analysis after 10 Ke4) 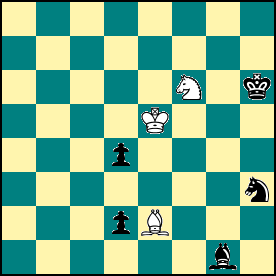 Black to move (analysis after 6 Nf6!) 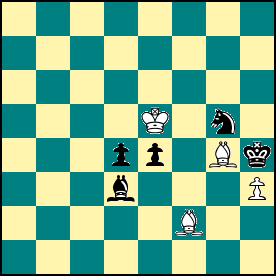 Black to move (analysis after 6 Bxf2) 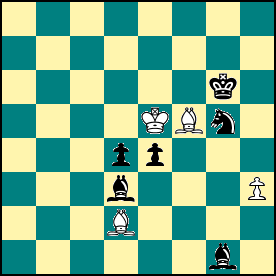 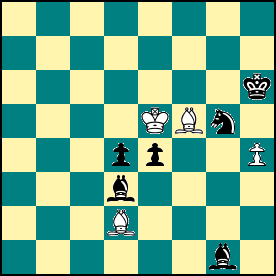 Black to move (analysis after 6 h4) 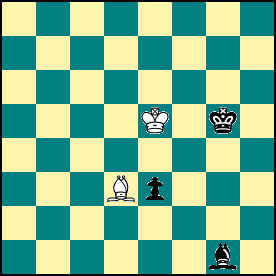 Black to move (analysis after 9 Bxd3) 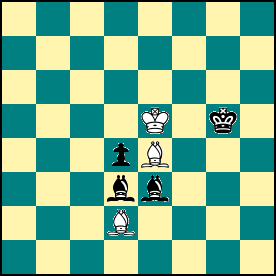 Black to move (analysis after 8 Bxe4)

Black isn’t getting anywhere, so now 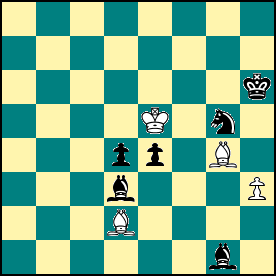 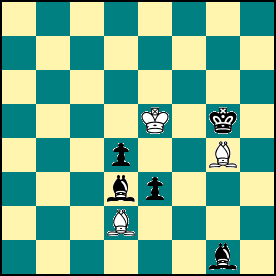 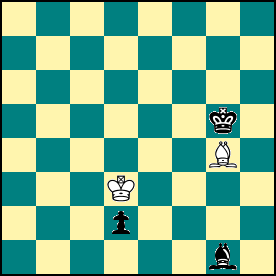 Black to move (analysis after 10 Kxd3) 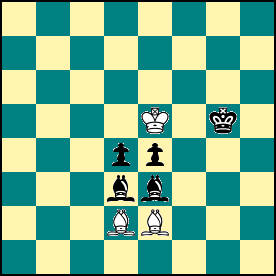 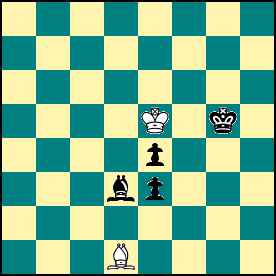 Black to move (analysis after 10 Bd1) 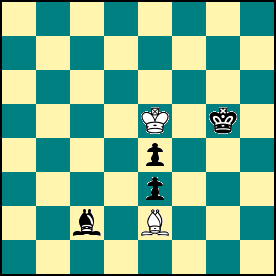 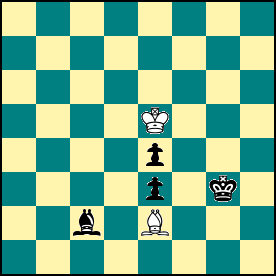 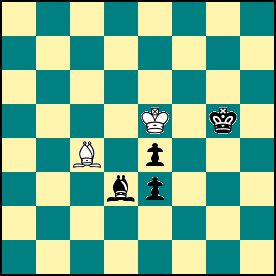 Now we have reached the grand finale.

Black can capture either white bishop, but 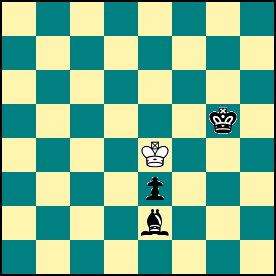 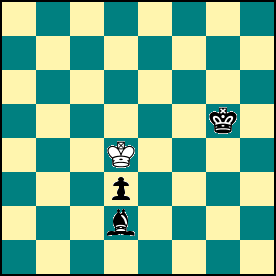 This beautiful study by Oleg Pervakov and Karen Sumbatyan won second prize in the Dobrescu 80 JT 2014 competition, and was chosen as study of the year 2014 by the web site arves.org, where this analysis http://www.arves.org/arves/index.php/endgamestudies/studyoftheyear/study-of-the-year-2014_appears in English and Russian.)