It is said that long diagonal moves backward are easily overlooked…It is also said that the rule does not apply to long central diagonals.

The 16th Annual Imre Konig Memorial will be held this Saturday (April 9) at the M.I.C.C.

International Master Elliott Winslow, top-seeded FIDE Master James Critelli and National Master Natalya Tsodikova are tied for first at the half-way point of the Spring Tuesday Night Marathon with 4–0 scores. A half-point behind the leaders is a large group, headed by National Masters Tenzing Shaw and Josiah Stearman. The tournament has attracted 126 players to date, the second-best attendance for a Mechanics’ Chess Club event in its history. With four rounds remaining there is an outside chance that the event will pass the all-time record of 132 players held by the 2016 Winter Tuesday Night Marathon. 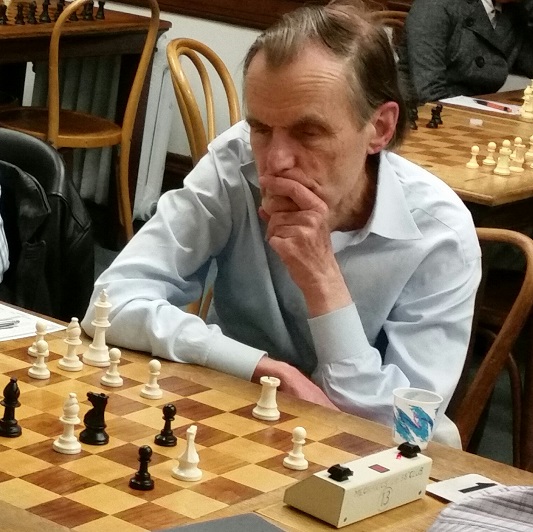 This photo was from the last TNM—round one on January 5—taken by Armen Boldi, whose son Ethan was playing Peter that round.

An obituary will appear in an upcoming newsletter

The weekend attendance record is held by Stamer Memorials held during and immediately after the Fischer boom.

These events might have attracted even more entries if not for a self-imposed limit on the number of players.

Arthur Ismakov won the March 30 edition of the Wednesday Night Blitz with a perfect score of 12–0. Jules Jelinek was a distant second with 8, followed by Felix Rudyak with 6½. Eight players competed in the six double-round Swiss.

The Wednesday Night Blitz is held every week from 6:30 p.m. to 9:30 p.m. under the direction of Jules Jelinek, with the following exceptions:

There will be a Wednesday Night Blitz on April 6. Then a break, followed by the Blitz continuing on May 11, May 18, May 25, June 1, and June 9. Then the Blitz will take its normal summer break and resume on August 31.

The California Women’s State Championship was won in convincing fashion by Uyanga Byambaa with a 5–0 score. Uyanga not only won the $700 first prize, but regained her National Master title. Her key win was in the last round over top seed National Master Natalya Tsodikova. Lauren Goodkind was second with 4 points, followed by Jessica Lausser at 3½. Bryon Doyle directed the 22-player event, held at the Hillside School in Berkeley on April 2–3. The organizer and visionary for this welcome new addition to the Bay Area chess calendar was Elizabeth Shaughnessy, who also sponsored this event along with FIDE Master James Eade.

The 41-player Berkeley Weekender held March 11-13 at the Hillside School in Berkeley was a tournament full of surprises. 12-year-old Josiah Stearman won the event with a score of 4½ from 5, raising his USCF. rating to a personal best of 2231. Fellow National Master, Marin high school student Ladia Jirasek was second at 4, losing only to Josiah in round 2. The surprise of the event? That was the appearance of World top 100 player Grandmaster Parimarjan Negi. Currently a student at Stanford, Negi played one round, drawing with Expert Joshua Cao.

International Master Elliott Winslow, who turns 64 on May 16, won the Berkeley Chess Club’s Humphrey Bogart Marathon held in January and February with a score of 5½ from 6, including a win over the top seed, FIDE Master Roger Poehlmann. The latter was second with 5 points and Tom Maser was third with 4½. Maser defeated 12-year-old National Master Josiah Stearman. The event was organized by Elizabeth Shaughnessy and directed by National Master Kerry Lawless.

Players will be honored in Saint Louis on April 13, 2016, just before start of the 2016 US Championship and US Women’s Championship.

“Ashley and Kamsky have both made a tremendous impact on the chess world. Both highly accomplished players, Ashley has broadened the visibility of chess among key audiences, and Kamsky has demonstrated the unique ability to sustain a high caliber of play over more than three decades. We are thrilled to celebrate these elite players,” Harold Winston, U.S. Chess Trust Chairman, said.

Each player is commemorated at the World Chess Hall of Fame in Saint Louis, Missouri with a plaque bearing his image and a biography of his notable contributions to the game.

“The 2016 induction ceremony will recognize these important players of our time, their tremendous chess careers and their undeniable influence on the game,” Shannon Bailey, chief curator of the World Chess Hall of Fame in Saint Louis, said.

The following game, which appears in the Fischer/Bjelica book Chess Meets of the Century, is the last that Bobby annotated with words. The last game he annotated (with symbols) was Fischer–Browne, Zagreb/Rovinj 1970, for Chess Informant.

More often seen is 4.c4. I played an old variation in order to avoid well-known variations.

The second possibility would be 6...g6.

After the game Petrosian recommended 9...a6.

Defending 11…Bb5, with which Black would solve the problem of his bishop. With this move White gets a clear advantage as he has overturned Black’s strategy.

Black has a passive position. With his last move he hopes to mobilize his pieces to the kingside.

In this position, where I expected Petrosian to resign, he finds an ingenious defense trying to escape with his king to the queenside.

Black is in a difficult position.

The US Chess Championship starts April 14 in St. Louis. The 12-player field, which includes the big three of Fabiano Caruana, Hikaru Nakamura and Wesley So and Bay Area standard-bearer Sam Shankland, will compete for a record $294,000 prize fund. Go to http://www.uschesschamps.com/2016-us-championship/information/overview to learn more.

6) Chess on TV and in the Movies

Chess is popping up all the time on TV and in the movies.

1. Magnus—this Norwegian documentary about the current world champion will debut at the Tribeca Film Festival in New York in April. For more information go to http://en.chessbase.com/post/magnus-the-chess-movie.

2. The Dark Horse—this movie from New Zealand has been out since 2014 but is only now getting a theatrical run in the United States. It has received good reviews. Here is some information about the movie from the distributor.

The Dark Horse is based on the true story of Genesis ‘Gen’ Potini (Cliff Curtis), a Maori speed-chess champion seeking redemption and a new purpose in life despite his struggles with bipolar disorder. A former chess prodigy, Gen is brilliant and charismatic, bringing unusual, potent energy to a game most often played with quiet reserve.

3. Also from down under and released in 2014 is Son of a Gun, an Australian crime thriller starring Ewan McGregor. There is even a discussion of Fischer’s …Nh5 in the Modern Benoni in this movie.

The Steven King novel turned TV series 11.22.63, about a time traveler (James Franco) trying to stop the J.F.K. assassination, doesn’t have a chess scene per se, but chess players with a key eye will see the character playing Lee Harvey Oswald has a Soviet Jantar (Amber) chess clock he uses to time himself. It’s the white-faced model that was sold in the the West in the early 1970s and there is a decent chance this particular model hadn’t yet been made in the early 1960s when the show is based.

Seems like rooks are everywhere these days; there are three in this study alone. Maybe the most important is the black rook on h4, ready to help the h-pawn. How should White play? 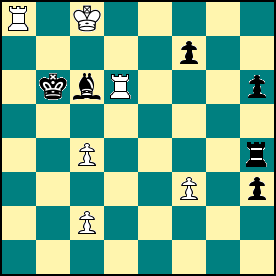 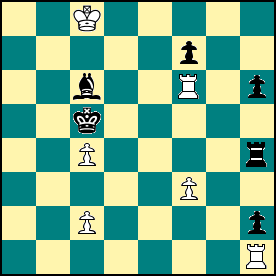 Black to move (analysis, after 3 Rh1) 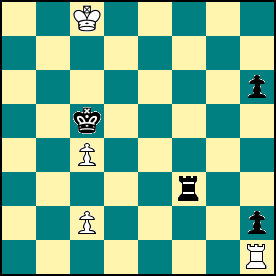 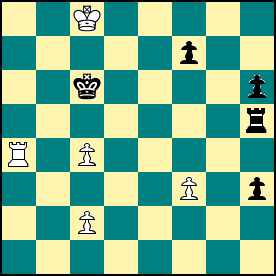 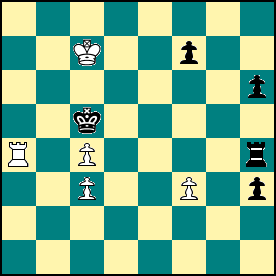 Black to move (analysis, after 4 Kc7)

So Black pushes on with 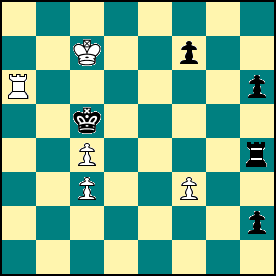 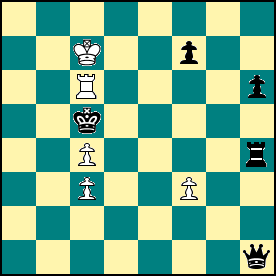 This study was created by the Austrian composer Alois Wotawa (1896–1970) published in Österreichische Schachzeitung, 1953. It is featured on Tim Krabbé’s “Open Chess Diary” as #332, 14 December 2006: http://timkr.home.xs4all.nl/chess2/diary_17.htm, along with other examples of this mate from games.