In general I would like to say that I am a strong believer in the value of a chess education built on a thorough knowledge of the classics. Any attempt to emulate the engines and their 2,000,000 moves a second is doomed to fail. We need to supplement calculation with all other weapons available. And one of these is intuition, which is strongly rooted in pattern recognition. When you have “uploaded” a lot of chess patterns to your brain in your childhood, you will often have a very strong suspicion regarding what the right move is in a position, even though you have no idea why.

—GM Boris Gelfand, on p. 58 of his Positional Decision-Making in Chess

This coming Tuesday the Mechanics’ Chess Club will hold a memorial for long-time member Peter Grey from 4:15 to 6:15 pm.
Light refreshments will be served and testimonials heard. All are welcome to attend.
There will be no lecture before the TNM.

The Summer Tuesday Night Marathon is off to a good start with 97 entries to date. Top seeds are FIDE Master Andy Lee (2390 USCF) and International Master Elliot Winslow (2330 USCF).

The first round of the Summer TNM mostly followed the form charts, but there were a few upsets. The biggest was Elena Kondakova’s win over Iris Kokish. Elena’s brother Adrian is better known among Bay Area chess players as a rising star, but the play of his sister last night was clear indication that she is seriously underrated.

The Summer TNM, which is both USCF and FIDE rated, is an eight-rounder. It is still possible to enter the event with a half-point bye for round one.

Grandmaster Daniel Naroditsky dominated the 10th Ray Schutt Memorial Blitz, scoring 11½ from 12 to finish 2½ points ahead of the 71-player field. Among his victims were Grandmasters Christain Chiriila and Patrick Wolff, and International Master Vladimir Mezentsev.

This event, the strongest (this year featured three Grandmasters and six International Masters) annual stand-alone blitz tournament in the United States, was once again made possible by the generosity of the Schutt family.

A crosstable of the event can be found at http://chessclub.org/archive.php?y=2016&t=club-events&e=x07.Shutt10Standings.

Pictures of the event (taken by Richard Shorman) can be seen at http://www.chessdryad.com/photos/sanfran/schutt2016/index.htm.

2) Around the Bay Area

International Master Elliott Winslow, who turned 64 on May 16, celebrated his birthday a few days later by winning the May Berkeley Weekender in convincing fashion. Winslow won four consecutive games after taking a first round bye, with National Masters Paul Gallegos and Ladia Jirasek among his victims. The 52-player event was organized by Elizabeth O’Shaughnessy and directed by Bryon Doyle for the Berkeley Chess School.

High school student Ladia Jirasek is already the high-rated player in Marin County, with a USCF rating around 2300. He showed why his rating is rapidly improving by winning the 36-player 2016 Frank Doyle Open, held April 23 and 24 in Santa Rosa, with a score of 3½ from 4. Paul Stagnoli organized and directed the event for the Golden Gate Chess Association.

The late Peter Grey was a Mechanics’ member for over 50 years (late 1964 to 2016). During this time Peter made many friends and played close to 2000(!) rated USCF games at the MI. Peter won’t be playing any more games, but his legacy will live on.

Thanks to the generosity of his sisters Lucy and Sarah and the entire extended Grey family, Peter’s considerable chess library has been donated to the Mechanics’ and has already made a major impact. The M.I. library now has complete runs of Chess Informant and New in Chess Yearbook and the bookcases in the Chess Room and Chess Room Annex are bulging with books and magazines for members to use.

Peter has an unusual chess archive in that he collected scoresheets—thousands of them. These were given to him by George Koltanowski, who not only wrote a daily column for the San Francisco Chronicle for over half a century (with Peter providing assistance for many years), but also directed US Opens from the late 1940s to the late 1960s.

Kolti collected the scoresheets for these events, and many of them found their way to the late Jack Spence, who produced spiral bound tournament books/bulletins for most, but not all of them. Chicago 1963, Boston 1964, San Juan 1965 and Seattle 1966 are U.S. Opens that are notable for their lack of bulletins and absence of Spence books devoted to them.

Thanks to Peter’s generosity the scores of Seattle 1966 became available in the early 2000s and now many of the missing games from the 1963–65 US Opens will be preserved, thanks to his efforts.

Even the Spence booklets that were published are missing many interesting games from U.S. Opens. A case in point is the following game played by the noted chess historian, collector and author Robert S. Moore of San Francisco and Alaska. Bob became a strong player while growing up in San Francisco in the 1950s and quickly became one of the best player in Alaska when he moved up there in the late 1950s, becoming the first state champion in 1960.

Moore returned to San Francisco to play in the 1961 U.S. Open, held at the Sheraton Palace Hotel across the street from the Mechanics’. In round 2 he defeated the veteran master Sven Almgren in a very instructive game which is not in Spence’s booklet on the event, but the scoresheet was in Peter Grey’s archive.

4.cxd5 is of course the main line, but the text is also playable. 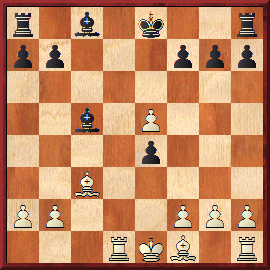 White’s advantage is indisputable, due to his lead in development—but it is impressive how his next three moves lead to a completely winning position.

Simple chess. White paves the way for his rook to reach the seventh rank.

Our Chess Room is the oldest dedicated chess club in the United States and needs new chairs. Many are broken or in poor condition after 80 years of constant use. In order to replace them we need your help.

Thomas Southerland approached me during my April tournament to announce a Grandmaster match between Varuzhan Akobian and Tigran L. Petrosian in Windsor just north of Santa Rosa on Highway 101. The event will be held June 7–10 at the Paradise Ridge Winery. For more information go to http://thomassoutherlandpresents.com/.

This position is from Geller–Averbakh, URS-ch21 Kiev, 1954. White has just played 46 Rb5. How should Black answer this? 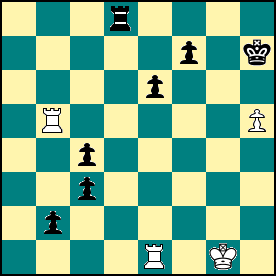 The game didn’t last much longer, because Black played

White resigned because after 47 Rxd1 c2 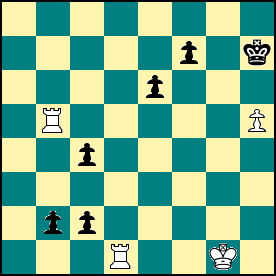 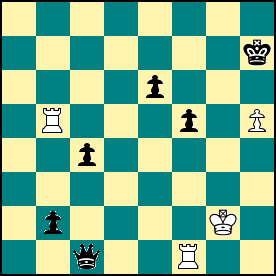 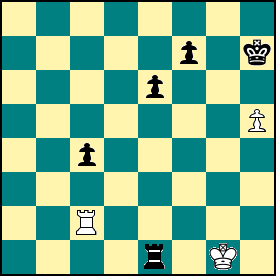