Well, I think if you are in doubt you shouldn’t pursue it. It is only for people who are completely devoted. Of course, if you enjoy it, you can always stay connected to chess through writing or training or other such side activities. The good part about chess is that it is a highly creative field. It is not easy to find another profession which is so creative. If you pursue your academics and get a job, there is high possibility that you would be working in the office day after day. Whether to pursue a career in chess or not depends on personal feeling. It is a very difficult choice to make and everyone has to decide for himself. But to become a chess professional requires huge amount of discipline and devotion to the game.

—Boris Gelfand, answering whether love for the game
is necessary to pursue chess as a career.

Read the second part of Gelfand interviewed by Sagar Shah at http://en.chessbase.com/post/improve-your-chess-with-boris-gelfand-2-2.

International Master Elliott Winslow’s 5–0 score puts him a point ahead of the field in the Summer Tuesday Night Marathon. Among those trailing him on 4–1 are FIDE Master Andy Lee and National Masters Tenzing Shaw,

Tianyi He won the 16th William Addison Memorial G/45 held June 18 with a 4½/5 score. Derek Slater, Ethan Boldi, John Canessa and Aaron Thompson tied for second half a point back in the 34-player event. 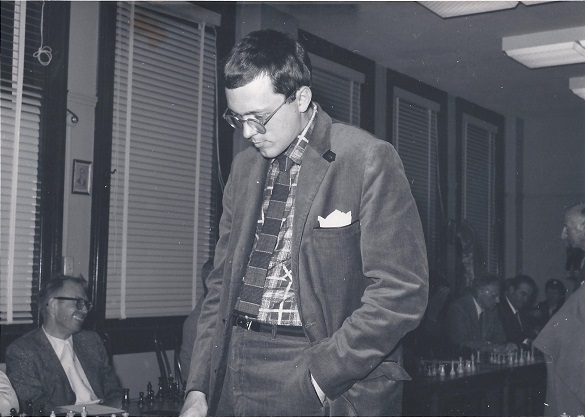 Grandmaster Sam Shankland is off to an excellent start in the Edmonton International Chess Festival. Sam is currently in second in the ten-player round robin with 3½ out of 4, having drawn top seed Alexey Shirov and beaten GM S.P. Sethuraman (2653 FIDE).

Sam’s performance to date puts him back in the FIDE live rating at #98 at 2654. Follow the tournament at http://edmonton-international.com.

Shankland, of Walnut Creek, will play in the 49th Biel Chess Festival from July 23 to August 3.

Three giants of American chess died within a week of each other. Each was a great ambassador for the game they loved.

Mike Klein offers a fine tribute to all three at https://www.chess.com/news/u-s-chess-loses-3-influential-figures-5798

For individual remembrances go to:

3) Norman Mailer on Chess And Boxing

Tuesday Night Marathon regular Craig Andries passes along the following chess reference from Norman Mailer’s The Fight, on the 1974 Ali versus Foreman fight in Zaire, also known as the Rumble in the Jungle.

The following passage comes from Chapter 17

....In chess, no concept had once been more firmly established than control of the center, and for much the same reason as boxing - it gave mobility for attack by the left or the right. Later, a revolution came to chess, and new masters argued that if one occupied the center too early, weaknesses were created as well as strengths. It was better to invade the center after the opponent was committed. Of course with such a strategy you had to be resourceful in a cramped space. Tactical brilliance was essential at every step. Was that not exactly what Ali had accomplished? It was doubtful, however, if many a chess game had been played which equaled in timing Ali’s climatic occupation of the center of the ring.

A short video of Muhammad Ali and Mike Tyson playing chess can be found at https://www.youtube.com/watch?v=CJY8YQKFjfo.

Lajos Portisch gave a simultaneous exhibition in New York at the Manhattan Chess Club on his way home from the 1966 Piatigorsky tournament. Richard Reich provides the following games from the exhibition, where Portisch scored +28 =5 -2.

They were first published in I.A. Horowitz’s column in the New York Times on October 2, 1966.

Portisch’s opponent in the following game is one of the more colorful characters in American chess the past 50 years. Not to be confused with the San Diego master of the same name who was close in age, this Steven Spencer grew up in the New York chess scene of the 1960s. He was a promising junior player participating in the 1968 and 1969 U.S. Junior Closed Championships, and in the latter lost a famous game to Ken Rogoff which was annotated by Bobby Fischer in his Boys Life column.

Spencer was a member of the UC Berkeley team (along with Frank Thornally, Richard Laver, Mike Morris and Sam Sloan) that won the 1967 Pan American Intercollegiate. He attended UC Berkeley (or was in the Bay Area) from roughly 1967 to 1969.

Spencer appears to have played no tournament chess from 1970-73, possibly receiving free room and board from the U.S. government. He reappeared in the Bay Area in 1974 and for the next few years was living on a commune in Willow Springs, Missouri, supporting himself by playing tournaments around the country. Spencer kept expenses down by hitchhiking, crashing on floors and performing surgery on half-eaten pizza using a knife to remove chewed portions left by the previous eater.

Your editor played in a Region V Junior Championship in Bowling Green, Ohio, on Memorial Day weekend in 1976 while Spencer was playing in a concurrent open event, and seeing him in action persuaded me it might be prudent to go to college and have a backup plan before trying to make a living at chess.

International Master Elliott Winslow recalls attending an event in Woodstock, New York, in the summer of 1977 that confirms that by that year Spencer had stop playing chess and become a born-again Christian and insurance salesman. The USCF lists a Steven Spencer of Missouri playing in the 1994 World Open.

In this position from a 2015 tournament, both players misplayed the ending. Can you do better? 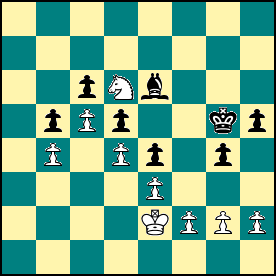 White starts out with a mistake He needs to get the knight into a position where it covers the kingside, for example, 41 Nb7. 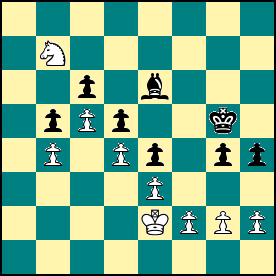 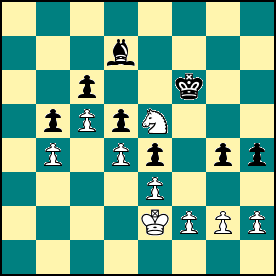 Black to move (analysis after 44 Ne5) 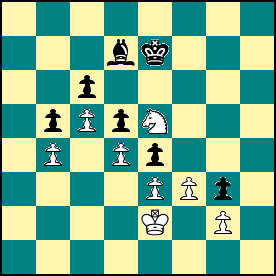 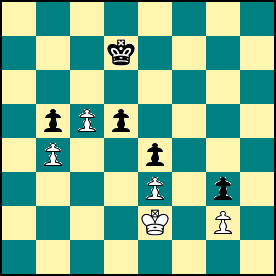 The protected passed pawn on c5 will win for White. 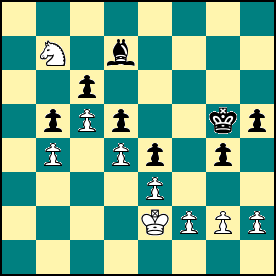 Now that the black king has been diverted from the kingside, 43 f3. 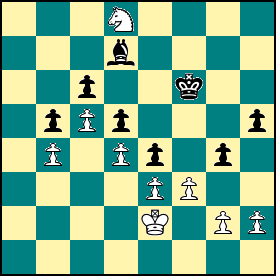 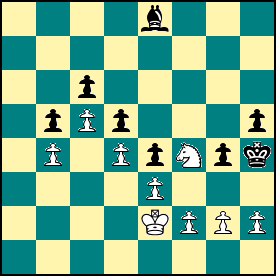 Black to move (analysis after 44 Nf4) 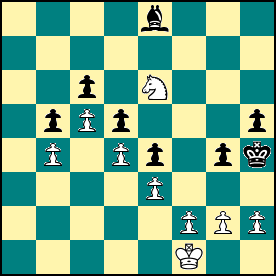 Black to move (analysis after 44 Kf1) 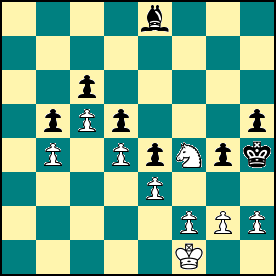 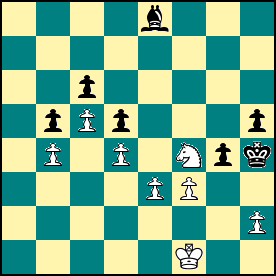 Black to move (analysis after 47 gxf3) 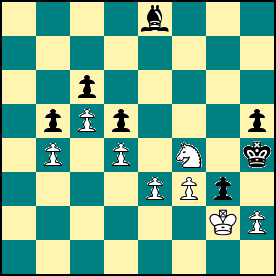 Black to move (analysis after 48 Kg2) 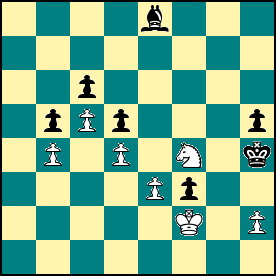 Black to move (analysis after 48 Kf2) 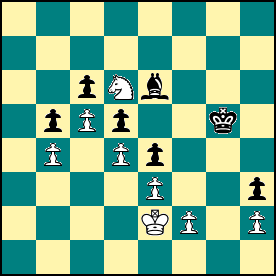 White to move (analysis after h4-h3 and exchange on h3)

After the immediate f3 break, the game went 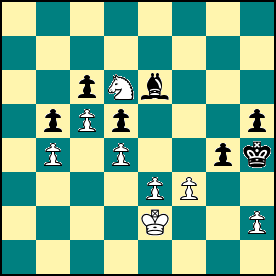 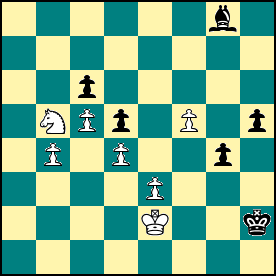 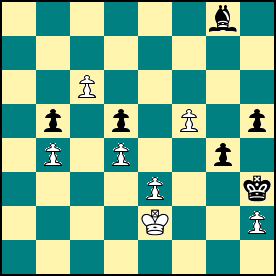 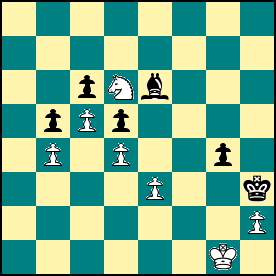 Now the white king in a poor position. 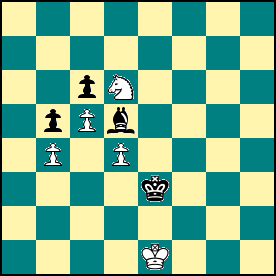 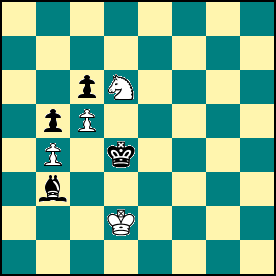 White has to either give up control of c3 by moving his king, or b4 after a knight move. 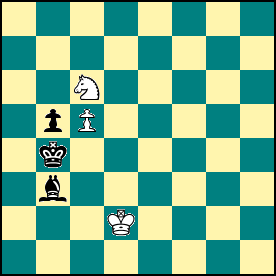 White draws, as he will eventually exchange the knight for the pawn. 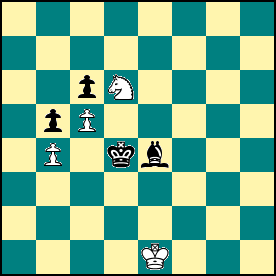 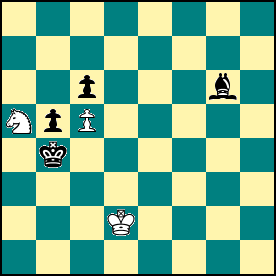 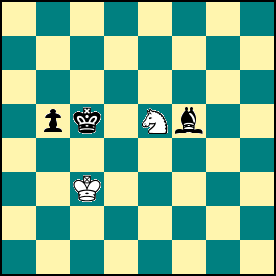 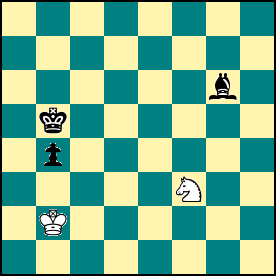 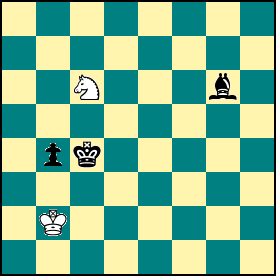 The game was Gerhard Niebergall (2051)–Christoph Soppa (1860),18th Rhein-Main-Open, 2015-6-4, and the analysis is by GM Nicholas Pert. It is an example from his ChessBase DVD Typical mistakes by 1800–2000 players. You can watch the video sample of this example at https://shop.chessbase.com/en/products/pert_typical_mistakes_by_1800_2000_players.