It is a strange feeling preparing for my game today.  My 2500 rated opponent has one grandmaster norm to his credit. I find myself studying his games from the 2015 World Championships … for under twelve year olds.

The 16th Annual Vladimir Pafnutieff Memorial G/45 will be held this Saturday August 6 starting at 10 am.

Most of the higher-rated players won in round one of the Alan Benson Tuesday Night Marathon, but several of the top seeds were in trouble in the middle of their games.

It’s still possible to enter the 9-round, USCF- and FIDE-rated, Alan Benson Tuesday Night Marathon with a half-point bye for round one. The event is named after the Berkeley Master and tournament organizer Alan Benson who died June 10, 2015.

From round 1 of the Alan Benson Tuesday Night Marathon:

A case in point of top seeds in trouble is the following sharp contest between Peter Sherwood and 12-year-old Josiah Stearman (rated 2315 USCF).

Black’s last move is common in the Yugoslav Attack against the Dragon, where it slows down g4 and stops h4–h5, but here it looks premature, as White has not committed to f3. Why not 8.h3, intending f4, with thoughts to play e5. 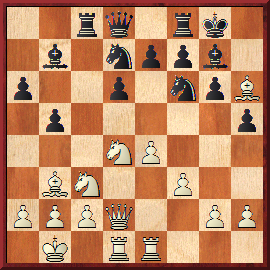 This is not nearly as effective as before, but still gives White some advantage.

What makes this position attractive for White is not only having two pawns and rook for two minor pieces, but the fact that Black is tied down to the defense of his d6 pawn, which makes it harder for him to activate his minor pieces.

This creates a serious weakness on f3.

Congratulations to Grandmaster Sam Shankland who has been red-hot of late, following his victory in the Edmonton International with clear first in the famous Biel Open. Sam’s performance was nothing short of outstanding, as he defeated four strong GMs, averaging over 2600 FIDE, en route to a score of 7½ from 9. This performance brings his FIDE rating to 2679 FIDE, 4th in the United States and 57th in the world. Sam’s next event will be the Chess Olympiad in Baku, which starts September 2.

Grandmasters Daniel Naroditsky and James Tarjan played in the Xtracon Open in Denmark this past July. Naroditsky started the event seeded 8th and that is just where he finished, a half-point behind the winners. His undefeated score of 7½ from 10 maintained his 2646 FIDE rating (#7 in the United States and 7 rating points from number 100 in the world). Tarjan, who calls Portland, Oregon home, nearly made it into the winners’ circle, losing a tough fight in the last round to Alexey Shirov on the black side of a Breyer Ruy Lopez. Naroditsky will soon start play in the Riga Technical University Open.

Josiah Stearman of Martinez has won or tied for first place in the past four Tuesday Night Marathon tournaments. The 12-year-old Master has made tremendous improvement the past six months and is now rated 2316 by the U.S. Chess Federation, making him the third-ranked player for his age in the United States. Josiah has been playing tournament chess since he was five years old.

International Master Greg Shahade’s U.S. Chess School held a session at the MI from July 25–28 that was attended by some of the top young players from California and Texas. 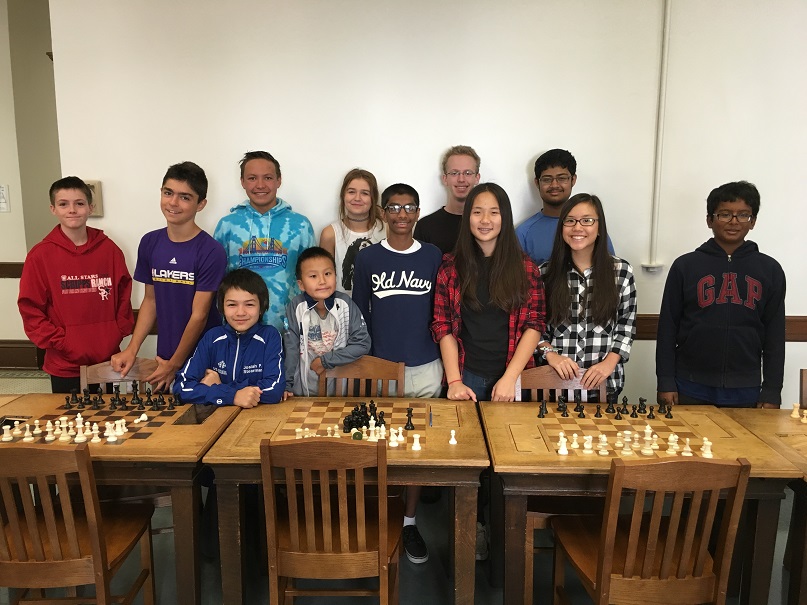 International Master Ricardo De Guzman won the Berkeley Weekender, held July 15–17, in style. The former Filipino Olympiad team member, who has called the Bay Area home the past 15 years, scored 5–0 to finish a point ahead of the field. Among DeGuzman’s victims—while raising his USCF rating from 2401 to 2439—were International Master Ray Kaufmann (back in the Bay Area after a stay in Seattle), IM-elect Vignesh Panchanatham and National Master Josiah Stearman.

Panchanatham, who only needs to raise his FIDE rating to 2400 to receive the IM title, shared second place with National Master Uyanga Byambaa at 4–1. 12-year-old Josiah Stearman was alone in fourth place with 3½ points, raising his rating to 2315.

Recent Cal grad Derek O’Connor continued his meteoric rise of the last two months and is now up to 2094 (from 1851 two months ago). His 3–2 score included a win over International Master Elliott Winslow.

2) A Chess Poem by Dennis Fritzinger

i sit down at the board
to play a child.
i look at him:
i see, with second sight,
a seasoned warrior
with armor and weapons.
if i lose, it will be no shame:
he has slain grandmasters,
and is on the road
to becoming
one himself.

Probably not a good move, though it took me a while to figure out what Mauricio wanted to do, if allowed, which was 11…b5!? Curiously, I had examined the position after my 10th move on the very morning of this tournament as I had obtained it at least four times before without ever gaining a convincing advantage!

Whew! But, this is the kind of research you have to do if you want to really understand how to play the middlegames your openings can lead to.

So, I decided to mimic Zuckerman’s idea of threatening 12. e5, while also preventing 12…b5!?

I didn’t expect this and thought a long time here.

A nice, clean game where I got to use all my pieces, and kept the initiative throughout.

The following game, which comes from the archives of the late Peter Grey, was played in a Mechanics’ rating tournament on August 8, 1969. Time control for the game was 40/2 followed by 20/1. Bourke, who was rated a master at the time this game was played, served as Mechanics’ Chess Director from 1969 to 1971. 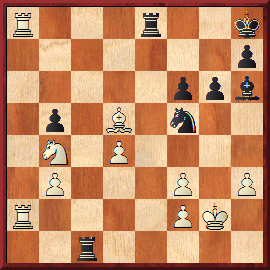 This position from a Grandmaster game features good knight versus bad bishop (“bad” because the four black pawns on light squares hinder the bishop’s movements). 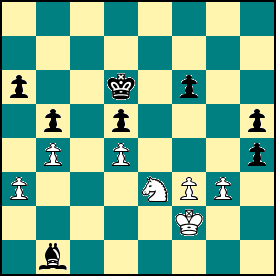 This position is from Karpov–Kasparov, the ninth round of the 31st world championship match (October 1984), reached after 46 b4 gxh4?.

Karpov comments that a White recapture on h4 would lead to a draw, “as the possibility of g3-g4 has vanished, and the f4-square is White’s only entrance to the enemy camp. And White’s king and knight can’t use it at the same time.” 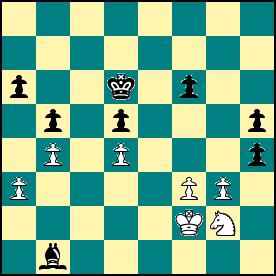 “The surprising knight move [sacrifices] a pawn, but material balance will soon be re-established and the white pieces will penetrate into Black’s position.” Apparently this move was made after an adjourned position was resumed, and Karpov suggests that in Kasparov’s home analysis, the recapture was the only move considered. 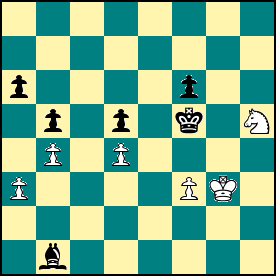 The alternative capture 50 Nxd5 Kg5 looks like a draw: 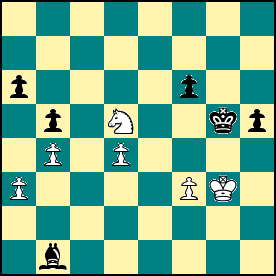 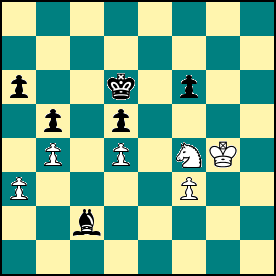 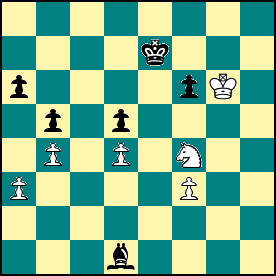 55 ... Kd6 would have been better according to Geller in Informator, but obviously by this stage Black is on the edge (King). 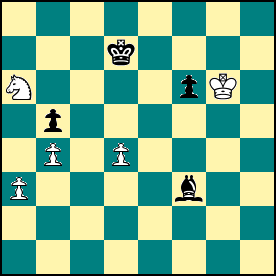 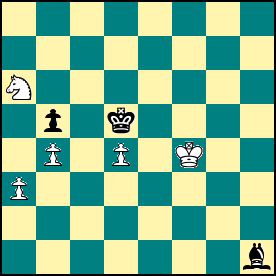 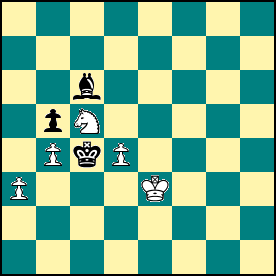 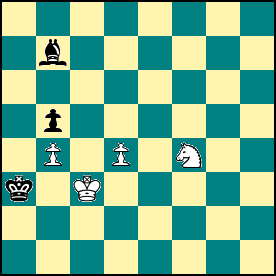 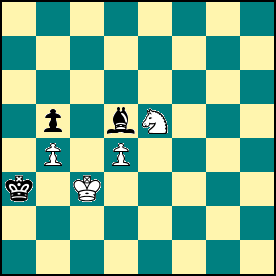 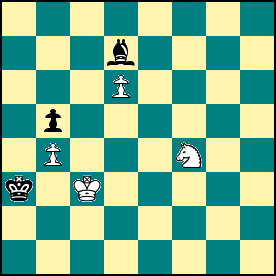 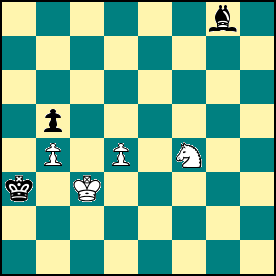 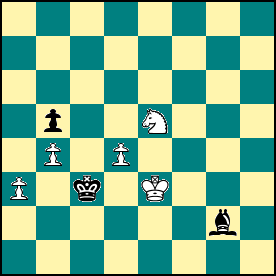 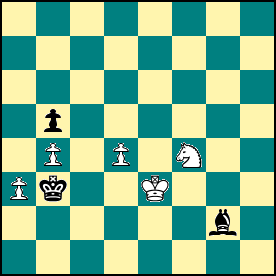 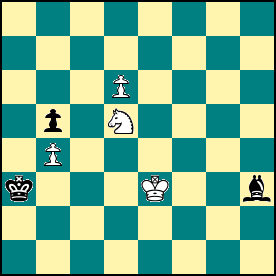 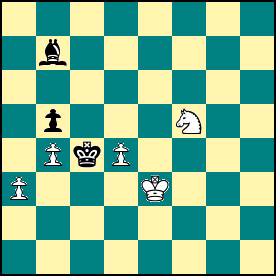 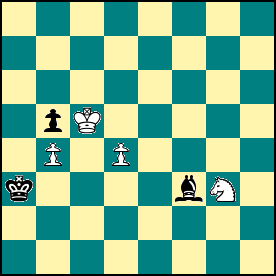 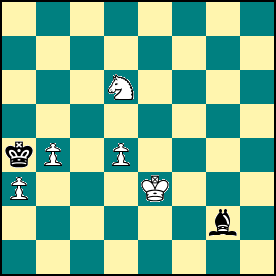 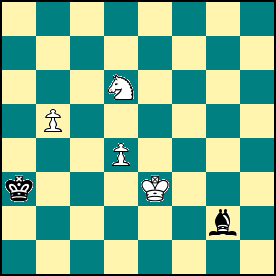 The knight covers both light squares, and the black king can’t catch the b-pawn.

King says “ ... these are my findings: Black ought to be able to draw with 46 ... Bg6, either by sitting tight with 47 ... Ke6 or simplifying with 47 ... gxh4. However, in both cases, great accuracy is required, and in a practical game I would say that the odds of White winning are greater than that of Black drawing. If a (youthful) ‘Kasparov’ can blunder, then so can anyone. One thing is clear, having the pawn on h5 makes life more difficult for Black than if it were on its starting square.

“A very similar ending has been reached to Saidy–Fischer. The differences (apart from the reversal of colours): the defending side’s queenside pawns are fixed and therefore weaker; but the kingside pawns are better placed to prevent White’s king breaking through. They are somewhat as I discussed in Saidy–Fischer with the exception that the h-pawn has advanced—a slight drawback from Black’s point of view.”

The position appears in Karpov’s Endgame Arsenal; the analysis by Daniel King is from Chessbase’s Mega Database 2015.