You are playing chess because you sense something spiritual in it. You have tasted it, but are not really certain what it is. You keep coming back to the game to find it.

Top seed International Master Elliott Winslow is half a point behind, after winning the game below, which features a beautiful finish.

From round 3 of the Alan Benson Tuesday Night Marathon:

Black’s hesitancy finally catches up to him.

Stockfish 7 says 21.Nxg5!+– but my little computer probably didn’t let it see what happened in the game in the time I allowed it to run. 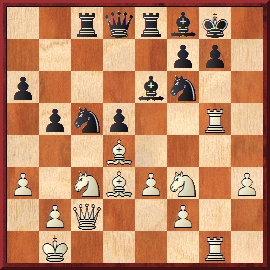 “Can it really be that simple?” (Benjamin Gates—National Treasure). 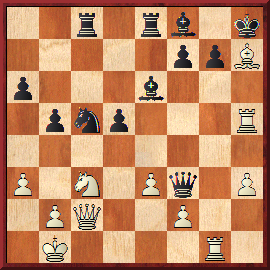 When the computer sees this, its evaluation jumps.

Grandmaster Daniel Naroditsky ended a successful European summer by tying for sixth in the 2016 Riga Technical University Open, half a point out of first. Daniel ends the summer a few points shy of 2650 FIDE; just outside the top-100-rated players in the world.

Alex Shabalov won the U.S. Open held in Indianapolis from July 30 to August 7. The 48-year-old Latvian-born Grandmaster score 8 from 9 to tie for first with Israeli International Master Gil Popilski, whom he defeated in a playoff. Shabalov earned a spot in the 2017 US Championship.

13-year-old Hans Niemann, who began his chess career at the Mechanics’ Institute Chess Club, just earned his first IM norm at the North American Chess Championship under 18 by tying for first. The event was held in Windsor, Canada.

Olimpiu G. Urcan of Singapore found the following game from a 32-board simultaneous display at the Mechanics’ Institute Chess Club.

2) Chess and the Preparedness Day Bombing by John Donaldson

This past July 22 the hundred year anniversary of the Preparedness Day bombing quietly came and went. The largest terrorist act in San Francisco the past century killed 10 people and wounded 40 others when a bomb placed in a suitcase exploded during a huge parade staged to show that the U.S. was prepared to enter World War I.

Juries quickly convicted labor union organizers Tom Mooney and Warren Billings of the crime, but soon after information emerged that they had been sent to prison on perjured testimony and doctored evidence. Despite the new facts Mooney and Billings spent 23 years in prison, only being released in 1939.

During the 1920s and 1930s many attempts were made to free the two men whose case had become a cause célbre. Among those offering legal assistance to the labor union organizers was the young San Francisco attorney and Mechanics’ member Henry Gross who tied for first in the 1928 California State Chess Championship.

The following letter from Warren Billings indicates that he and Gross had something in common besides a desire to see justice served. The first half concerns the legal proceedings of the case in the early 1930s, but the remainder deals exclusively with Billings’s chess activities, which were considerable. The tournaments he mentions participating in were played by mail.

The following game and notes come from the archive of the late Peter Grey.

Black’s defense is unsound. Now White must demonstrate control of the white squares.

Necessary to defend against Qg3 or Bxh6. 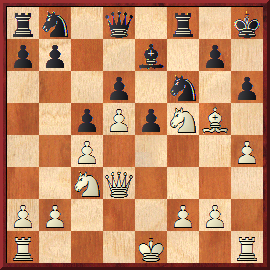 16.cxb5 is objectively best, but White wants a quick finish. 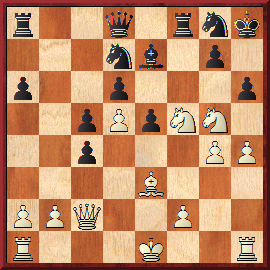 I have heard an opinion that there is so much knowledge nowadays that committing it all to your memory is impossible, so grandmasters have started to turn away from home preparation. They are not exactly without an opening repertoire, but with some kind of a “lite” one.

This is not exactly the case. It is not so much about the opening theory, but simply that Carlsen has advanced to the forefront, and he is the trendsetter in chess at present with people imitating him. In Kasparov’s days, on the contrary, everyone tried to study openings as deeply as possible. Carlsen has demonstrated that you are able to play based on mastery, will to win and other qualities, without having any hardwired opening repertoire. But even now chess players still can’t afford to get by without getting along with openings. Perhaps they do not study a lot of forced variations, but opening preparation takes up a large chunk of their time.

Is it because of that that their performance in the middlegame and endgame suffers?

This is unquestionably so, but not only because there’s almost no time left to work on other stages, but also because of the advent of computers. Chess players receive ready-made answers, while in the past finding answers required having to switch on their brains to full capacity much more often, and thus they were constantly training different skills and decision-making habits. It goes without saying that it would be stupid nowadays not to exploit such a powerful tool as a computer, but you have to be able to combine working with it and training your mind. The most important task of coaches is to help their students come to terms with that process.

The entire interview by Vladimir Barsky can be found at http://ruchess.ru/en/news/report/mark_dvoretsky_chess_players_could_only_benefit_from_avoiding_too_much_study_of_the_opening_theory/.

This position is from a recent Grandmaster game. Black has just played 68 ... Ra8-a5, keeping the a-pawn under control. What happens now? 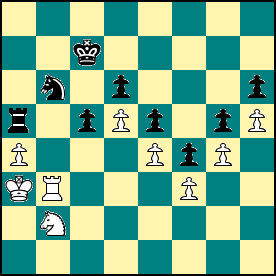 “Now the monster octopus will force a decision” (Mueller). In this case it is the knight playing the part of octopus, appropriate, as a knight has eight moves on an open board. 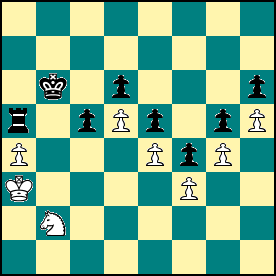 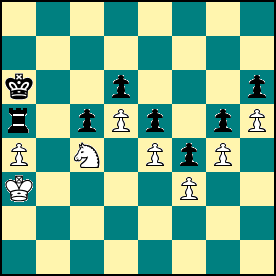 71 Kb3!? “is even simpler, because Black loses the rook immediately on account of the zuzwang” (Mueller). 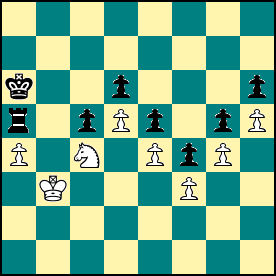 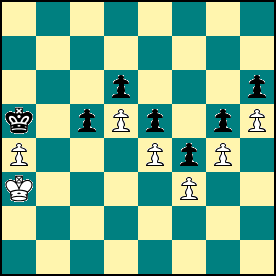 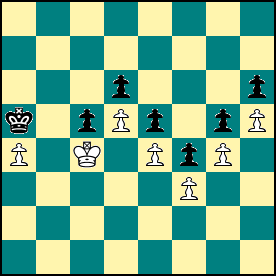 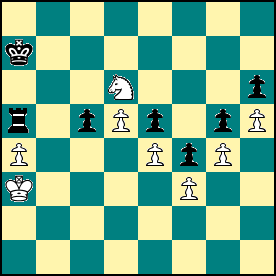 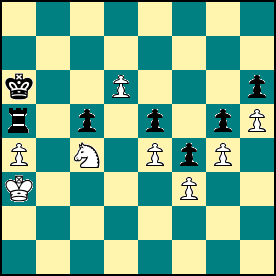 The rook can’t move, and the king can’t abandon the rook.

The e5-pawn will be the next victim, but first, White advances the a-pawn. 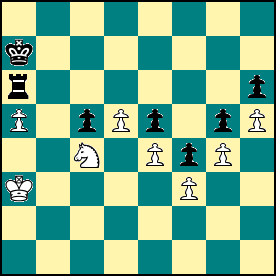 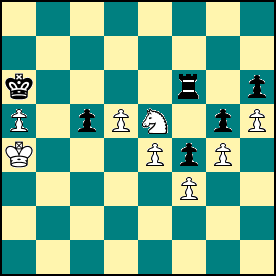 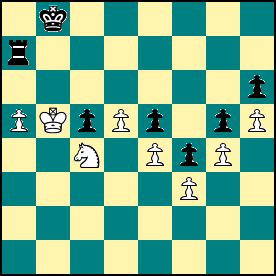 Another one bites the dust. 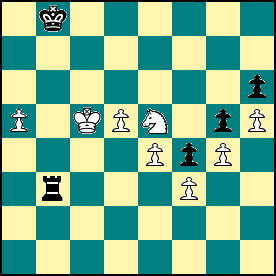 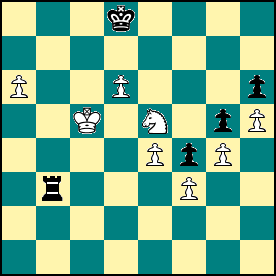 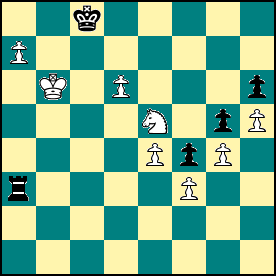 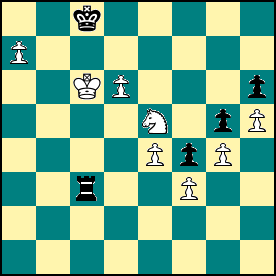 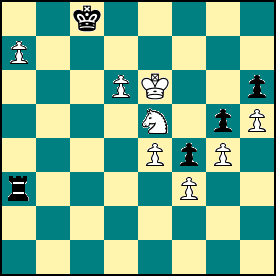 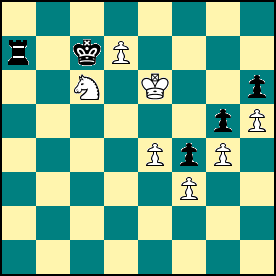 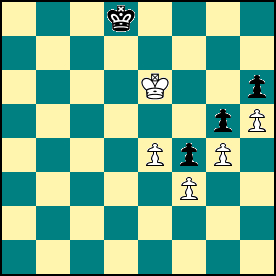 The position comes from the 17th European Individual Chess Championship, held May 2016 in Gjakova, Kosovo. The game is Viktor Laznicka–Baris Esen. It was featured in ChessBase Magazine #173, in Karsten Mueller’s endgame column.