Q: Who in your opinion is the most overestimated and the most underestimated player in the history of chess?

International Master Elliott Winslow and 12-year-old National Master Josiah Stearman are the top seeds in the Fall Tuesday Night Marathon and won their first round games, as did most most, but not all of the rating favorites. Proving that upsets can occur, even in games with 500 rating-point differentials, were Class C players Jerry Morgan and Kyle Donaldson, who are currently tied for first.

The Fall TNM, a nine-round event which is both USCF- and FIDE-rated, currently has 91 players, and looks likely to reach the 100-player mark, which would make it the 11th consecutive TNM to reach this benchmark, in a streak dating back to the summer of 2014.

It’s still possible to enter the Fall TNM with a half-point bye for the first round.

Grandmaster Sam Shankland and U.S. Team captain John Donaldson were not the only players with ties to the Mechanics’ Institute who were present at the Baku Olympiad. Grandmaster Batchullun Tsegmed played for Mongolia in the Open competition, while Batchimeg Tuvshintugs competed in the Women’s section. Christian Chirila seconded fellow Grandmaster Eric Hansen of Canada, who had an excellent tournament, while Bay Area blitz specialist and noted coach Arthur Ismakov brought the US team good luck. During Arthur’s brief stay in Baku the U.S. team won all three of its matches.

2) Bobby Fischer in the 1971 Candidates, by Boris Spassky

Among the artifacts in the late Peter Grey’s archive were two pages from Soviet Life, an oversize Soviet English language propaganda publication that would sometimes run chess articles. What Peter saved is a remarkable document—Boris Spassky writing about Bobby Fischer’s performance in the 1971 Candidates’. This is special because Spassky wrote the least of all the World Champions (by far) and we can recall no reigning World Champion sharing his views on his challenger’s performance on the eve of their match.

Spassky wrote this article in Russian and the translator was not familiar with chess, resulting in some strange phrasings. Some light editing has been done to better convey what Spassky wished to say. The game with Petrosian was given using English descriptive notation, which has been converted to algebraic. 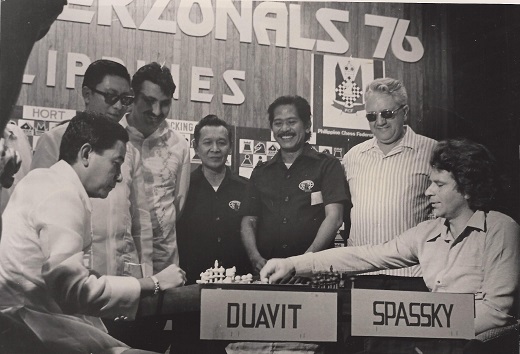 Even before the Candidates matches began I predicted that Fischer and Petrosian would meet in the final. Tigran Petrosian doesn’t cede a thing to his rival in his understanding of chess, but I still saw Fischer as the favorite.

The result of his match with Bent Larsen wasn’t what I expected. It’s true before the start I preferred Fischer, as I felt he was the stronger of the two in assessing positions, but I did think Larsen held certain trumps. Knowing his fighting disposition, I expected him to put up a real battle against Fischer. Even after the score was 4–0 in Denver, I had no doubts that Larsen would muster enough strength to stop Fischer’s string of victories. This did not happen—the last two games ended the same way as the preceding four.

A careful examination of the games in the match showed Larsen lost the encounter without putting up a real fight. It seems to me that his old trouble—the inability to defend himself—had a more telling effect in Denver than ever before. As soon as Larsen’s king was threatened, his play became feeble. Imagine that Viktor Korchnoi, for example, had Larsen’s position in the first game of the match.

Another reason for the Danish chess player’s failure is that his opening preparation wasn’t up to the mark. Of course, all this doesn’t take any credit away from Robert Fischer, who conducted the entire battle in excellent style. He played like an electronic computer, not letting his rival get away with even the slightest oversight. 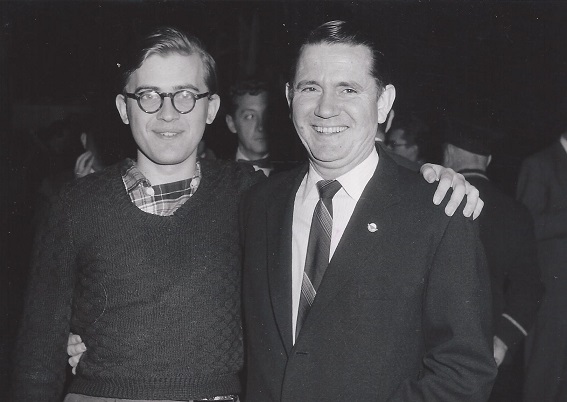 Fischer’s match with Tigran Petrosian was more interesting. The start of the match was in Petrosian’s favor. After the third game the initiative was unquestionably on his side. The whole chess world was impressed by the second game of the match, which Petrosian won with a spectacular offensive. As Fischer’s first defeat in the Candidates matches, it could have had unpleasant choices for him. I’m still convinced that after the second game Petrosian did not make the most of his favorable situation.

I believe the former world champion made the mistake of tempering his aggressive approach. Overcautious in the fourth and fifth games, he let Fischer recover his composure. At the same time, he preserved the equilibrium in the score.

The sixth game showed the situation was changing. Winning this important game, Fischer completely mastered the lack of confidence he had shown after a difficult start. Another dangerous symptom was Petrosian’s time trouble. No wonder the second half of the match was in sharp contrast to the first. Petrosian suffered a major setback in the sixth game, and after that he couldn’t control his opponent’s fiery attack.

Fischer played the second half of the match brilliantly. The last four games left an indelible impression – all the strongest aspects of the American grandmaster’s talents revealed themselves in the home stretch.

In the first half of the Buenos Aires match Petrosian was in the picture while Fischer was not, but in the final part the opponent’s changed roles. After the sixth game Fischer was obviously ahead. Of course, time trouble affected Petrosian’s play, but I see the main reason for his failure somewhere else – he was not tuned up for a tough battle. I have played six matches in the Candidates matches during my chess career, and experience tells me that you only win when you put up a struggle to the very end. I think my upcoming match with Robert Fischer will be interesting. The thought of meeting a player as superb as Fischer puts one in a fighting mood.

For the general chess public, I think the most interesting game Fischer played in 1971 was his first game against Larsen. It had everything—a sharp opening, attack and counterattack and mutual sacrifices. However Fischer’s seventh game against Petrosian is more to my taste. I consider it more characteristic of the American grandmaster’s style.

A traditional move for Robert Fischer—he starts all his games with the e-pawn.

Petrosian's choice in the opening clearly shows that he intends to fight a real battle.

In the first game of the match Petrosian also picked the Sicilian Defense, but instead of 4...a6 he played 4...Nc6. Chess fans know that after 5.Nb5 d6 6.Bf4 e5 7.Be3 Nf6 8.Bg5 Be6 9.N1c3 a6 10.Bxf6 gxf6 11.Na3 Black struck with the sudden counterblow 11...d5 which gave him excellent chances. Nevertheless, Black lost the game. Probably this fact played a part in Petrosian's decision not to continue the opening argument. Possibly he feared a surprise reply.

This is exactly the way I played in the first and seventeenth games of the 1969 match with Petrosian.

I preferred 8.Nd2 in my games with Petrosian, with the intention of continuing b3 and Bb2. Fischer has worked out a different play that is met with only rarely in tournament practice. Usually 8.c4 is not seen as posing any serious problems to Black. Fischer, however, has discovered an interesting method of strengthening White’s play that sharply changes the assessment of this variation. 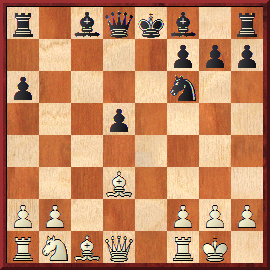 I do not agree with the commentators who criticized Petrosian for this move. I think it was the wisest choice. Of course, the pawn could have been taken by the knight, but after 11.Be4 White has a rich choice of active continuations. The capture of the pawn with the queen also holds no special prospects for Black in view of the simple but strong reply 11.Nc3.

I have been told that White pondered over this move 20 minutes. Nonetheless, it seems to me that he charted the further plan of play not over the board but at home. Many people are inclined to consider the spectacular maneuver 11.Nc3 and 12.Qa4+ as a novelty especially prepared by the American grandmaster for his encounter with Petrosian.

This was Fischer's first opening surprise in the match. Formerly the usual line of play was 11.Be3 Be7 12.Bd4 0–0 which permitted Black to preserve the equilibrium.

Petrosian could have interposed the bishop, but evidently he was apprehensive about the variation 12...Bd7 13.Qc2 0–0 14.Bg5. The other continuation 13.Qd4 is also unpleasant for Black. It is clear that all this requires considerable analysis, but there is no doubt that White’s position is preferable.

Petrosian offers his opponent the sacrifice of the exchange, but Fischer rejects this Greek gift. It is easy to see that 13.Bb5 axb5 14.Qxa8 0–0 would give Black the chance for formidable counterplay. 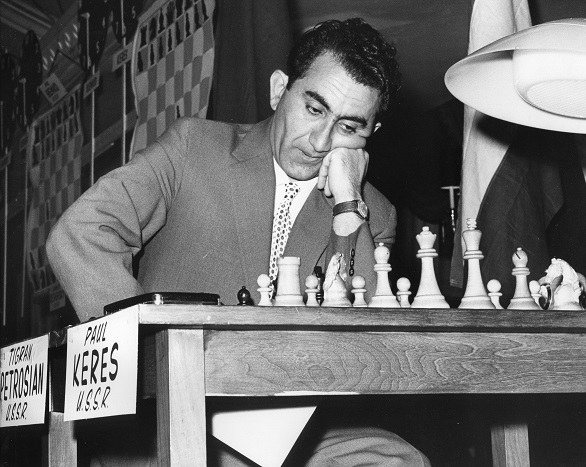 This calm continuation packs sufficient wallop that Black is now compelled to exchange queens and go over to a difficult defense. 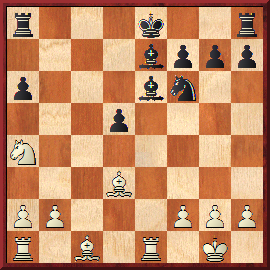 White’s positional superiority is becoming steadily more evident. He has an edge in pawns on the queenside, exercises control over the d4 and c5 squares, and is capable of getting hold of the c-file. I would even say that from the strategic aspect the outcome of the game is settled. The more so since Black’s a-pawn is hopelessly feeble, while the king is still in the center.

Black is forced to postpone his plans while castling, since it would be too risky to leave the king in the middle of the game.

The American grandmaster is consistently implementing his idea, planning the exchange of Black’s most important piece—the bishop on e7.

Fixing Black’s a-pawn in place and preparing for Nc5, Black has no active plan and is compelled to wait meekly for the situation to develop. 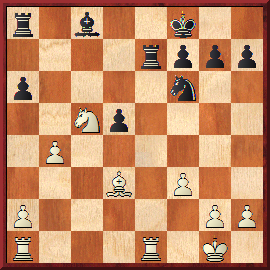 White, is in no hurry to rush things, preferring to strengthen his position gradually. Now he is opening the road to d4 for his king.

Were Petrosian to exchange rooks, his pieces would be pinned down by the defense of the a-pawn. 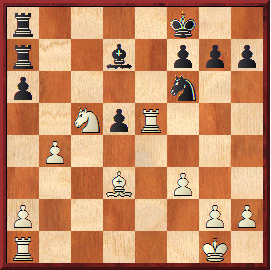 Quite characteristic of Fischer. In exchanging his powerful knight for the bishop, the American grandmaster unerringly calculated that this was the clearest and most economical road to victory. Now all the files are at White’s disposal, while no satisfactory defense against the threat of Kf2-e3-d4 can be seen. 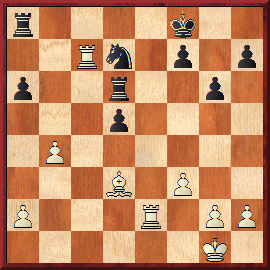 Black does not start this pawn demonstration on the kingside for the pleasure of it. If for instance 25...a5, then 26.b5, while 25...Nb6 permits White to get another rook on the seventh rank. 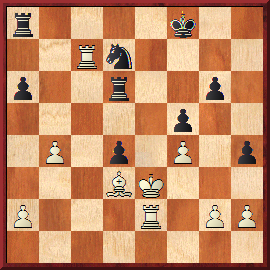 Three Americans are in the top seven in the world on the October FIDE rating list.

15-year-old Jeffrey Xiong of Texas continues to be the top-rated player in the world under 16.

In this position from a World Championship match Black is threatening to promote. What can White do? 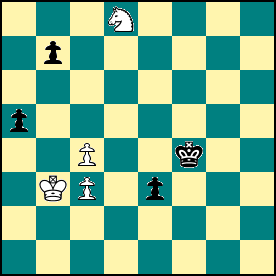 White began with a mistake. 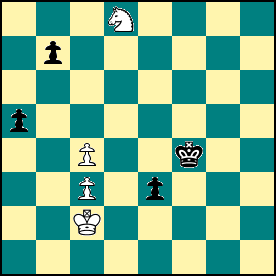 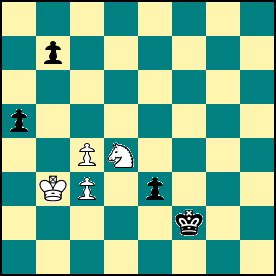 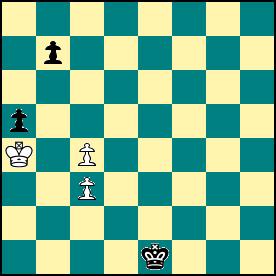 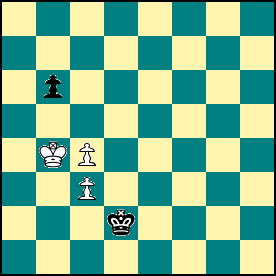 But after the game move, Black immediately took advantage with 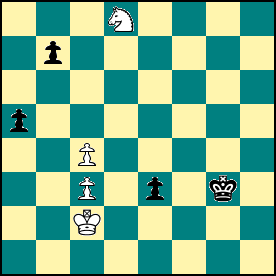 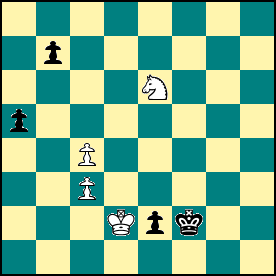 White doesn’t have a check. 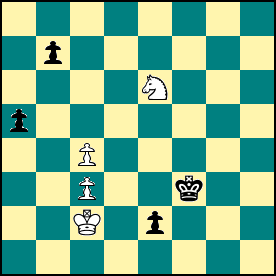 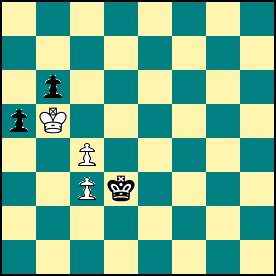 Black to move (analysis after 63 Kb5) 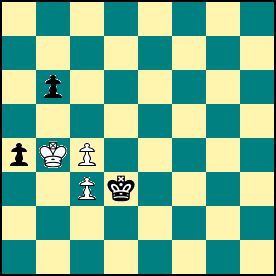 Black to move (analysis after 64 Kb4) 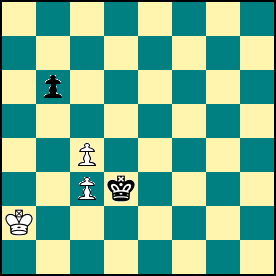 Black to move (analysis after 66 Kxa2) 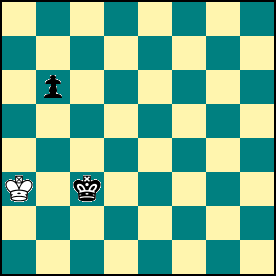 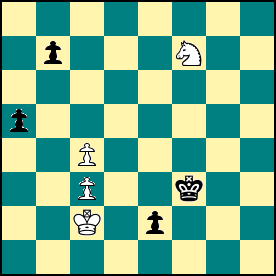 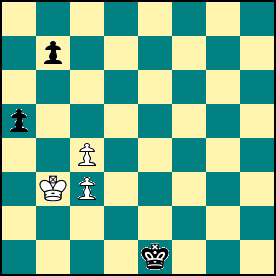 This position occurred in the sixth game of the 19th World Championship, Moscow 1951. White was David Bronstein, and Black was Mikhail Botvinnik. The analyses are recounted in Karpov and Gik’s Karpov’s Endgame Arsenal, and are due to Bronstein, Weinstein and Botvinnik.