When you’re sitting across someone, you unconsciously tend to listen to their breathing and become attuned to it. Invariably, at that level of proximity, if your opponent holds his breath or moves, or stops moving, you tend to take notice. If this is in an innocent position, I don’t give it much thought, but, in a tense position, if my opponent suddenly holds his breath I ask myself ‘Did he make a mistake, let me have a look’. So this information is in addition to what I get on the chess board.

The 16th Guthrie McClain G/45 will be held this Saturday.

Derek O’Connor won a very nice game with a queen sacrifice against Fall Tuesday Night Marathon leader Josiah Stearman in round seven . The two are now tied for the lead at 6–1 with 10-year-old Chinguun Bayaraa, who defeated fellow Expert Hongkai Pan in a positional tour de force. Right behind the three leaders, with 5½ points, are International Master Elliott Winslow and National Master Russell Wong. Two rounds remain for the 111-player field.

From round 7 of the Fall Tuesday Night Marathon:

Attendance in the Tuesday Night Marathon

The TNM has experienced steady growth the past few years, as the following figures show.

Congratulations to National Master Dharim Bacus, pictured in the December 2016 issue of Chess Life (page 36). Top scorer for the United States in the 27th NATO Championships with 5 from 7, he also had one of his wins published. Dharim played several tournaments at the Mechanics’ in 2012-2013 and his brother Ephraim still comes to the M.I. regularly.

Here is the Mechanics’ Chess Club weekend tournament schedule for 2017.

All events are five rounds with a time control of G/45 with 5-second delay except the following:

The Ray Schutt Memorial Blitz is a 6 (double round) blitz tournament.
The Wilkerson, Addison, Donnelly and McClain are six rounds with a time control of G/30 with 5-second delay.
The Fink, Stamer, Smith and Capps are two-day tournaments.

These 17 events plus the five Tuesday Night Marathons (either 8 or 9 rounds) add up to over 120 USCF-rated games a year.

Several young players who have played at the Mechanics’ Chess Club the past few years were named to the 2017 Trophies Plus All-America Team. They are

Saving money on equipment and books allows the MI Chess Club to have strong Grandmasters give guest lectures on Tuesday nights. Among those who have done so in 2015 and 2016 are Wesley So, Sam Shankland, Daniel Naroditsky, R.B. Ramesh (GM and captain of the Indian Olympiad team), Jacob Aaagard, Alex Lenderman, Christian Chirila and Jesse Kraai.

Agon, the organizers of the 2016 World Chess Championship, lost a US Court decision regarding the copyrights of the moves of a chess game.  This is the very same case that was ruled upon in Russia and Germany the past few years with the same ruling—annotations to games may be copyrighted but not the actual moves themselves. Read more at https://chess24.com/en/read/news/us-judge-agrees-with-chess24-on-chess-moves.

The first US Junior Open was held in 1946 and the participants that year and the following included many future stars such as Larry Evans, Walter Shipman, James Cross, Eliot Hearst, Hans Berliner and Paul Poschel but none of them won either event. The honors were taken in Chicago 1946 and Cleveland 1947 by Larry Friedman, who is all but forgotten today except by the doyen of American chess historians, International Master Walter Shipman of San Francisco, who remembers Friedman as a great talent who never had a chance to fully blossom. 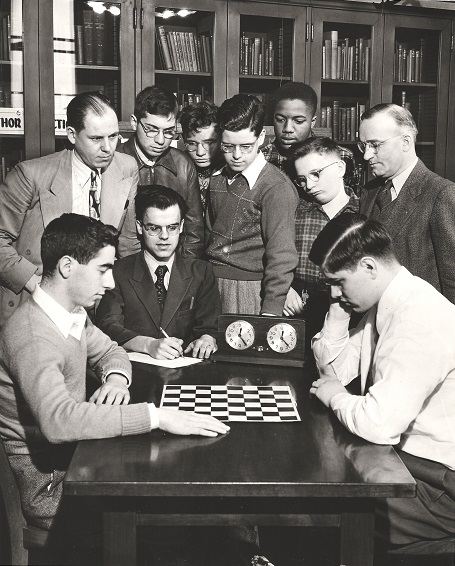 Chess Review (August-September 1946, pages 10-11) notes that Larry Friedman was fourth in the 1945 Ohio State Championship while a sophomore at Shaw High School in Cleveland, and that he was a product of the Pawns Chess Club, which met in the John G. White Collection at the Cleveland Public Library. Another player of note produced by the Pawns Chess Club at the same time was James Harkins Jr., who would become a 2300-rated player and a mainstay of Cleveland chess for over 60 years.

IM Walter Shipman, who played in the 1947 event, points out that Friedman effectively retired from tournament chess after his two U.S. Junior crowns. He appears on the first USCF rating list (July 31, 1950) at 2284. This list included results back to 1947, so quite likely it only reflects his result in the 1947 US Junior. Shipman remembers that Friedman came out of retirement to play in the 1958 New Jersey Open held in East Orange. Tibor Weinberger won the event with a score of 6½–½, with Charles Kalme second with 6 points. Friedman did quite well, tying with Weaver Adams as the top New Jersey resident, with a score of 5½-1½. 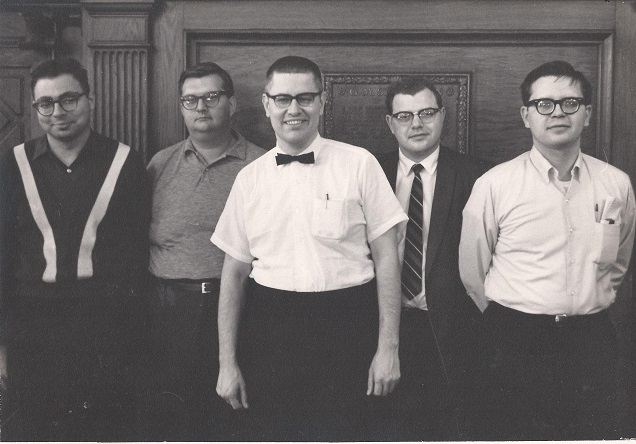 Mechanics’ Chess Coordinator FIDE Master Paul Whitehead, who tied for first in the 1978 U.S. Junior Closed with Yasser Seirawan and John Fedorowicz, points out an interesting and amusing story by Howard Langer about his grandfather Dr. Samuel Greenberg, a good chess player and the dentist for Sammy Reshevsky and Al Horowitz. The article can be found at http://www.tabletmag.com/scroll/218460/chess-memories-of-my-grandfather.

Lost among the chess movies that have come out the past few years (Pawn Sacrifice, The Queen of Katwe, etc.) the New Zealand movie The Dark House sensitively deals with the challenges of mental illness and how Genesis Wayne Potini deals with his demons by helping at-risk kids learn to become good chess players. This 2016 movie has consistently earned good reviews and has a 97 percent rating on Rotten Tomatoes. You can listen to a short video of Potini at https://www.youtube.com/watch?v=5Qm-5Qj4xLs.

This is a position from a grandmaster game, after 55 ... a5. What is the best play for both sides? 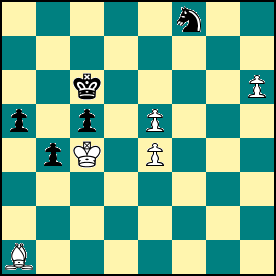 Here is an analysis of how White could have won. The main line is shown as bold, and side lines are labeled “analysis”. 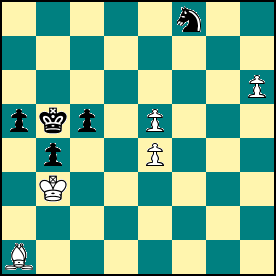 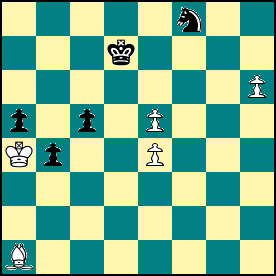 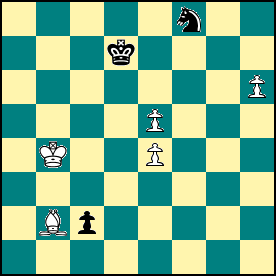 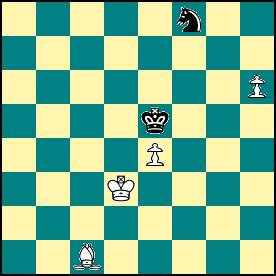 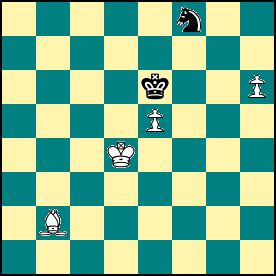 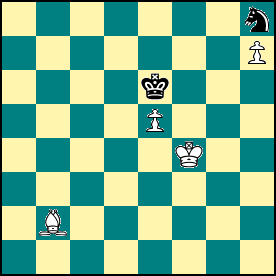 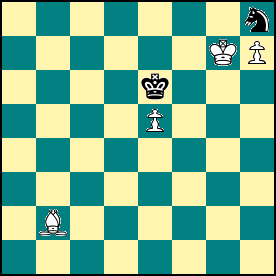 White wins the knight, and the game.

Back to the main line: 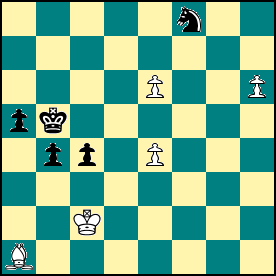 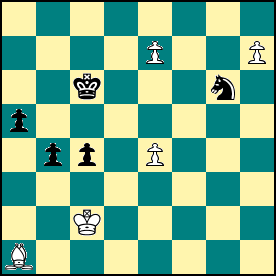 The knight can’t stop both pawns, so the king has to rush over, abandoning the queenside pawns. 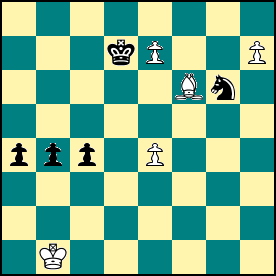 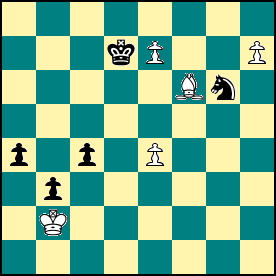 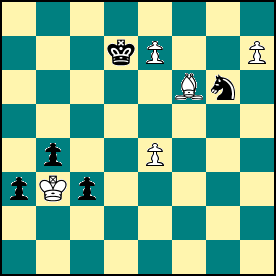 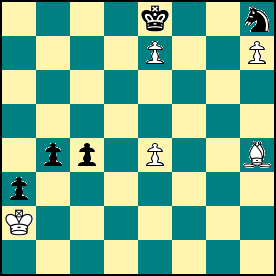 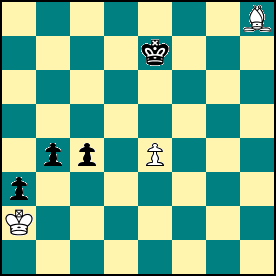 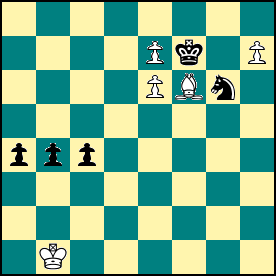 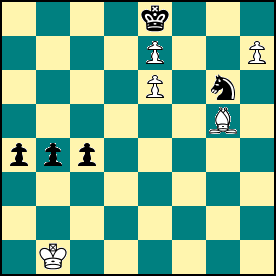 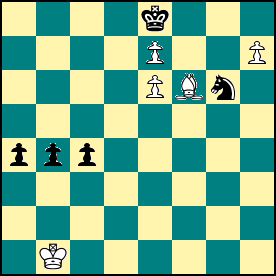 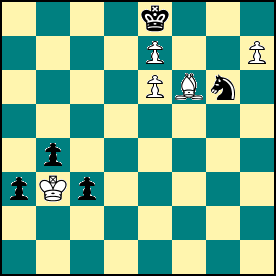 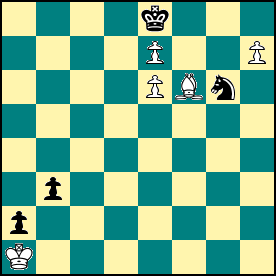 Black now has to give up his remaining two pawns. Note that 72 Kxb3? is a mistake, because after a1=Q, Black draws by 73 Bxa1 Kxe7.

The game was Euwe–Botvinnik, Nottingham 1936. Instead of the above win for White, though, it ended with 56 ... Kd6 ½–½. The analysis is from Hans Kmoch’s Pawn Power in Chess.