Congratulations to Wesley So for winning the Grand Chess Tour! He showed great consistency [and], bad news for opponents, he's still improving.

The 17th Bob Burger G/45 will be held this Saturday

The Winter Tuesday Marathon is off to a good start, with 88 players, including seven masters. International Master Elliott Winslow is the top seed. It is still possible to enter the eight-round event with a half-point bye for the first round.

Sam Shankland, rated number four in the United States on the January 2017 FIDE rating list, gave a well-received lecture last Tuesday night. Sam showed several of his games from the Olympiad and spoke about his experiences as one of Magnus Carlsen’s seconds for his recent World Championship match.

The Wednesday Blitz is taking a break and resumes on February 1.

Long-time Mechanics’ member Michael Dyslin died on November 14 of last year. A good all-around games player, Michael was particularly active as a tournament chess player in the late 1970s and early 1980s, when he roomed with International Master Jeremy Silman in the Haight-Ashbury district of San Francisco.

An independent contractor specializing in IT security, hundreds of companies utilized his services, including Intuit and Sephora. Michael is remembered by his friends at the Mechanics’ for his friendliness and sharp intellect.

The rise of American chess is reflected in the latest FIDE rating list. The big three of Fabiano Caruana, Wesley So and Hikaru Nakamura are rated respectively number two, four and seven in the world, and the U.S. has five more players in the top 100. Ray Robson, Sam Shankland, Alex Onischuk, Jeffrey Xiong and Gata Kamsky are bunched together between 2675 and 2666. All told the United States has 14 players rated over 2600. It is currently the second-rated country (average of top ten players) in the world at 2705, well behind Russia (2746), but ahead of China (2697) and Ukraine (2689).

There are plenty of young players in the pipeline as well. The U.S. has three of the top players in the world under 17—Xiong, Samuel Sevian (2603) and Ruifeng Li (2564). Awonder Liong is the top rated player under 14 at 2496, and overall there are a dozen U.S. players on the top 100 junior list.

From December 15–20 one of the strongest Swiss system tournaments ever held in the history of Latin America , the Carlos Torre Memorial, took place in the city of Merida, Mexico. Cuban grandmaster Lazaro Bruzon Batista was victorious for the fourth time in a row and the fifth time ever. He was the sole winner with 7½ out of 9, edging out GM Aleksandr Shimanov from Russia and Peruvian IM Deivy Vera Siguenas, who both obtained 7 out of 9. Grandmaster Alex Onischuk was the top-scoring American with 6½.

Gata Kamsky continued his series of successes the past few months. Here is yet another win by Gata with his trusty London System. 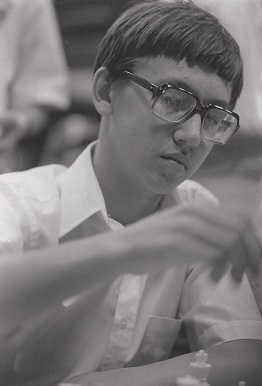 Go to http://roadsandkingdoms.com/2015/king-of-the-caucasus/ for an interesting article on Levon Aronian and chess in Armenia.

In August this year, 18-20 we are going to be hosting GM Simon Williams (his first time in the US) for a couple day Renaissance, chess, laughter, a simul and good old camaraderie.

Iowa and the Quad-Cities has a lot to offer for several days and tourism, believe it or not, is one of our top industries for our state.

We are trying to beat the drum to fill the 45 spaces.

The Grand Chess Tour (GCT) is pleased to announce that the Universal Rating System (URS) has formally launched and the first URS rating list for the month of January 2017 is now available at the official URS website universalrating.com. The methodology and philosophy behind the new site and system are explained in detail on the new website which officially launched on 1 January 2017.

GM Ian Nepomniachtchi earns his place due to his consistency across all time formats which sees him placed 5th on the URS rating list as at 1 January 2017. This earned him selection as the highest ranked player on the URS not already picked.

GM Sergei Karjakin was then selected as the second highest ranked player on the URS not already picked after a year that saw him compete in the 2016 World Championship match and secure the title of World Blitz Champion.

The final wildcard has been awarded to former World Champion Viswanathan Anand who is ranked 10th on the URS rating list as at 1 January 2017. He also tied for 4th place in the 2016 GCT tour despite only competing in three of the four events in 2016.

GM Levon Aronian has been selected as the first alternate and will be invited to join the 2017 tour as a full tour member if any player declines to participate for any reason.