I quit during the first year. I was studying Political Economy at St. Petersburg State University. It was a special department where chess players could study, but reading those textbooks put me into a state of depression. I scratched my head and decided: “no”. I don’t want to be an economist—why should I go through all of this? In part it’s a pity, because I cut myself off from some kind of life-altering experiences. Perhaps they would have taught me to work a little if I’d gone through all five years, but at that moment it was clear that I was going to be a chess player, and I considered there was no need for a higher education. And the example of my contemporaries—Vasily Yemelin, Vadik Zvjaginsev, who I competed with as an equal, shows I was right. They graduated with glowing diplomas from serious institutions, but that held back their chess development. If you study something seriously then you have to take a break in your chess career, and those are precious years when you absorb things like a sponge and experience explosive growth.

—Peter Svidler, discussing whether university studies are good for a top chess player.

The San Francisco Mechanics’ lost to Seattle 7½-8½ in the third round of the Pro Chess League. International Master Steven Zierk had a great debut scoring 3 out of 4 beating Grand Master Giorgi Margvelashvili and International Master Georgi Orlov and drawing with Grandmaster Gabriel Sargissian who is rated number 85 in the world.

Jules Jelinek writes: Wednesday Night Blitz is back. Here is the schedule for the remainder of 2017.

February 1 through June 28 nonstop.
August 30, through November 15
November 29 through December 20.

The Frank P. Samford, Jr. Chess Fellowship, marking its thirty-first annual award, has selected Grandmaster Jeffery Xiong of Coppell, Texas, as its 2017 Fellow. The Samford is the richest and most important chess fellowship in the United States, having awarded over two million dollars the past three decades. It identifies and assists the best young American chess masters by providing top-level coaching, strong competition and access to study materials. The Fellowship also supplies a monthly stipend for living expenses so that the winners may devote themselves to chess without having financial worries. The total value of the Fellowship has been increased several times over the years and is now $42,000 annually. The prize is awarded for one year and can be renewed for a second year. The winner’s term begins July 1, 2017.

Sixteen-year-old Jeffery Xiong is the reigning World Junior Champion and is currently the third-rated player under 21 in the world at 2667 on the January 2017 FIDE rating list. Last year he made an even score in his U.S. Championship debut and won the B group of the Capablanca Memorial.

The Samford Chess Fellowship was created by the late Frank P. Samford, Jr. of Birmingham Alabama. Mr. Samford was a distinguished attorney and CEO of Liberty National Life Insurance Company (now Torchmark). He was active in civic, business, political, educational and cultural affairs. Mr. Samford was also an enthusiastic competitor in chess tournaments. After providing financial support for several chess projects he decided to do something significant for American chess. The result was the Samford Fellowship.

Generous contributions from the late Mrs. Virginia Samford and the Torchmark Corporation support the Fellowship. The Samford Fellowship is a fitting memorial to an extraordinary man. The dedication, creativity and achievement that marked Mr. Frank P. Samford, Jr.’s life are examples for all chess players to admire and emulate.

The chess club in the Australian city of Ballarat has recently started meeting again in its Mechanics’ Institute, as National Master Michael Aigner writes.

I found this interesting article while surfing the internet. Apparently San Francisco is not the only city with a chess club at a building called the Mechanics’ Institute. Check out Ballarat, an Australian town about an hour drive outside of Melbourne. The old club photo from 1925 looks like it could have easily been in San Francisco.

Magnus Carlsen will be appearing on an upcoming episode of “The Simpsons”, which airs on Sunday, February 19. Here are the exclusive images that John Henderson got for New in Chess, which ran the spread in its latest issue. We thank John for permission to use these. 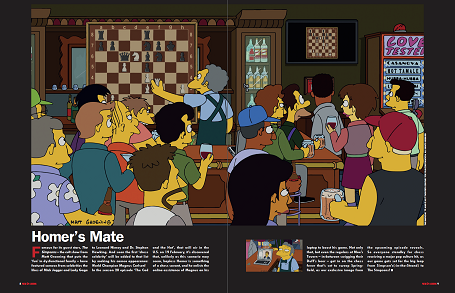 Click image to enlarge (opens in a new window).
Use browser’s back button to return.

Peter Thiel and Alan Trefler, who tied for first in the 1975 World Open when rated only a master, are the only chess masters we know who are billionaires, but give an honorable mention to the hedge fund manager and author James Altucher, who is another retired USCF master. Altucher continues to value the game highly and writes about its impact on him at www.jamesaltucher.com/2015/08/what-i-learned-from-chess.

Arthur Stamer (1884–1964) had a long association with the Mechanics’ Institute Chess Club. He won the club championship in 1905 and 1923 and several decades later served as the Club’s first Chess Director from 1951 to 1964. International Master Ricardo De Guzman has won it a record eight times. 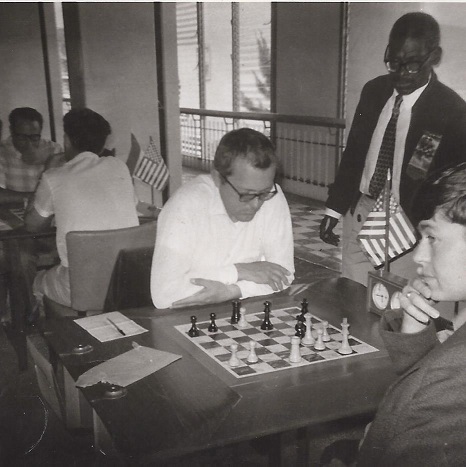 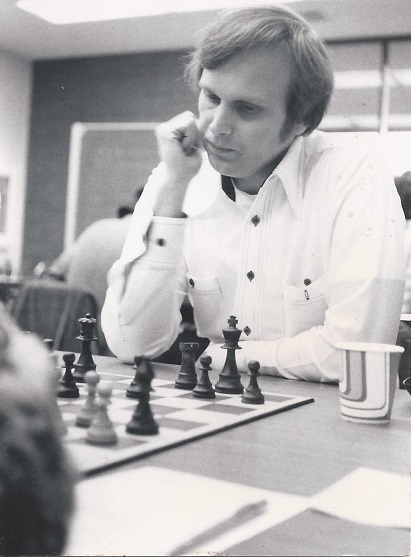 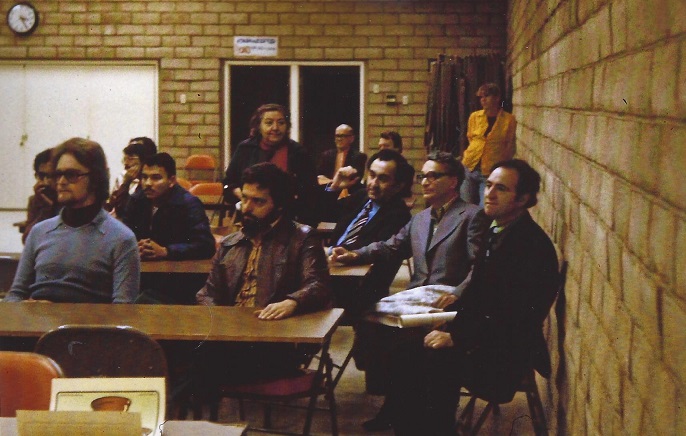 Grandmaster Peter Biyiasas, one of only two players to compete in both the U.S. and Canadian championships (Duncan Suttles is the other) is pictured in this group shot taken at Lone Pine 1978. Front IM Rubens Filguth and GM Peter Biyiasas (hand on table), near the wall is GM Lev Polugaevski, with Leonid Shamkovich and Tigran Petrosian nearby. Helen Kashdan is standing. (Photo: Alan Benson) 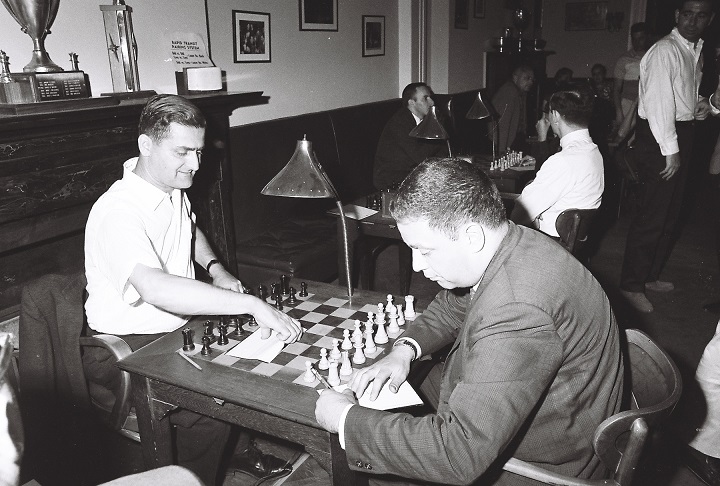 In this study, Black, despite a huge material advantage, can hardly move. Only his rook on e1 is available for service. But it’s White’s move. 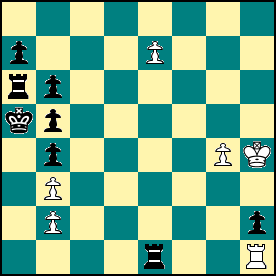 Let’s look at the obvious moves. 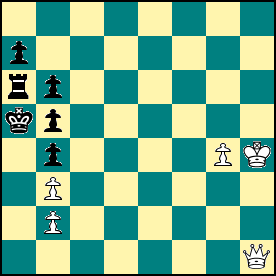 Black to move (analysis, after 4 Qxh1) 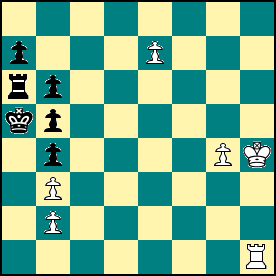 Black to move (analysis, after 2 Rxh1)

Finally, 1 Rxh2 Rxe7 will be a draw by perpetual check, as in the lines below.

So, White starts with 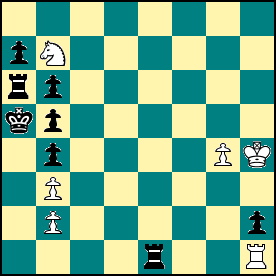 Black to move (analysis, after 3 Nb7)

What is the point of this seemingly useless move? Black is threatening to draw by 2 -- Rxg4+ 3 Kh5 Rg5+ etc. 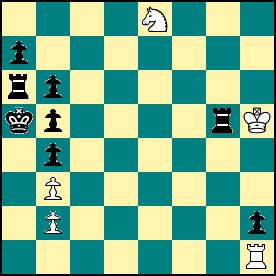 If White captures the rook, it’s stalemate, so 4 Kh6 Rg6+ 5 Kh7 and the checks are unstoppable. White avoids this with 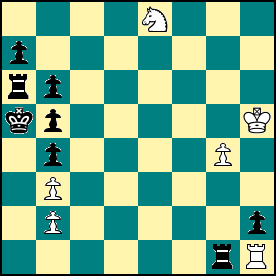 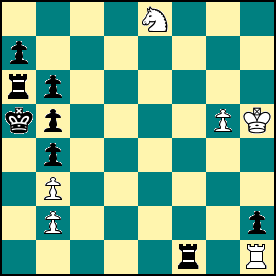 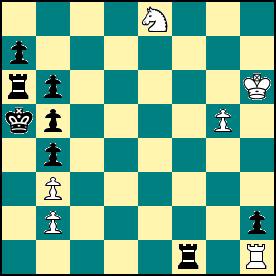 Remember, the black rook can’t leave the first rank without a check, otherwise it’s mate on a1. 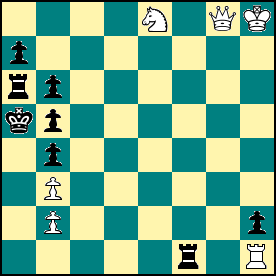 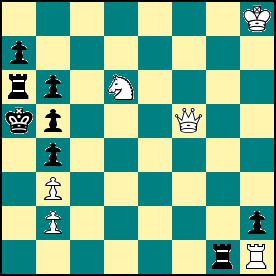 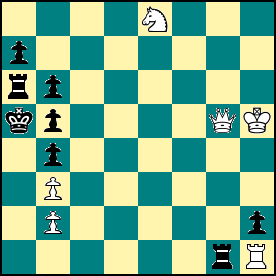 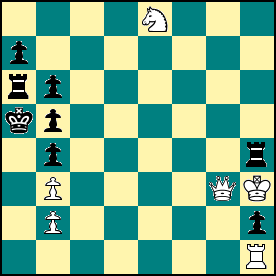 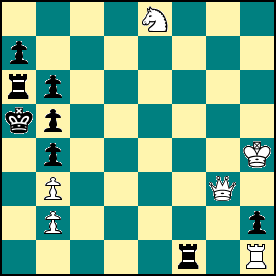 Now we have reached the crucial position; the knight springs into action. 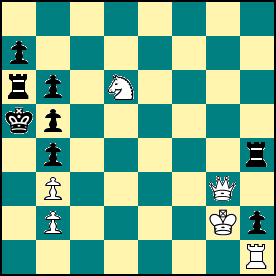 Black can stop the knight, but not the rook. 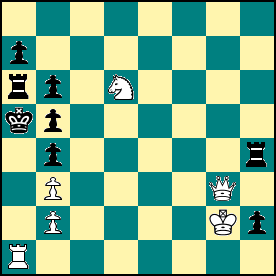