Q: You’re a five-time Olympiad winner as part of the Russian team, but all the victories were gained up to 2002, when Kasparov was in the line-up. Then it all stopped. Why?

It’s not directly connected with Garry Kimovich. Those were victories for the USSR chess school, but it was already clear that the process that began with the break-up of the country would make the Chess Olympiad incomparably tougher, that sooner or later the republics which previously provided talent for the USSR team would become serious rivals—as happened, for instance, with Armenia.

—Peter Svidler, discussing the failure of Russian teams in Chess Olympiads this century.

National Master Conrado Diaz and 11-year-old Expert Chinguun Bayaraa are tied for first with 6 from 7 in the 112-player Winter Tuesday Night Marathon, and will meet in the last round. International Master Elliot Winslow, National Master Romy Fuentes, and Experts Arthur Ismakov, Igor Traub and Steven Krasnov are a half-point behind. The latter has raised his rating over 100 points the past year. If Steven were a kid this would be commendable if not unusual, but he is 74.

The San Francisco Mechanics’ entry in the Professional Chess League lost to the Dallas Destiny 6½-9½. Bright spots for the Mechanics’ were Sam Shankland (2½/4) and reserves IM-elect Cameron Wheeler (1½/2) and FIDE Master Rayan Tagizahdeh (1½/2). The Mechanics’ finish their season next Wednesday evening against Portland. Go to www.chess.com/article/view/pro-chess-league-guide for more information.

One of the great bargains in American chess has to be a membership in the Mechanics’ Instititute. Where else can you find a chess club open 10 hours a day, seven days a week, plus access to a general-interest library that includes over 2000 chess books, magazines and chess videos, for only $95 a year ($35 for juniors)?

The Fox reality series Kicking and Screaming debuts on March 9 at 9 pm (8 pm CT), and among those on the show are Grandmaster Sam Shankland, who can be seen near the end of a short clip (requires Flash). Give Sam some distance when he has an axe in his hand!

FIDE Master Roger Poehlmann and National Master Ladia Jirasek tied for first in the Berkeley Chess Club championship, held from November 20, 2016, to January 20, 2017. The winners’ 6–1 scores (Poehlmann beat Jirasek in their individual game) put them a point ahead of the rest of the 38-player field. International Master Elliott Winslow and Experts Derek O’Connor and Steven Gaffagan shared third place with 5 points. Elizabeth Shaughnessy organized and Bryon Doyle directed for the Berkeley Chess Club.

Few American players have as distinguished a record in U.S. Championships as James Sherwin (born 1933). Among non-Grandmasters only Sherwin and fellow International Master William Addison have achieved lifetime plus scores (five events or more) in the most prestigious annual competition in the United States. Addison did it in five tournaments in the 1960s, while Sherwin achieved his record in eight tournaments during the 1950s and 1960s. 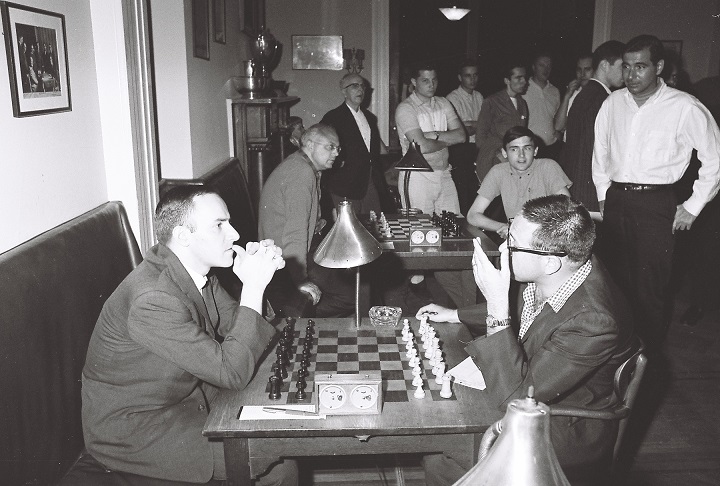 James Sherwin (Black) and Arthur Bisguier get ready to face off in a game played at the Marshall Chess Club in the mid-1960s. Paul Brandts (glasses) and a young Andy Soltis are on an adjacent board. (Photo: Beth Cassidy).

A close look at Sherwin’s consistent performance, all the more remarkable in that he was never a professional player, shows that only Bobby Fischer, Sammy Reshevsky, Larry Evans and Robert Byrne had better records in the U.S. Championships held in the 1950s and 1960s.

The highlight of Sherwin’s career was finishing third in the 1957–58 U.S. Championship behind Bobby Fischer and Samuel Reshevsky. This qualified him to play in the 1958 Interzonal, where he scored 50 percent against the six qualifiers for the Candidates’ Tournament, beating Gligoric and Olafsson.

Sherwin first attracted widespread attention when he won the 1951 New York State Championship at the age of 17. Two years later he qualified for the A group of the World Junior Championship, where he defeated Boris Ivkov and Bent Larsen. Sherwin’s first major national success was tying for first with Arthur Bisguier in the 1956 U.S. Open in Oklahoma City.

While Sherwin will be remembered as a strong player he also made a very important contribution as the president of the American Chess Foundation from 1979–1990. This was during its golden period, when it offered strong support to top American players.

John Henderson, who writes an excellent column for the Seattle-based First Move organization (http://www.1stmove.org/author/johnhen), draws attention to the first episode of series 4 of Endeavour, the Inspector Morse prequel. Entitled ‘Game’, it has a big chess subplot, with some wonderful chess imagery, even some cryptic chess clues, such as lockers belonging to dead people numbered ‘E4’ ‘E5’ and ‘F4’. Learn more (as of the date of this Newsletter, the episode is no longer available on the site).

National Master John Blackstone of Las Vegas has discovered the following games, among the earliest played in Los Angeles.

Those looking to play chess in Contra Costa County should check out the Contra Costa Chess Club, which meets on Wednesday evenings, at the Starbucks located at 1536 Kirker Pass Rd., Clayton, Calif., from 5:30–9:00 pm. For more information go to ccchess.com.

See how you do with this study. 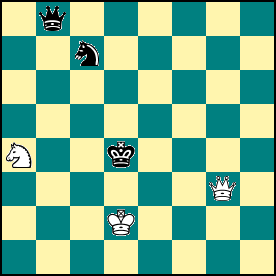 An observant White notices that his knight is the only piece not on a dark square, so he rushes it to remedy this with

Fortunately for this ridiculous reasoning, it is the only move that wins. Let’s see why. 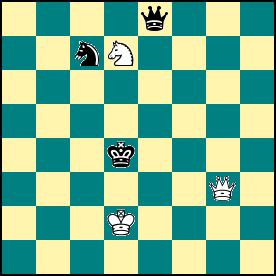 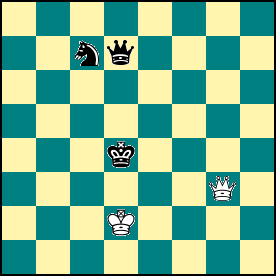 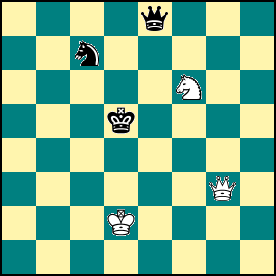 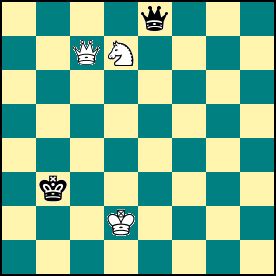 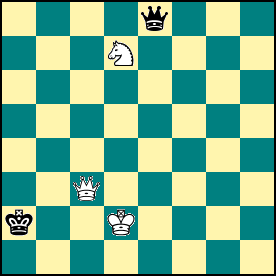 Black’s queen couldn’t survive a check, and he must defend b2. 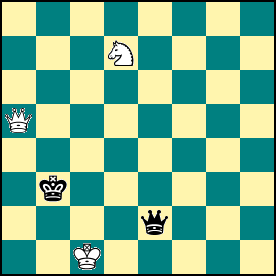 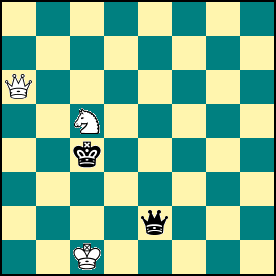 White wins the queen, and that’s all she wrote.

This study was composed by Alexey Alexeyevich Troitsky (1866–1942) in 1909; it appears in Wikipedia. Another of his ingenious studies appeared in Newsletter 773.

The composer (or someone who transcribed the study) gave the slightly longer line 3 ... Kb4 4 Qc5+ Kb3 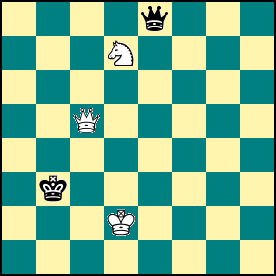 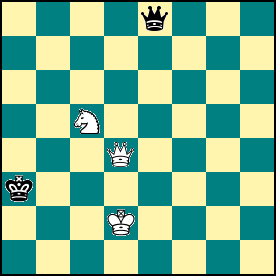 Black to move (analysis, after 7 Nc5)