I found him surprisingly normal. Well, at least not very tense. He seemed to be relieved to be in the company of chess players. He was calm in that sense. He was also a bit worried about people following him, so the paranoia never really went away. But I am really happy I got the chance to meet him before he died in 2008. It was weird as well because I kept having to remind myself that this was Bobby Fischer sitting in front of me!

—Viswanathan Anand, in answer to what Bobby Fischer
was like when the two met in 2006 (interview here)

The Fall Tuesday Night Marathon/William Lombardy Memorial is only a third of the way through, but there have been upsets galore. National Master Conrado Diaz, Expert Michael Walder and Alexander Ivanov and Class A players Alfonso Cheng, Greg Sarafian and Cailen Melville are the only perfect scores in a field of 120 players. It’s still possible to enter the FIDE and USCF rated event with half-point byes for the first three rounds.

This marks the 16th consecutive Tuesday Night Marathon in a streak extending back to the fall of 2014. Last Tuesday night 106 players competed at the same time which is a record for the TNM, which sees many of the participants take byes in the course of the lengthy event.

The November 1st edition of the Wednesday Night Blitz attracted 10 players. National Master Ezra Chambers was first with a score of 11 from 12. Carlos D’Avila was second at 10 followed by Jules Jelinek with 8½ points.

Mechanics’ TNM regular Steven Krasnov shared his experience of playing the late Grandmaster Bill Lombardy before round two of the Fall TNM. Krasnov came to the MI one afternoon in September and was graciously invited to play some old-time skittles chess (no clock) by the famous Grandmaster. Expert-rated Krasnov caught Lombardy off guard and defeated him using the King’s Gambit and was then completely crushed in two games in short order. Steven remarked he will always be grateful for this opportunity.

National Master and High School Student Ezra Chambers also expressed thanks to Grandmaster Lombardy for his advice and encouragement.

Jay Whitehead, along with his brother Paul, and William Addison, are the strongest players to develop their strength while living in San Francisco. Jay played twice in the U.S. Championship and received his International Master title in 1986. That year he played in an international tournament in San Francisco at Miz Brown’s restaurant (one of several in a chain based in the Bay Area) located on Mission between 21st and 22nd street.

The event, organized by Guillermo Rey, who would later earn the IM title, is best remembered not for Nick de Firmian’s victory or Elliott Winslow’s second-place finish (his final IM norm), but for the participation of 16-year-old Susan (then Zsuzsa) Polgar.

The late Val Zemitis and Israel Parry were the go-betweens who helped to make Susan’s participation possible.

The first of the following four photos, all from 1986, has Jay playing Susan in the Miz Brown’s event. The following three are of Jay who was an active member of the Hare Krishna movement at the time. The photos were given to Jeremy Silman many years ago and he kindly passed them on us this past September. Jeremy doesn’t remember who took them. 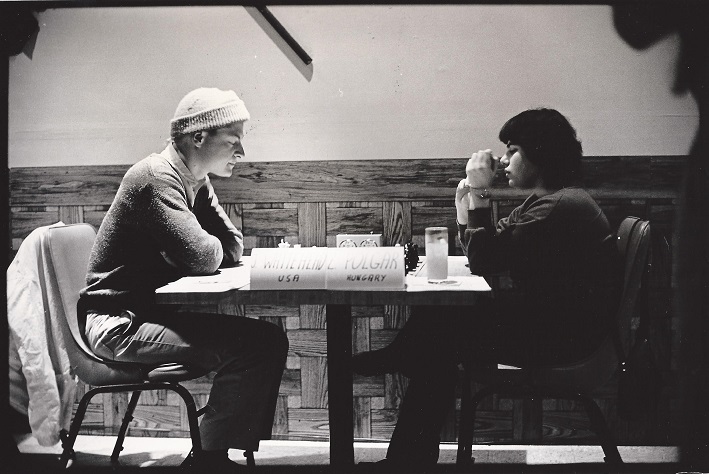 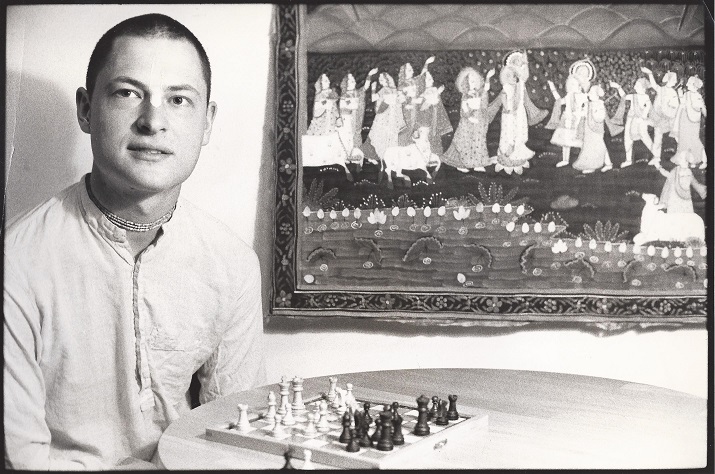 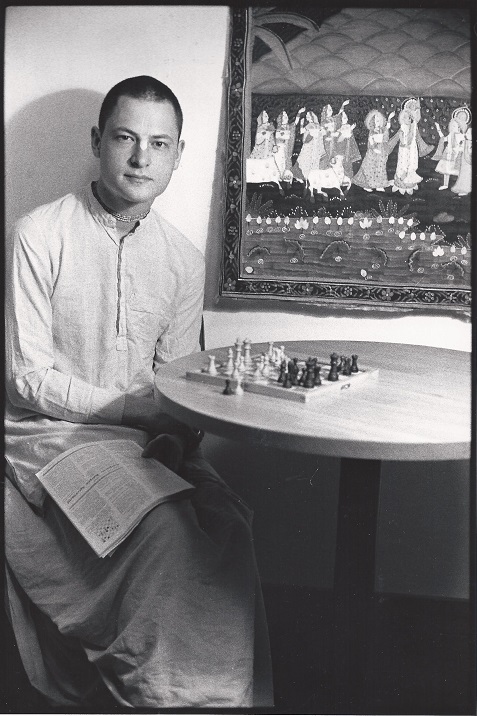 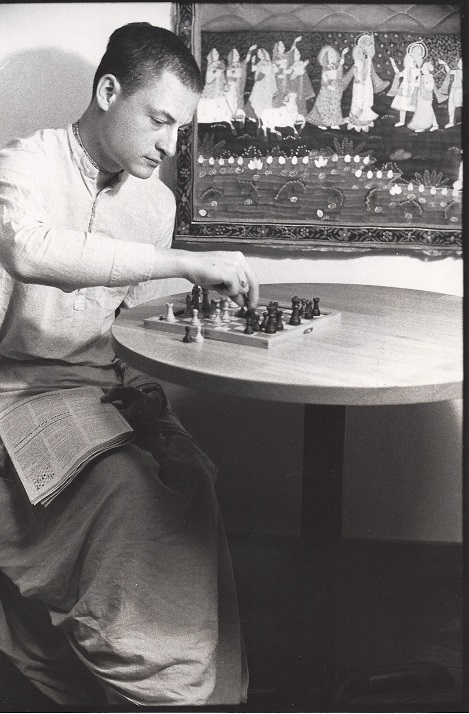 This beautiful game of John’s, with my notes, was honored as the Game of the Month in the California Chess Reporter, Vol. 11, No.8, June, 1962. The games editor, Valdemar Zemitis, wrote the forward: “The following game from last year’s California Open is a noteworthy example of enterprising play by one of northern California’s rising young stars. His opponent has been the area’s most active player in recent years—participating in and winning three separate qualifying tournaments for the 1961 State Championship alone. His sound style is difficult to win games against—here Jon Blackstone shows how.” 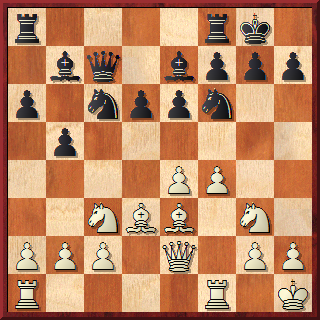 Black must, however reluctant, defend his a-pawn.

19.Nh5 looks stronger but Black can grasp the thread leading to safety by maintaining a knight at e5. 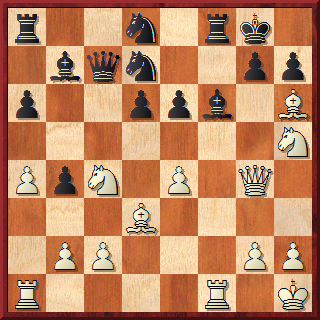 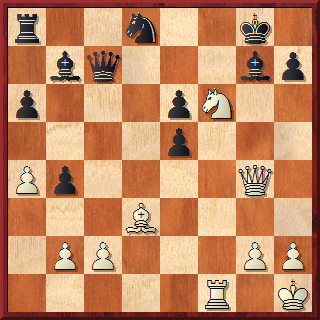 Not 29.Qh5? Bxf6 easily defending against the mate threats.

Black is nearly in zugzwang. His best chance is 29….Nf7 30.Qg6! with the following possibilities (variation 4 is bifurcated and extended from the original publication.):

This is a recent Mechanics’ Chess Club ending. 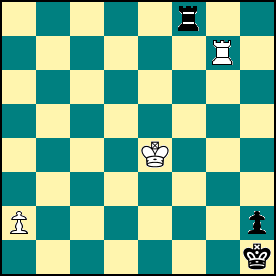 Black’s pawn is much closer to promotion, so White’s goal is to keep checking, or to confine the black king to the blocking square h1. Black will try to escape both the checks and h1.

In the initial position, the white rook keeps the black king on h1. Black will try to position his rook on the g-file to escape

White could have drawn only with 1 Ke3! 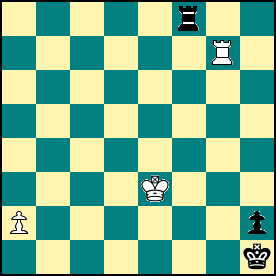 Black to move (analysis, after 1 Ke3) 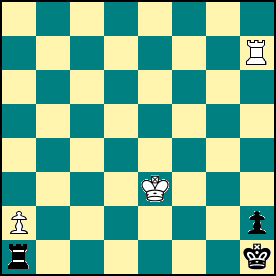 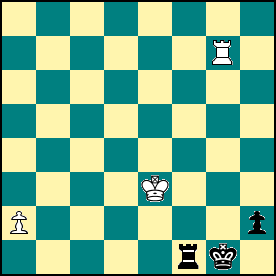 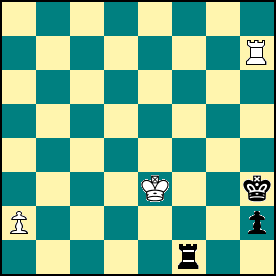 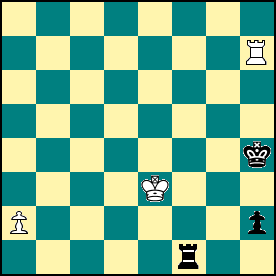 etc. Black must protect the h-pawn. 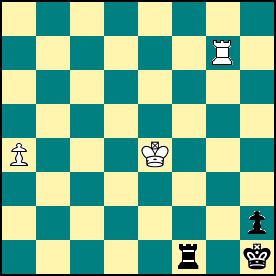 2 a5 Rg1 the only winning move; now Black controls the g-file. 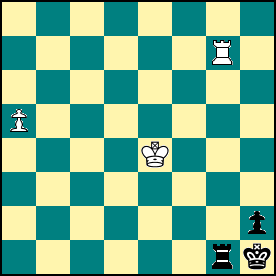 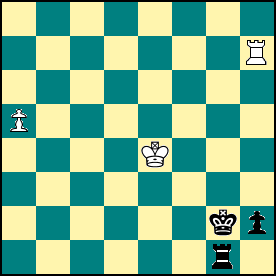 The h-pawn is threatening, and the a-pawn isn’t far enough advanced to allow White to sac the rook. 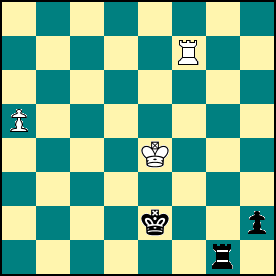 The white king shields Black from another check. 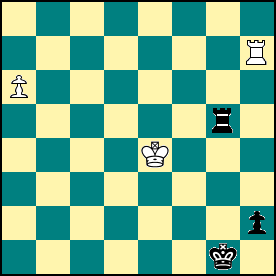 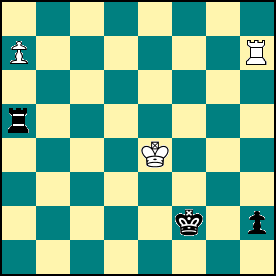 Black to move (analysis, after 7 Rh7) 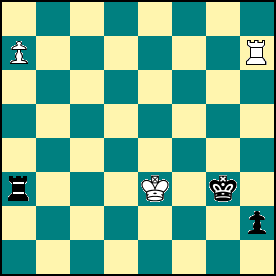 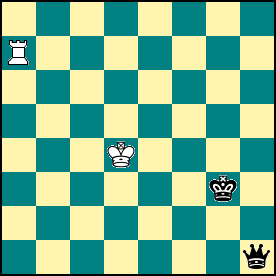 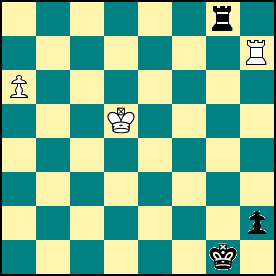 Black to move (analysis, after 5 Kd5) 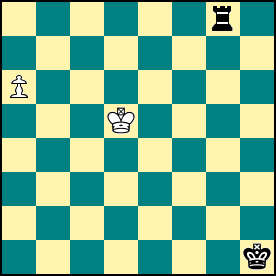 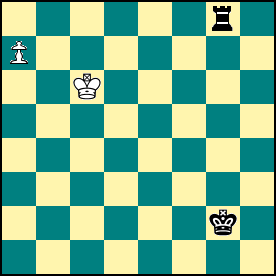 Black will have to give up his rook for the pawn. 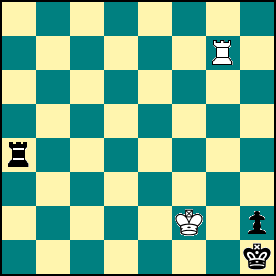 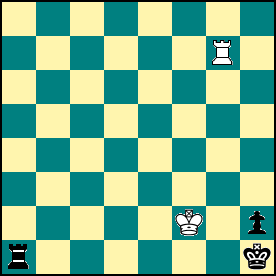 This was the game Michael Lum–Juan Cendejas, from round 2 of the 2017 Fall Tuesday Night Marathon.