Practically speaking you could say that we don’t, as it’s only a spectacle for those in the know, while in terms of its educational functions it can no doubt be substituted by other games. But chess is part of human civilization: of history, tradition, culture – it’s one of those things that distinguish us from the Neanderthals.

—Grandmaster Mikhail Krasenkov, in answer to the question: Why do we need chess?

The Fall Tuesday Night Marathon / William Lombardy Memorial is heading for an exciting finish with FIDE Masters Paul Whitehead and Josiah Stearman, National Master Conrado Diaz and Expert Alexander Ivanov tied for the lead at 6 ½ from 8 with one round remaining. International Master Elliott Winslow and National Masters Natalya Tsodikova and Derek O’Connor are half a point behind.

The event, which is proving to be a fitting tribute to the late William Lombardy, currently has 135 entries, tying the all-time Mechanics’ Chess Club attendance record set this past summer. Games from this TNM and all others going back over a decade can be found at the MI Chess Club web site. As an added bonus International Master Elliott Winslow has annotated many of his games the past few years, and many others feature light comments by your editor. We are indebted to Peter Sherwood for his help in making this resource available to TNM players and the public.

Thirteen players showed up for the December 6 edition of the Wednesday Night Blitz. Jules Jelinek won with the outstanding score of 11½ from 12. Fellow Expert Carlos D’Avila was second at 9 and National Master Ezra Chambers finished third with 8½ points. Come join the action for this weekly tournament which costs less than a movie and features prizes for the top three finishers.

Many thanks again to Russell and Mary Sue Brandwein for their very generous gift to the Mechanics’ campaign to restore its chess tables, many of which have been part of the club since 1913. Their donation was made in honor of Steve Brandwein, who was deeply involved with Mechanics’ chess for over 30 years. The two-year anniversary of Steve’s death was December 12.

Those who want to support this campaign can advantage of this opportunity to commemorate a loved one, or honor a person, family, or business, by naming a chair in either the world-renowned Chess Room or the Meeting Room of the Mechanics’ Institute.

This opportunity is available for a donation of $500 per chair. Your gift will entitle you to an engraved, brass, personalized nameplate mounted on the back of a Mechanics’ Institute chair. When you sponsor a seat, we will acknowledge your gift to the recipient of your choice. Chair donations are tax-deductible to the full extent allowed by law.

We note the death of many-time Michigan Champion Paul Poschel at the age of 87 on March 28. Poschel is best known for tying for second in the 1960 U.S. Open. His triumph was written up here.

Bob Dudley, died on February 19 at the age of 88. Dudley was a key member of the Pittsburgh Chess Club for three decades and published its newsletter, En Passant, for 25 years, but will be best remembered for founding Chess Enterprises. Dudley’s small publishing firm produced many outstanding books for over two decades while he was simultaneously holding down a full-time job as a college professor. An obituary for him can be found here.

National master Erik Karklins, also of Chicago, died on March 25 at the age of 102. Karklins, who was born in Latvia, came to the United States in the early 1950s. Family and professional life (he was an architect) never allowed the him to play chess as more than a hobby, but he attained the National Master title in 1984, at the age of 68, the third oldest U.S. Chess Federation member ever to do so (Oscar Shapiro and Fred Wilson were in their early 70s). Karklins, who had a peak rating of 2305, was playing 2100-level chess in his late 90s. He is survived by his son, FIDE Master Andrew Karklins.

Staff Sergeant Bryan Black of Puyallup, Washington, who was killed on October 4, 2017 in Niger, at the age of 35, was a regular tournament player in his teens, holding a Class A rating (peak 1989). He drew with Irina Krush in the 2000 National High School Championship.

The fifth and final volume in International Masters John Donaldson and Eric Tangborn’s series on the life of Bobby Fischer is now available and can be found here.

This book covers the critical period leading up to Fischer’s winning the World Championship and the dark years that followed. The first half deals with the road to the title starting with Fischer’s last Swiss system tournaments: the 1963 Western and New York State Opens. Particular attention is focused on his Candidate Matches with Mark Taimanov, Bent Larsen and Tigran Petrosian.

The second half of the book deals with Fischer’s life after winning the crown. Among the highlights are Bobby’s fascination with chess computers, his lawsuit with Brad Darrach, visits to San Francisco and the rematch with Boris Spassky. The latter includes an in depth look at the training games he played with Svetozar Gligoric and Eugenio Torre prior to facing Spassky.

A detailed analysis of Fischer’s handling of the black side of the Maroczy Bind is given, as is a critical examination of his charges that the Kasparov–Karpov matches were rigged.

This large book comes to 693 Kindle pages. Amazon provides a free app that enables those without a Kindle to read the book on their computer.

The other books in the series can be found here.

During his youth Bobby learned to swim and this was one of his main forms of exercise when preparing for the 1972 match in Reykjavik. The other sport that was a staple of Fischer’s adult life was tennis and there were numerous sightings of Bobby playing during his Candidates match with Bent Larsen in Denver.

What isn’t well known is that Bobby competed in the second annual Dewar’s Sports Celebrity Tennis Tournament at La Costa Country Club in Carlsbad, California, just outside San Diego, in early June of 1972.

We know of no other case where a world chess champion or soon to be world champion competed with sports professional in an athletic competition. Bobby was either a pretty good tennis player or very brave.

The roughly 60 athletes in the Dewar’s Sports Celebrity Tennis Tournament played doubles with alternating partners. Baseball Hall of Famer Hank Greenberg was the winner and other legends competing included basketball players Rick Barry, Gail Goodrich and Elgin Baylor, runners Marty Liquori and Gerry Lindgren, boxer Joe Frazier and football players Deacon Jones and O.J. Simpson, but it was Bobby that was the center of attention. Newspaper accounts of the time mention Barry, Jones and Baylor asking Fischer for his autograph. This is not something that is likely to be repeated!

Lubos Kavalek recalls a somewhat similar event combining doubles tennis and alternate move chess organized by Dimitrije Bjelica in Italy. Three top-level chess players were partnered with three top tennis pros: Karpov/Mulligan, Anderson/Lundquist and Spassky/Smid, with the latter winning. We do not know when the event was played. 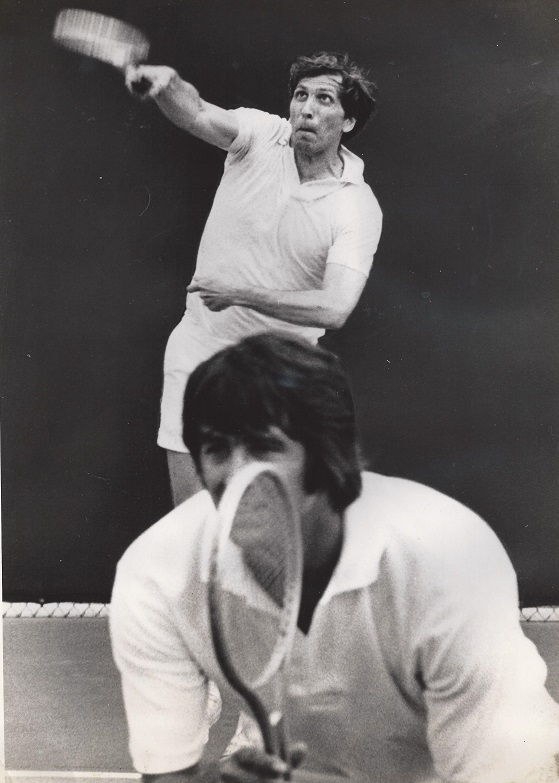 “Bobby Fischer will give a simultaneous exhibition at the Atlantic City Chess Club at the Jewish Community Center on Saturday, May 31. He will play up to 25 boards.”

We have been unable to find any confirmation this event took place and note Fischer does not mention it in the biographical section of Bobby Fischer's Games of Chess, which was published in 1959. 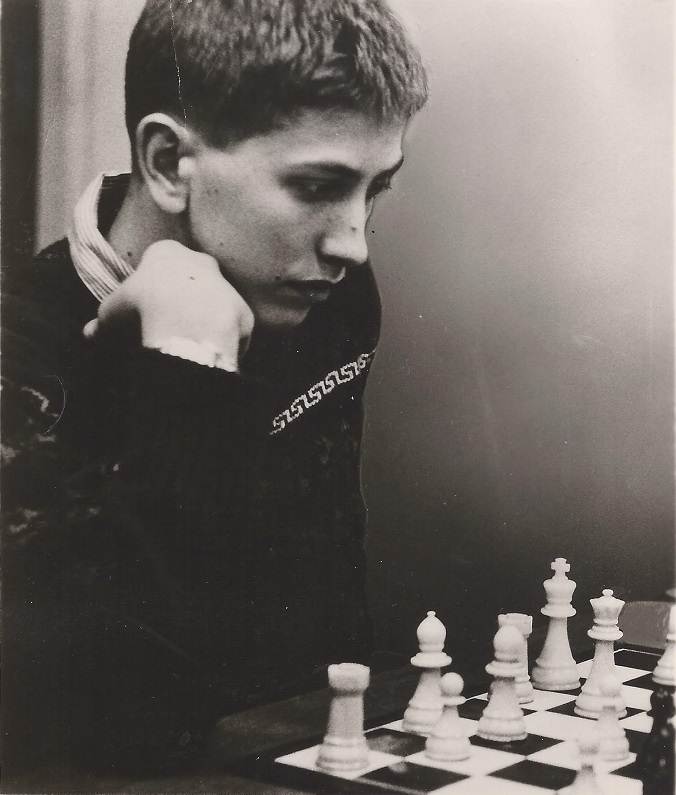 This game enabled John to tie for first in the 1968 California Open. The transposition to the endgame and subsequent heroic defense by Weinberger gives it an interesting character.

Why not 3.c4, taking advantage of Black’s move order?

An unusual move. Perhaps Weinberger is expecting to achieve via transposition the confusion of his last round opponent. The usual move order is 4…Nf6 5.Nf3 0-0, the solid line, or 4….Nf6 5.Nf3 c5, the dynamic line.

6.e5 is the continuation that deserves serious consideration.

Necessary and good; what should White do now? 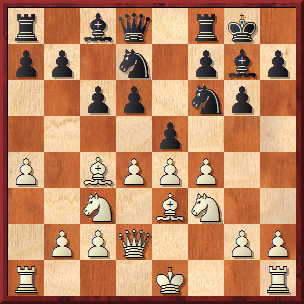 Again, I guess that most players would prefer 9.Bd3.

Black acquiesces to the queen-less endgame, because White’s pressure is too great. If 16….h6 to prevent 17.Ng5, then 17.Re7 with building threats. 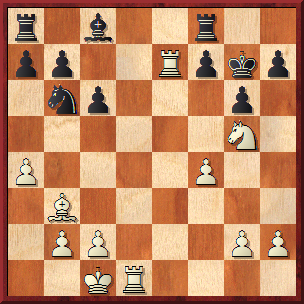 White bags a pawn, but now Black puts up a heroic defense that characterizes this interesting endgame. This is the last round!

He activates his bishop at last.

It is wise to exchange off one of White’s pile-driving rooks. 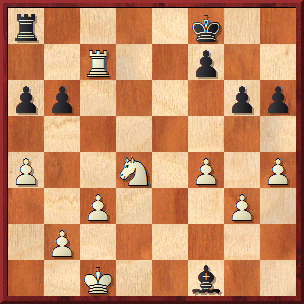 There is no preventing this strike. 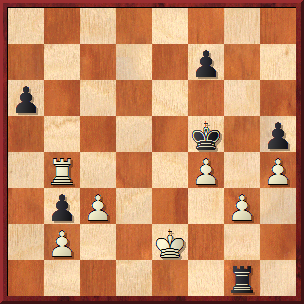 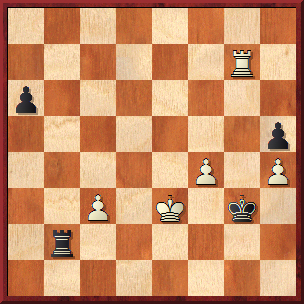 Forcing and confining the Black king to the h-file is the key to the win.

Black even goes a pawn ahead, but he cannot prevent the f-pawn from queening. 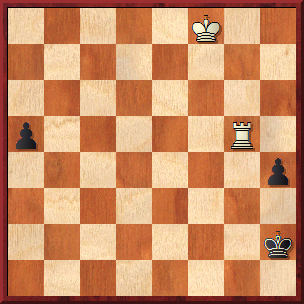 The white king will close in on the trapped black king.

Here is a study for you. It’s not too easy, and not too hard. 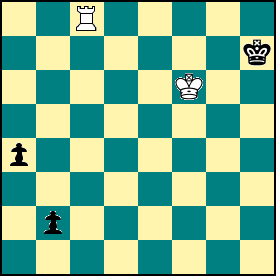 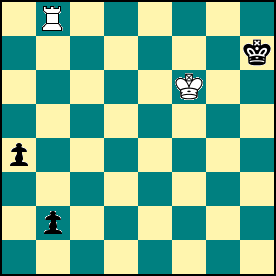 Black to move (analysis, after 1 Rb8) 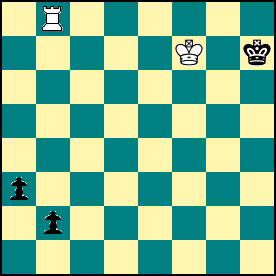 Black to move (analysis, after 2 Kf7) 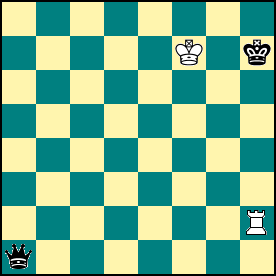 Black is mated (analysis, after 4 Rh2) 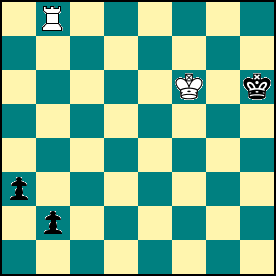 Black to move (analysis, after 3 Kf6) 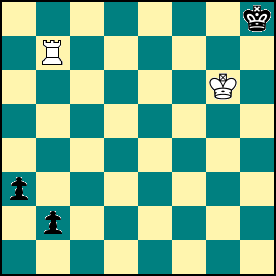 Black to move (analysis, after 3 Kg6) 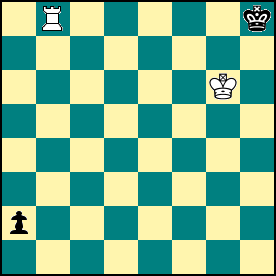 Black is mated (analysis, after 5 Rb8) 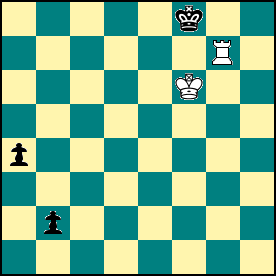 Again, the only winning move. After 3 Rg1? 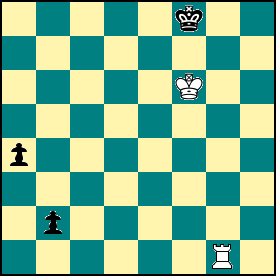 Black to move (analysis, after 3 Rg1) 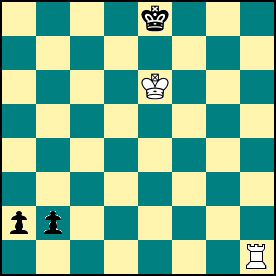 Black to move (analysis, after 6 Ke6) 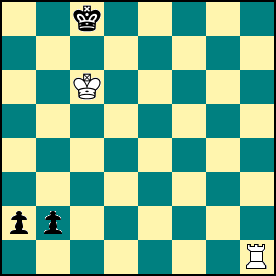 Black to move (analysis, after 8 Kc6) 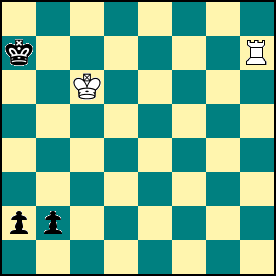 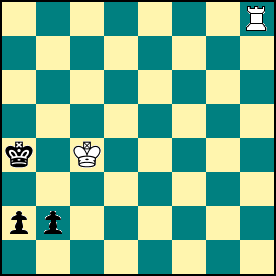 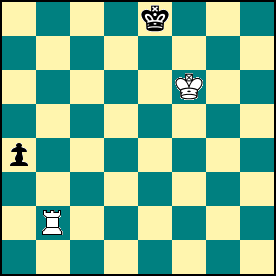 The pawns are no longer a threat.