I guess we’ll just start preparing with it. It’s hard to know the ramifications of opening developments. I guess there will be some opening developments and maybe we’ll find out that some opening lines aren’t as good as we previously thought, but I don’t think there will be huge changes. It will probably advance our knowledge of chess a bit and it will probably take many years before we get to that next level.

—Fabiano Caruana, commenting on Alpha Zero’s crushing
victory over Stockfish after just learning to play
(“Here and There” has more on this extraordinary achievement)

The Fall Tuesday Night Marathon / William Lombardy Memorial ended in a tie for first between 14-year-old FIDE Master Josiah Stearman and Expert Alexander Ivanov. Their scores of 7½ from 9 were good for $675 apiece. Tied for third, a half-point behind, were National Masters Conrado Diaz and Natalya Tsodikova.

The 143-player event, which proved to be a fitting tribute to the memory of the late William Lombardy, shattered the previous Mechanics’ Chess Club attendance of 135 set this past summer.

Several players won a large number of rating points. The big gainers, picking up 50 or more, were a mixture of juniors and veterans.

A crosstable for the event with a complete list of prize winners as well as all games from the event, can be found on the Mechanics’ Chess Club web site.

From round 9 of the Fall Tuesday Night Marathon:

Fourteen players showed up for the December 13 edition of the Wednesday Night Blitz. Carlos D’Avila won with the excellent score of 11 from 12. Fellow Expert Jules Jelinek was second at 10, followed by Na Chea and Vijay Sridharan with 7 points.

The Wednesday Night Blitz will not be held next week (December 27) but will resume January 3.

The Chess Room will be closed December 24–26, 2017 and January 1, 2018. International Master Elliott Winslow’s free Saturday classes for beginner and intermediate players will be held on December 23 and 30 from 11 am to 1 pm.

The Mechanics’ 2018 weekend tournament calendar will start on January 6 with the 18th Bob Burger Open held to honor the National Master, who is a world class problemist (composer and solver) and a noted author (The Chess of Bobby Fischer). The 86-year-old Burger, who now makes his home in Arcata, California, has been a good friend of the Mechanics’ Institute Chess Club for 60 years. 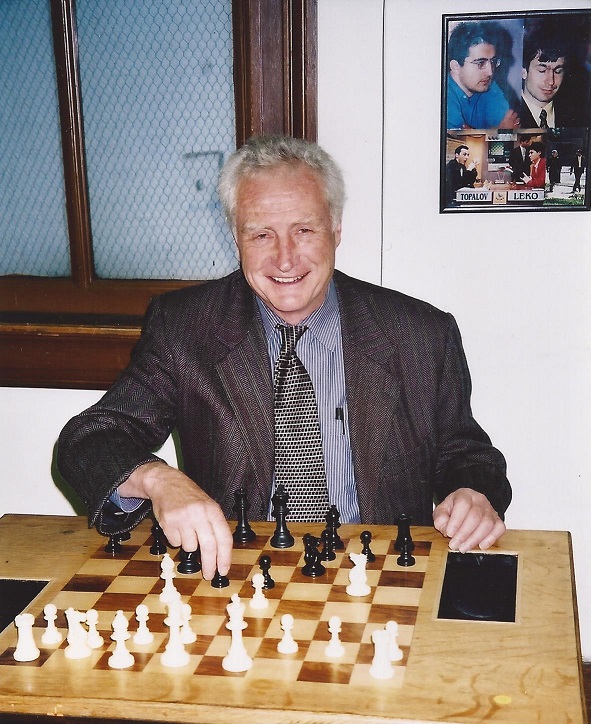 The MICC weekend schedule for 2018 is as follows:

Walnut Creek Grandmaster Sam Shankland is tied for sixth in the Sunway International in Sitges, Spain, after six rounds. His score of 4½ from 6 with three rounds to go is good for a performance rating of 2667. Follow Sam at http://www.sunwaychessfestival.com.

An exhibition game, separate from the tournament, was held as part of the jubilee to honor Bronstein with Seirawan facing off, but with a twist. Chris Mavraedis explains:

In April of 1999 at the venerable Mechanic’s Institute Chess Club in San Francisco GM Yasser Seirawan played a unique exhibition game against GM Lubomir Ftacnik. The grandmasters were stationed in separate rooms with a demo board and an audience. They then played an exhibition game with the moves shuttled back and forth by a runner. As the game progressed the grandmasters explained to their respective audiences the reasoning behind their moves and strategy. It was highly educational for the chess players who attended. In this video we see and hear GM Seirawan. It would have been great to have had a video camera in the room with GM Ftacnik for a comparison of his comments. But I only had one camera

The game, with Seirawan’s instructive commentary, can be seen here.

Here are two photos from the event. 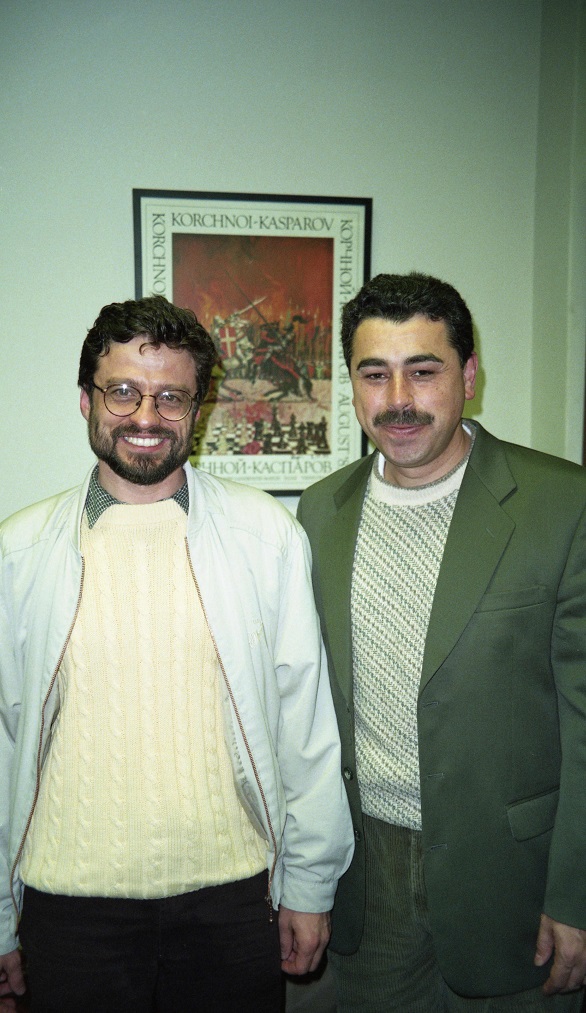 Yasser Seirawan and Lubomir Ftacnik before the start of the game. (Photo: Chris Mavraedis) 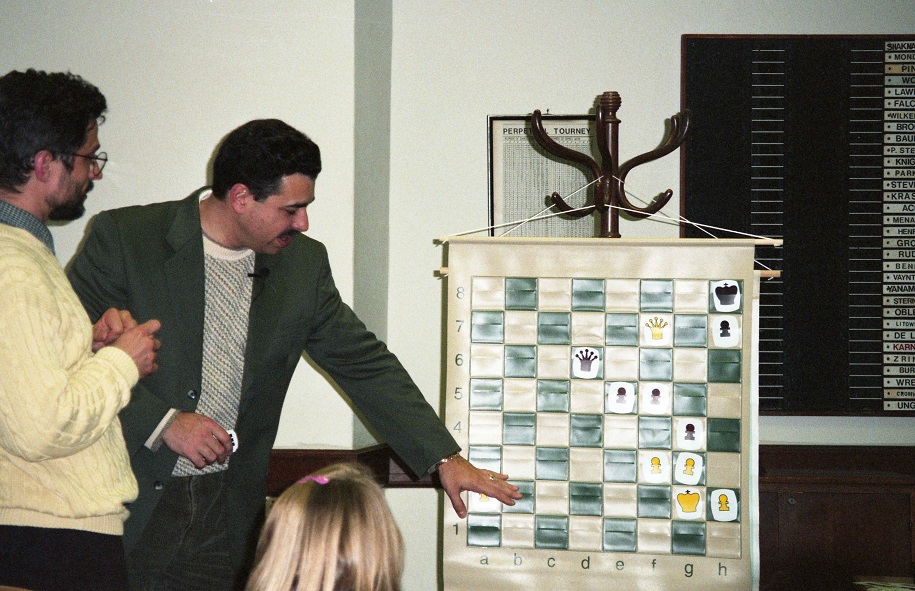 The following game has an interesting history of its development in two ways from my encounters with John.

Firstly, John kept scrapbooks of Fischer, Tal and Spassky games, and among these was the game: Spassky–Olafsson, Moscow, 1959. I recollect playing a skittles game or two copying this game when I played Black against John. There was an improvement on Black’s 20th turn that we learned about much later. It can be found in the several good books of Spassky’s games, or from an article Alan Benson wrote in The California Chess Reporter, Vol. XV, No. 6, May-June, 1966. I was still curious and selected this move against John in the Mechanics Institute Invitational of 1967, below. We did not have to travel to San Francisco for this game, playing it at John’s parents’ home in Saratoga, in sight of his library and scrapbooks.

Secondly, John and I had a tournament “war” in which I beat his Ruy Lopez with the black pieces four times, 1959–1962. I answered with a different defense each time. Such was John’s need to improve his score with this opening that all his games with the white pieces in our training match of 1961–1962 began with the Ruy Lopez. His determination to learn from me demonstrates his great will power. I won the match with 5 wins, 2 draws and 3 defeats, but John won the Ruy Lopez battle with 2 wins, 2 draws and only 1 defeat. None of these Ruy Lopez games were won directly from the opening, but from mistakes in the middle game. I never got to play the white side of the Ruy Lopez against John either before or after the training match, except in skittles or five-minute games.

Our present game was played several years after our match clashes, and it shows how much John had matured as a master chess player. I add that we both had earned the USCF Master title at about the same time in 1964.

This is an idea of Borisenko. 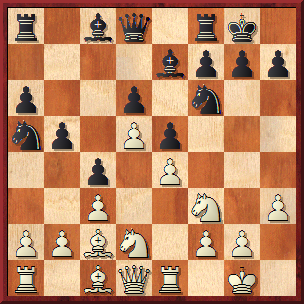 The point of the variation is active defense against the siege engine of 16.Ng3. 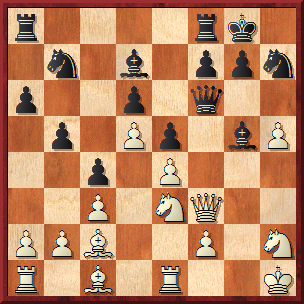 The queen trade is really forced, because the h-pawn capture is taboo. In so doing Black has to deal with his deteriorating pawn structure.

Sets up the h-pawn as a threat and spoils Black’s pawn structure. 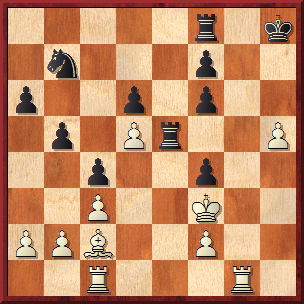 Black has counter-play on the dark-colored squares for compensation, but the White d-pawn is not yet threatened.

This is necessary in order to stifle the h-pawn.

This is required in order to get the pawn majority moving. 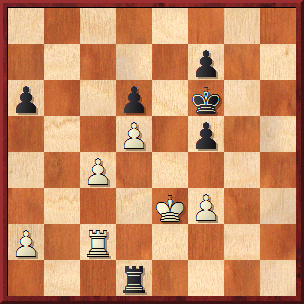 White goes for the seventh rank.

This fine square for the king could have been denied by 44….Ke5. 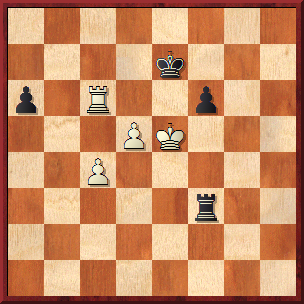 Perhaps this move can be dispensed with, but more likely it does not really matter. White’s connected passed pawns win.

It might seem hard to believe with the prices the Palace Hotel commands today, but there was a time when the Mechanics’ Institute’s nearby neighbor regularly hosted chess tournaments. These ranged from the 1961 U.S. Open (won by Pal Benko) to the 1973 U.S. Junior Closed (won by Larry Christiansen with Mark Diesen second).

A few years after the latter event the 1976 Golden Gate Open attracted 468 players, who competed for $11,500 in prize money (the equivalent of about $50,000 today). Grandmaster James Tarjan took home the first prize of $1600 for his 5–1 score. M.I. Grandmaster-in-Residence Nick de Firmian was second at 4½, and two players competing in the current Tuesday Night Marathon, International Master Elliott Winslow and FIDE Master Frank Thornally, were among those who tied at for third at 4–2 in the event, directed by Mike Goodall.

Possibly the last tournament at the Palace was the 1983 San Francisco Class Championship, held April 9–10, 1983. Mike Goodall was once again the tournament director and U.S. Chess Hall of Famer George Koltanowski was an honored guest of the event.

Newsletter #809 wrote of the noted chess historian, teacher and bookseller Fred Wilson’s move to new quarters at 41 Union Square West, Suite 718 (at 17th Street) on December 20. His old store at 799 Broadway (or 80 East 11th Street—both are correct) had a rich chess connection, as he explains.

It was built in 1854 and was the St. Dennis Hotel until 1930, when soon after the “crash” it was converted into an office building. After the owner died early this year it was purchased by the Normandy Group for one hundred million dollars. According to their website the current intention is to gut the building entirely and rebuild a new ten story modern office building in its place. I was told by an agent for Normandy that 799 Broadway was not considered for landmark status because its facade is “not distinguished”.

Still, the St. Dennis had many famous people stay here, including—of great interest to chessplayers—Paul Morphy, who stayed at the St. Dennis during the First American Chess Congress in 1857. Also, Abraham Lincoln stayed here when he participated in the famous Lincoln-Douglas debates held at Cooper Union (nearby) in 1861. Additionally, Marcel Duchamp had a studio here on the fourth floor during the 1960’s.

Also, Dr. Albrecht Buschke ran America’s first chessbook shop at 799 Broadway from 1940 to 1983. Finally, I started my chess bookshop here in November, 1979, and will have been here for almost exactly 38 years before I am forced to move six blocks uptown.

We could add the U.S. Chess Federation had its headquarters in this building from 1956 to 1967. It was here Frank Brady edited Chess Life when it made the transformation from newspaper to magazine format in 1961. Bobby Fischer used to visit 80 East 11th street to dictate his Chess Life contributions to Editor Joe Reinhardt in 1963–65. The USCF was at 81 Bedford Street prior to 80 East 11th, and moved out of the city to Newburgh, New York, in 1967.

Here are three articles to offer some perspective on the DeepMind program AlphaZero’s crushing defeat of Stockfish, after just learning how to play.

From ChessBase, comprehensive article, includes brief videos from lead scientist on the project. From The Verge. From chess.com, includes video of GM comments.

This position is from a Grandmaster game, but it was blitz, so be quick. 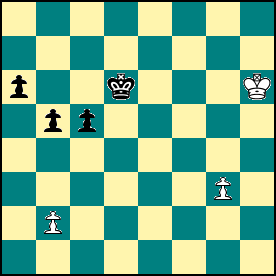 Black to move, or, White to move

In the game, the position was Black to move. Black has two obvious plans: (1) Get his king over to the kingside to stop White from promoting, then use his pawn majority on the queenside; or (2) Get the queenside pawns moving immediately, ignoring White’s g-pawn. 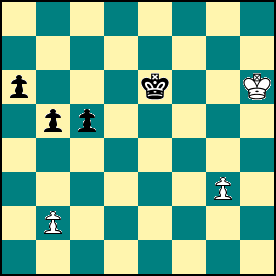 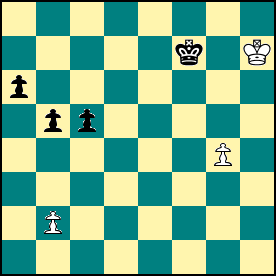 Black to move (analysis, after 3 Kh7) 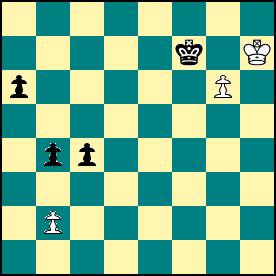 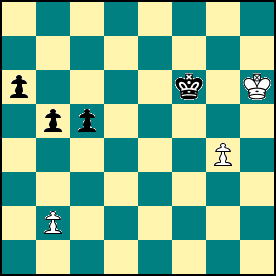 Black to move (analysis, after 4 Kh6)

So if the first plan doesn’t work, how about the second? 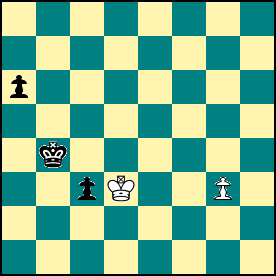 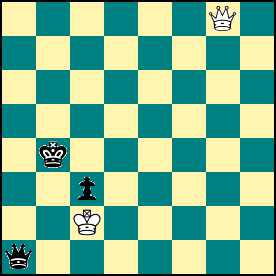 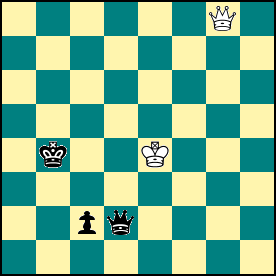 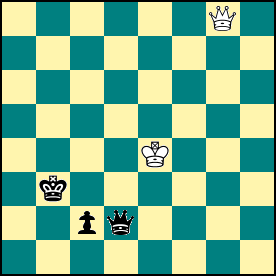 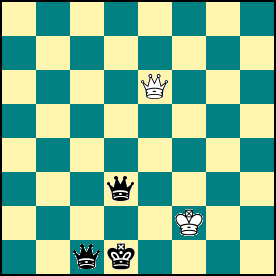 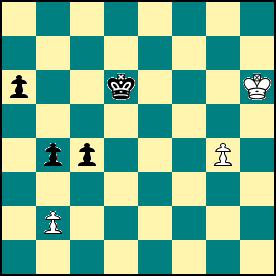 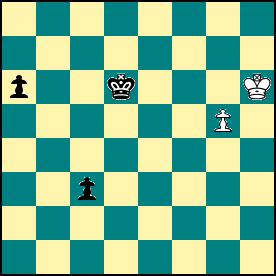 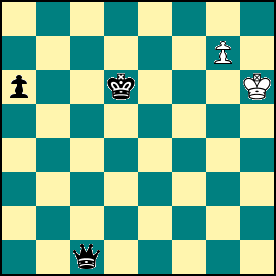 Here is the point of promoting on c1 rather than a1. White is in check, and worse yet, his king is on the h-file, and queen (if any) will be on the g-file. 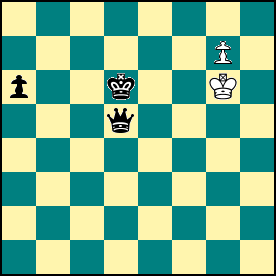 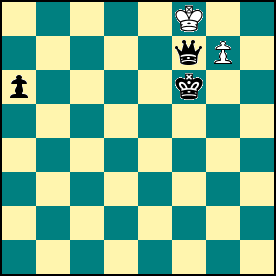 This position is from the game GM Liren Ding–GM Hao Wang, China Elite Mind blitz 2016. It appeared in ChessBase Magazine 172, where it was annotated by Karsten Mueller.