In order to beat Carlsen you need a “new Kasparov”: maximum pressure right from the opening. “Outplaying” Carlsen won’t work; you need to “tear him apart”. If that fails then he’s extremely hard to beat.

The Walter Shipman Tuesday Night Marathon started last Tuesday night. It is still possible to enter the 9-round event, which is both FIDE- and USCF-rated, with a half-point bye.

From round 1 of the Shipman Tuesday Night Marathon:

Arthur Ismakov, who has juggled between low Master and high Expert for much of his career, won the 18th Charles Bagby Memorial, held July 21, with a score of 4½ from 5. He defeated National Master Romy Fuentes in the last round to top the 33-player field. Tying for second through fifth at 4–1 were Fuentes (who defeated top-seeded Siddarth Banik), Banik and the brothers Samir and Liam Llamazares of Salamanca, Spain. Arjun Sankar, Rithwik Narendra, Daniel Perlov and Renate Otterbach won book prizes for the greatest ratings upsets in the first four rounds.

The Mechanics’ Chess Club continues to look nicer and nicer. The past two years have seen the main room and annex repainted, all the chairs replaced and every table refinished and repaired by Mariusz Krubnik, who did a wonderful job. Now the men’s bathroom has been redone. Come and check out the club.

Here is a look at what the M.I.C.C. looked like in 2006 when Boris Spassky visted. 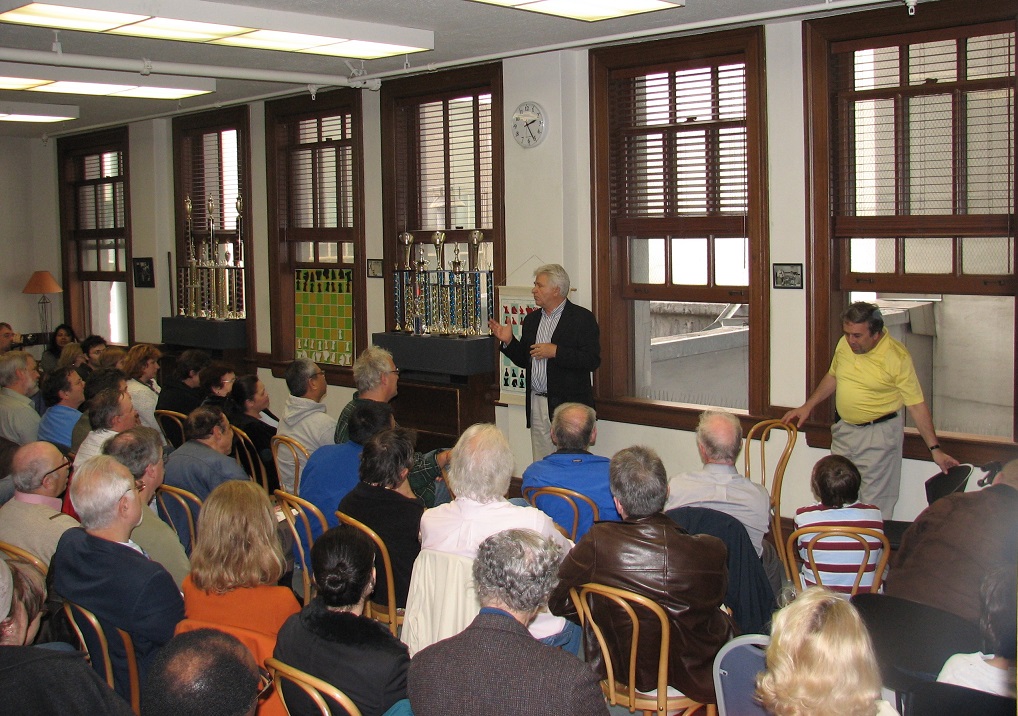 Boris Spassky lecturing to a capacity crowd at the Mechanics’. (Photo: Mechanics’ Archives)

U.S. Champion Sam Shankland of Walnut Creek recently played in an exceptionally strong tournament in China where he finished next to last, but almost won one of the top prizes. All eight participants were rated over 2700 FIDE and in the top 20 to 35 players in the world going into the event.

Sam had a 62 game unbeaten streak broken by Santosh Gujrathi Vidit of India in round three, but bounced back with a win over Polish Grandmaster Jan-Krzysztof Duda, the highest-rated player (2739 FIDE) in the world under 21.

The deciding game for Sam came in round six against Le Quang Liem of Vietnam. Here is what he wrote after the battle.

Finished Hainan Danzhou with 3.0/7. Everything was going fine until a disaster in round 6, when I spoiled an excellent position, declined some repetitions, and then one oversight meant the difference between fighting for first and fighting to avoid last. Still, as setbacks come, this one should be pretty digestible, as long as I don't have recurring nightmares about Ne5-g4.

Thanks much to the Chinese Chess Federation for inviting me, it was a real honor to play such an elite event. 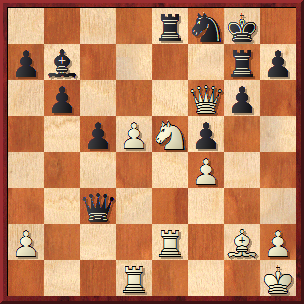 Sam will play a six-game match against eight-time Russian Champion Peter Svidler in late October in the Dutch town of Hoogeveen.

Thanks to Colin Ma for another donation of new chess books.

The 20th anniversary of the 1999 Koltanowski Memorial, an 18-player Scheveningen GM norm tournament, is right around the corner. 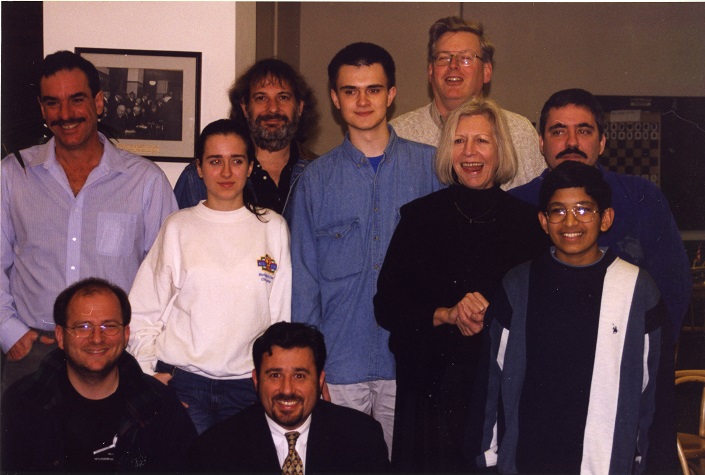 I’ve been trying to tell this story for some time. The setting is the Hall of Flowers in San Francisco. “John” in the poem is John Grefe while “Brandwein” is Stephen Brandwein—Dennis Fritzinger.

"the whales will eat tonight!"
is what steve said
after i won my last game
to take home a money prize.
earlier i had announced
my intention
of donating any money i won
to greenpeace.
"i'm playing for the whales,"
i said.
john, who heard me,
said with a grin
that he was playing for his guru.
my exasperated opponent
said something like
"how can i possibly do well?
i'm only playing for myself!"

International Master Cyrus Lakdawala has been the best player in San Diego for close to four decades, rated almost continuously over 2500 USCF since 1992, with a peak of 2597. He is also a well-respected teacher and author of numerous instructional opening monographs and game collections, primarily for Everyman Chess.

Cyrus has played many times at the Mechanics’, including the 2001 Linklater Memorial, where he made his long-overdue final International Master norm.

The following game was played in the San Diego Chess Club’s signature event, its weekly Gambito, a four-round event played with a time control of G/45. Lakdawala has won hundreds of these events.

My student Brandon played this move order to dodge the line 1.b3 d5 2.Bb2 Bg4. 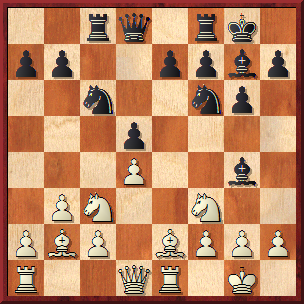 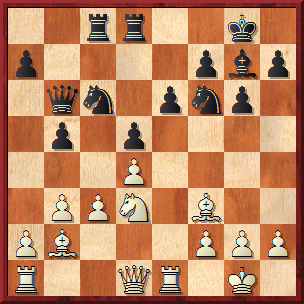 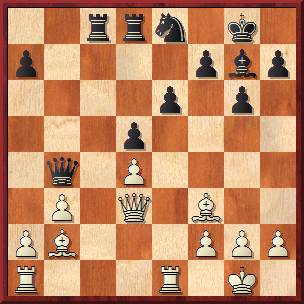 This move wastes a critical tempo. He had to try 21.Red1. 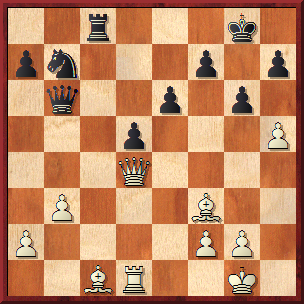 I was nervous about h6 ideas. 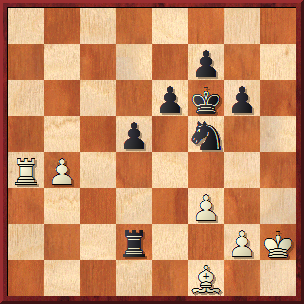 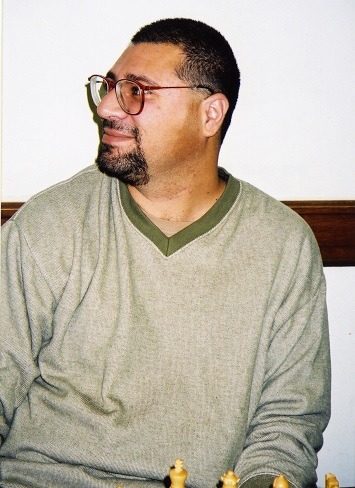 During the evening Frank Marshall, the United States champion, gave an exhibition of his skill against twenty-two of the [Knickerbocker Field Club's] members, playing simultaneously against all the club players. Up to a late hour he had disposed of all but four of the players.

Playing against twenty-two opponents in his simultaneous exhibition at the Knickerbocker Field Club of this borough, Frank J. Marshall made a clean sweep at all of the boards, allowing neither a win nor a draw to be scored against him. Captain Hopkins, who defeated the United States champion on a former occasion, was among the contestants and this time succumbed. Other prominent adversaries of the champion were Colonel Stickle and W. S. Sinclair, leader in the Brooklyn C. C. handicap tournament.

Under date of May 15 Marshall writes as follows:

"Dear Sir: I presume you are aware of the fact that Janowski has asked me to play a match this summer at Atlantic City. Such a contest would be interesting, but why not a regular tournament open to players of known strength from all parts of the country? A suitable purse could be raised toward prizes and both Janowski and myself would compete. Sincerely, F. J. Marshall"

Frank J. Marshall, the American champion, is still at his divan, 118 West Forty-ninth street, New York City. He expects shortly, however, to move to the Atlantic City, where it will give him pleasure to meet all-comers over the board.

Frank J. Marshall, who is planning to arrange a masters tournament, to begin in Atlantic City on July 5, was again the victor in the rapid transit tournament, held at the New York City Chess Club, and in which a strong field of seven competed. Marshall made a score of 5-1, losing only to Chajes, who, however, was beaten three times. J. Bernstein, with 4-2, was placed second, while D. Janowski and C. Jaffe, with 3 1/2-3 1/2, shared the third and fourth places. Other scores were: O. Chajes, 3-3; A. Gordon, 2-4; S. Stevenson, 0-6.

From a strong field of seven competitors, including the visiting French master, Frank J. Marshall, the United States chess champion, emerged winner of first prize in the rapid transit tournament at the New York City Chess Club, with a total score of five wins out of six games played. The only opponent to defeat the American champion was Oscar Chajes, who, however, was not a prize winner on this occasion. J. Bernstein, with a score of 4-2, was the winner of second prize. D. Janowski, of Paris, shared the third and fourth prizes with C. Jaffe, of this city, each having scored 3 1/2-2 1/2. Janowski was defeated by both Marshall and Bernstein, while Jaffe drew with him. Chajes had a score of 3-3.

The 1969 Monterey International was the career highlight of Tom Lux, who upset International Master William Addison. Lux appeared on the cover of Chess Life for winning the 1966 US Amateur.

Here is the crosstable for this event, directed by Ted Yudakufski, who ran a chess center in Monterey for many years.

The Russian Olympiad team for the upcoming Olympiad will be Vladimir Kramnik, Sergey Karjakin, Ian Nepomniachtchi, Dmitry Jakovenko, and Nikita Vitiugov. The 43rd World Chess Olympiad will be held in Batumi, Georgia, from September 23 till October 6, 2018. Read about the US team here.

Anyone with an interested in chess set collecting, particularly those of Staunton design, will want to attend the event held at the World Chess Hall of Fame on August 18 during the Sinquefield Cup. More information.

Here is a position from a grandmaster game. 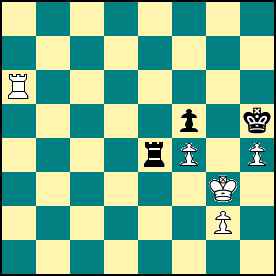 From this position, White made an error. 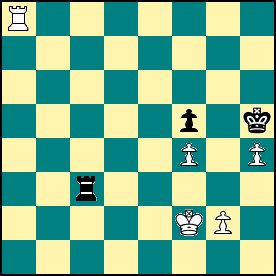 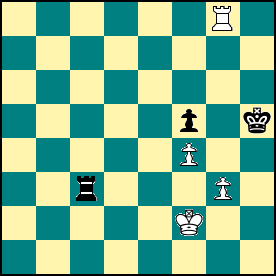 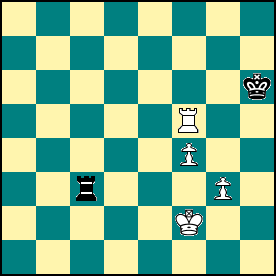 Black to move (analysis, after 6 Rxf5)

White soon found out why 1 Rf6 was wrong. 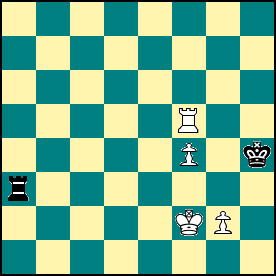 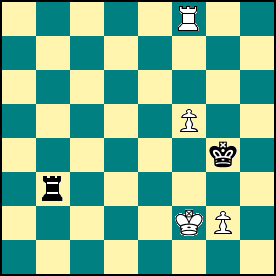 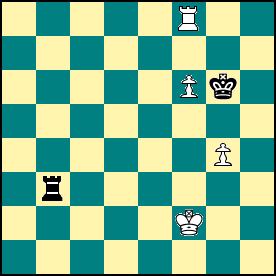 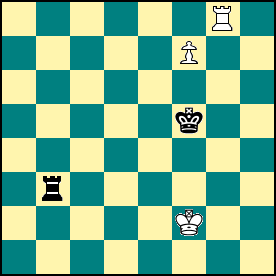 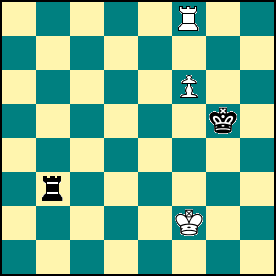 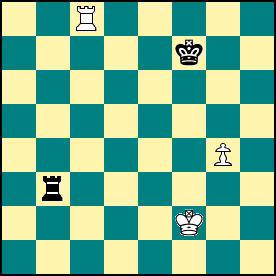 The game proceeded, after 4 g3 (diagram below) 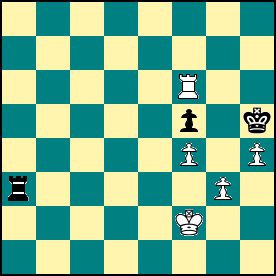 Why not just capture the rook? Because the white rook on f6 makes g6 and h6 unavailable to black king, and therefore 4 Kxf3 is stalemate. 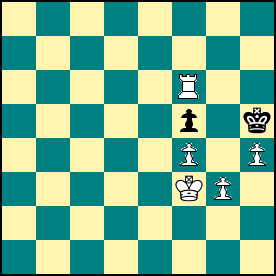 Black is stalemated (analysis, after 4 Kxf3)

It does no good to decline the sacrifice, but White tried. 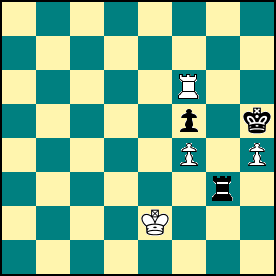 Now we have reached a theoretical draw. 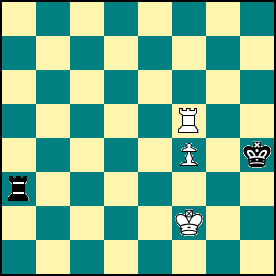 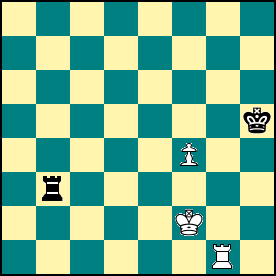 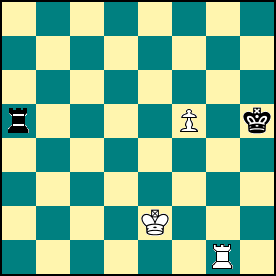 The game could have proceeded 11 Rf1 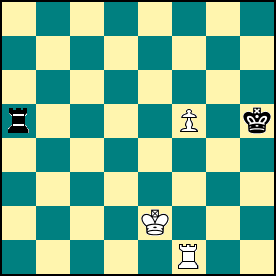 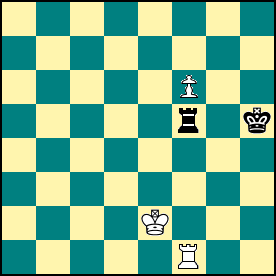 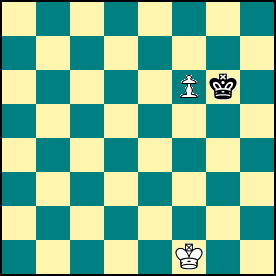 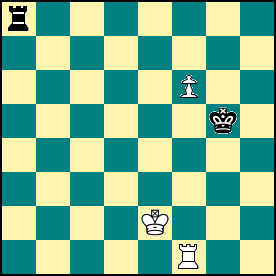