I think India… an interesting answer would be Iran, but I think they will become a force, they will start fighting for podium finishes and things like that, but to actually win the Olympiad I don’t know if 20 years is enough. But India, for sure. This generation, and I suspect the generation after it will be very similar considering the human resources they have, will be a very interesting team once they mature a little bit. All these kids who are 12, 13, 14 now, they’re not ready yet, but they will be in three, four years... The current power-houses I don’t expect to disappear, but India is the obvious team that should join the conversation.

—Peter Svidler, on who who’ll win the 2038 Olympiad. Entire interview.

From round 4 of the Shipman Tuesday Night Marathon:

The MI Wednesday Blitz returned with a bang after its summer hiatus, attracting a record turnout of 19 players to the August 29 event. Andrew Ng won with a score of 10 from 12, followed by Maxime Elisman with 9 points. Tying for third at 8½ were Conrado Diaz and Arthur Ismakov, followed by Jordy Mont-Reynaud on 7½.

US Champion Sam Shankland of Walnut Creek will tune up for the upcoming Chess Olympiad by facing French superstar and perennial world top-ten player Maxime Vachier- Lagrave in a match of 960 Chess (Fischer random) in St. Louis this September—more about this event in “Here and There”. Sam will also play many-time Russian champion Peter Svidler in a classical chess match in the Netherlands later this fall.

Boris Spassky’s visit to the Mechanics’ Institute in the fall of 2006 will be long remembered. A report on his visit, written shortly after his departure, can be found at http://www.uschess.org/content/view/6284/157. In addition to the rook and pawn ending Boris shared with the San Francisco Mechanics US Chess League team he also presented some endgame studies. The first was a deceptively simple pawn ending by Grigoriev shown to him by trainer during his world championship run, Igor Bondarevsky. 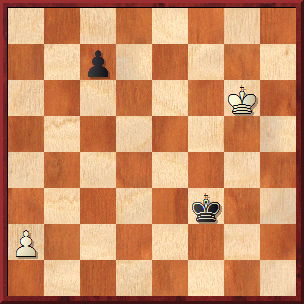 White only has one way to win. Can you find it?

The winning move which is well worth remembering. Spassky is said to have taken 20 minutes to solve this difficult study. According to Andy Soltis (Chess Life, August 2016) Spassky was so proud of this that for years afterwards he would see if his colleagues could solve it. He showed it to Bobby Fischer, who was temporarily stumped, but eventually came up with the solution.

The Mechanics’ Institute Library has over 2000 chess books and is constantly adding to its collection through purchases and donations. One recent noteworthy addition is Timman’s Titans. Published in 2016 by New in Chess, this 332-page paperback is arguably the best of the many fine books the Dutch Grandmaster has written. It contains his impressions of the six World Champions he faced (Smyslov, Tal, Petrosian, Spassky, Karpov and Kasparov), three he met (Euwe, Botvinnik and Fischer) and one whose chess set he purchased and who influenced his style (Alekhine).

Timman includes not only his impressions and memories of the greats, but also analyzes the games he played against them and some of their other important encounters. In the case of Fischer, whom he never met over the board, Timman has selected seven lesser-known masterpieces, as well Fischer–Durao from the 1966 Havana Olympiad, which features in a dream he had about Fischer. The chosen games are not completely unknown (several are given in Bobby Fischer Rediscovered, by Andrew Soltis), but were carefully chosen.

How many remember the gem Guimard–Fischer, Buenos Aires 1960? The tournament was arguably the worst of Bobby’s career, but did produce one magnificent moment against the Argentine grandmaster. 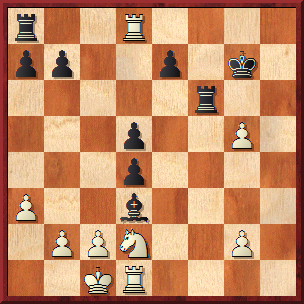 The fantastic point of Black's play. He allows the white rook to take one more time, because after the capture on c2, he will win back all the material with interest—Timman.

One of things that makes this book special are Timman’s even-handed portraits of the world champions, in which he presents them as human beings and not gods. One example is Garry Kasparov, for whom he has only the highest regard as a player. Timman writes; “In my opinion he is the strongest player in the history of chess.” His views on the man are more complicated.

The following observations suggest Garry’s board manners did not endear him to his colleagues. Yasser Seirawan expressed sentiments similar to Timman’s in his Chess Duels.

“In the 1990s, Kasparov started to develop an arsenal of facial expressions to show his opinion about certain positions. In this respect, he was the opposite of Karpov, who always sat stoically behind the board. Kasparov’s face at the board was actually an open book. He was quietest when he didn’t like his position. Then, he had no times for grimaces, and he would sit there fully concentrated, with his head in his hands. Sometimes, when he had overlooked something, he would shake his head. When he did like the position—which occurred much more often—he would start frowning and grimacing. When Kasparov played in Wijk aan Zee for the first time, he introduced the ‘grimace round’. That meant that he had developed the habit of making a round along the boards, and then displaying one grimace after the other. The other participants would always make moves that found no favor in his eyes.”

Timman’s Titans is the rare chess book that will interest a wide range of players.

July 22, Dr. Thomas First to Win from Marshall at Chess

The first game to be lost by Frank J. Marshall, United States chess champion, at his chess and checkers divan on the Million Dollar Pier, at Atlantic City, was scored by Dr. John D. Thomas, chess champion of Java, who is at present on a visit to this country. Among other recent visitors to the pier were J. Herbert Watson, ex-president of the Brooklyn Chess Club, and Dr. William C. Daly of Manhattan. Marshall is also keeping open his Divan at 118 West Forty-ninth street, Manhattan.

We received last week an interesting postal card from Frank J. Marshall, the American champion, showing him at the chess table on the Million Dollar Pier in Atlantic City. The picture also shows other chess players playing on the other boards. The Divan looks comfortable in this hot weather. We are sure chess players throughout the country visiting Atlantic City will derive much pleasure visiting the champion in his new quarters.

Frank J. Marshall, United States champion, is still in his Divan for chess and checkers, on the Million Dollar Pier at Atlantic City. He will return to New York the latter part of September. Recently, an automobile party, headed by J. E. Clock, publisher of the Kingston Freeman, and S. Bernstein, of the Kingston Chess Club, traveled 200 miles to get Marshall's opinion on a variation in a given chess opening.

During a visit to Marshall's Chess Divan at Atlantic City, Wilbur L. Moorman, of Lynchburg, Va., one of the leading Southern experts, who has been a familiar figure in this city's chess resorts during the past week, had a session with the U. S. champion, in the course of which he had the good fortune to win from Marshall, who, playing the White side of the Queen's Gambit declined, experimented with a pawn sacrifice, the main object of which was to get the Black Queen out of play. As an experiment it was worthwhile, but, against a careful defense, it should not prevail.

Yielding a pawn for the sake of drawing the Black Queen to a part of the board where her activities may be limited or, at any rate, cause her to lose time in returning to the scene of real activity. The sacrifice, however, cannot be regarded as sound.

To obtain freer action, White must now lose much valuable time, and of this Black takes full advantage.

Black’s passed pawns must decide the issue, and the sooner they get under way the better for his chances.

Clever play and the means of winding up the game in short order, 28...Ba6, instead, was less effective, and, in fact, would have been attended by more or less risk.

Again well-played and forcing in the pawn, in case White should stop for Rxd7.

SAINT LOUIS (August 24, 2018) — The Saint Louis Chess Club will bring ten of the top chess players in the world, including legendary world champion Garry Kasparov, to play in the Champions Showdown this September. The matches will be played in Chess 960 style, also known as Fischer Random, with a $250,000 prize purse. The competition will include six rapid games and fourteen blitz games over the five days of play.

“Bringing this amount of talent to an event is a tribute to Saint Louis, the chess capital of the world,” said Garry Kasparov. “People will get to see chess champions battle it out in a nontraditional and exciting format that will challenge all competitors.”

Fischer random is a variant of chess created by Bobby Fischer in the late 1990s in which the pieces on the home rank are randomized. The 960 represents the number of possible starting positions. Players will not know the order of the home rank pieces until they arrive before the start of the round and will have to rely on their creativity in rapid and blitz games.

“This format of the unknown setup presents quite the challenge for even the top players in the world,” said Tony Rich, executive director of the Saint Louis Chess Club. “We will see some of the most interesting games as this format puts these players in positions they may never have seen before.”

Play will begin at 1 pm each day, September 11–14, at the Saint Louis Chess Club, and be broadcast live on uschesschamps.com.

Here is a tricky study, definitely not what you might see in a game. 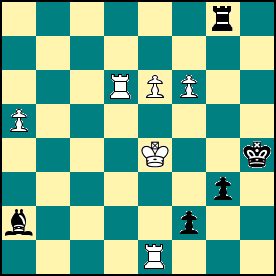 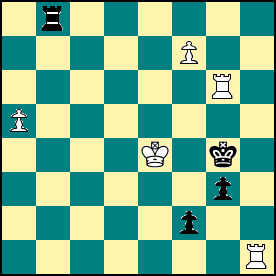 Black is mated (analysis, after 4 Rg6) 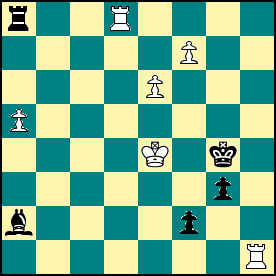 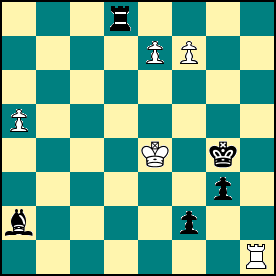 The second amazing move. You will see shortly why Black did this. 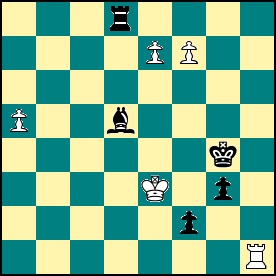 Black to move (analysis, after 5 Ke3) 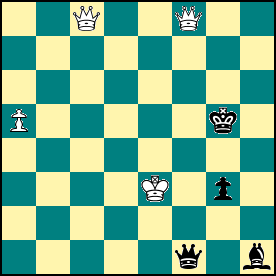 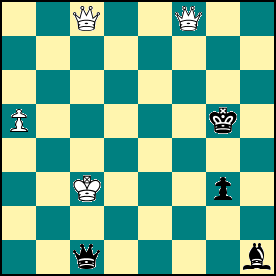 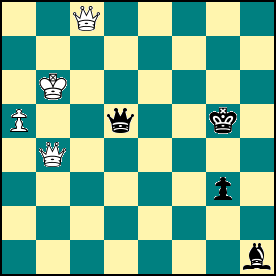 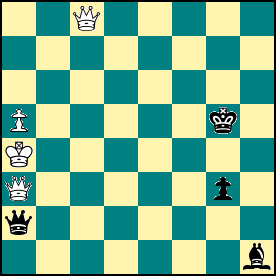 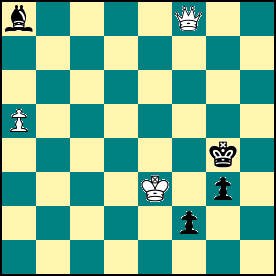 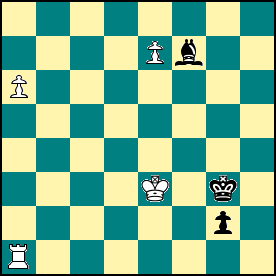 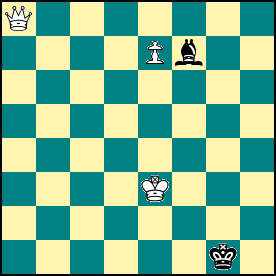 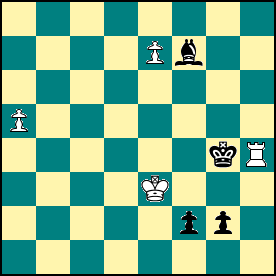 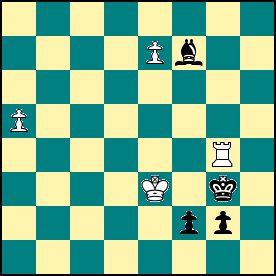 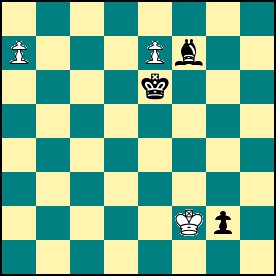 This study was composed by Geir Sune Tallaksen in 2018, winning 1st prize, UAPA 6th Sec. B1. Quoting Wikipedia (translated from Norweigan), “Tallaksen's biggest strength as a chess player is undoubtedly in the endgame, where he is considered one of Norway’s greatest experts, especially at various technical positions. Tallaksen’s ability to save difficult endgames has become even more legendary in Norwegian chess than his ability to win even or slightly advantageous positions.”

The sacs of the rooks in this study is called the Prokeš manoeuvre, after a study by the Czech composer Prokeš. There is a discussion of this and related ideas on Tim Krabbé’s web site.