In my life I have only known three chess players with photographic memories—Bobby Fischer, Bernard Zukerman, and John Hall.

International Master Elliot Winslow defeated National Master Russell Wong last Tuesday night and leads the Walter Shipman TNM after five rounds with a perfect score. Right behind him at 4 ½ is 17-year-old Ezra Chambers who recently crossed over 2300 USCF for the first time.

The Shipman has already seen more than its share of upsets and round five was no exception. Leading the way was Renate Otterbach (1098), who won her third consecutive game, defeating an opponent rated close to 500 points higher.

From round 5 of the Shipman TNM G/2 Tuesday Night Marathon:

Conrado Diaz and Jordy Mont-Reynaud tied for first with scores of 9–3 in the Wednesday Night Blitz held August 29. Fellow National Master Anna Matlin was third with 8½. The event attracted 15 participants.

Eleven-year-old FIDE Master Christopher Woojin Yoo shattered Sam Shankland’s record for the youngest state champion from Northern California by five years when he won the Labor Day weekend event held September 1–3 with a score of 5½ from 6, raising his USCF rating to 2456. IM Joshua Sheng was second at 5, followed by Senior Master Andrew Hong and National Derek O’Conner at 4½. The last, the only player to draw Woojin Yoo (in round 4) raised his rating 2340. Tuesday Night Marathon regular FIDE Master Ezra Chambers was among those at 4, and raised his rating over 2300 for the first time.

Hans just earned his International Master title, so I wanted to reach out to you and let you know, because the Mechanics Chess Club is where he started and jumped from 1000 to 2200 rating the two years before we moved to Connecticut.

Hans is a sophomore in high school now, focused on preparing for college and he also is on the high school swim team. This summer he caught a second wind for chess and earned both Grandmaster and International Master norms at the U.S. Masters; he now has his sights set on becoming a GM.

The Mechanics’ will be ably represented by US Champion Sam Shankland in the 2018 Chess Olympiad held in Batumi, Georgia, from September 24 to October 5. The United States will be the top seed (on four boards) for the first time since Haifa 1976.(some of the American teams in the 1930s would also have been ranked number one, particularly in 1937. Of course that was long before FIDE ratings were introduced.)

For a complete list of teams see Open and Women's competition. Note host Georgia is not listed yet, as they may field multiple teams if there are an odd number of countries competing.

The Mechanics’ longest-running tournament, the Arthur Stamer Memorial dates back to 1964 and many famous players have won the event, from William Addison in 1964 to Tawin Nunbhakdi in 2018. Complete list.

Mechanics’ Archivist Diane Lai found the following one page synopsis of the MI’s chess history circa 1950 that was published in the August 1955 issue of the California Chess Reporter on page 39. 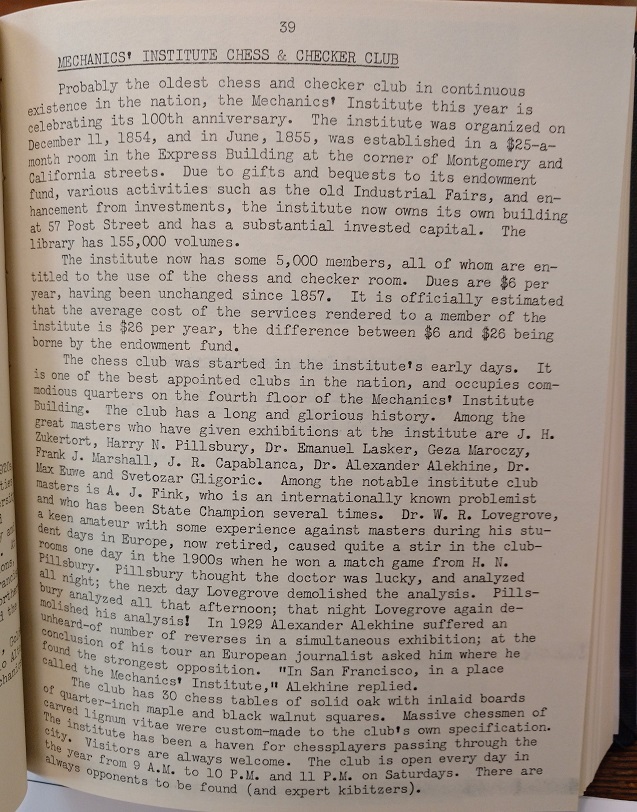 The schedule for the Tuesday Night Marathon for 2019 is now available.

Dallas Senior Master John Hall, who died earlier this year, might be the answer to the question “who is the strongest but least known player in the history of modern American chess”. Rated around 2450 USCF for much of his active playing career, Hall rarely played outside of his native Texas where he was twice state champion (1968 and 1973) and won the Southwest Open four times (1968, 1970, 1971 and 1991).

Hall was even better at blitz than over the board play and would give masters serious time odds and still consistently win money, albeit barely enough to get by even when combined with lessons and book royalties. He was living on the edge for most of his life and that was the case when he resided in San Francisco for six months in the 2000s.

Hall will be best remembered for the books he wrote for Chess Digest and Lou Hays. His Combination Challenge (1991) and Endgame Challenge (1995) are both useful training manuals, and his annotations to the Bobby Fischer complete games collection published by Hays is well done, consistently zeroing in on the key moments. 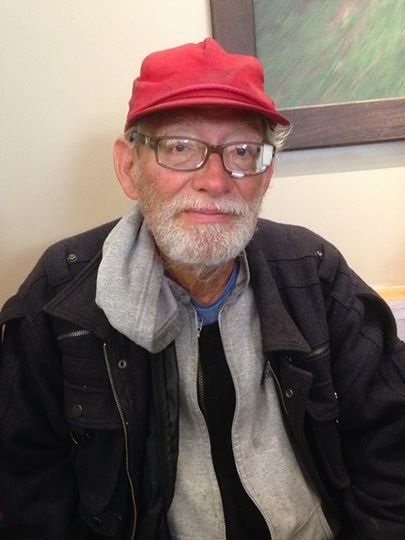 It is difficult to find games played by Hall, especially as there are players with the same name from England and Canada. The following effort, annotated by Hall in Chess Life & Review by Hall and Grandmaster Robert Byrne in his New York Times column (July 1, 1976, p. 24) is the exception. Hall defeats Kim Commons, who later in the year would help the United States take first place in the Chess Olympiads in Haifa. The game was played in the National Chess League, which was played by telephone.

Annotation by John Hall except where indicated. 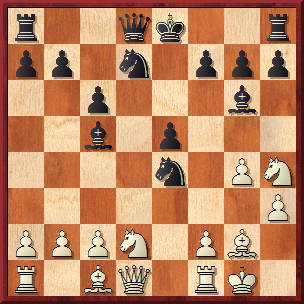 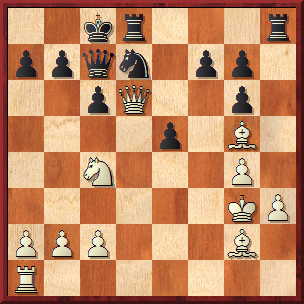 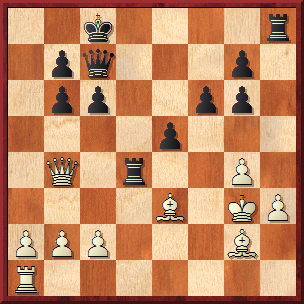 Anxious not to weaken his king’s position by 21...c5 which would be answered by 22.Qe4, attacking Black's g6, Black reacts with a rather hopeless sacrifice.

In Newsletter #834 we wrote about the Mechanics’ Chess Room register which contains hundreds of signatures by the famous (Alekhine, Tal and Smyslov among others) and the not-so-famous. Here is a key to some of the more important signatures.

Frank J. Marshall, the United States chess champion, is back from Atlantic City and will make his headquarters for the winter at Marshall’s Chess Divan, 118 West Forty-Ninth street, where he will give a simultaneous exhibition in the near future.

A consultation chess match of international interest began last night at F. J. Marshall’s Divan, when Marshall. champion of the United States, and Basil [Vassily] Soldatenkov, a member of the special Russian commission to the United States, paired against D. Janowski, the French champion, who has Charles Jaffe, the Russian expert, as his partner. The contest will probably extend over the greater part of the week. Marshall and Soldatenkov, playing the white pieces, elected a queen’s pawn opening, to which the rival pair replied with knight to king’s bishop third.

Some first-class talent got together the other day in a consultation game at Marshall’s Chess Divan, 118 West Forty-Ninth Street, Manhattan, where Marshall, partnered by Basil Soldatenkov, special Russian Envoy to America, paired off against David Janowski and Charles Jaffe. Unfortunately, play was adjourned after a hard-fought session, during which seventeen moves were recorded, but the visiting envoy was called away to Washington before play could be resumed.

Marshall and Soldatenkov played the Stonewall variation of the Queen’s Pawn Opening and, without castling, essayed a King’s side attack, which, however, was well handled by Janowski and Jaffe, who, at the cessation of play, had slightly the superior position. Presumably, the four experts will manage to arrange for another meeting, sooner or later, when a decision may be reached. The score follows:

The US has 14 players rated over 2600 FIDE on the September 2018 FIDE rating. Rank is shown for those in the top 100. Bay Area players on the list are highlighted in bold.

Outside of the World Championship the biannual Chess Olympiad is the biggest stage in chess. Although it is primarily a team event, individual accomplishment is noted, and no player better represented his country than the late Tigran Petrosian. The former World Champion scored 103 points in 129 games (79.8 percent) and lost only one individual game (on time), in a drawn rook ending to Robert Hubner in the 1972 Olympiad.

Garry Kasparov is not far behind with 64½ points in 82 games (78.7 percent), and unlike Petrosian his teams took gold in every Olympiad he played. He did lose three games. 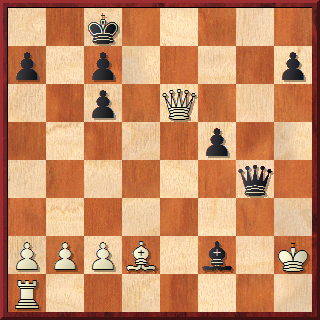 Former MI regular Chris Mavraedis writes: I thought I’d share with you an in-depth interview posted recently on the excellent Giants blog, Together We're Giants. I’d really enjoy your feedback on this interview.

See if you find the best play for both sides in this game between club players. 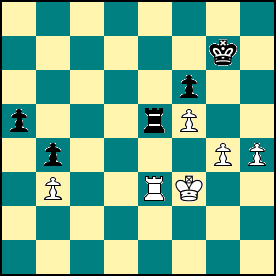 First, the winning line for White: 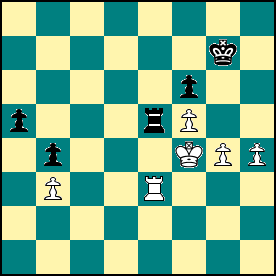 Black to move (analysis, after 1 Kf4)

What can Black do now? White is threatening to push the kingside pawns. 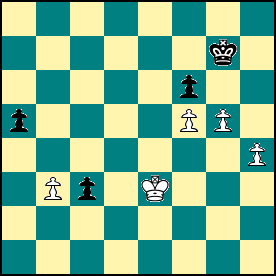 Black to move (analysis, after 4 Ke3) 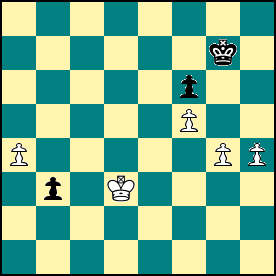 Black to move (analysis, after 4 Kd3)

The white king is close enough to stop the b-pawn. Unlike the game text (at the very end), Black’s other pawn remains blocked. 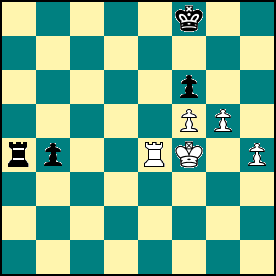 Black to move (analysis, after 5 Re4) 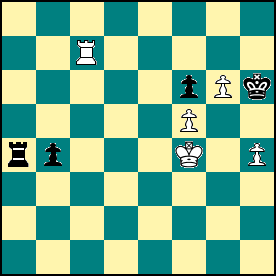 Black to move (analysis, after 8 Rc7) 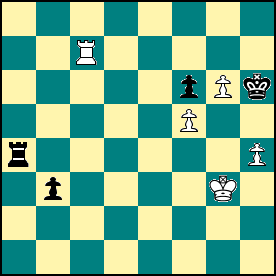 Black to move (analysis, after 9 Kg3) 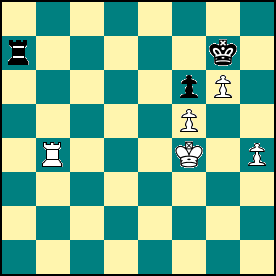 Black to move (analysis, after 8 Rxb4) 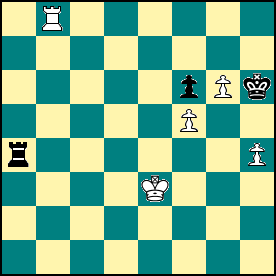 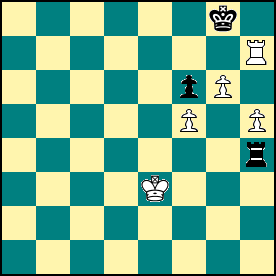 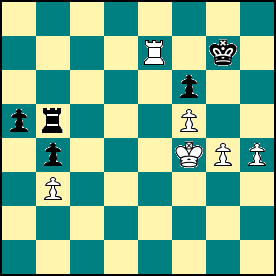 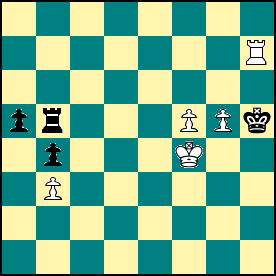 Black is mated (analysis, after 5 Rh7) 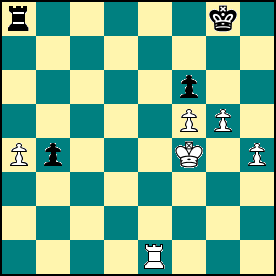 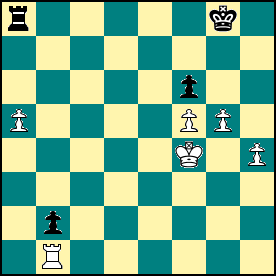 Black to move (analysis, after 8 Rb1) 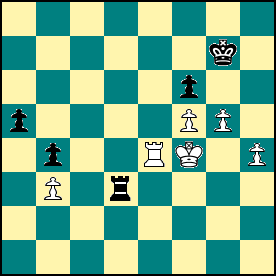 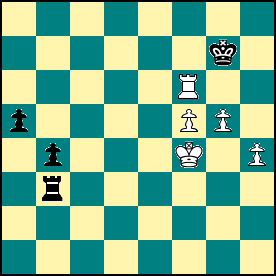 Black to move (analysis, after 5 Rxf6) 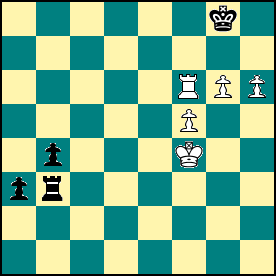 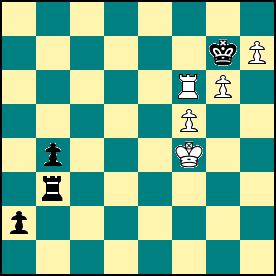 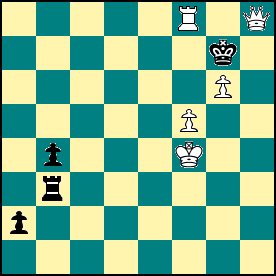 7 Rxf6 leads to the same winning position as above, except the king is on g4 instead of f4. Suppose Black tries a different strategy 7 ... Rb1 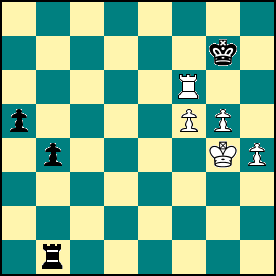 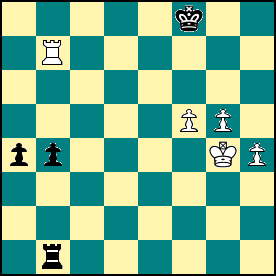 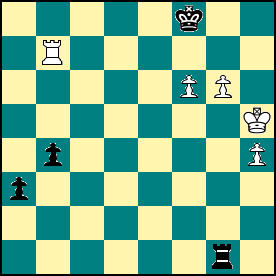 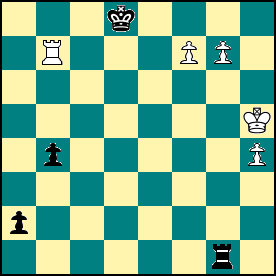 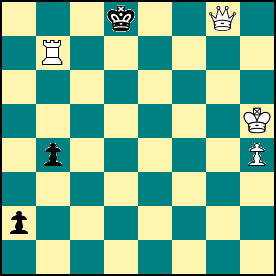 The game went instead

This blunder creates a second passed pawn for Black, and now White loses.

This position occurred in the game Serperi–Otterbach, round 3 of the Walter Shipman Memorial TNM. It was also featured in the tactics section of Newsletter 839.