The Mechanics' Institute Chess Club hosted what is arguably the strongest collection of players ever to step foot into its hallowed room for one event. 37 titled players, with 13 GM's, including world #2 GM Fabiano Caruana came out for the 2019 Mechanics' Institute Rapid Championship, which was held in partnership with Chess.com, Twitch, and the PRO Chess League. 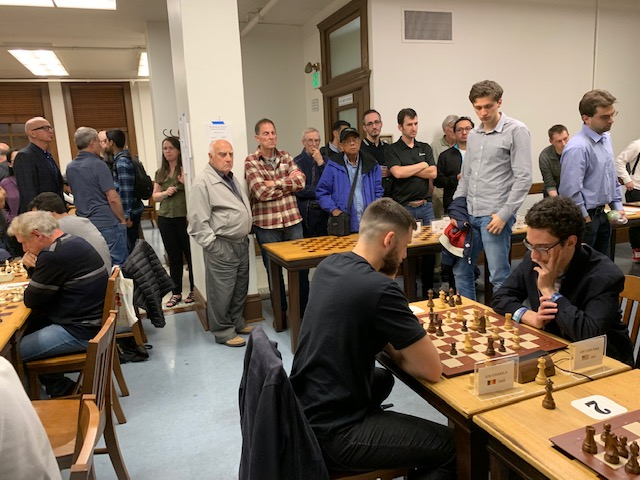 There was a steady crowd always observing the top boards

With a strong group of players in town for the PRO Chess League finals, and many chess personalities in town, conditions were ripe for an explosion of talent. A very strong field had already committed to playing the event, but when GM Sam Shankland, GM Cristian Chirila, and GM Fabiano Caruana joined the field, everyone else signed up to be part of the action within a 24-hour span. The result was an electric atmosphere and a packed house full of players and spectators. After 5 hard fought rounds, Caruana, GM Jon Ludvig Hammer and GM Georg Meier tied for 1st with 4.5/5, and are all co-champions of the inaugural club rapid championship. 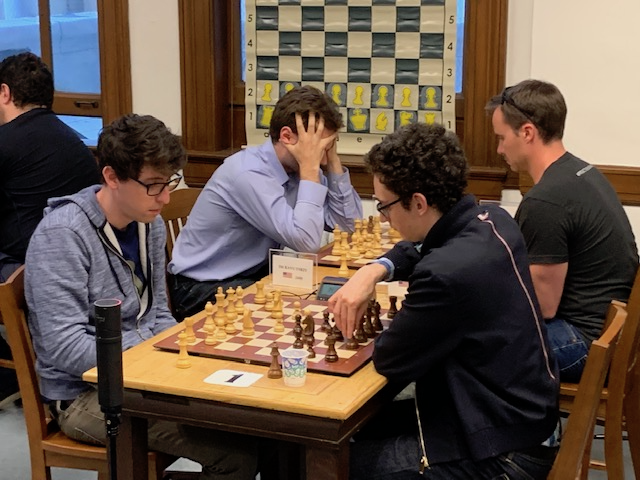 What made the event even more special is that it was an all-star cast of widely known names along with MI club regulars. Popular names like GM Sam Shankland, GM Robert Hess, GM Zviad Izoria, IM Greg Shahade, and IM Daniel Rensch were playing in the same section as FM Kyron Griffith, IM Elliott Winslow, Felix Rudyak, and Cailen Melville. We also had some of our top young talent past their bedtime to not miss this opportunity to play against the best in the world. The country's top 11-year-old NM Eric Yuhan Li made his mark on the field, finishing with 3.5/5, which tied for 8th with GM Shankland, GM Zierk, and GM Alexander Donchenko. NM Rui Yang Yan, the nations #3 11 year old scored a win against an IM. 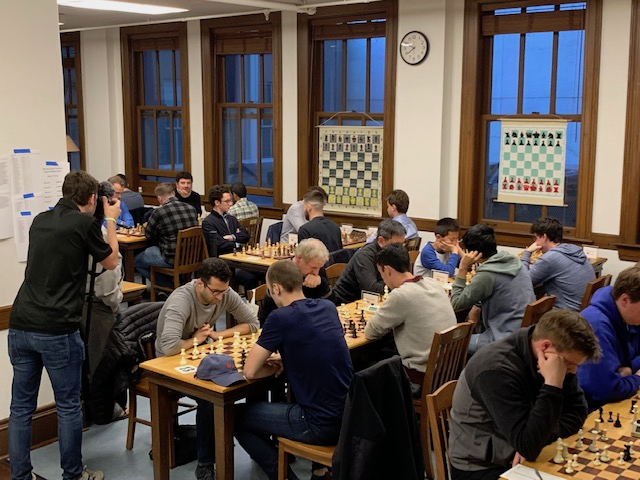 Because the event attracted so much interest, Twitch carried our live broadcast on their main chess channel, which gave us a huge audience. GM Nick de Firmian and FM Paul Whitehead provided live commentary as we streamed, and we broadcast the top 10 boards on the club DGT boards. One of the best moments of the evening is FM Paul Whitehead interviewing Fabi in the broadcast room. 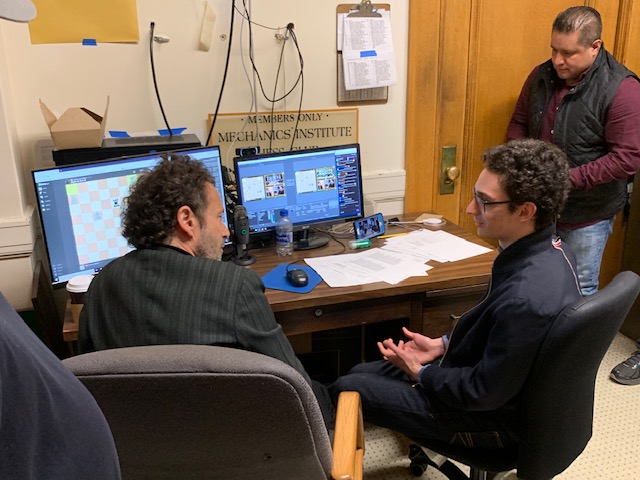 After 4 rounds, only 2 players were undefeated, Caruana and Hammer, and they dueled it out to a tense and fierce fight with seconds left on both players clock. 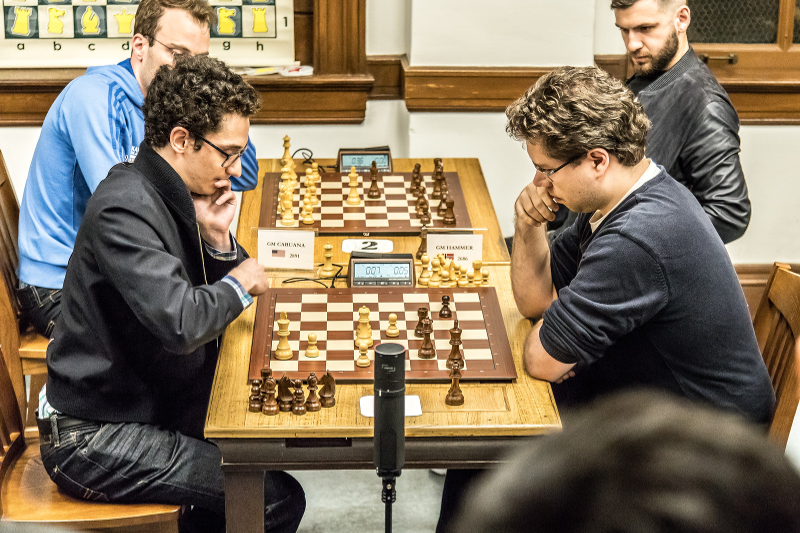 In the end, both players agreed to a draw, and after Georg Meier defeated Chirila, there was a 3-way tie for first.

In the under 2000 section, unrated Asa Witt took down a 24 player field with pretty strong names like Kristian Clemens and Sos Hakobyan.

To read the USCF recap of our amazing event, follow this link: https://new.uschess.org/news/star-studded-rapid-mechanics/

PGN's of the top 10 boards for all 5 rounds can be found on the chess club home page: https://www.milibrary.org/chess

Thursday May 2, 2019 was truly an amazing evening at the MI chess club, a night of chess that had it all; the worlds top players, club regulars, live broadcast, and a fun atmosphere that was truly a celebration of chess. What made this evening even greater is the behind the scenes knowledge of how the event came together, as it shows the value of long lasting relationships, the power of positivity and the ability of the chess community to rally together when something amazing is about to happen. Here is the true-life story of the 48 hours leading up to the event.

It all started when the Danny Rensch Nick Barton, E-Sports Director at Chess.com that the PRO Chess League finals were going to be held in San Francisco, contacted me and if we would like to collaborate on the championship weekend festivities. I thought it would be great to collaborate, and I saw what we were starting to do with our streaming as a natural and good fit to partner, especially also that we helped host the SF Mechanics team. I had proposed holding a rapid event and maybe a simul. Later I was told that ideally we would have a rapid event Thursday evening May 2, and a simul during the day on May 3. They eventually told me that GM Jon Ludvig Hammer would be in to play the rapid event and GM Eric Hansen would play the simul.

That was the only big name player I was told about, so I figured I better reach out to my contacts in order to make this a great event. So I texted people I knew and worked with previously; GM Izoria, GM Zierk, IM Kavutskiy, NM Aleskerov, all agreed to participate on the spot. I reached out to other contacts that all agreed to play. With about 48 hours before the event, I reached out to GM Sam Shankland who also joined in, and I thought we had a great field and we would all put on a great show.

Early Wednesday morning I received a text from a good friend of mine, GM Cristian Chirila, who said he would be in town and we should grab lunch. While we were discussing availability I mentioned that tomorrow I'd be running a big rapid tournament. When he inquired about the start time, I told him he should play and that it would be fun.

Cristian was Fabiano Caruana's second in his world championship match with GM Magnus Carlsen, and I knew Fabiano would be in town because he was part of the St. Louis Arch Bishops team playing in the final. I figured they would be staying together or at least hanging out together, so I asked him if Fabiano would be interested in playing. Within 30 minutes, I found out both were in. I knew this would take things next level, so we announced the updated lineup on Facebook.

What happened next was unbelievable. Once it was known Caruana and Shankland would be playing, everyone wanted in on the action. I received emails and texts from titled players for the next 24 hours. Robert Hess and Eric Rosen wanted in. I was later informed that the Baden Baden team (3 GMs and a WIM) wanted in. I got texts from several local players wanting to play. In the end, we accommodated 72 players and had to turn away about another 20. What was originally going to be a small event with a top GM turned into a memorable evening with a marquee event that will always be remembered.

I was motivated to write about this not just because of the extraordinary circumstances that made this happen, but because it made me reflect on the personal friendships and relationships that had been built over several years that no doubt played an important role. The players who I knew came out to support me when asked, and I would like to think I did the same when I worked with them. They would have come out and played if it ended up being a small event no one knew about. My good friend Cristian Chirila no doubt told Fabi this would be a good event to do in no small part to our friendship. All these personal connections came together to create a buzz that spread like wildfire, and sparked the energy that was very apparent to everyone in the room. And lastly I was assisted by my good friend Judit Sztaray in directing the event, and it was a joy watching the broadcast after to see just how much running around we do during an event.

Thank you to all my friends and supporters for giving the Mechanics' Institute another story to tell in its glorious history. Last Thursday night for me was the type of thing that makes life beautiful and fulfilling.

The Tuesday Night Marathon heads to the final round this week with NM Conrado Diaz in control of his fate as he pulled off a win against FM Andy Lee. He now heads into round 8 with a full point lead with 6/7. 5 players remain a point behind; FM Josiah Stearman, IM Elliott Winslow, NM Tenzing Shaw, FM Ezra Chambers and NM Eric Li. 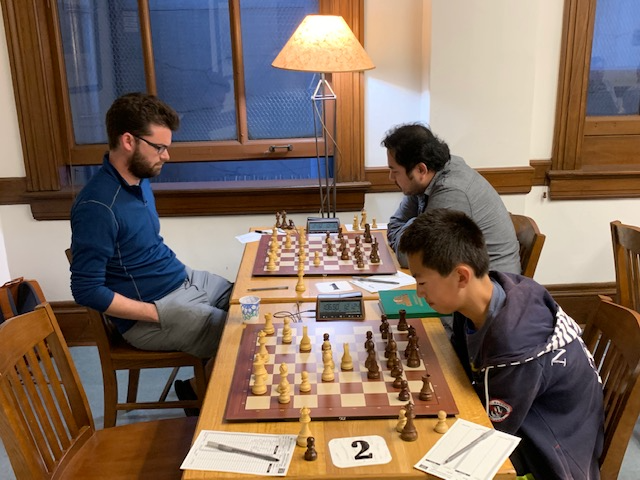 In the A/B section, William Gray and Kristian Clemens are tied for 1st at 5.5/7, but will both be paired with opponents right on their heels at 5/7 in Kevin Babb and Jonah Busch respectively. In the under 1600, Charles James and Susheel Khamkar try to finish strong with their 6/7 score.

We will update the final results in the newsletter coming out this Friday.

In 1983 I followed a lass to Ireland, and ended up spending six months in that beautiful and wild country. Incredibly, with a FIDE rating of 2370, I found myself to be the top player North and South and went on a bit of a tear, winning all six tournaments I played in, including the City Championships of Derry, Belfast and Dublin!

The 1983 Irish Championship was held in Castlebar, way out in the West, and won by Ireland's top-ranked player at the time: Davey Dunne.

I wasn't allowed to play of course, but was made to feel a part of the event: I gave a lecture and a simultaneous exhibition of 20 boards, the result of which is lost in the sands of time...

Most amazingly to me in retrospect is the strange fact that I played a blindfold simul of 3 games, all of which were recorded. I'm not sure I could play even one game today without dropping dead from exhaustion, but hey, I was 23 and didn't know any better! 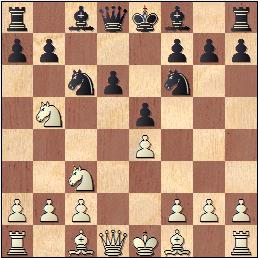 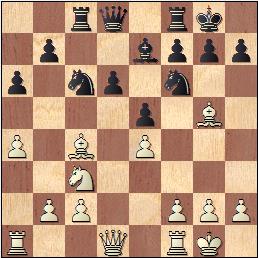 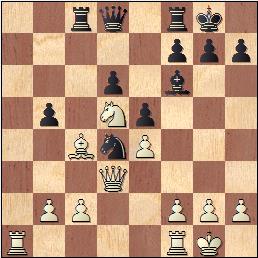 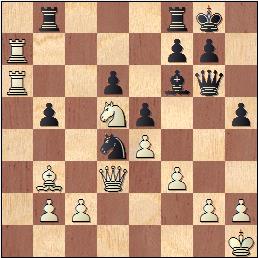 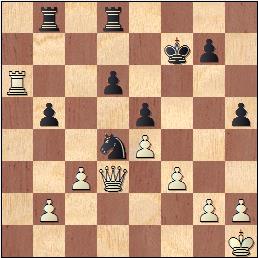 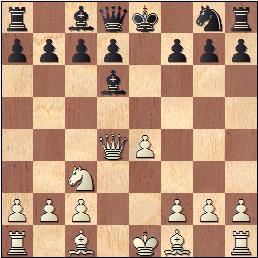 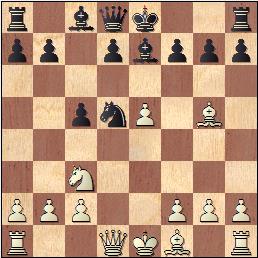 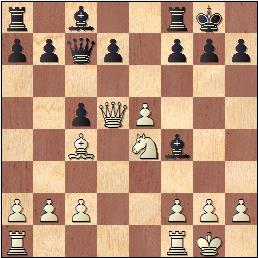 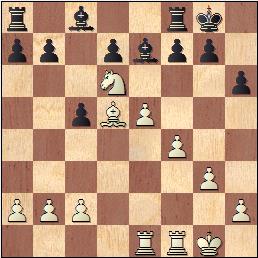 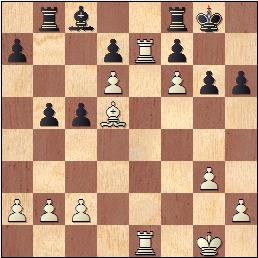 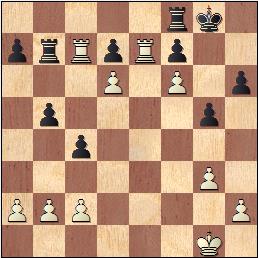 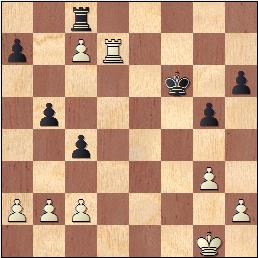 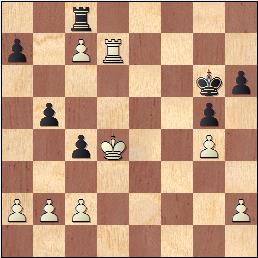 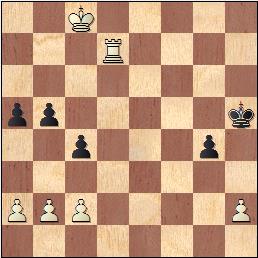 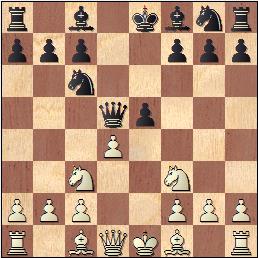 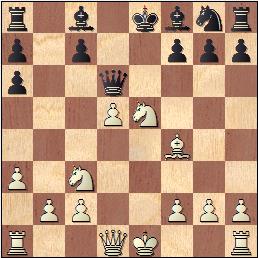 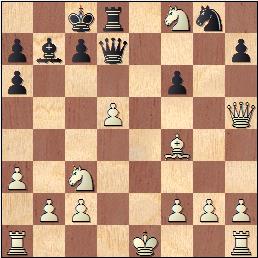 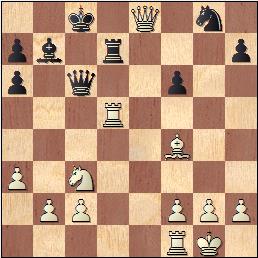 Owen's Defense is an uncommon opening that seeks to pressure White on the long light squared diagonal. This attacks the e4 square and seeks to reach down to g2 with possibilities of material gain or an attack on the white king. The downside of this plan is that White can occupy the center with both the e and d pawns, which will restrict Black's activity if the center remains strong.

The opening is named after the English vicar and strong 19th-century amateur chess player John Owen, who used it to defeat Paul Morphy in an informal game in London 1858. The opening is not regularly used by grandmasters today, but Magnus Carlsen and others have used it in quick play games. Since the theory of Owen's Defense is less developed that other openings it can be attractive to surprise opponents who will be ill prepared and be forced to think for themselves. 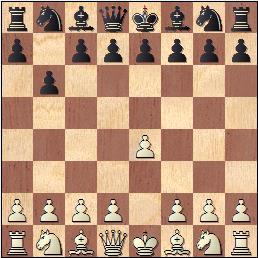 Black fianchettos the queens bishop to attack the e4 pawn and pressure the long diagonal. This is an excellent place for the light-squared bishop and the pressure can go through the whole length of the board throught to the kingside, where White usually castles. 2.d4 Note that White usually plays both e4 and d4, so Owen's Defense can be played against 1. d4 as well. 2...Bb7 3.Nc3 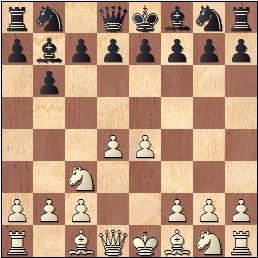 The most natural move, developing the knight to its usual square and defending the e4 pawn. 3...e6 4.Nf3 Bb4

Black makes use of the opportunity to pin the white knight. This is the one drawback to 3. Nc3 as Black can develop with a threat to win the e4 pawn. 5.Bd3 Nf6 6.Qe2

This is better than 6. Bg5 h6 when White would have to trade the dark squared bishop on f6, or 6. e5 Ne4 when Black has succeded in creating counterplay in the center. 6...d5!

Black has equal chances as the light squared bishops will be traded. There is no problem of being cramped after the exchange of two minor pieces each. *