It was a fun and exciting weekend in San Francisco December 20-22, as the first ever IM John Donaldson Championship was held to commemorate the many years of service of John Donaldson to chess community, as Mechanics’ Institute Chess Director for 20+ years, Captain of the U.S. Chess olympiad team, and chess historian. He even showed up for the Saturday morning round and played a game! It was great to have him join the weekend festivities. While the mood was upbeat and spirited, the chess action was intense. The drama of the chess action was captured through our live commentary of the event, with FM Paul Whitehead covering Saturday’s rounds and GM Patrick Wolff and FM Jim Eade covering Sunday. The final round featured a special guest commentator, NM Derek Wu, who showed himself to be a natural on the broadcast, and we hope, a regular future commentator for Mechanics’ events. 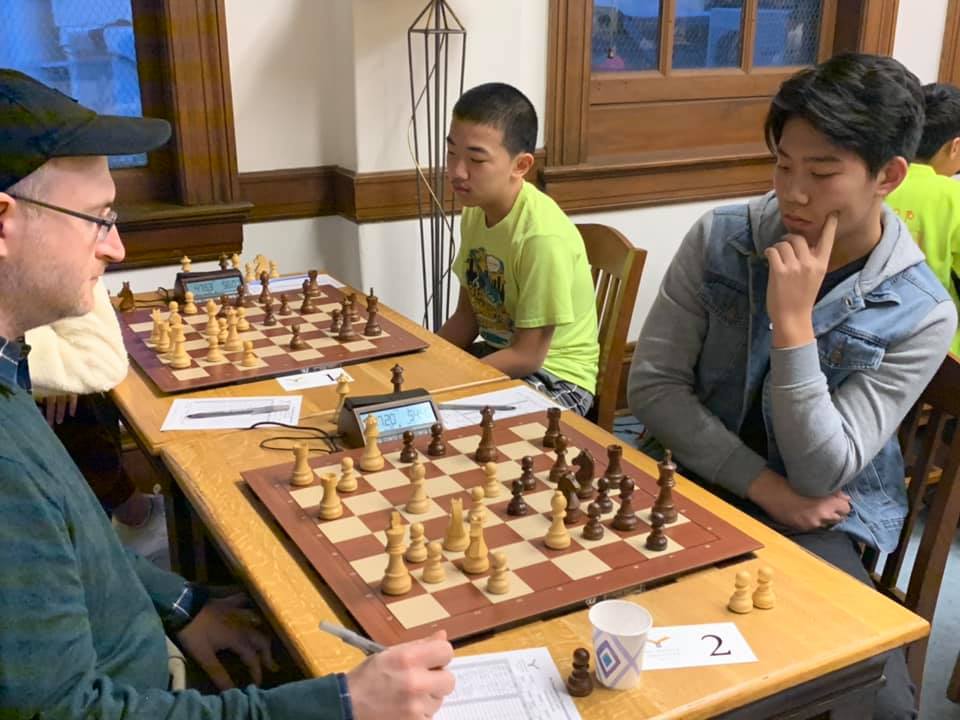 FM Jason Liang ponders a move on board 1 against Rochelle Wu, IM Ray Kaufman (white) on board 2 battles NM Derek Wu on board 2 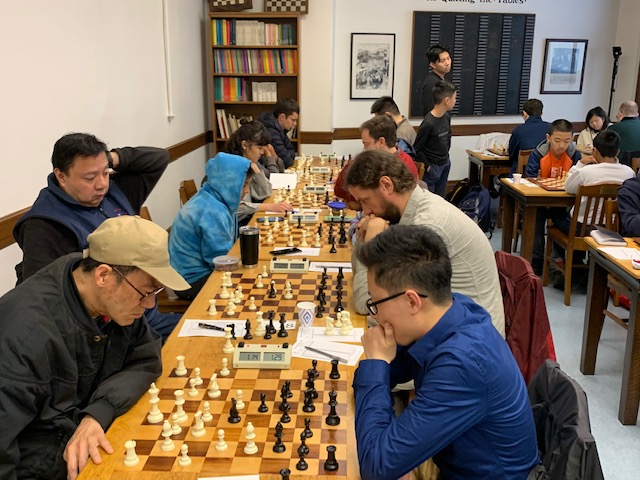 67 players came out for this 5-round FIDE rated event. The open section was strong, and the games were action packed. When the smoke cleared, FM Jason Liang and WIM Rochelle Wu tied for first with 4/5 after both scored big final round victories. Both overcame early round adversity, with Liang suffering a 3-day first round defeat to the rising John Canessa. He re-entered the 2-day and was cruising before losing to Rochelle in round 3. He was able to finish strong though, defeating IM Ray Kaufman in the final round to grab a share of first.

Rochelle won her first three games before suffering a loss in round four to Kaufman. However, she played attacking chess in the final round and defeated John Canessa.

One of the most exciting games of the day was in round 4 between NM Derek Wu and John Canessa. This game even had the broadcasters guessing as to what was going on. In time pressure and with much on the line, Derek played a move that on first sight seems like a great tactical shot, only to allow Canessa to overcome a -9 deficit by delivering a beautiful tactic of his own. Rochelle avenged her brother’s defeat in round 4 with some beautiful tactics of her own. 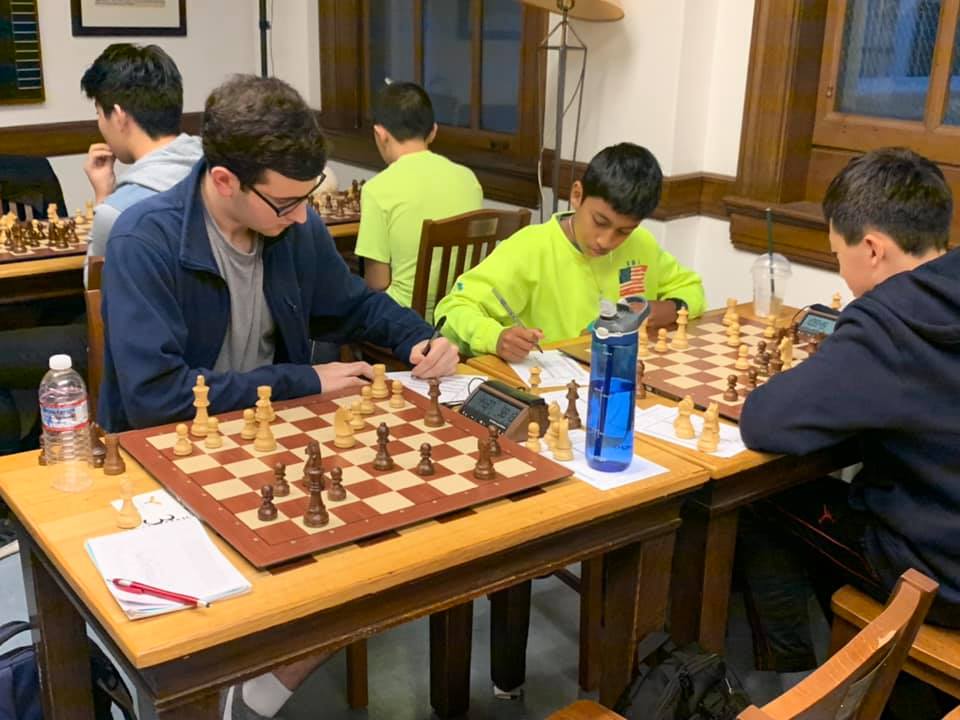 In a combined A/B section, Calvin Koo took sole first with 4.5/5, a half point better than Zolb Lkhagvasuren. There was a 4-way tie for third between Uranchim Nyamdorj, Brice Huang, Rithwik Narendra, and Max Hao at 3.5/5. 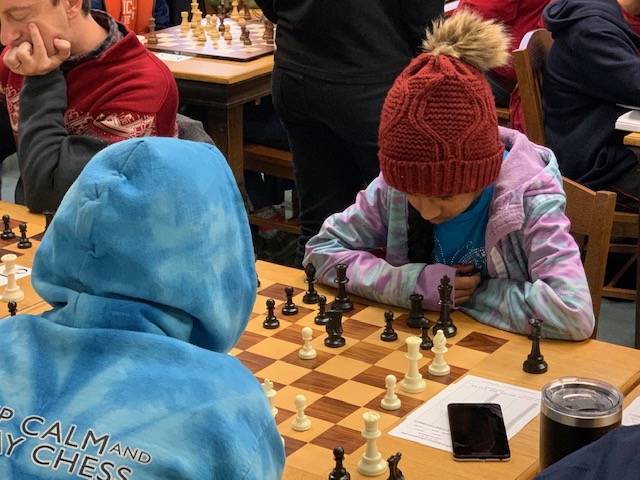 The C section was won by Brian Fong with 4.5/5, a clear point better than Ethan Mei, who took second place at 3.5/5. Club regular Albert Starr took third place with 3/5 after a final round draw with John Chan.

In the D/E/unrated section, Wentao Wu and James Lin both finished with 4.5/5 and tied for first, with their half points resulting from a draw against each other in round 2.

It was a joyous weekend at the Mechanics’ Institute, as players played fiercely and had fun in between rounds. Before the start of round 5, players were in the club playing some blitz, and even GM Patrick Wolff came out and played a few games. Players seemed to especially enjoy the broadcast of games inside the room and the live commentary. Our goal in bringing live broadcasting of games and commentary is to bring the chess community together with Mechanics’ through chess and showcase our games to the chess community in general. We are very happy to see many viewers tune in to our events, and players commentating on their own games during the broadcast. 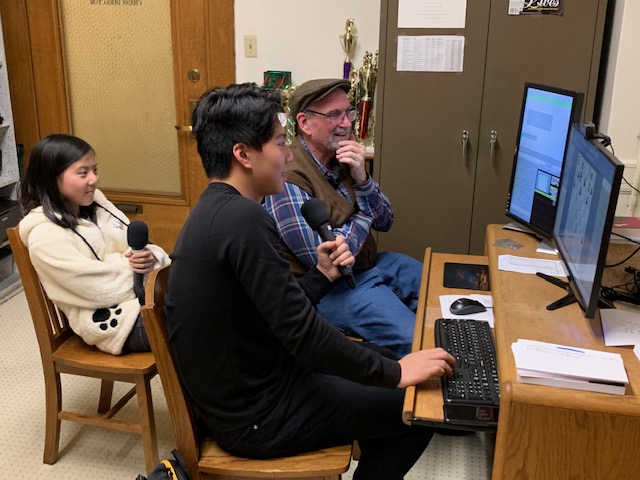 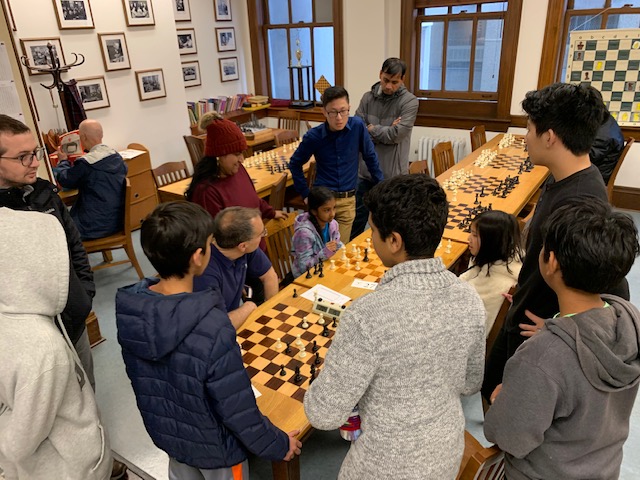 GM Patrick Wolff plays some casual blitz before the start of round 5. It was a fun and relaxing weekend of chess

To re-watch our live broadcast of the inaugural Donaldson Championship, please follow these links:

When I played chess as a teenager, many tournaments had brilliancy prizes. These prizes went usually to a player that won a very interesting or beautiful game, that was well played and often had an exciting attack or tactic or involved some sort of drama and tension during the game. This prize was in addition to the normal tournament cash prize and would often be in the form of an item like a chess clock. What we would have to do is turn in our scoresheet at the end of the game and write “brilliancy” on it. It would then be evaluated by a master and judged accordingly.

Kenn Fong recently sponsored a brilliancy prize for the recently concluded McClain Memorial. The prize was $100 to be divided $60/$40 for 1st and 2nd. The only problem is that it seemed many were not very clear on the spirit of the prize, as we only received 3 submissions. 2 of them were from players who lost and the other was from a player victorious over another 600 points higher. We did not think this fit the criteria of a brilliancy, so with permission from the donor, we will roll it over to another event.

Players, if we announce brilliancy prize eligibility for an upcoming event, please send us games that show fight, fortitude, creativity and guts. Well fought draws certainly qualify, and even certain losses fought with vigor and honor may be given consideration. FM Paul Whitehead and GM Nick de Firmian will judge the games, so please submit games that are in the true spirit of the award. The games do not have to be GM level and they do not have to be perfectly played games, far from it. We just ask that they are a game that you yourself are proud of, of any level of player.

I offer two real life example of brilliancy prize winners. Incidentally, they both involve me playing in the same event in 1988. In one, I was the victor, the other, I was the victim. I defeated my first master, John Bidwell, by being lucky and good at the right time. I was an Alekhine's Defense player as black and was familiar with it and he played it against me and made a slip where i took advantage. The loss was one in which I was riding high after my win and felt like I was on my way to two upsets in a row, but then it all fell apart as I was done in by the fearless and relentless attacking of Neil Regan. It is certainly a blast from the past for me. These games were when I was 15 years old and found in the California Chess Journal July 1988. Thank you to Kerry Lawless and the Chess Dryad http://www.chessdryad.com/ for the preservation of California chess history. 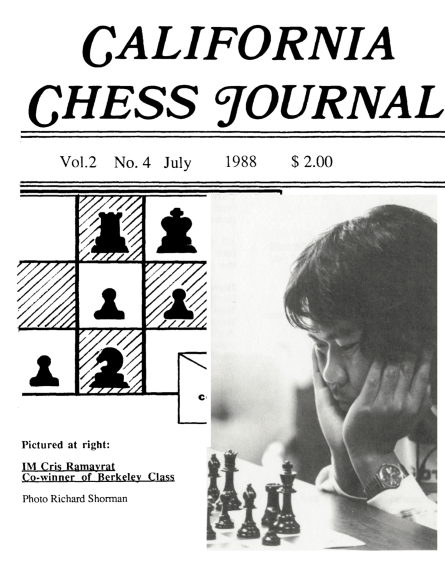 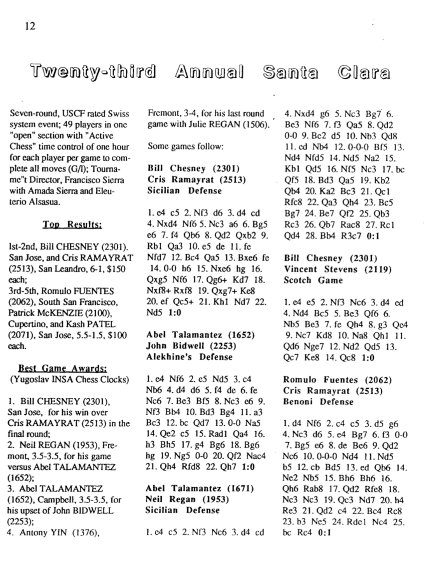 Come out for a fun and exciting weekend! Top 10 Boards are broadcasted via DGT. Register TODAY to save your spot and the late fee! Hope to see many of you that weekend!

Closing the year 2019, we would love to hear your feedback and suggestions regarding the last 12 months. We have developed a short, 5-questions survey, which was available for our TNM players and anyone who visits the chess club.
We also have a slightly expanded version of this survey that is available online:  https://forms.gle/GXjnT7Dgx2bGdXo76
Thank you for your time and energy to provide feedback. 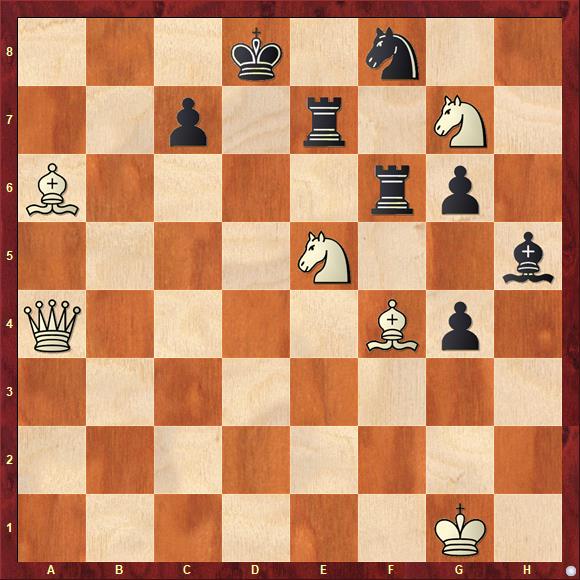 Fun event is planned for the end of the year! Come out for a 5 round kids' tournament, where players can practice their skills, have fun and win some trophies!
More information: https://www.milibrary.org/chess-tournaments/end-2019-mechanics-institute-scholastic-swiss
Register online to save your spot: https://mechanics-institute.jumbula.com/Tournaments2019/EndofYear2019MechanicsInstituteSeptemberScholasticSwiss