Yudacufski TNM Cancelled and Chess Room Due To COVID-19

Following on the advice of public and health officials regarding best practices surrounding COVID-19, Mechanics' Institute (MI) has closed the chess room, library, and meeting rooms to the public through March 31, 2020. Therefore, our current TNM is cancelled until further notice. The first round that was played last week has been submitted for rating to both USCF and FIDE, and we gave full refunds or credit to all players. Those who have registered online should see the credit on their account. If a player would like a refund rather than a credit, please email us at [email protected], and we will process the request.

We intend to stay on the same timeline as our regularly scheduled TNM's. For example, if in three weeks we are able to reopen the chess room, and there would have been three rounds left in the TNM, we will fill those three weeks on Tuesday nights with chess programming until the regularly scheduled start of the next TNM. Because the TNM is FIDE-rated, there are certain event registration requirements that do not make it simple to reschedule or change dates. We may for example choose to hold in those three gap weeks a three-round mini tournament, a one-day rapid tournament, an evening of quads, etc. We will keep our players and club participants informed of any developments through our Facebook page, emails, and this newsletter, so please make sure you are connected to all platforms wherever possible. We also will continue our broadcasts on Tuesday evening to discuss developments and happenings in the chess community and chess world.

We want to thank all our players and our chess community for their very strong support in this time, as well as the leadership of the Mechanics' Institute for their support of the club.

For full standings from round 1, please follow the link here

Since our MI chess room, along with our library and meeting rooms, has been closed due to COVID-19 concerns and public health recommendations, we are looking at the possibility of continuing our Tuesday night club activities online. During this time period, we are organizing online tournaments through Chess.com platform. Players would need to join the Mechanics' Institute chess club group on Chess.com, which can be done by following this link here.

Once you are part of the Mechanics' Institute Club on Chess.com, you will be able to register for online club tournaments that we organize. Next Tuesday, we will do a test run: we are planning for a four-round G/15 +2 tournament that would happen during next Tuesday, in one day. Please note that this will not be USCF rated at this time, and it will be a free event. It will start at 6:30pm, the usual TNM start time. For the first time, we will have have one open section, so anyone can register. We are capping the number of players at 60. Hopefully this will give everyone a chance to participate. The system will take player's Chess.com rating and pair using that rating. Unfortunately, we cannot adjust these ratings, so if you want to have higher rating opponent with whom to be paired, you have a few more days to play some games online.

To join the tournamnet, simply click on this link: https://www.chess.com/live#t=1157540 and once registration opens, please click on Join. We will provide more information to players via our Facebook page and email. After the first test tournament, our plan is to have these tournaments USCF quick-rated, as is the practice for USCF for online tournaments played on Chess.com. The details will be shared as we go forward.

For those players worried about fair-play concerns, Chess.com uses a very accurate and respected algorithm to detect possible fair play violations, and all games go through this algorithm. As you probably are aware, there have been many instances in which this algorithm caught cheaters and banned them from playing online again. As the organizers of the tournment, we will be notified if there are any issues, and both MI and Chess.com will address them accordingly. Please remember that these games would be USCF quick rated, and would not affect a player's standard rating. Our main goal is to bring our players together through chess in a creative way amidst these uncertain times. Please be patient with us as we attempt to organize this online tournament.

We wanted to let the chess community know what the chess club, tournament, and classes will be closed through the end of March, set to re-open on April 1, 2020. Here is a quick summary of what is affected by the closure:

We have cancelled ALL tournaments through March, including the scheduled IM Vince McCambridge championship March 21, and the SF Scholastic Championship in Golden Gate Park March 28. Both events will be rescheduled later this year. As of now, events in April are on, though we will inform our chess community if there are any changes to this schedule.

All scheduled classes at MI are cancelled, including the weekday classes of GM Nick de Firmian, FM Paul Whitehead, as well as the weekend kids and women's classes.

We have cancelled all after-school classes, following the advice and directive of public health officals and the schools themselves.

Please let us know if you have any questions, email us: [email protected]

We wanted to let our players and parents know that we have done a complete cleaning of all the chess tables and put down new pieces for all the tables in the club. MI will also be conducting a thorough deep cleaning throughout our building. Therefore, when the club re-opens, everyone can rest assured they will be in a clean environment, ready to resume the great history of the Mechanics' Institute chess club!

The years 1976 and 1977 were breakthrough years for me.  I was starting to play stronger players with more confidence: they were only human after all.  In ’76 I beat a few weak masters, and my rating hovered just under 2200.  My fighting spirit was strong, but my play was erratic and immature.  By 1977 I was starting to hit my stride. I had gained more experience, and my rating crossed the 2300 mark.

The following 4 games showed that I could mix it up with some of the best in the country, even if the full point was still out of reach… most of the time.

IM Jack Peters has had a terrific career in chess, and I caught him on a really, really bad day.  Our game was played at the Paul Masson vineyards, and it was either the heat or the grape that induced his horrible blunder… but these stories are what can give chess such enjoyment!

A great see-saw battle! As usual white was at a loss in the opening, and invited a repetition (9.Bb5+ and 10.Bc4). Black, outrating his opponent by 400 points or so, plays for the win with 12...c6. However, this didn't work out so well, and white's energetic advance of the d and h pawns rocked black back on his heels. A desperate exhange sacrifice starting with 30...Na3+ was mistakenly accepted with 31.Ka1. After further ups and downs an exciting game ended in perpetual check. 1.e4 d5 2.exd5 Nf6 3.Bb5+ Bd7 4.Bc4 Bg4 5.f3 Bf5 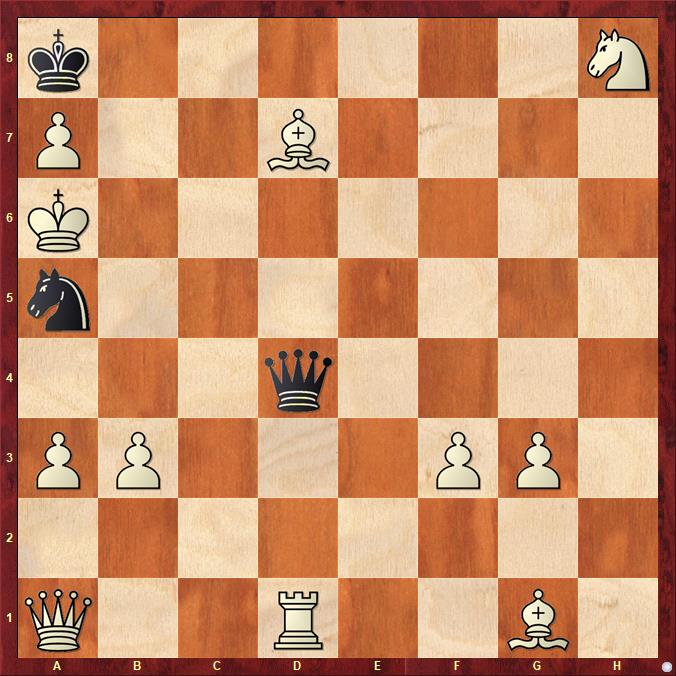 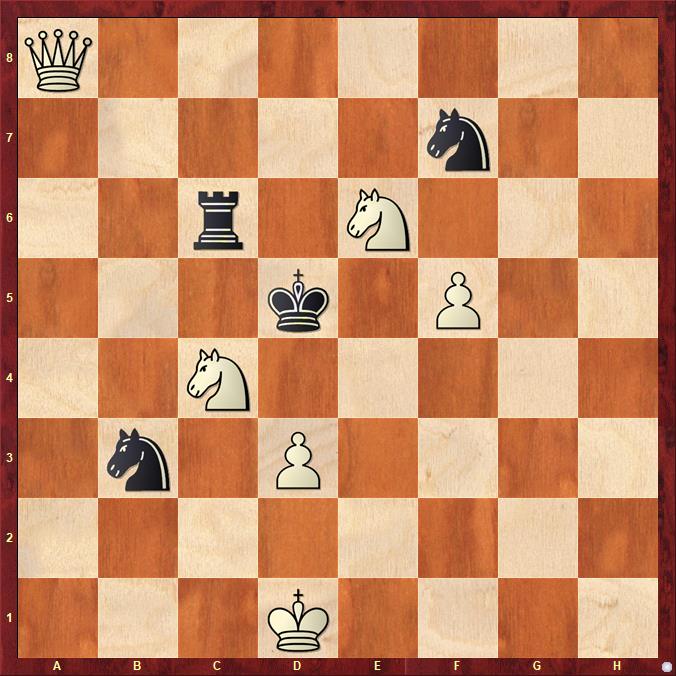 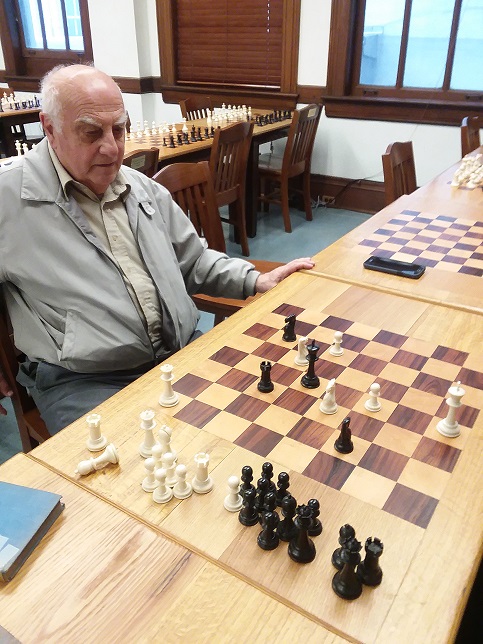 March 17 is the official opening of the long awaited Candidates Tournament. This promises to be a great event with top players of the last decade vying to challenge Magnus. They are all excellent players, but Fabiano Caruana and Ding Liren are regarded to be the favorites. The others certainly have a chance though. We will investigate a candidate weekly, and we start with Alexander Grischuk of Russia. He has been a top player for 15 years, and is one of the oldest participants now at 36 years old. He has already played 4 times in the Candidates Tournament and reached the finals in 2011. He is currently ranked #4 in the world, so it would not be too surprising to see him finally break through to gain a World Championship match.

His major problem is his time management, as he tends to think deeply yet leaving himself with a hard situation to make the time control. One wonders if his opponents in their 20’s will make that a practical issue. The fact that Grischuk is an excellent blitz player mitigates this problem, but he will not win the event if he gives away even a couple of half points in time pressure. I can personally see him winning the Candidates if the winning score is not too high and he finds extra motivation this time.

Black will gain the pawn back after 44...Kxf6, but easily loses the king ending (after 45. Kh4) since the two white queenside pawns hold back 3 black pawns. 1-0